You have reached the cached page for https://www.yidio.com/movie/i-now-pronounce-you-chuck-and-larry/26705
Below is a snapshot of the Web page as it appeared on 11/3/2020 (the last time our crawler visited it). This is the version of the page that was used for ranking your search results. The page may have changed since we last cached it. To see what might have changed (without the highlights), go to the current page.
You searched for: +i now pronounce you chuck & larry movie online free We have highlighted matching words that appear in the page below.
Bing is not responsible for the content of this page.
Watch I Now Pronounce You Chuck and Larry Online | 2007 Movie | Yidio

Watch I Now Pronounce You Chuck and Larry

"They're as straight as can be, but don't tell anyone."
Add to Watchlist

“I Now Pronounce You Chuck and Larry” is comedy starring Adam Sandler and Kevin James as two New York firefighters that have been best friends since they were growing up together in Brooklyn. Chuck (Sandler) is a ferocious womanizer while Larry (James) is widower that is struggling to raise a daughter and an effeminate son who acts in a slightly disappointing manner to Larry though he loves him.

Following a terrible accident in which both Chuck and Larry are seriously injured, Larry becomes concerned about the welfare of his two children if he died in the line of duty. Though it takes a lot of convincing Chuck eventually agrees to help Larry out by entering into a fraudulent gay marriage in order for Chuck to become the primary beneficiary for Larry’s kids. They enlist the help of a lawyer (Jessica Biel) to help defend their marriage. They attempt to keep their marriage quiet and away from their fellow firefighters but after a fight outside of gay costume party involving protesters, it’s impossible to hide it.

Chuck and Larry are shunned by their co-workers and hounded by city fraud detection agent (Steve Buscemi) who is determined to uncover their lie. Outside of helping another firefighter (Ving Rhames) come out to his parents, Chuck and Larry’s relationship becomes strained due to the pressure of keeping the truth from being discovered. Only after there is a petition to have the two transferred from the firehouse do they begin to reconcile and realize the persecution that many homosexuals deal with on a daily basis.

Chuck’s womanizing past causes their marriage to be tried to prove its legitimacy and just as they are about to kiss their chief (Dan Aykroyd) reveals their hoax but offers himself as an accomplice who should also be arrested. Their fellow firefighters also offer themselves as accomplices and through they are all arrested, an agreement to appear in an AIDS benefit calendar allows them to have their sentences dropped.

I Now Pronounce You Chuck and Larry is an Comedy, Romance movie that was released in 2007 and has a run time of 1 hr 50 min. It has received mostly poor reviews from critics and viewers, who have given it an IMDb score of 5.9 and a MetaScore of 37.

More Like I Now Pronounce You Chuck and Larry

Just Go with It 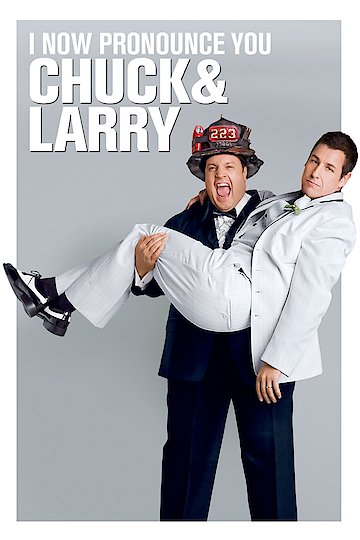 You Don't Mess with the Zohan

The King of Queens

Kevin James: Never Don't Give Up