You have reached the cached page for https://boords.com/film-treatment-template
Below is a snapshot of the Web page as it appeared on 12/8/2021 (the last time our crawler visited it). This is the version of the page that was used for ranking your search results. The page may have changed since we last cached it. To see what might have changed (without the highlights), go to the current page.
You searched for: +how to write a summary of a movie template We have highlighted matching words that appear in the page below.
Bing is not responsible for the content of this page.
How to Write a Film Treatment (Step-by-Step Guide with Template) | Boords
Resources
/
Filmmaking Templates

If you're a budding screenwriter or filmmaker with a great idea for a project, the next step is telling people about it. You can tell people about your idea by writing a script, but you might want to write a film treatment, too. It's all part of the screenwriting process.

In this post, we’ll explain what a film treatment is, how you can write your own, and show you some examples from the pros.

What is a film treatment?

A film treatment (or film script treatment) is a multi-page, detailed synopsis of your film or visual project. It contains all the key elements of your film, like important scenes, main characters, and crucial plot points. And it’s written in prose, not as a script.

Essentially, it’s your whole story but broken down into one simple document – a roadmap for a reader, producer, or writer. Anyone who picks it up – agents, executives, your pals – should understand (and love!) the story immediately.

Your screenplay treatment needs to sell your story. And with some hard work, it’ll do exactly that.

Why do you need a film treatment in script writing?

In filmmaking, lots of screenwriters find treatments to be a useful marketing tool when they’re trying to sell their work to Hollywood bigwigs. They’re a vital part of the development process, helping you to stress-test your story idea before writing a draft screenplay.

Another benefit of writing a script treatment is that it helps you to pin down the tone of your movie or TV show. It’s a way to explore your story’s world before you open up your screenwriting software and start grinding away at your script.

As Terry Rossio says, “There is no way to write an effective treatment… yet there are effective techniques that should be used to write them.” Once you’ve cracked the art of writing treatments, you’ll have something you can use in a bunch of different scenarios.

How long should a film treatment be?

While there are strict rules for how long a spec script should be, film treatments can vary quite a lot. In essence, your treatment needs to be short enough to be snappy and engaging, but long enough to cover all the plot points and sell the story.

If you’re writing without a specific audience in mind, then a ten-page document is a sensible length for a film or series treatment. If you’re writing your treatment for someone specific – like a reader at a production company – then screenwriter John August suggests asking them exactly what they’re looking for. Sometimes readers have a certain page count (i.e. level of detail) in mind.

But, like we said, there are no hard and fast rules. James Cameron, for example, is known for writing whopping 70-page film treatments. His treatment for Terminator is definitely worth a read… if you’ve got some time to spare.

What should you include in a film treatment?

In terms of formatting, you should write your treatment in the same way that you would write a present-tense short story. It needs to include the key plot points and give a flavour of the tone you’re shooting for, but it shouldn’t be overly stylised – like a novel, for example.

Your treatment doesn’t need to include the whole story, so it’s a good idea to cut out non-critical subplots. You should aim for something that outlines your basic three-act screenplay structure but without the screenplay format. Stick to the meat of the story and the main characters. It’s also a good idea to write your treatment in screenwriting software. You’ll need to turn it into a script format eventually, and it also plays nice with production software.

The writing process for a film treatment is as simple as taking each heading and expanding on it. You’ll have a treatment in no time at all.

Once you’ve got a first draft of your script treatment together, it’s time to show it to some people. Hold off on sending it to production companies until you’ve had a friend or family member cast an eye over it, though. They might have some helpful tips to tighten it up before it’s in front of half of Hollywood.

There aren’t many examples online, but reading these film treatment examples from some leading TV and film directors should help you get a feel for what’s involved.

Fired up and ready to write your film treatment? Download our free template below to get started. 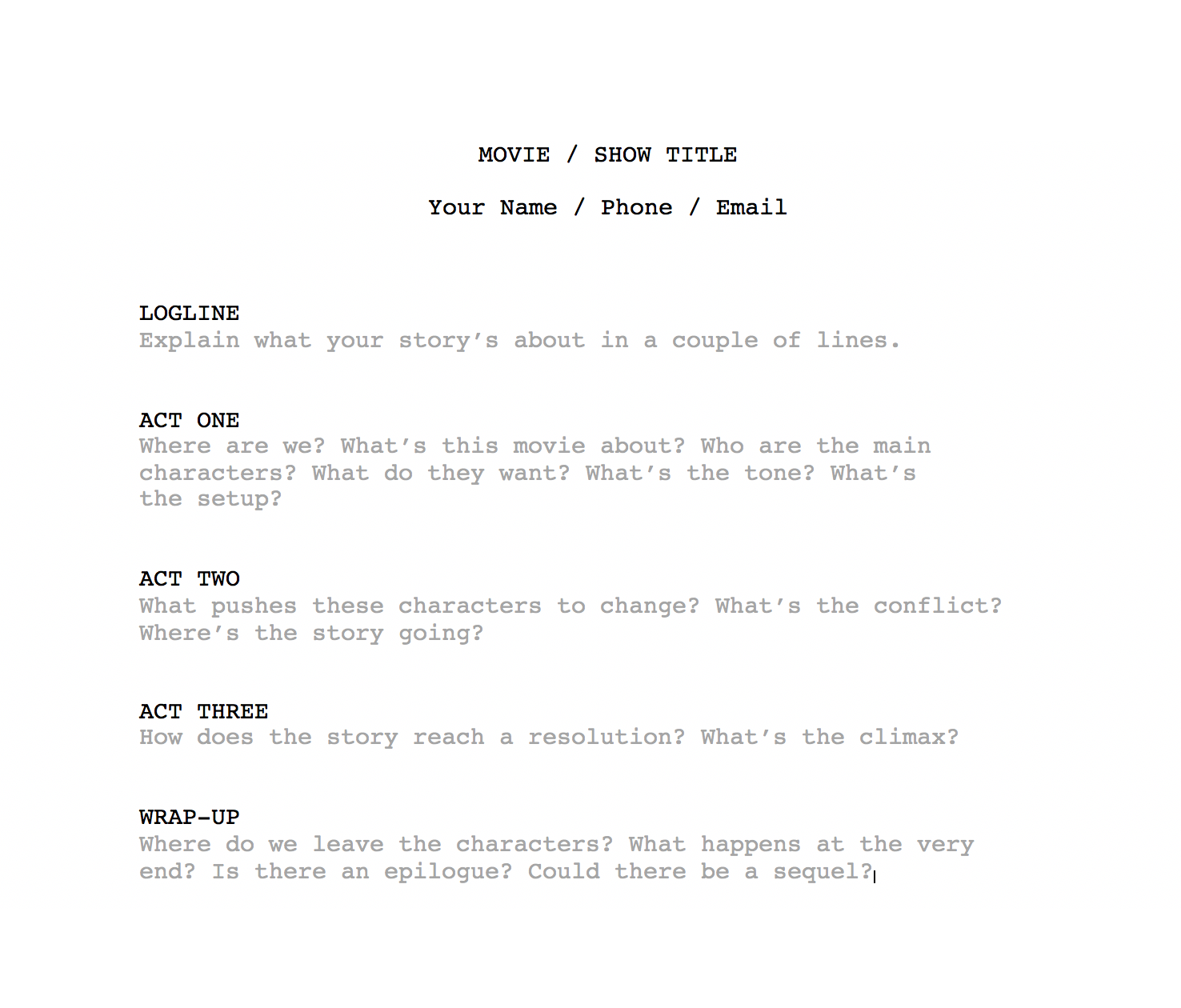 Microsoft Word Film Treatment Template
Get our film treatment template (as a free download) to quickly summarise your next film project.
Read Next
Find Your Perfect Story Structure in Three Acts
If you’ve ever tried to write a story, you know it’s pretty hard. Nailing that plot structure. Crafting believable characters. But, if you’re clued up on the rudiments of classic story structure, it can be easy. Or, at least, a little easier.
How to Write a Logline
Before you start work on your Hollywood-busting screenplay, you'll need a logline. It's a one-sentence summary of your movie that entices someone to read the entire script.
The Pre-Production Process Explained
Pre-production includes the creative and logistical work needed before shooting a film, TV show or video. Explore each step in the pre-production process.

Storyboarding and animatics for modern video teams. Get organized, produce your best work.