You have reached the cached page for https://military.wikia.org/wiki/Order_of_the_Dragon
Below is a snapshot of the Web page as it appeared on 1/26/2021 (the last time our crawler visited it). This is the version of the page that was used for ranking your search results. The page may have changed since we last cached it. To see what might have changed (without the highlights), go to the current page.
You searched for: +hermann ii count of celje t We have highlighted matching words that appear in the page below.
Bing is not responsible for the content of this page.
Order of the Dragon | Military Wiki | Fandom

The Order of the Dragon (Latin language: Societas Draconistarum, literally "Society of the Dragonists") was a monarchical chivalric order for selected nobility,[1] founded in 1408 by Sigismund von Luxembourg who was King of Hungary (r. 1387–1437) at the time and later became Holy Roman Emperor (r. 1433–1437). It was fashioned after the military orders of the Crusades, requiring its initiates to defend the cross and fight the enemies of Christianity, in particular the Ottoman Empire.

The Order flourished during the first half of the 15th century, primarily in Germany and Italy. After Sigismund's death in 1437, its importance declined in Western Europe. However, after the Fall of Constantinople in 1453, it continued to play a role in Hungary, Croatia, Albania, Serbia and Romania which bore the brunt of the Ottoman incursions. The Prince of Wallachia Vlad II Dracul, father of Vlad the Impaler, took his name from the Order of the Dragon.

Sigismund faced fierce struggles for power leading up to the foundation of the order in 1408. In 1387, the Bohemian royal son Sigismund of Luxembourg was elected King of Hungary and Croatia,[2][3][4] a title which he owed chiefly to his marriage to Queen Mary of Hungary in 1385. During the next decade, he constantly sought support or employed ruthless methods to strengthen his unsteady hold on the throne. His rule was weakened in 1395 when Mary, who was pregnant, died in a horse riding accident. In 1389, the Ottoman Sultan Murad I fought Lazar, Prince of Serbia at the Battle of Kosovo Polje, in which both leaders died, leading to an uncertain outcome of the battle. Two years later, the Turks had taken the Bulgarian fortress of Nicopolis.

In 1396, Pope Boniface IX proclaimed a crusade against the Ottomans, and a campaign was organised to liberate Bulgaria from the Turks, save Constantinople, and put a halt to the Ottoman expansion. Sigismund was nominally in charge; however, in the 1396 Battle of Nicopolis the French leader, John of Nevers, commanded the French half of the forces and ignored Sigismund's entreaties by charging the Turks. About 12,000 crusaders died with only a few leaders, including Sigismund, escaping. Sigismund returned to Hungary in 1401 and, facing a number of revolts, gradually resumed control and re-asserted himself as the King of Hungary. This was achieved by allying himself with the political party of Stibor of Stiboricz, Nicholas II Garay, and Hermann II of Celje, in return for their military support, which enabled him to fight off domestic rivals. Sigismund campaigned against the Croatian nobility which culminated in 1408 with the Battle of Dobor in Usora.[5] In the aftermath of this battle, and events unfolding in what is known as the Bloody Sabor of Križevci, 171 members of Bosnian nobility were also massacred. His pact with Hermann II was secured in 1408, when Sigismund married Herman II's daughter Barbara von Cilli (also called Cilli).

On December 12, 1408 Sigismund and his queen, Barbara von Cilli, founded the league known today as the Order of the Dragon.[6][7] Its statutes, written in Latin, call it a society (societas) whose members carry the signum draconis (see below), but assign no name to it. Contemporary records, however, refer to the order by a variety of similar if unofficial names, such as Gesellschaft mit dem Drachen, Divisa seu Societas Draconica, Societas Draconica seu Draconistarum, and Fraternitas Draconum.[8] It was to some extent modelled after the earlier Hungarian monarchical order, the Order of St. George (Societas militae Sancti Georgii), founded by King Carol Robert of Anjou in 1318.[7] The order adopted St. George as its patron saint, whose legendary defeat of a dragon was used as a symbol for the military and religious ethos of the order.

The aim of the order was to fight the Ottoman Empire, defend the Hungarian monarchy from foreign and domestic enemies, and the Catholic Church from heretics and pagans. It also included foreigners (and non-Catholics), such as the Orthodox Serbian ruler Stefan Lazarević and the Wallachian rulers.[5]

The primary representatives of "the perfidious Enemy" remained the Ottoman Turks, who continued to be a problem for Sigismund's successors. The Order's outward focus on foreign threats was also aimed at achieving a level of domestic cohesion. The statutes go on to describe the order's symbols of the ouroboros and the red cross, which were worn by its members and gave the order its corporate identity (see below). They also list the mutual obligations of the king and his nobles. The members were to swear loyalty to the king, queen, and their future sons and to protect the royal interests. Boulton argues that "the Society of the Dragon was clearly intended to serve [...] as the institutional embodiment of the royal faction its founder had created".[6] In return for their services, the nobles could expect to enjoy royal protection, honors, and offices.

The creation of the order was an instance within a larger fashion of founding chivalric orders during the 14th and early 15th centuries, not infrequently dedicated to organizing "crusades", especially after the disaster of the Battle of Nicopolis (1396). Sigismund's order was particularly inspired from the Order of Saint George of 1326.[7] Another influential model may have been the Sicilian Order of the Ship, founded in 1381.

The statute of the Order, which was expanded by Bishop Eberhard of Nagyvárad, chancellor of Sigismund's court, survives only in a copy made in 1707,[7] which was published in an edition in 1841.[9] The prologue to these statutes of 1408 reports that the society was created:

in company with the prelates, barons, and magnates of our kingdom, whom we invite to participate with us in this party, by reason of the sign and effigy of our pure inclination and intention to crush the pernicious deeds of the same perfidious Enemy, and of the followers of the ancient Dragon, and (as one would expect) of the pagan knights, schismatics, and other nations of the Orthodox faith, and those envious of the Cross of Christ, and of our kingdoms, and of his holy and saving religion of faith, under the banner of the triumphant Cross of Christ...[10]

Symbol and other artifacts[edit | edit source]

The edict of 1408 describes two insignia to be worn by members of the Order:

...we and the faithful barons and magnates of our kingdom shall bear and have, and do choose and agree to wear and bear, in the manner of society, the sign or effigy of the Dragon incurved into the form of a circle, its tail winding around its neck, divided through the middle of its back along its length from the top of its head right to the tip of its tail, with blood [forming] a red cross flowing out into the interior of the cleft by a white crack, untouched by blood, just as and in the same way that those who fight under the banner of the glorious martyr St George are accustomed to bear a red cross on a white field...[10]

The dragon described here, with its tail coiled around its neck, bears comparison to the ouroboros. On the back of the dragon, from the base of the neck to the tail, is the Red Cross of Saint George, with the entire image on an argent field. The Order's dragon emblem has not survived in any original form, but it has been referenced on coins, art, and in writing. An embroidered badge from c.1430 is found at the Bavarian National Museum.[11] A University of Bucharest annotation to the original edict reads "O Quam Misericors est Deus, Pius et Justus" (O how merciful is God, faithful and just), which may have been officially part of the emblem. The various classes of the order had a slight variation of the dragon symbol. Common changes included the addition of inscriptions like O Quam Misericors est Deus ("Oh, how merciful God is") and "Justus et Paciens" ("Just and patient"). One of the highest classes may have worn a necklace with a seal, while a period painting of Oswald von Wolkenstein depicts another type of class variation.[12]

Few historical artifacts of the Order now remain. A copy, dating to 1707, of the statutes of 1408 is the oldest known literary artifact of the society. Today, known materials are archived within the University of Budapest.

Members of the order are referred to in the statutes as barons (barones, occasionally socii). They were mostly Sigismund's political allies and supporters, who were at first largely confined to the political factions of Stefan Lazarević, Nicholas II Garay, and Hermann II of Celje, including such magnates as Stibor of Stiboricz and Pippo Spano.[7] The initial group of inductees for Sigismund's Order numbered 21 men,[6] which extended to about 24[7] in 1418.

After some time, Sigismund chose to expand the ranks of the Order. A second group of inductees was initiated between 1431 and 1437.[7] As membership grew, the Order of the Dragon came to have two degrees. There was a superior class, which between 1408 and 1418 wore both the dragon and the cross as the Order's emblem and a more elaborate version afterwards.[7] The second degree had a large number of members, and its symbol was only the dragon.[citation needed]

Following Sigismund's death in 1437, the Order lost prominence. However, the prestigious emblem of the Order was retained on the coat of arms of several Hungarian noble families, including Báthory, Bocskai, Bethlen, Szathmáry, Benyovszky, Kende and Rákóczi.[1]

The 21 original members of the Order of the Dragon were enumerated in the 1408 founding charters. These were, in original order and Latin description:[13][14][15] 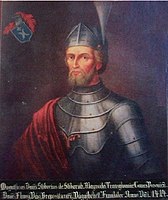 Oswald von Wolkenstein—portrait from the Innsbrucker Handschrift, 1432—wearing the Order of the Dragon chain 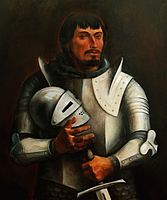 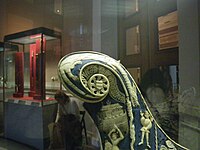 Retrieved from "https://military.wikia.org/wiki/Order_of_the_Dragon?oldid=5269297"
Community content is available under CC-BY-SA unless otherwise noted.