You have reached the cached page for https://www.rottentomatoes.com/m/gigli
Below is a snapshot of the Web page as it appeared on 3/6/2021 (the last time our crawler visited it). This is the version of the page that was used for ranking your search results. The page may have changed since we last cached it. To see what might have changed (without the highlights), go to the current page.
You searched for: +gigli movie cast We have highlighted matching words that appear in the page below.
Bing is not responsible for the content of this page.
Gigli (2003) - Rotten Tomatoes
Home
Top Box Office
Tickets & Showtimes
DVD & Streaming
TV
News 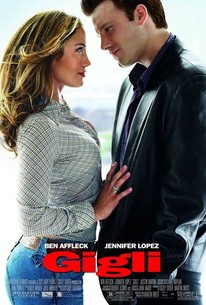 Bizarre and clumsily plotted, Gigli is a mess. As for its stars, Affleck and Lopez lack chemistry. Read critic reviews

Gigli (Ben Affleck) is ordered to kidnap the psychologically challenged younger brother of a powerful federal prosecutor. When plans go awry, Gigli's boss sends in Ricki (Jennifer Lopez), a gorgeous free-spirited female gangster who has her own set of orders to assist with the kidnapping. But Gigli begins falling for the decidedly unavailable Ricki, which could be a hazard to his occupation.

The 10 Most Unintentionally Unsexy Sex Scenes in the Movies
50 Worst Summer Movies of All Time
Total Recall: Ben (Affleck’s) Bits
View All