You have reached the cached page for https://www.entitymag.com/everything-about-gabriel-macht/
Below is a snapshot of the Web page as it appeared on 1/19/2021 (the last time our crawler visited it). This is the version of the page that was used for ranking your search results. The page may have changed since we last cached it. To see what might have changed (without the highlights), go to the current page.
You searched for: +gabriel macht We have highlighted matching words that appear in the page below.
Bing is not responsible for the content of this page.
Who Is Gabriel Macht? 5 Facts About the Actor Behind "Suits" Harvey Specter

Who Is Gabriel Macht? 5 Facts About the Actor Behind “Suits” Harvey Specter 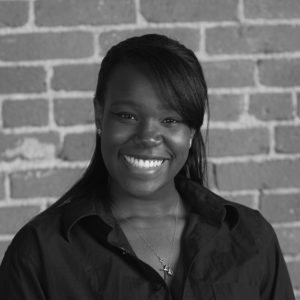 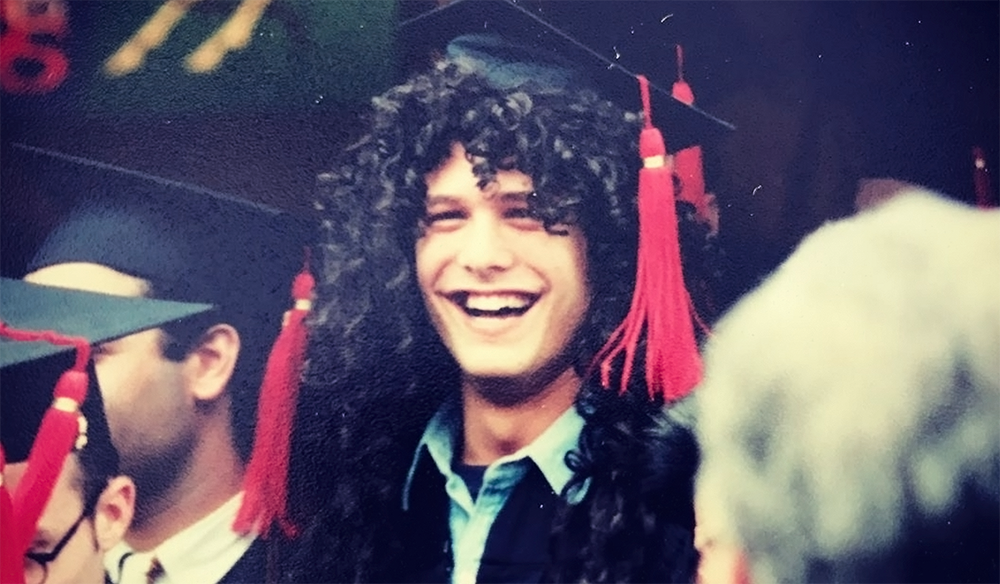 Gabriel Macht might not be a million-dollar lawyer in New York but he’s still as interesting as his “Suits” character, Harvey Specter.

For all “Suits” fans that sometimes can’t stand Harvey, don’t worry. Macht isn’t like him at all. Everything Harvey is – aggressive, attacking and insecure – Gabriel Macht is not. This family man is close with both his parents and prides himself on being laid back and cracking dad jokes.

So, here’s everything you need to know to get acquainted with the “Suits” actor. And trust us, many of these items will surprise you.

1 As we mentioned, Gabriel Macht is a total family man. Seriously. 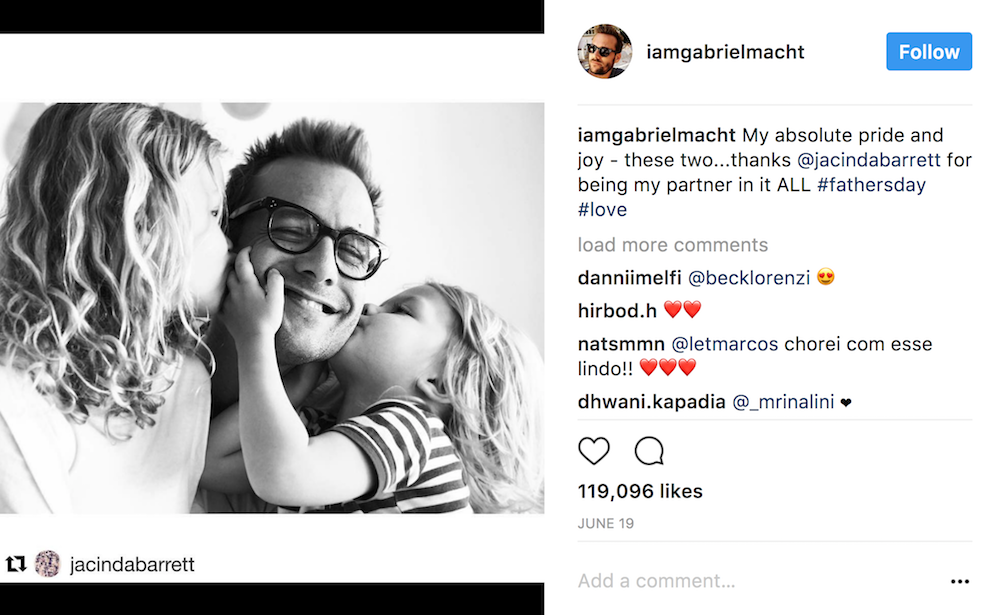 Gabriel has a beautiful young daughter named Satine Anais Geraldine Macht. She’s nine years old and about to cross to the double-digit threshold in August. He also has a son named Luca Macht who turned three in February.

And his partner in crime, marriage and life is none other than the actress Jacinda Barret. You’ve actually seen her on “Suits” before. Does the name Zoe Lawford ring any bells? Maybe not because she was only in three episodes out of the entire series. But for those of you who do remember, her palpable chemistry with Harvey probably makes a lot more sense now.

And while we’re traveling down “Suits” memory lane, do you remember the infamous Harvard ethics professor?

Yes, that one: Henry Gerard. Gabriel apparently likes to put his family in roles he’s familiar with IRL.

Henry Gerard, a father figure for Harvey, was played by Gabriel Macht’s actual father, Stephen Macht. They were both very familiar with the world of law since they have a family full of lawyers. Gabriel Macht spilled these family details in his 2012 interview with Metro, explaining that he never really had to study for Harvey because he was raised around that environment.

2 Gabriel Macht’s net worth is a whopping $8 million.

No, that was not a hallucination. Gabriel Macht, the business man, has about $8 million in assets.

He wasn’t always a successful mogul, though. Right after he graduated from Carnegie Mellon School of Drama, he had a hard time getting jobs.

As he explained in his interview with The Star Online, Macht had to take “intermittent” jobs as an actor. But since his father is also an actor, Gabriel knew how the game worked. Becoming an actor meant taking risks and being dedicated to making it big.

Good thing he kept at it because we’re all thankful for his role in “Suits.”

Gabriel is invested in “Suits” in more ways than one. He’s had to gamble a lot as an aspiring actor, but “Suits” turned out to be his gold mine.

Not only does he act for the show, he also directs from time to time and co-produces it with Patrick J. Adams (Mike Ross). The shows he’s directed are: season four’s “Enough Is Enough” (2015) and season six’s “Borrowed Time” (2016).

According to his interview with The Star Online, he initially did film for 15 years, but realized (like many of us have) that television tends to have better quality writing. So, he started going through TV pilots to see which ones he would like to take a chance on. “Suits” came up and he fell in love.

When he walked into his audition with the casting crew, Aaron Korsh, the show’s creator, immediately liked him. He mentioned that the crew had known that Gabriel was meant to play Harvey Specter since the first episode aired.

But even with all the hype and the support from the show’s casting crew, they gave the role to someone else! Can you all believe it? We were almost without the Harvey we know and love. Thankfully, the other actor passed up on the role so Harvey’s character was immediately offered to Gabriel. 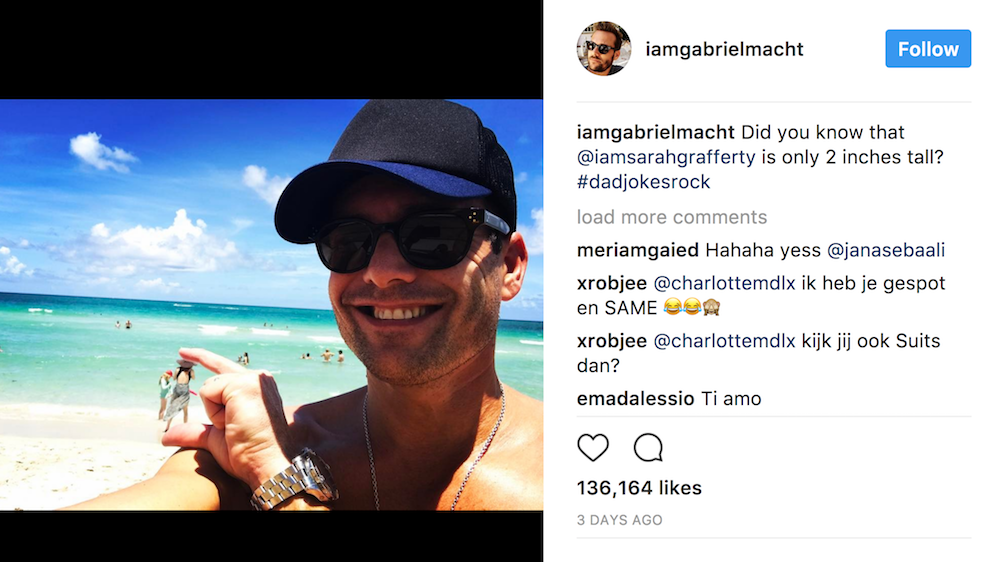 Since Gabriel Macht and Sarah Rafferty are best friends on and off-screen, all of their chemistry makes so much sense now. They’ve had 14 years to build the relationship.

In his Q&A with Blast Magazine, he explains that they met in 1993 at the Williamstown Theatre Festival. He goes on to say, “We go back 20 years and our daughters are best friends, so we lived in the same house [while shooting ‘Suits’ in Toronto]. We are really, really, really close friends. We’ve been to each other’s weddings.”

If you peruse both of their social media accounts, you can see they even go on vacations with one another, as lifelong friends tend to do.

This fun fact comes as our biggest surprise, mostly because it seems so… un-Harvey-like. Gabriel would most likely take that as a compliment since he’s gone on the record multiple times to say that him and Harvey are completely different from one another.

Someone like Harvey would be a medium-rare steak type of guy, one who probably wants the blood to run on his plate so he can smell the kill before he finishes it.

However, Gabriel prefers not to eat steak or any other animal at all. And this is not a lifestyle change he’s made by himself. His wife also follows this same diet and has spoken about how hard it is to stick to it sometimes.

But whether or not the two are similar in personality, you have to admit that Gabriel does live a pretty interesting life, just like Harvey does.

Which Queen of Halloween Are You Based on Your Zodiac Sign?

19 Dad Rock Songs To Jam To This Father’s Day

13 of the Best Quotes From Linda Belcher, Super Mom

7 LGBT Webcomics You Should Add to Your Reading List

From Movies to Mentorship: 5 Lessons From Colin Egglesfield’s Book

Clicker
Send this to a friend