You have reached the cached page for https://www.yidio.com/movie/end-of-watch/36433
Below is a snapshot of the Web page as it appeared on 1/27/2021 (the last time our crawler visited it). This is the version of the page that was used for ranking your search results. The page may have changed since we last cached it. To see what might have changed (without the highlights), go to the current page.
You searched for: +end of watch movie online free We have highlighted matching words that appear in the page below.
Bing is not responsible for the content of this page.
End of Watch Online - Full Movie from 2012 - Yidio

"Every moment of your life they stand watch"
Add to Watchlist

Bringing intrigue and interest to the big screen, End of Watch slams viewers with the action filled lives of two regular run-of-the-mill police officers. End of Watch was directed by David Ayer, and it was later distributed by the production company, Open Road Films. This film’s plot and the clever dialogue were written by a talented writer, who also director the film, David Ayer. In addition, the film was produced by the following: John Lesher, David Ayer, Jake Gyllenhaal, Nigel Sinclair and Matt Jackson. And finally, this film stars many well-known actor and actresses which include the following: Michael Pena, American Ferrera, Cody Horn, Jake Gyllenhaal, Yahira Garcia, Kristy Wu, David Harbour, Frank Grillo, Anna Kendrick, Natalie Martinez, David Harbour and Jamie FitzSimons.

The film brings 109 minutes of laughs and thrills because the genre of the film is action, suspense, drama and a little bit of humor mixed in. It is filmed in documentary style, sort of like cops, and the film captures many of the cop humor and drama that viewers crave.

The plot of the film is centered on two best friends, Brian Taylor and Mike Cavala, who happen to be work partners. These two friends work together in their local police department, the Los Angles Police Department. Brian, a sarcastic and creative guy, decides to start an experiment and, as a result, he puts tiny cameras everywhere: in his partner and his police cruiser, both their uniforms and in addition, he carries a handheld video camera. His supervisors and colleagues don’t like the idea of the small cameras, but Brian Proceeds anyways. These cameras capture everything: the friend’s personal conversations about their personal lives, plenty of cop drama and even the famous donut runs that cops are famous for.

Things get even more complicated when this dynamic duo encounters a trouble making drug cartel. They try and stop them and, as a result, they created a huge enemy. After many threats and encounters, Brian and Mike decide to put a stop to the drug cartel, and take them where they deserve to be; in a cozy cell in jail.

Characters of the film include:

Brian played by Jake Gyllenhaal: Brian is a police officer who works at the LAPD, and his partner is Mike. He is the one who is responsible for setting up the video cameras everywhere.

Mike Cavala: He is Brian’s partner, and he adds a lot of drama to the film.

End of Watch is an Crime, Drama, Thriller movie that was released in 2012 and has a run time of 1 hr 49 min. It has received moderate reviews from critics and viewers, who have given it an IMDb score of 7.6 and a MetaScore of 68.

Where do I stream End of Watch online? End of Watch is available to watch and stream, download, buy on demand at Amazon Prime, Hulu, Apple TV+, The Roku Channel, Starz, Amazon, Vudu, Google Play, Microsoft Movies & TV, iTunes, YouTube VOD online. Some platforms allow you to rent End of Watch for a limited time or purchase the movie and download it to your device.

Browse Amazon Prime!
Browse the latest Amazon Prime from with Yidio!
Browse Now
What are you waiting for?
Click here to try for free!
Do you have Prime Video?
No
Yes
Ad
i
Watch Now with 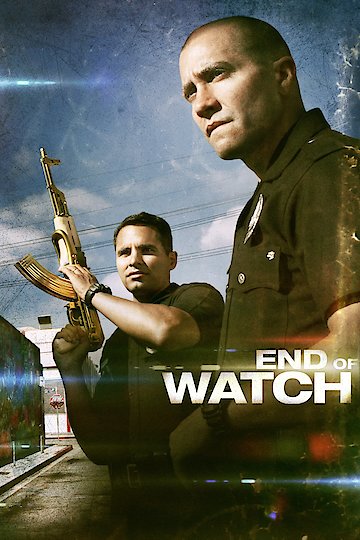 Love and Other Drugs

Prince of Persia: The Sands of Time

The numbers were so close that a victor couldn't be named until Monday, but finally it happened. It was a good weekend for "End of Watch," but you can't say the same for "Dredd."