You have reached the cached page for https://catholicfire.blogspot.com/2015/09/fifteen-fast-facts-about-st-jerome.html
Below is a snapshot of the Web page as it appeared on 1/9/2022 (the last time our crawler visited it). This is the version of the page that was used for ranking your search results. The page may have changed since we last cached it. To see what might have changed (without the highlights), go to the current page.
You searched for: +emperor constantine and christianity facts for adults We have highlighted matching words that appear in the page below.
Bing is not responsible for the content of this page.
Fifteen Fast Facts about St. Jerome Skip to main content 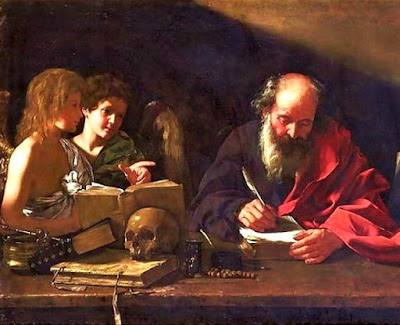 Today is the memorial of St. Jerome. Here are fifteen fast facts about him.

1. St. Jerome is a Father and Doctor of the Church.

2. He was a brilliant scholar, monk, traveller, teacher, letter writer, and consultant to Popes and Bishops.

3. St. Jerome was born in Dalmatia (near Aquileia, north of Rome) around 340 to a wealthy Christian family.

4. At the age of 20, St. Jerome was sent to study in Rome, where he became fluent in Latin and Greek and developed a love for the classical writers.

5. He he acquired many worldly ideas, made little effort to control his pleasure-loving instincts, and lost much of the piety that had been instilled in him at home.

6.  St. Jerome travelled throughout western Europe with a friend but that ceased when he had a conversion experience in Trier and decided to become a monk.

7.  He joined a monastic community in Aquileia in 370, where he met some who would become his close friends and others his enemies.

8. When the monastic community disbanded, St. Jerome decided to go east and he lived for years in the the Syrian desert as a hermit.

9. He studied Hebrew, which he hated, but used it as a distraction against sexual temptations.

10. He was ordained a priest in Antioch and at the age of 40 went to Constantinople, where he met and befriended St. Gregory of Nazianzus.

11. St. Jerome became the secretary of Pope Damasus, who commissioned the Vulgate from him, which took him 30 years to write.

12. His harsh temperament and his biting criticisms of his intellectual opponents made him many enemies in the Church and in Rome and he was forced to leave the city.

13. St. Jerome went to Bethlehem, established a monastery, and lived the rest of his years in study, prayer, and asceticism.

Comments are moderated and are published at the blogger's discretion. 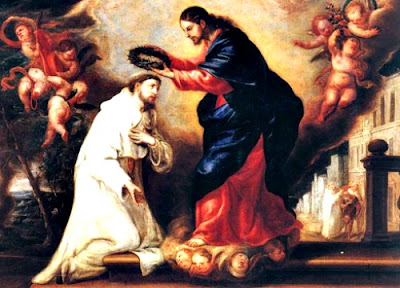 The saint of the day for August 31 is St. Raymond Nonnatus. He is the patron of expectant mothers, midwives, obstetricians, infertile couples, and newborn babies. Raymond was born at Portella, Catalonia, Spain in 1204, the son of wealthy parents. He was delivered by cesarean section when his mother died in childbirth. Hence his name non natus (not born). In his childhood, he seemed to find pleasure only in his devotions and serious duties. His father, sensing that Raymond was drawn to religious life, ordered him to manage one of the family farms. Raymond readily obeyed but spent his time with the shepherds and workers, studying and praying until his father abandoned the idea of making his son a worldly success. Raymond later joined the the Order of Our Lady of Mercy or the Mercederians, which was founded by St. Peter Nolasco, who devoted to ransoming Christians captured by the Moors. He succeeded Peter as chief ransomer and went to Algeria to ransom slaves. He remained as hosta
Read more

The Spirituality and Miracles of St. Clare of Assisi 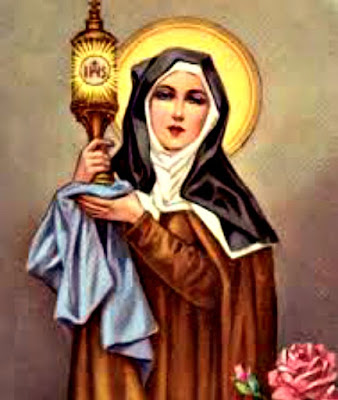 August 11 is the memorial of St. Clare, one of my favorite saints. She was the first woman to follow the life of radical poverty practiced by St. Francis of Assisi and is the co-founder of the Poor Clares. Although I am not a Franciscan, I have had Franciscan friends, clergy, and spiritual directors instruct me on the beauty of St. Clare's spirituality. I have also learned a great deal from reading about her over the years. Clare and Francis (2007) is a film which depicts the fascinating story of her dramatic conversion and surrender to the will of God. St. Clare is the patron saint of television. She is also the patron of eye disorders, embroiderers, good weather, and telephones. The Contemplative Life The Lady Clare was born into a noble family in Assisi in 1193 and was admired for her great beauty. When she heard Francis of Assisi preach his Lenten homilies at the Church of San Giorgio, she was captivated by his words. At age eighteen, she heard him say: "When the
Read more 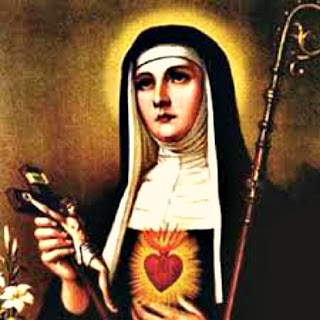 St. Gertrude the Great St. Gertrude was born in Eisleben, Germany in 1256. As a five-year-old, she was received into the monastery of the Cistercian nuns in Helfta. She was an intellectually gifted student with a gentle disposition who applied herself to her studies, concentrating on literature and philosophy. At the age of twenty-six, Gertrude had the first of many visions of Jesus which brought about a deep interior conversion, drawing her into the innermost recesses of His Sacred Heart. Her heart symbolically united in a vision to the Sacred Heart of Jesus, she was a precursor of the later devotion to the Sacred Heart. She also advocated frequent reception of the Eucharist and devotion to St Joseph. Similar to other mystics, such as St. Teresa of Avila, the Passion of Christ was her favorite devotion and when she meditated on it, or on the blessed Eucharist, she was often unable to control the torrents of tears which flowed from her eyes. She frequently went into ecstasy
Read more