You have reached the cached page for https://beesimplyamazing.blogspot.com/2015/06/simply-amazing-books-book-reviews-and.html
Below is a snapshot of the Web page as it appeared on 2/18/2021 (the last time our crawler visited it). This is the version of the page that was used for ranking your search results. The page may have changed since we last cached it. To see what might have changed (without the highlights), go to the current page.
You searched for: +edith frank wikipedia book review We have highlighted matching words that appear in the page below.
Bing is not responsible for the content of this page.
Bee Simply Amazing: Simply Amazing Books (Book Reviews and Recommendations)

If you are a true die-hard and certified bookworm, you will definitely understand how it feels like to be in the depth of despair once you finished a good book and you will feel like the world (that imaginative and fictional world, that full of wisdom and inspirational world and that mysterious world) is about to shatter and end...

Because I sooo LOVE books... I want to share to you these awesome, world shattering and also world-mending, intricate, and SIMPLY AMAZING BOOKS that really turned my life up-side-down...


THE PERSONAL PATH TO VIRTUE by CAROLYN RAGODOS 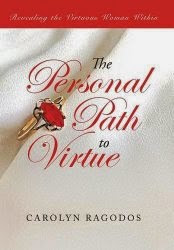 I never fell in love with a book my whole life, until this book came and my entire universe was blown away. This is a book inspired by the Bible entry found in Proverbs 31.What it is to be that virtuous woman of GOD?

The Personal Path to Virtue,” Ragodos says, presents an opportunity to open the deep places of the heart the reader has yet to find, which can lead to healing, restoration, balance, true love, inner value and more. Ragodos offers her knowledge and experience as a missionary, coupled with her understanding of Bible passages, to inspire female readers to reach new levels of self-worth and faith.

This is one of the best Christian books that really inspired me in my Christian walk. This motivates me a lot and encourages me to be still and stay faithful to the One who knows the deepest desires of our hearts and the greatest mourning of it. This book is a BIBLE inspired book, that made this book interesting and it feels like while you're reading it, you can God everywhere and in everything. I soooo love this book that every woman should read this, also men too. 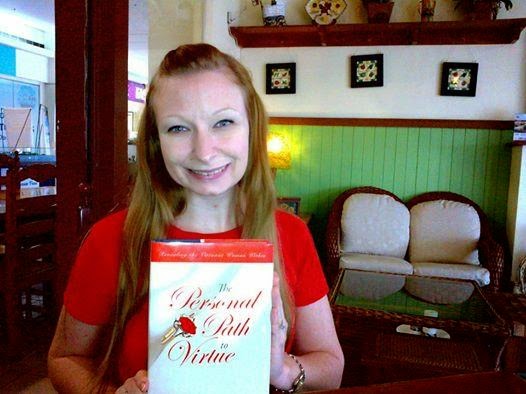 I love it when Mrs. Ragodos say "“With so many difficult and oftentimes devastating events in and around us, this study offers the hope of something more pure and stronger than the poverty of character which prowls our days and nights,” 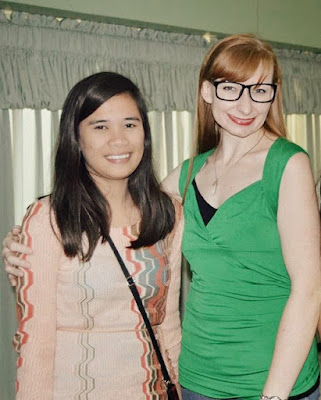 (THE BOOK AUTHOR and ME during the WRITING SEMINAR @ UB...Mrs. Carolyn as guest speaker)


THE DIARY OF A YOUNG GIRL, ANNE FRANK 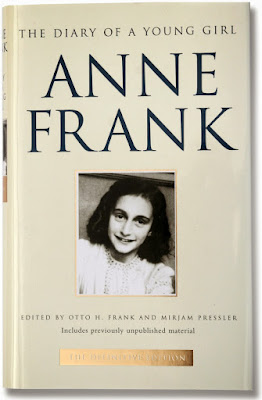 Telling everything to her imaginary friend (diary) named “Kitty” her deepest thoughts, desires, wishes and a lot of things about her experiences, struggles, persecutions from the Germans and even her first love. For two years of  hiding in the secret annex, Anne Frank became more mature and even found her greatest solace in the written word. She even wrote her experience of first love in the midst of war.

Until a German police officer stormed the secret annex and found the Jews hiding there. They arrested them and they were transferred to the Auschwitz death camp in Poland on September 3, 1944. When they arrived at Auschwitz the men and women were separated. And again the two sisters were separated from their mother that caused her illness and death (Edith Frank). Anne and her sister Margot were transferred to the Bergen-Belsen concentration camp where the food was scarce and diseases were very rampant. The sisters both died of Typhus, Anne frank was 15 when she died. Only their father survived. After the world war and the camps were being liberated.

Otto, their father went back to Amsterdam hoping that he could be with his family again but then he was welcomed by that tragic news of his wife and daughters’ death. He then found Anne’s Diary that was kept and saved by Miep Gies. He read the diary and he was mesmerized by the deepness of his daughter’s thoughts and feelings, emotions, wisdom and knowledge.Otto then decided to published his daughter's diary as a book, and The Secret Annex: Diary Letters from June 14, 1942 to August 1, 1944 was published on June 25, 1947 . 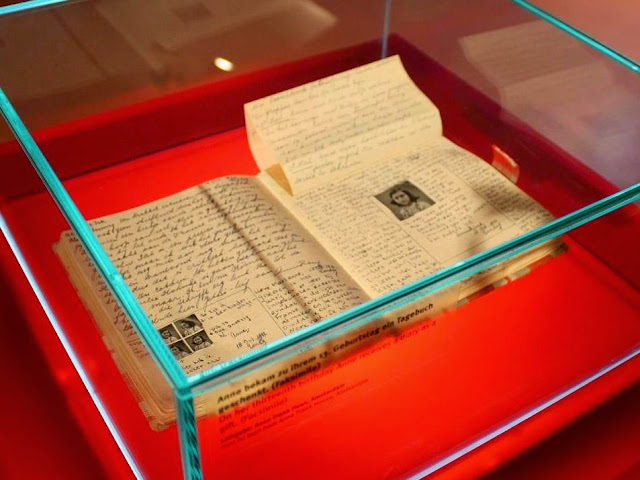 (Facsimile of the diary of Anne Frank on display at the Anne Frank Zentrum in Berlin, Germany.)

THE CITY OF EMBER by JEANNE DUPRAU 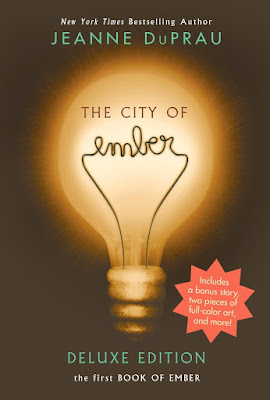 MY BOOK RATING: 4 STARS IN www.goodreads.com

A very interesting, compelling and exciting sci-fi book about an underground city which is called "the City of Ember" designed by unidentified architects referred to as "builders". The city was built with supplies provided for the inhabitants good for 220 years for them to survive living underground while the surface at that time was dangerous because of devastating nuclear wars.

There's is that one locked box that is faithfully passed down from one mayor to the next until the seventh mayor who failed to keep the box but instead tried to open it, died even before  putting the box to it's rightful place and he wasn't able to inform the inhabitants about the importance of the box. "That the box contains the instructions on how the inhabitants  can get out from the underground...

241 years later (exceeding 220 years), the underground city is slowly running out of power and supplies due to its aging infrastructure. The inhabitants still unaware about the box until two young people Lina Mayflee (assigned as Piperworks Laborer) and Doon Harrow (assigned as Messenger) decided to switch jobs because they're both unhappy with their assignments, discovered something that will change their lives forever.

Lina and Doon with few others tried to decipher the letters written in an old piece of paper that Lina's grandma found in a box and figured out that the letters were the instructions written by the "builders" for the inhabitants to find their way out. That lead them to the  greatest adventure in their lives. 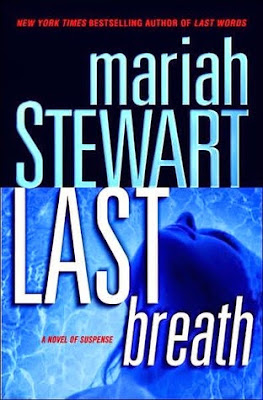 MY BOOK RATING: 4 STARS IN www.goodreads.com

First of all, i think that the title and the cover of this book doesn't seem to relate to the story,(hehehe) but i still liked it. It's a real page turner and absolutely interesting! A quick easy read and thrilling plot. If you love history and archeology, well this BOOK is a good pick! !

First character is Daria McGowan, a professor of archeology/archeologist (his great grandfather is Alistair McGowan a well-known archeologist who discovered a lost civilization, the Shandihar)....(Shandihar is an ancient city somewhere in Saudi Arabia who believes and worship to a goddess they call Erishkegal..)Other character is Connor Shields, an FBI Agent who helped Daria to solve the mysteries of the lost and stolen priceless artifacts her great-grandfather unearthed a century earlier in the Middle East..

Upon searching and trying to retrieve those lost artifacts, Daria and Connor discover a trail of bodies–collectors who have met brutal, bizarre ends at the hands of a mysterious killer (s) whose murderous methods are based on the rituals of an ancient civilization, the cutting of tongue and hands to those who have pissed and trespassed to the sisters and priestess of Ereshkigal...

A good read indeed!You'll enjoy it..


THE BOOK THIEF BY MARKUS ZUZAK 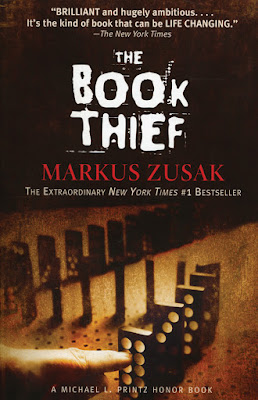 The Book Thief is a novel by Australian author Markus Zuzak. First published in 2005, the book has won numerous awards and was listed on The New York Times Bestseller for over 230 weeks. (Wikipedia)
This is a story of a girl named Liesel Meminger, a nine year-old girl from Germany living during the World War 2. The story is actually narrated by DEATH. It is indeed a very interesting narration that stirs everything including one's perspective, thoughts, ideas, and philosophical sentiments and beliefs.

Liesel was set into a new home with her new mama and papa who took good care of her and educate her. Liesel found her great solace in words, in BOOKS perhaps. Even in the start of World War 2 (Nazi Germany) her love for ideas and written and spoken words never ceases. She learned how to read with her first ever book The Gravedigger's Handbook left on the snow by her brother's own grave-----the first encounter of Liesel and Death actually...

Her foster parents, Hans and Rosa Herbermann are poor German given a small allowance to take her in. She then met Rudy, which became her bestfriend. One night a Jew named Max turns up in their home. Liesel's family received and hid him in the basement, feed him and saved him from the Germans who hate Jews though they know the risk their family is taking.

This book is full of struggles, sorrows, loneliness and heart-wrenching moments that your heart may be unable to cope up. Hehe, well at least for me. The author really made me cry and made me realize at the same time that it is really wrong to generalize and to firmly believe that "nothing good comes out from a country who hates you" because as what the book narrated I mean DEATH narrated, both nations (Germans and Jews and everybody involved) are all struggling in different ways and  if we say life-risk, persecutions, bondage, blindness because of yielding to the majority, and deprivations both parties are called victims of the war...

Inspite of it, the book is also full of passion and dreams (intellectually) and hopes, compassion, unconditional love, and inspirations. A well-written and moving, heart-touching form of literature that is amazingly crafted by the hands of a genius writer who aims to target not only the deepest part of the heart and soul but also the inmost part of one's intellectual treasure box...


THE MEMOIRS OF GEISHA BY ARTHUR GOLDEN 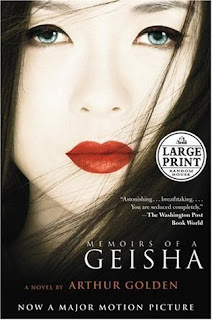 Cherry-blossom delicate, with images as carefully sculpted as bonsai, this tale of the life of a renowned geisha, one of the last flowers of a kind all but eliminated by WW II, marks an auspicious, unusual debut. Japan is already changing, becoming industrialized and imperialistic, when in 1929 young Chiyo's fisherman father sells her to a house in Kyoto's famous Gion district.

The girl's gray-eyed beauty is startling even in childhood, so much so that her training is impeded by the jealousy of her house's primary geisha, the popular, petty Hatsumomo. Caught trying to run away, Chiyo loses her trainee status until taken under the wing of Mameha, a bitter rival of Hatsumomo.

Chiyo flourishes with Mameha as her guide, soon receiving her geisha name, Sayuri, and having her mentor skillfully arrange the two main events vital to a geisha's success: the sale of Sayuri's virginity (for a record price), and the finding of a sugar-daddy to pay her way.

Seeing the implications of Japan's militarism, Mameha pairs Sayuri with the general in charge of army provisions, so that as WW II drags on she and her house have things no one else in Gion can obtain. After the war, with her general dead and others vying for her attention, Sayuri pines anew for the only man she ever loved—an electrical-corporation chairman whose kindness to a crying Chiyo years before altered the course of her future.

Though incomparable in its view of a geisha's life behind the scenes, the story loses immediacy as it goes along. When modern times eclipse Gion's sheltered world, the latter part of Sayuri's life—compared to the incandescent clarity of its first decades—seems increasingly flat. Kirkus Reviews