You have reached the cached page for https://www.harpersbazaar.com/celebrity/latest/a28927328/who-is-dylan-meyer-kristen-stewart-girlfriend/
Below is a snapshot of the Web page as it appeared on 9/10/2021 (the last time our crawler visited it). This is the version of the page that was used for ranking your search results. The page may have changed since we last cached it. To see what might have changed (without the highlights), go to the current page.
You searched for: +dylan meyer We have highlighted matching words that appear in the page below.
Bing is not responsible for the content of this page.
Who Is Dylan Meyer? – Meet Kristen Stewart's New Girlfriend
Today's Top Stories
1
New York Fashion Week's Best Runway Looks
2
What Fashion Insiders Bought for NYFW
Presented by
Facebook x Ray Ban
3
How 9/11 Changed the Fashion Industry Forever
4
Your Sneak Peek at Target's Fall Designer Collabs
5
Beyoncé's Evolution 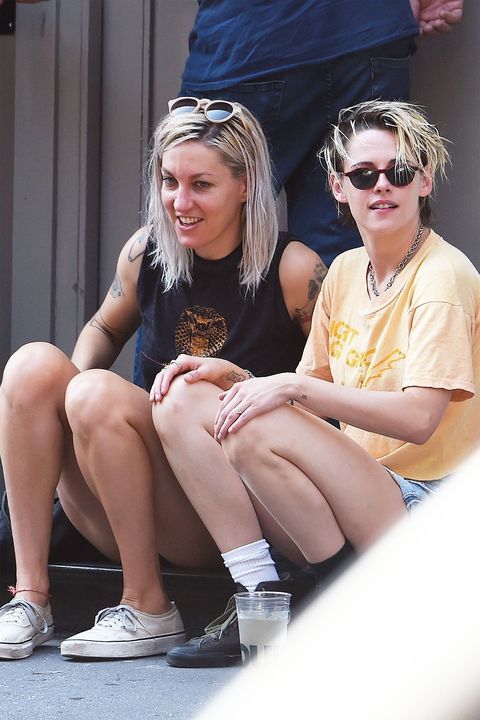 Things seem to be heating up in Kristen Stewart's love life. After being spotted kissing her on-again-off-again girlfriend, Stella Maxwell, in July, Stewart seems to have found someone new to place her affections upon in the form of screenwriter Dylan Meyer.

The two first sparked dating rumors mid-August, when Stewart and Meyer were snapped smooching up a storm on the streets of New York City. Although some speculated that the screenwriter was just a stint during Stewart and Maxwell's off-yet-again phase, a source for E! said otherwise. "Kristen is spending time with Dylan and very happy about it. She was seeing Stella for a little bit while it worked, but now she has moved on with Dylan." The source added that Stewart is "focused" on her bond with Meyer for now.

Also, a quick glance at Meyer's Twitter reveals that the relationship is possibly more serious than the paparazzi photos have let on. "There is nothing like falling in love with someone to make you abruptly aware of all the different dumb/embarrassing/unsolicited directions your hair can go," she wrote.

There is nothing like falling in love with someone to make you abruptly aware of all the different dumb/embarrassing/unsolicited directions your hair can go.

In September, Stewart and Meyer were seen showing PDA once again during the Toronto International Film Festival. This time, the two were seen holding hands on a night out, according to photos published by The Daily Mail.

Things seem to be moving fast between the couple. In a November 5 interview with Howard Stern, Stewart revealed that she's ready to propose and that she already told Meyer she wants to marry her.

Here is everything you need to know about Stewart's new girl.

Meyer has writing credits in films like Loose Ends (2015) and XOXO (2016), which stars Sarah Hyland. She's also worked on the TV series Miss 2059, a sci-fi story about a girl who accidentally finds herself battling in a dangerous galactic tournament. Meyer most recently brandished her writing skills in Rock Bottom, a short film released this past April.

Besides screenwriting, Meyer has dabbled in acting. According to her IMDb page, she held roles in short films like The Death and Return of Superman (2011), Wrestling Isn't Wrestling (2015), and Jem Reacts to the New Jem and the Holograms Trailer (2015).

She and Kristen first met on a movie set six years ago.

Making a guest appearance on radio program The Howard Stern Show, Stewart revealed that she first met Meyer on a movie set six years ago. The two lost contact until Meyer showed up at a mutual friend’s birthday party, where sparks flew.

“The day that I met her, it was like all bets were off,” Stewart said. “I met her years ago on a movie and I hadn’t seen her in six years, and then she rocked up at a friend’s birthday party, and I was like, ‘Where have you been, and how have I not known you?’ She’s been living in L.A. alongside my life somehow but not ever converging.”

They have similar quirks and interests.

"It was so obvious," Stewart added of her connection to Meyer during her Howard Stern interview.

"We're both from L.A. and we really love L.A. We're both kind of like, scumbags. We both felt like trolls as kids. We're so similar but different. She's a writer, she's brilliant," the actress gushed.

Kristen first told Dylan she loved her after two weeks of dating.

During the same appearance on The Howard Stern Show, Stewart revealed the sweet way she told Meyer that she was in love with her for the first time, which was just "two weeks in" after they started seeing each other.

“The first time I told her I loved her, it was really late and we were in some shitty bar and her friends were there or whatever, and they walked out,” she said, “and I was just like, ‘Oh, man, I’m so fucking in love with you.’ Like, done.”

Stewart also revealed that the two have already talked about marriage.

View On Instagram
Chelsey Sanchez Associate Social Media and News Editor Chelsey Sanchez is the Associate Social Media and News Editor for Harper’s BAZAAR, where she covers politics, social movements, and pop culture.
This content is created and maintained by a third party, and imported onto this page to help users provide their email addresses. You may be able to find more information about this and similar content at piano.io
Advertisement - Continue Reading Below
More From Celebrity News
Gigi Hadid Stole the Show at Moschino
Bennifer Look So Damn Chic in Venice
Advertisement - Continue Reading Below
Nobody Does Maternity Style Like Kylie Jenner
Normani Will Perform at the 2021 VMAs
Bennifer Are Back and Getting Cozy in Venice
You Have to See Beyoncé's $6K Martini Glass Clutch
Jennifer Lawrence Is Pregnant!
New Film Brings Prince William and Harry Together
Kobe Bryant's Daughter Shares Her Memories
Olivia Munn Is Having a Baby with John Mulaney