You have reached the cached page for https://nypost.com/2021/08/19/dolly-parton-on-funding-vaccine-something-bad-was-on-the-rise/
Below is a snapshot of the Web page as it appeared on 10/16/2021 (the last time our crawler visited it). This is the version of the page that was used for ranking your search results. The page may have changed since we last cached it. To see what might have changed (without the highlights), go to the current page.
You searched for: +dolly parton vaccine donation We have highlighted matching words that appear in the page below.
Bing is not responsible for the content of this page.
Dolly Parton on funding vaccine: 'Something bad was on the rise'

Dolly Parton thinks she’s getting too much credit for the “small part” she played in developing Moderna’s COVID-19 vaccine.

During an interview with the UK’s Absolute Radio on Tuesday, the 75-year-old country music icon explained that she has been involved with cancer research at Vanderbilt University Medical Center, in her home state of Tennessee, for years.

“I knew something bad was on the rise and I just wanted to kind of help with that,” Parton said of the early days of the coronavirus pandemic, according to the Hollywood Reporter.

“Mine was a small part, of course. I probably get a lot more credit than I deserve,” she said of her $1 million donation toward the cause. “I was happy to be a part of that and to be able to try to stop something in its tracks that’s really become just such a monster for all of us.” 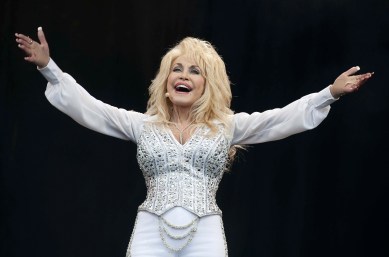 The country music legend announced her contribution last year — and followed up by broadcasting herself receiving the first dose of Moderna’s messenger RNA vaccine with researcher and longtime friend Dr. Naji Abumrad.

“My longtime friend Dr. Naji Abumrad, who’s been involved in research at Vanderbilt for many years, informed me that they were making some exciting advancements toward research of the coronavirus for a cure,” she told Absolute Radio.

As part of her campaign to get shots in arms, the “Jolene” singer — who recently announced she has written an upcoming novel with noted author James Patterson — also repurposed her beloved hit song to promote the vaccine, replacing the name Jolene in the refrain with “vaccine.”