You have reached the cached page for https://www.imdb.com/title/tt0115238/
Below is a snapshot of the Web page as it appeared on 2/24/2021 (the last time our crawler visited it). This is the version of the page that was used for ranking your search results. The page may have changed since we last cached it. To see what might have changed (without the highlights), go to the current page.
You searched for: +dead man's walk We have highlighted matching words that appear in the page below.
Bing is not responsible for the content of this page.
Dead Man's Walk (TV Mini-Series 1996) - IMDb
Get a sneak peek of the new version of this page.
Check it out now Learn more
FULL CAST AND CREW | TRIVIA | USER REVIEWS | IMDbPro | MORE LESS
0Check in
X I'm Watching This!
Keep track of everything you watch; tell your friends.

After surrendering to the Mexican army, the expedition's captors march them across 500 miles of desert to New Mexico.

Young Texas Rangers Woodrow Call and Augustus McRae join with military expedition whose goal it is to annex Sante Fe on behalf of the new Texas Republic.

A series of disasters overtakes Colonel Cobb and his ambition to annex Sante Fe including dust storms, prairie fires, Indians, and the Mexican army.

Who Are This Year's Double Golden Globe Nominees? 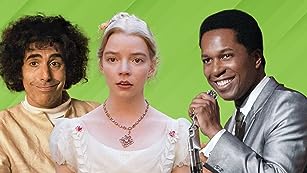 We've highlighted the actors starring in multiple movies and shows nominated for Golden Globes in 2021.

2021 Golden Globe Nominees In and Out of Character

Check out our gallery of the 2021 Golden Globe nominees in the leading and supporting acting categories, as the characters they so brilliantly played and in real life

In this prequel to "Lonesome Dove", two young men join the Texas Rangers unit that's on a mission to annex Santa Fe.

While most of the characters in this are fictional, William "Bigfoot" Wallace was a real person, he is one of the most famous real life Texas Rangers. In real life he survived the "Black Bean Incident" and went on to command his own unit of Texas Rangers. He later participated in the Mexican-American War Battle of Monterrey and the Comanche Wars. During the Civil War he helped defend the Texan frontier against Comanche attacks. He actually survived all these battles and died of natural causes in 1899 at the age of 82. See more »

There are several firearms throughout the mini-series that should not be there as they didn't exist at the time. Bigfoot Wallace was using a Remington model 1858 rifle, but as the model name indicates that rifle was not available until 1858, Dead Man's Walk takes place in 1842. Several people, including Captain Salazar and Gus, are seen using Colt Walker revolvers, but they were not available until 1847. See more »

Capt. Salazar: I am slmost out of ammunition. If you send us back with no horses and no bullets, Gomez will kill all of us.
Major: Ask that priest for a prayer. If he's a good priest, his prayers might be better than bullets or horses.
See more »

Larry McMurtry seems to be turning "Lonesome Dove" into a cottage industry, but this "prequel" works fairly well on its own terms. It's mounted in good-looking style and has a first-rate whipping scene wherein Jonny Lee Miller, stripped to the waist, is tied to the back of a wagon and given 100 lashes, the first 50 by one man and the second 50 by another. When that first lash hits Miller's bare back, you not only see it and hear it -- you FEEL it!