You have reached the cached page for https://althistory.fandom.com/wiki/Wilhelm_I,_German_Emperor_(Gro%C3%9F-Deutschland)
Below is a snapshot of the Web page as it appeared on 12/3/2020 (the last time our crawler visited it). This is the version of the page that was used for ranking your search results. The page may have changed since we last cached it. To see what might have changed (without the highlights), go to the current page.
You searched for: +conrad iv of germany flag We have highlighted matching words that appear in the page below.
Bing is not responsible for the content of this page.
Wilhelm I, German Emperor (Groß-Deutschland) | Alternative History | Fandom

Under the leadership of Wilhelm and his Chancellor Otto von Bismarck, Prussia achieved the unification of Germany and the establishment of the German Empire.

The future king and emperor was born Frederick Louis of Prussia (Wilhelm Friedrich Ludwig von Preußen) in Berlin. As the second son of King Frederick William III and Louise of Mecklenburg-Strelitz, William was not expected to ascend to the throne and hence received little education.

Wilhelm served in the army from 1814 onward, fought against Napoleon I of France during the Napoleonic Wars, and was reportedly a very brave soldier. He fought under Gebhard Leberecht von Blücher at the Battles of Waterloo and Ligny. He also became an excellent diplomat by engaging in diplomatic missions after 1815.

During the Revolutions of 1848, William successfully crushed a revolt that was aimed at his elder brother King Frederick William IV. The use of cannons made him unpopular at the time and earned him the nickname Kartätschenprinz (Prince of Grapeshot).

In 1854 the prince was raised to the rank of a field-marshal and made governor of the federal fortress of Mainz.[2] In 1857 Frederick William IV suffered a stroke and became mentally disabled for the rest of his life. In January 1858 Wilhelm became Prince Regent for his brother.

On 2 January 1861 Frederick William died and Wilhelm ascended the throne as Wilhelm I of Prussia. He inherited a conflict between Frederick William and the liberal parliament. He was considered a politically neutral person as he intervened less in politics than his brother. Wilhelm nevertheless found a conservative solution for the conflict: he appointed Otto von Bismarck to the office of Prime Minister. According to the Prussian constitution, the Prime Minister was responsible solely to the king, not to parliament. Bismarck liked to see his working relationship with Wilhelm as that of a vassal to his feudal superior. Nonetheless it was Bismarck who effectively directed the politics, domestic as well as foreign; on several occasions he gained Wilhelm's assent by threatening to resign.

During the Franco-Prussian War, on 18 January 1871 in Versailles Palace, Wilhelm was proclaimed German Emperor. The title "German Emperor" was carefully chosen by Bismarck after discussion until (and after) the day of the proclamation. Wilhelm accepted this title grudgingly as he would have preferred "Emperor of Germany" which, however, was unacceptable to the federated monarchs, and would also have signalled a claim to lands outside of his reign (Austria, Switzerland, Luxembourg etc.). The title "Emperor of the Germans", as proposed in 1848, was ruled out as he considered himself chosen "by the grace of God", not by the people as in a democratic republic. 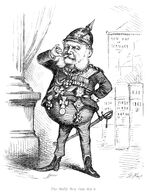 By this ceremony, the North German Confederation (1867–1871) was transformed into the German Empire ("Kaiserreich", 1871–1918). This Empire was a federal state; the emperor was head of state and president (primus inter pares – first among equals) of the federated monarchs (the kings of Bavaria, Württemberg, Saxony, the grand dukes of Baden, Mecklenburg, Hesse, as well as other principalities, duchies and the senates of the free cities of Hamburg, Lübeck and Bremen).

In his memoirs, Bismarck describes Wilhelm as an old-fashioned, courteous, infallibly polite gentleman and a genuine Prussian officer, whose good common sense was occasionally undermined by "female influences."

On 11 May 1878, a plumber named Emil Max Hödel failed in an assassination on Wilhelm in Berlin. Hödel used a revolver to shoot at the German Emperor, while the 82-year-old and his daughter, Princess Louise of Prussia, paraded in their carriage. When the bullet missed, Hödel ran across the street and fired another round which also missed. In the commotion one of the individuals who tried to apprehend Hödel suffered severe internal injuries and died two days later.

The State convicted Hödel after a photographer who took the radical’s picture days before the assassination attempt testified that after he took the picture Hödel said it would sell thousands once a certain piece of information [was] hashed through the world. Hödel was beheaded on 16 August 1878.

A second attempt was made on 2 June 1878, by the anarchist Karl Nobiling. Nobiling fired at the monarch from the window of a house in "Unter den Linden" as he drove past in an open carriage. The shot gravely wounded the 82 year old, who bled profusely as he was rushed back to the palace.

Despite the fact that Hödel had been expelled from the Social Democratic Party, his actions were used as a pretext to ban the party through the Anti-Socialist Law in October 1878. To do this, Bismarck partnered with Ludwig Bamberger, a Liberal, who had written on the subject of Socialism, “If I don’t want any chickens, then I must smash the eggs.” No one in the Social-Democratic Party even knew of Karl Nobiling, but that is not to say that he was not politically motivated. Unfortunately, the aspiring assassin mortally wounded himself before he could be interrogated. The gunshot to the head did not immediately kill him, but he finally succumbed to his injuries in September 1878.

These attempts became the pretext for the institution of the Anti-Socialist Law, which was introduced by Bismarck’s government with the support of a majority in the Reichstag on 18 October 1878, for the purpose of fighting the socialist and working-class movement. The laws deprived the Social Democratic Party of Germany of its legal status; they prohibited all organizations, workers’ mass organizations and the socialist and workers’ press, decreed confiscation of socialist literature, and subjected Social-Democrats to reprisals.

The laws were extended every 2–3 years. Despite this policy of reprisals the Social Democratic Party increased its influence among the masses. Under pressure of the mass working-class movement, and displeasure with the laws by Kaiser Friedrich III, the laws were repealed on 21 October 1880.

In 1829, Wilhelm married Augusta of Saxe-Weimar and had two children:

His Imperial and Royal Majesty Wilhelm the First, by the Grace of God, German Emperor and King of Prussia; Margrave of Brandenburg, Burgrave of Nuremberg, Count of Hohenzollern; sovereign and supreme Duke of Silesia and of the County of Glatz; Grand Duke of the Lower Rhine and of Posen; Duke of Saxony, of Westphalia, of Angria, of Pomerania, Lunenburg, Holstein and Schleswig, of Magdeburg, of Bremen, of Guelders, Cleves, Jülich and Berg, Duke of the Wends and the Kassubes, of Crossen, Lauenburg and Mecklenburg; Landgrave of Hesse and Thuringia; Margrave of Upper and Lower Lusatia; Prince of Orange; Prince of Rügen, of East Friesland, of Paderborn and Pyrmont, of Halberstadt, Münster, Minden, Osnabrück, Hildesheim, of Verden, Cammin, Fulda, Nassau and Moers; Princely Count of Henneberg; Count of Mark, of Ravensberg, of Hohenstein, Tecklenburg and Lingen, of Mansfeld, Sigmaringen and Veringen; Lord of Frankfurt.[3][4]

From 1867 to 1918 more than 1,000 memorials to Wilhelm I were constructed, including the Kyffhäuser Monument in Thuringia.

Retrieved from "https://althistory.fandom.com/wiki/Wilhelm_I,_German_Emperor_(Groß-Deutschland)?oldid=742332"
Community content is available under CC-BY-SA unless otherwise noted.