You have reached the cached page for https://markattheflicks.blogspot.com/2017/08/so-what-by-joe-walsh-june-2015-us-audio.html
Below is a snapshot of the Web page as it appeared on 10/5/2021 (the last time our crawler visited it). This is the version of the page that was used for ranking your search results. The page may have changed since we last cached it. To see what might have changed (without the highlights), go to the current page.
You searched for: +blue magic welcome to the club lyrics joe walsh We have highlighted matching words that appear in the page below.
Bing is not responsible for the content of this page.
Sounds Good, Looks Good...: "So What" by JOE WALSH (June 2015 US Audio Fidelity SACD Hybrid CD Reissue – Kevin Gray Remaster) - A Review by Mark Barry and Comparison to Japanese Remasters...

"So What" by JOE WALSH (June 2015 US Audio Fidelity SACD Hybrid CD Reissue – Kevin Gray Remaster) - A Review by Mark Barry and Comparison to Japanese Remasters... 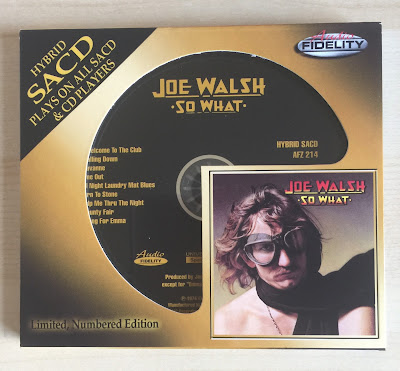 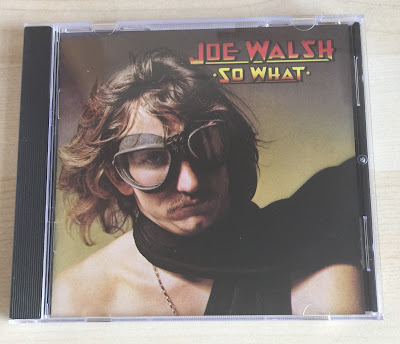 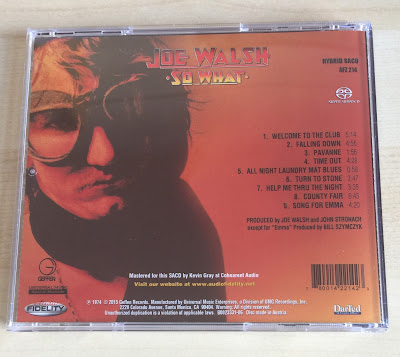 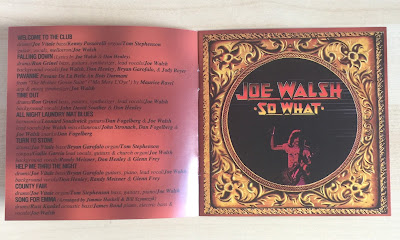 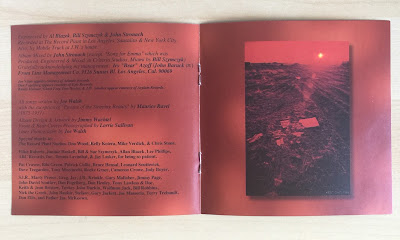 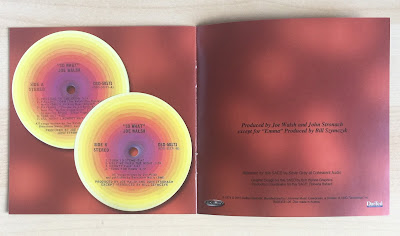 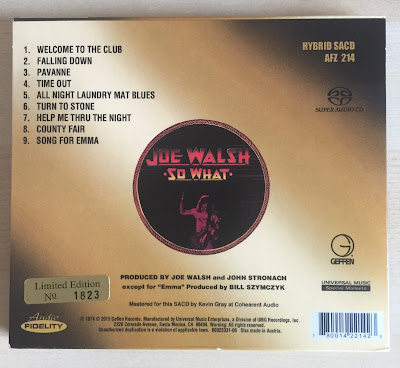 This Review and 241 More Like It Can Be Found In My AMAZON e-Book
PICK UP THE PIECES - 1974
Your All-Genres Guide To Exceptional
CD Reissues and Remasters
Classic Albums, Compilations, 45's...
All In-Depth Reviews From The Discs Themselves
Over 2,200 E-Pages
(No Cut And Paste Crap)
<iframe style="width:120px;height:240px;" marginwidth="0" marginheight="0" scrolling="no" frameborder="0" src="//ws-eu.amazon-adsystem.com/widgets/q?ServiceVersion=20070822&OneJS=1&Operation=GetAdHtml&MarketPlace=GB&source=ss&ref=as_ss_li_til&ad_type=product_link&tracking_id=mabasreofcdbl-21&language=en_GB&marketplace=amazon&region=GB&placement=B08CQ7QLV2&asins=B08CQ7QLV2&linkId=4a0921806bfd2d1d5d1a3ee8294a571e&show_border=true&link_opens_in_new_window=true"></iframe>

Originally vinyl released December 1974 in the USA and January 1975 in the UK on Dunhill/ABC Records – Joe Walsh's fabulous "So What" album has had something of a colourful history on CD reissue.

I think this will probably be the fourth time I've reviewed the American guitar hero's third studio album (this issue warrants another go round). But before I get into this lovely-sounding 2015 SACD-Hybrid reissue - some history first with regard to the reissue-audio surrounding this record...

“So What” has been available on a US CD for years but the original issue is an ok-only mid-90's non-remastered bog-standard version with a crap information-less slip of an inlay. And for an audiophile's dream of an album is a huge let down.

Things changed in October 2004 when Japan re-issued "Barnstorm" (1972), "The Smoker You Drink, The Player You Get" (1973) and "So What" (1974) on STANDARD CDs in 24-bit remastered form in full US REPRO MINI LP SLEEVES. As usual with Japanese reissues – the 5” card sleeve repro attention to detail dazzled. The “So What” issue came with its embossed outer and inner sleeves and both Smoker & Barnstorm in their hard-card gatefolds – all very tastefully done. I bought all three at the time and the sound was fabulous - especially on Smoker & So What. 24-bit remastered by HITOSHI TAKIGUCHI in Universal's Mastering Studios - not surprisingly they sold out almost immediately and across the next few years (with no equivalent domestic releases) quickly became very expensive collector's items.

Which finally brings us to reissue number four - this 2015 American Audiophile version that I feel may be the best so far...

1. Welcome To The Club [Side 1]
2. Falling Down
3. Pavane Of The Sleeping Beauty
4. Time Out
5. All Night Laundromat Blues
6. Turn To Stone [Side 2]
7. Help Me Thru The Night
8. County Fair
9. Song For Emma
Tracks 1 to 9 are his 3rd solo album “So What” - released December 1974 in the USA on ABC/Dunhill Records DSD-50171 and January 1975 in the UK on ABC Records ABCL 5055. Produced by JOE WALSH and JOHN STRONACH (except "Song For Emma" by BILL SZYMCZYK) – the album peaked at No 11 in the US LP charts (didn’t chart UK). All songs by Joe Walsh except “Pavane” which is “Pavane De La Belle Au Bois Dormant” from “The Mother Goose Suite” by Maurice RAVEL.

MUSICIANS:
JOE WALSH – Guitars, Keyboards and Lead Vocals
KENNY PASSERELLI – Bass on "Turn To Stone", "Help Me Thru The Night" and "County Fair"
JOE VITALE – Drums on "Welcome To The Club"

PACKAGING:
The outer card wrap is numbered on the rear – a limited edition in gold of 5000. Beneath the die-cut card slipcase is a standard jewel case with a functional eight-page booklet that reproduces the artwork of the original LP including that lovely inner sleeve with all the musician credits. Both the Dunhill/ABC Records labels for Side 1 and 2 of the US LP fill up page 7 but disappointingly with all these AF releases – there’s no new liner notes. But the real deal here is the sound...

AUDIO:
So is 2015's AF release worth the spondulicks – yes it is. Kevin Gray's reputation as an Audio Engineer of real class is pretty formidable – 38 years of tape transfer experience with musical giants like Universal and Sony. I've reviewed and sung the praises of CDs sprinkled with his magic touch - “Second Helping” by Lynyrd Skynyrd, “12 Songs” by Randy Newman and Walsh's own “The Smoker You Drink, The Player You Get”. He's done another fabulous job here and I notice the CD playing time is 10-seconds longer than my 2009 Japanese Remaster (quids in eh!).

To the music... Predating Joe Walsh joining the Eagles band in 1976 for their iconic “Hotel California” album – “So What” famously featured three members of the US Country Rock Vocal Supergroup – Don Henley, Glenn Frey and Randy Meisner. All three sing backing harmonies on Side 2's "Turn To Stone" and "Help Me Thru The Night" - while Don Henley not only sings on Side 1's "Falling Down" – he co-wrote the lyrics. Other notables are Tom Stephenson's Organ sound that adds so much to “Turn To Stone” and Henley and John David Souther's subtle oohing backing vocals to the wicked guitar groove of “Time Out” (Souther is practically an honorary Eagle too).

That slight hiss to the opener “Welcome To The Club” is still there - but the Vitale drum whacks and Passarelli Bass lines are much more evident too. The very audiophile Acoustic Rock of “Falling Down” is just stunning – chewing up my B&W speakers as that gorgeous melodic sound he gets swirls around your listening room like a ballerina enjoying herself. He plays everything on the classical interlude - the huge synths on the Maurice Ravel excerpt "Pavane Of The Sleeping Beauty" razor-sharp and full of emotional power. There won’t be many fans that won’t greedily flick to the punch of "Time Out" – only this time they’ll be treated to real muscle. What a thrill to hear this superb little Walsh melodic Rock tune get the balls it’s always deserved. The witty but silly Side 1 ender "All Night Laundry Mat Blues" is a short bit of fun - but beautifully produced nonetheless and it sounds awesome here.

Side 2 begins with the big one - the gorgeous "Turn To Stone". It must have been around February 1975 when I tuned into Bob Harris on the BBC Rock show "The Old Grey Whistle Test" and they ran a film of a clay Don Quixote character on a horse riding away into the animation sunset as those guitars swayed and the organ note kicked in. It was mesmerizing back then and is doubly so here – real punch and clarity to the transfer. "Help Me Thru The Night" was always an audiophile ballad – gorgeous guitar playing on both acoustic and lead electric – those swaying harmony vocals – it’s all so much better now. And "County Fair" surely has his best zippy licks and guitar work ever – that staggering end portion where the drums finally lift off and the guitars leap and moan in slide heaven.

In 1973 his 3-year old daughter Emma was tragically killed in a car accident (hit by a drunk-driver) and the resultant "Song For Emma" literally aches with that unimaginable pain. I’ve always found it difficult to listen to - but "Song For Emma" is incredibly mature songwriting - the strings sweeping up and down - a truly beautiful tribute and a crushing moment on an album that had mostly been fun prior. The Remaster here only adds to that dynamic – potent stuff indeed.

Should you opt for the 2009 Japanese SHM-CD with its great sound and beautiful repro artwork – or go for the more accessible 2015 Audio Fidelity issue with equally cool audio? It’s much of a muchness to some I know – but as a lifetime fan of the "So What" album - I find I’m playing the AF version almost exclusively. Open my eyes again indeed...
at August 24, 2017