You have reached the cached page for https://katchingmyi.blogspot.com/2013/12/oscar-winning-actress-joan-fontaine-has.html
Below is a snapshot of the Web page as it appeared on 1/17/2022 (the last time our crawler visited it). This is the version of the page that was used for ranking your search results. The page may have changed since we last cached it. To see what might have changed (without the highlights), go to the current page.
You searched for: +beverly harris alesha dixon mother dies images of life photos We have highlighted matching words that appear in the page below.
Bing is not responsible for the content of this page.
KATCHING MY I: Oscar winning actress Joan Fontaine has died aged 96

The lifelong feud with her sister that Hollywood starlet took to her grave: How Oscar-winner Joan Fontaine failed to heal bitter rift with Olivia de Havilland before dying aged 96

Oscar winning actress Joan Fontaine has died aged 96.
The Hollywood icon, who maintained a bitter rivalry with her sister and fellow actress Olivia de Havilland, passed away from natural causes in her sleep at her home in California on Sunday.
Fontaine's assistant confirmed the death to The Hollywood Reporter, a fitting end for the star who once told Vanity Fair she wanted to die 'in bed – alone'.
She had been fading in recent days and died 'peacefully,' her longtime friend Noel Beutel said. 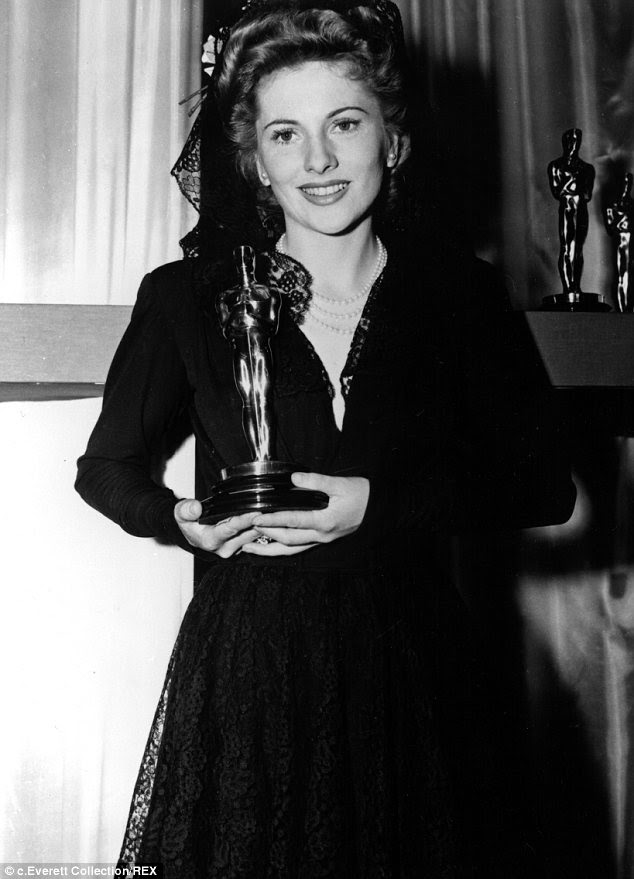 Hollywood legend: Joan Fontaine, who won an Academy Award in 1941 for her role in Alfred Hitchcock's Suspicion, has passed away at the age of 96 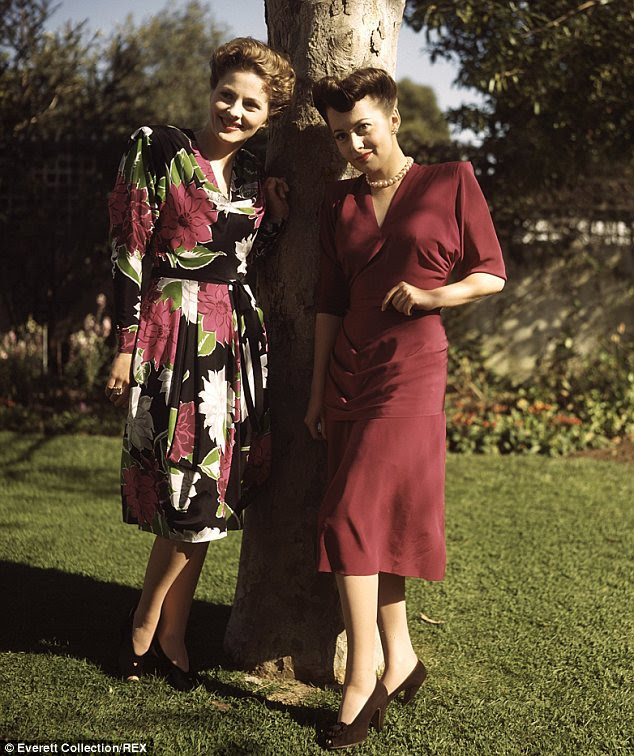 Strained relationship: Joan and her sister Olivia De Havilland were bitter rivals in their personal and professional lives and didn't speak to each other since the Seventies

Joan won an Academy Award in 1941 for her role in Alfred Hitchcock’s Suspicion, beating a host of other actresses including her older sister Olivia to the prestigious honour.
She starred alongside Cary Grant in the Oscar winning role while De Havilland had been nominated for To Each His Own.

The actress and her sister were at loggerheads throughout their lives and finally stopped speaking to each other in 1975 after their mother died of cancer.
Fontaine said de Havilland had not invited her to the memorial service, but her sister claimed Fontaine had said she was too busy to attend.
'I married first, won the Oscar before Olivia did, and if I die first, she'll undoubtedly be livid because I beat her to it,' Fontaine was quoted as telling the Hollywood Reporter in 1978, according to the Washington Post.
De Havilland, herself a two-time Oscar winner, is 97 and living in Paris. 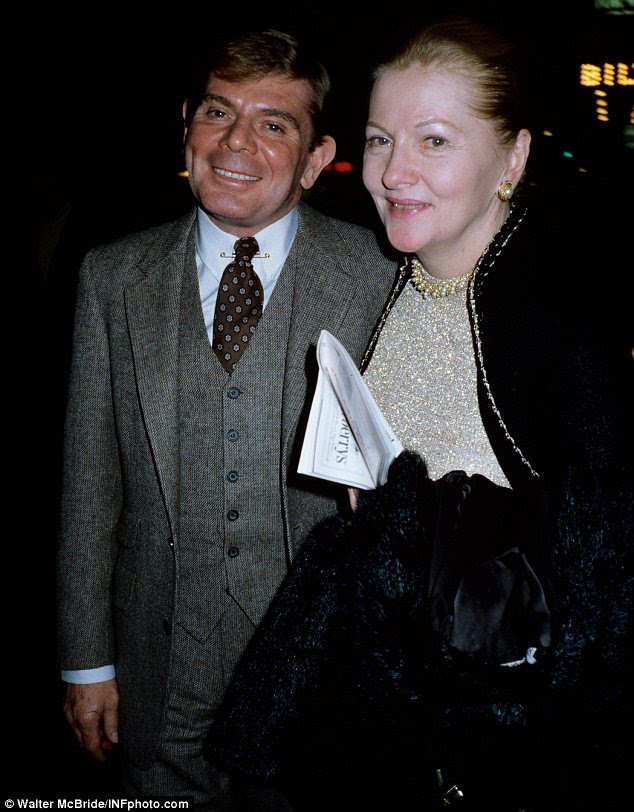 Long life: Joan, pictured here in 1981, was 96 when she passed away from natural causes on Saturday in Carmel, California 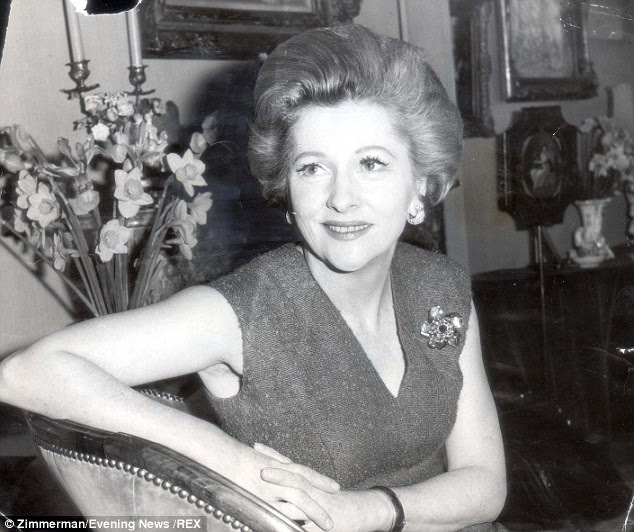 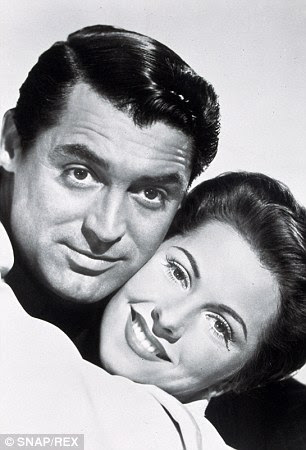 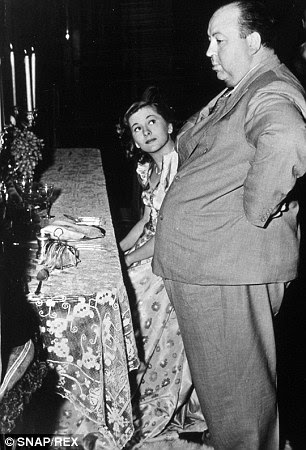 Both frankly confessed that, even as children, they detested one another.
At times, they were in competition for the same men - one was the eccentric billionaire Howard Hughes.
Sometimes they fought for the same leading roles.
In the case of Gone With The Wind, it was Olivia who won the role of Melanie Hamilton Wilkes, and Joan who did not.
But when it came to Alfred Hitchcock’s screen version of Daphne du Maurier’s novel Rebecca, it was Joan who beat her sister to the coveted role of the second Mrs de Winter. 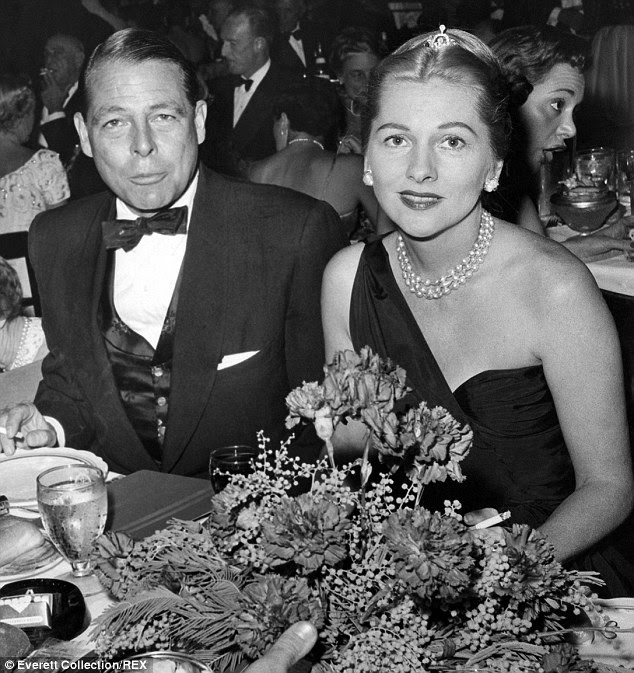 Glamorous: Joan Fontaine, with her third husband, the writer and producer Collier Young, in 1958 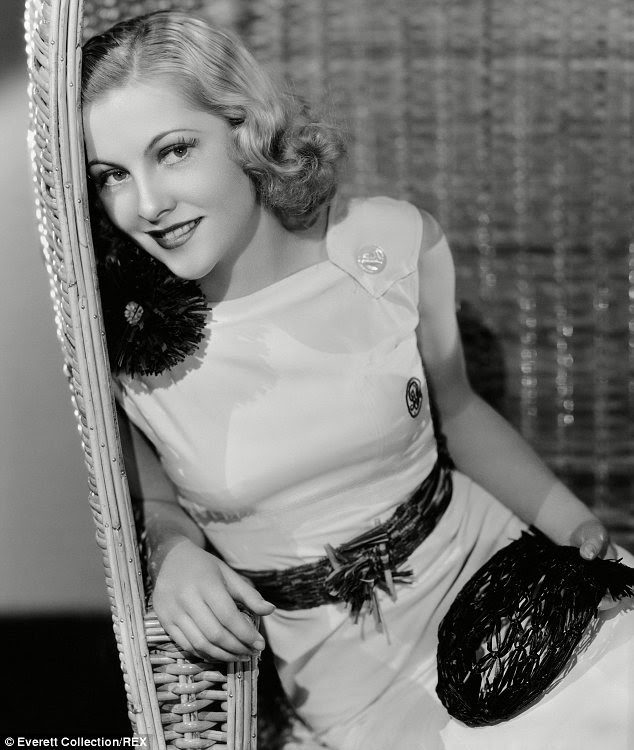 Beauty: Joan, pictured in 1936,  was one of Alfred Hitchcock's famed blondes and the only actor to ever win an Oscar for one of his movies 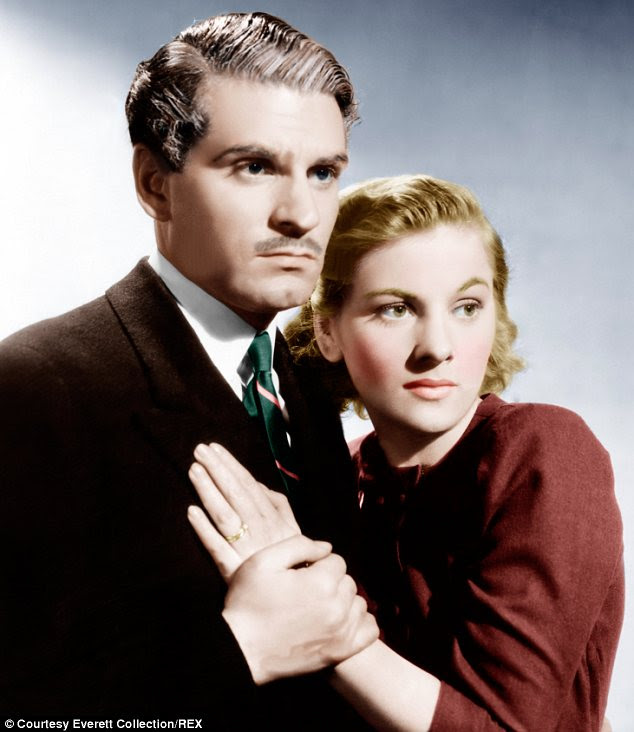 Famous role: Joan starred with Laurence Olivier in Rebecca, for which she received an Oscar nomination in 1940, the year before she won for Suspicion

FONTAINE LEFT HOLLYWOOD AFTER BEING ASKED TO PLAY ELVIS'S MUM

Fontaine appeared in more than 30 movies, including early roles in The Women and Gunga Din, the title part in Jane Eyre and in Max Ophuls' historical drama Letter from an Unknown Woman.
She was also in films directed by Billy Wilder including The Emperor Waltz, Fritz Lang's Beyond a Reasonable Doubt and, wised up and dangerous, in Nicholas Ray's Born to be Bad.
Fontaine was featured in Jane Eyre with Orson Welles and she and Bing Crosby got top billing in Emperor Waltz.
Her most daring role came in the 1957 film Island in the Sun, in which she had an interracial romance with Harry Belafonte.
Several Southern cities banned the movie after threats from the Ku Klux Klan.
Fontaine said she left Hollywood because she was asked to play Elvis Presley's mother.
'Not that I had anything against Elvis Presley. But that just wasn't my cup of tea,' she said.
While making New York her home for 25 years, she appeared in about 30 dinner theater plays.
She starred on Broadway in 1954 in Tea and Sympathy and in 1980 received an Emmy nomination for her cameo on the daytime soap Ryan's Hope.
The cause of their estrangement went far beyond professional sibling-rivalry, however.
Its real roots lay in festering family jealousy and in the desperate battle waged by both women for the love of their mother, Lilian — who switched her affection bewilderingly from one sister to the other for more than half a century.
'I regret that I remember not one act of kindness from her all through my childhood,' Fontaine wrote.
De Havilland reportedly saw her younger sister as a sneaky attention-getter, melodramatically playing sick and trying to outdo her.
The competition was more fierce in 1942 when both sisters were nominated for Oscars and Fontaine took home the statuette for Suspicion in which she played an English woman who begins to suspect her charming husband of trying to kill her.
'It was a bittersweet moment,' Fontaine later recalled. 'I was appalled that I won over my sister.'
When de Havilland won her own Oscar for To Each His Own, she snubbed Fontaine by ignoring her congratulatory gesture at the ceremony.
De Havilland reportedly was upset because Fontaine had made a catty remark about her husband.
Fontaine was nominated three times in all, for her role in Hitchcock's Rebecca in 1940, for Suspicion and again three years later for Edmund Goulding's The Constant Nymph.
She filmed her last big screen movie in 1966, the horror film The Witches, and officially retired in 1994 after working on TV movie Good King Wenceslas. 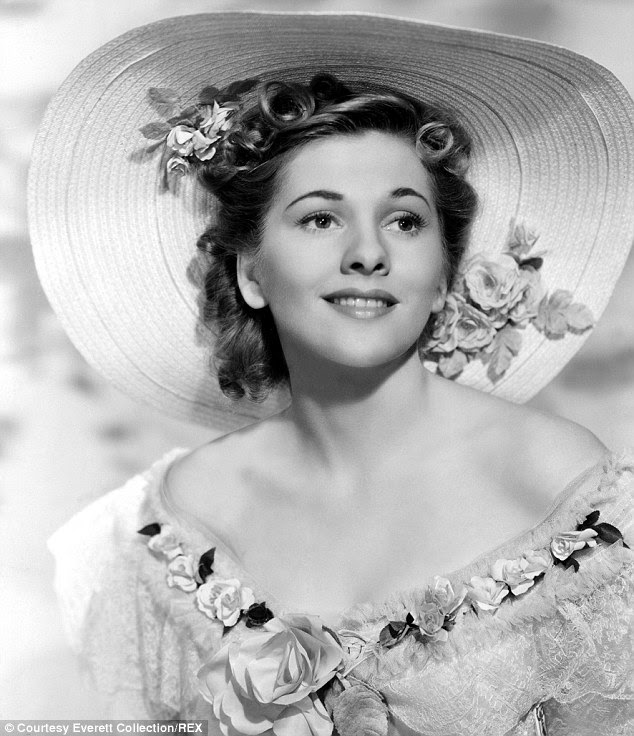 Feud: Joan Fontaine (pictured in Rebecca in 1940) stopped speaking to her sister in 1975 after their mother died of cancer 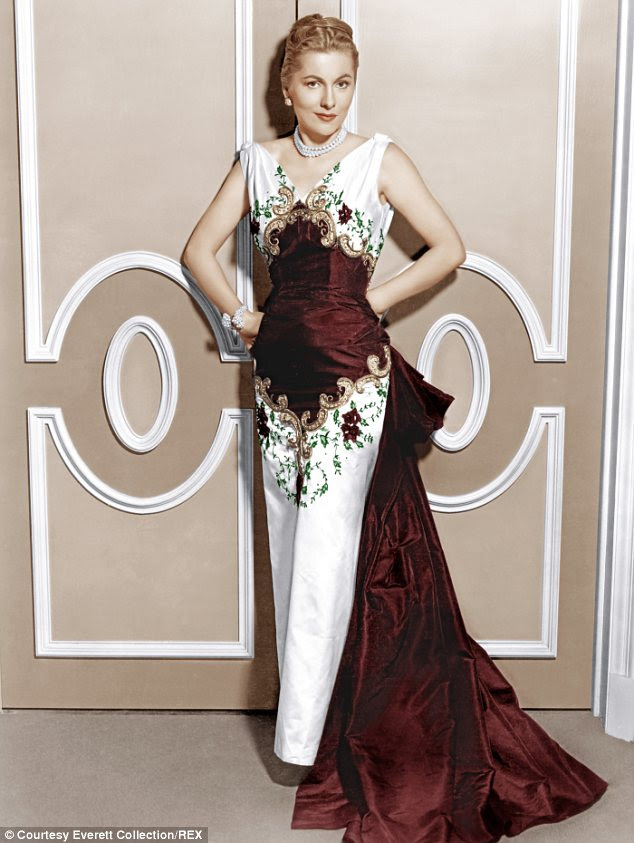 Retired: Joan, pictured in 1956, filmed her last big screen movie in 1966, the horror film The Witches, and officially retired in 1994 after working on TV movie Good King Wenceslas 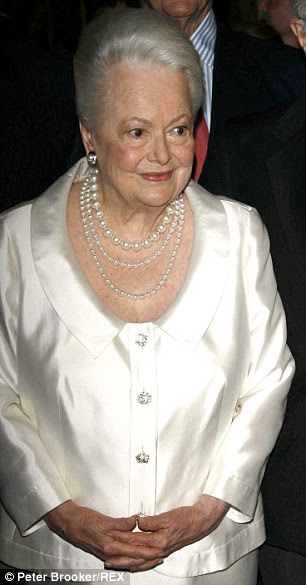 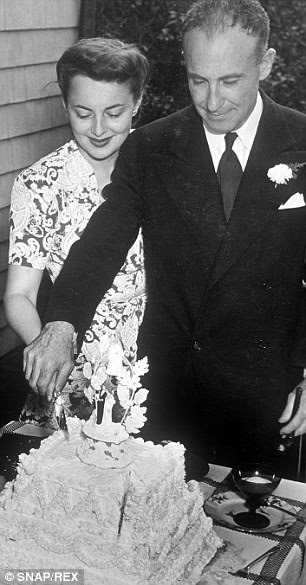 Rival: Olivia de Havilland (left in 2006) and (right) with husband Marcus Goodridge on their wedding day in 1946

Fontaine was married four times, to Brian Aherne, William Dozier – the father of her daughter Deborah - Collier Young and finally Sports Illustrated golf editor Alfred Wright, Jr.
She and Wright divorced in 1969.
In her memoirs, Fontaine maintained she repeatedly turned down marriage proposals from multimillionaire Howard Hughes as well as offers to be the mistress of Joseph Kennedy and other political figures.
In later years, she avidly tended her gardens and doted on her dogs, who numbered as many as five and were taken in from animal rescue agencies.
Fontaine was also known for being exceptionally gracious to fans, answering correspondence and indulging autograph requests until shortly before her death.
Joan is survived by her sister, daughter Deborah and adopted daughter Martita.
She previously admitted to falling out with both of her children and it is not clear if they had reconciled at the time of her death.
Read more: 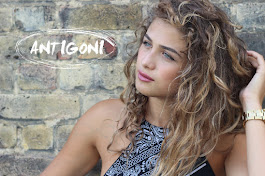 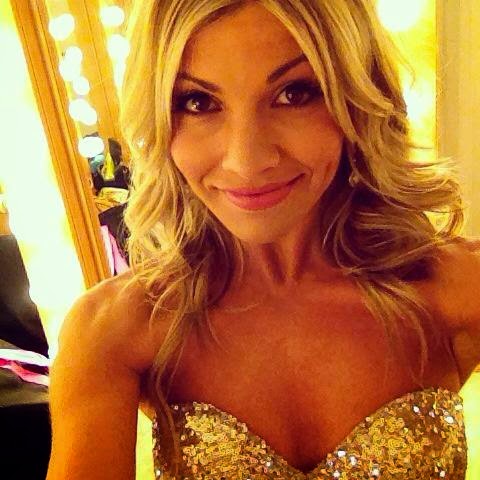 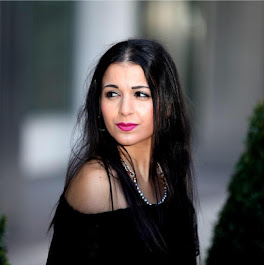