You have reached the cached page for https://about-history.com/battle-of-pavia/
Below is a snapshot of the Web page as it appeared on 8/13/2020 (the last time our crawler visited it). This is the version of the page that was used for ranking your search results. The page may have changed since we last cached it. To see what might have changed (without the highlights), go to the current page.
You searched for: +battle of pavia We have highlighted matching words that appear in the page below.
Bing is not responsible for the content of this page.
Battle of Pavia - About History
Menu

In 1521, the third period of the Italian wars began – the struggle of France against the coalition of Spain and the Holy Roman Empire for hegemony in Italy. The main theater of operations becomes Northern Italy. At the beginning of the war, the Spaniards get a new formidable weapon – the musket.

Emperor Charles V drew to his side the English, the pope, Mantua and Florence. The allies of the French king were Venice and Switzerland.

In 1521, the Spanish-imperial army unexpectedly attacked Lombardy and captured Milan. French troops were defeated at Bicocca.

In 1522, the Spanish army occupied Genoa.

The following year, Venice concluded a separate peace with its allies, losing to Austria’s Gradiška, while the British troops attacked Picardy.

After defeat in the Battle of Sesia on April 30, 1524, the French troops were completely driven out of Italy. In July, the imperial army invaded Provence. Having met no resistance, by the middle of August the Habsburg troops occupied Aix-en-Provence and laid siege to Marseille. However, they failed to take the city by storm, and at the end of September, when the French army led by King Francis arrived in Avignon , the imperial army retreated to Italy. In October 1524, Francis I went to the Alps, occupied Milan and went to the city of Pavia controlled by a garrison of 700 Spaniards and 7,000 landsknechts.

The French and the Swiss (King Francis I) consisted of – 26 thousand soldiers, including 6-6.5 (according to various sources) thousands of knights; 17 thousand pikemen, including 8 thousand Swiss, 5-12 (according to different sources) thousand landsknechts from the “black gang”; and 53 artillery guns.
The Spaniards and Imperials ( Fernando d’Avalos – commander of Charles V) consisted of – 4 thousand knights and 19 thousand infantrymen (including 12 thousand German landsknechts). According to other sources, 2.5 thousand cavalry; 17 thousand pikemen; and 3 thousand musketeers.

At the end of October 1524, the Franco-Swiss army approached Pavia. The artillery destroyed the wall, but the Spanish garrison encounters storming fortifications on a previously prepared second line of fortifications: a ditch is dug in front of the houses, and shots are fired from the windows of the houses. Francis Ι decides to block the city. The garrison and the inhabitants of the city lacked food and ammunition. In addition, since the basis of the garrison consisted of mercenaries, for the besieged the problem of lack of money for the payment of salaries was relevant. The commandant of the fortress, the Spanish commander Antonio de Leyva, Duke of Terranova, was forced because of this to go to the smelting of church property.

The French launched several attacks on the fortress, but they were largely unsuccessful. The only success of the besiegers was the capture on November 10 of a small fortification on the south bank of the Ticino, which covered the bridge over the river and the approaches to the main wall of Pavia from the south. During the day, about forty people defended the small fortetia, but under artillery shelling they were forced to capitulate.

At the beginning of February 1525, the imperial army formed under the command of General Fernando d’Avalos approached the city. About forty thousand people went on the march, but skirmishes, diseases and desertion led to the fact that there were only 23-25 ​​thousand soldiers before the battle. Francis’s army was dispersed around Pavia, but most of it was located on the northeast side of the city, since it was from there that the enemy was expected to appear.

Most of the French army was located in a walled large wooded park Mirabello, north of Pavia. In the center of the park, around the hunting palace was a wagon train. Another squad was located on the east wall. In the northwestern part of the park was a king with artillery and knightly cavalry. Outside the park, just to the east of Pavia, in the area of ​​the Five Abbeys, was a detachment of Swiss mercenaries Montmorency, and another 5.5 thousand people located to the west and south of the city.

The Imperials camped on the east side, 100 meters from the circulation roller line (brick wall of the hunting park). Francis decides to adhere to the defensive mode of action, counting on the collapse of the Imperial troops, where the mercenaries have not been paid for a long time.

Fernando d’Avalos was forced to attack, because, both in the fortress and in the field army, monetary difficulties threatened to undermine discipline among the mercenaries. The initial purpose of the operation was to carry out a train with money, gunpowder and provisions in Pavia. The plan was coordinated with the commandant de Leyva, who, by the established signal (three idle cannon shots at regular intervals), had to leave the city for a sortie and support the attack. On the night of February 23-24, the imperial troops began to advance towards the hunting park. Spanish sappers (vastadors) began the destruction of the poorly guarded northern section of the circulating dam, near the gates of Port Pescarin. However, things were going slowly: gunpowder could not be used so as not to notify the French of what was happening, so the wall was broken with a trench tool. In order to divert the attention of the French and disguise sapper work, a small detachment of Imperials at Tore del Galo (the eastern gate) conducted artillery firing. The gunners were so carried away that they had to send a messenger with an order to shoot less intensively, because in Pavia they could not hear the signal shots.

At about four o’clock in the morning the cavalry detachment of the French under the command of Karl Tirchelin discovered an enemy working at the northern gate. At this point, the Imperials entered the park, and opened the gates of the Port of Pescarin from the inside, so that an artillery battery passed through them, and after it, cavalry began to draw into the park. Marines at this time were making their way through the breach.

Tirchelin, finding the enemy, sent a messenger to the eastern wall, where there was a three-thousand squad of Swiss under the command of Florence and Jan von Diesbach: they immediately moved to Port Peskarin. In addition, Florence sent a messenger to the king in the north-western part of the park. As a thick fog hung over the battlefield, the sides were in the dark about each other’s strengths and actions.

The battle began with a sudden collision in the fog of the detachment of Tirchelin with the riders of de Vasto, advancing from the north. Almost simultaneously, the Swiss of Florence captured the artillery battery of the Imperials from 16 guns, but Florence did not manage to turn this serious success into a decisive one due to the absence of gunners. 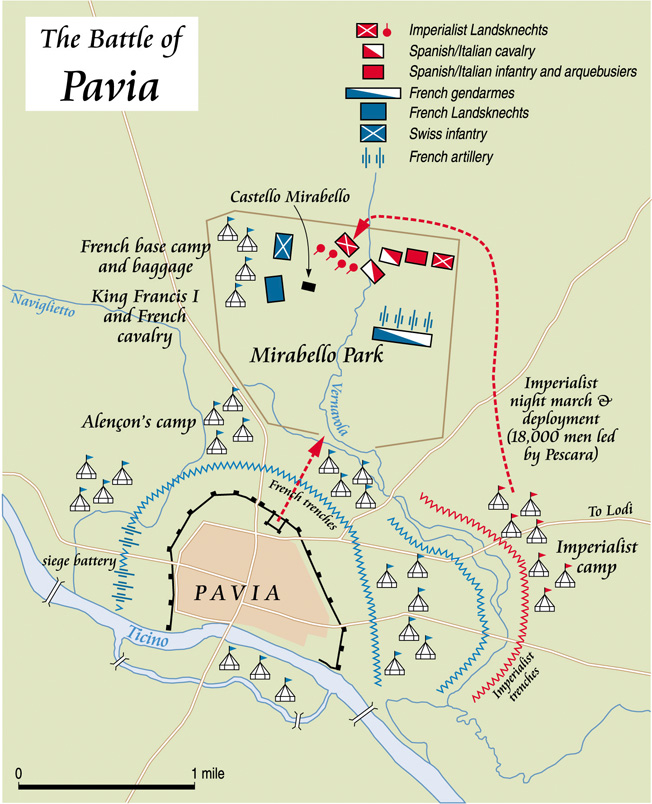 At 6:00, a signal came to de Leive about the start of the raid. The garrison, coming out of the fortress, cut off the French forces at the Five Abbeys (east of Pavia) from the main army. At that time, in the center of the park, one of the Imperialist detachments that had entered inside, Arquebusier de Vasto, captured the palace and the train of the French army. Thus, the French army was cut into pieces: the detachment of Montmorency at the Five Abbeys, Florence at the eastern wall and King Francis in the north-west. In addition, a separate grouping of Alençon to the west of the city simply avoided participation in the battle.

At 7 o’clock in the park from the north entered the imperial landsknechts von Frundsberg and Zitlich. They immediately entered into battle with Florence’s unit. The battles of the landsknecht and the Swiss have always been fierce, and Pavia was no exception.

At almost the same time, King Francis I reached the battlefield from the west at the head of the French heavy cavalry. He began by attacking the imperial knights, and overturned them without much difficulty. However, they retreated to the forest where the French gendarmes did not want or could not pursue them. Now the French knights stood on glade, deprived of maneuver and cramped by shrubs, woods, hummocks and streams of the hunting park. In addition, Francis blocked the zone of shelling of his own artillery.

The hitch was fully exploited by the Imperials. From the palace in the center of the park, the Arquebusier de Vasto turned around, Frundsberg led a part of the landsknechts from the battle against the Swiss and advanced them to meet the threat. Local numerical superiority over the Swiss remained, so he could not fear for this site. As a result of these maneuvers, Francis was isolated from all parts that could support him, was captured by the Spaniards and finally, was unable to effectively attack because of the rugged terrain, or at least retreat.

Began the collapse of the French army. The cavalry was subjected to the most severe shelling from the arquebus, from which the horses especially suffered. A significant part of the gendarmes died under fire, the survivors were deprived of horses and finished off by landsknechts and Spaniards who came to point-blank. Francis, also dismounted, was nearly killed, but Lannua did not allow the deprivation of such a valuable prisoner. Other French aristocrats mostly died in battle. Among those killed were Guillaume Guffier (Bonnieve), Marshal of France La Paliss , Bastard of Savoy and other representatives of the nobility.

The “black gang” attempting to break through to the aid of the king was attacked by superior forces and, after a stubborn fight, was defeated. Its remnants retreated to the west.

At this time, the Swiss at the eastern wall began to slowly roll back first, and then fled. Florence and von Dizbach were captured. Due to the nature of the relationship between landsknechts and Swiss, the latter were hardly ever taken alive. Garrison de Leyva finished off the second detachment of the Swiss under the command of Montmorency at the Five Abbeys: they broke down after seeing compatriots fleeing landsknechts. The remains of the Swiss fled through the swamps to the south and were dumped in Ticino. The river was not wide, but not everyone managed to cross it, because it was the end of February. Montmorency was also taken alive.

The rearguard of the French army under the command of the duke of Alençon did not dare to join the battle. There is a version that after seeing the defeat of the main forces of the French, the duke ordered his retreating across the Ticino river and after crossing to destroy the bridge, which deprived the Swiss on the north bank of the road to escape. One can argue against this statement: Alencon was located west of the city and did not have a clear idea of ​​the course of the battle. Thus, it is through his fault (the slowness, cowardice or carelessness of Karl that is the reason – no one will know) the remnants of the Swiss infantry died. Be that as it may, there is no doubt that those who were running, whether they were cut off from the crossing or came across a destroyed bridge, were forced to swim.