You have reached the cached page for http://www.unofficialroyalty.com/sophie-friederike-of-bavaria-archduchess-of-austria/
Below is a snapshot of the Web page as it appeared on 2/26/2021 (the last time our crawler visited it). This is the version of the page that was used for ranking your search results. The page may have changed since we last cached it. To see what might have changed (without the highlights), go to the current page.
You searched for: +archduchess sophie of austria We have highlighted matching words that appear in the page below.
Bing is not responsible for the content of this page.
Sophie Friederike of Bavaria, Archduchess of Austria | Unofficial Royalty 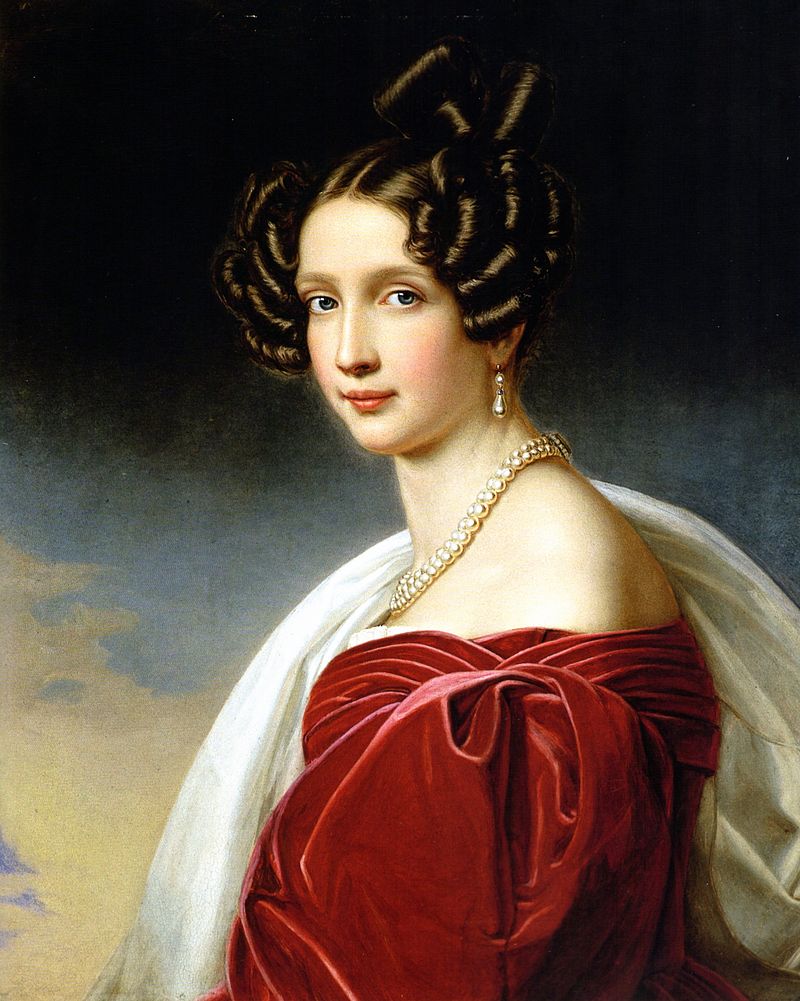 The mother of Emperor Franz Joseph of Austria and the ill-fated Emperor Maximilian of Mexico, the grandmother of Archduke Franz Ferdinand of Austria whose assassination sparked World War I and the great-grandmother of  Karl I, the last Emperor of Austria, Sophie Friederike Dorothea Wilhelmine was born January 27, 1805, in Munich, then in the Electorate of Bavaria, now in Bavaria, Germany, along with her identical twin sister Maria Anna Leopoldine Elisabeth Wilhelmine. At the time of Sophie’s birth, her father Maximilian Joseph was Duke of Zweibrücken, Elector of Bavaria, Duke of Berg, and Elector Palatine. Due to his loyal service to Napoleon, Emperor of the French, Maximilian Joseph’s Electorate of Bavaria was created a kingdom and he became the first King of Bavaria on January 1, 1806. Maximilian Joseph’s first wife Augusta Wilhelmine of Hesse-Darmstadt had died in 1796 and he married Sophie’s mother Caroline of Baden in 1797.

Maximilian Joseph was an adherent of The Enlightenment, the intellectual and philosophical movement that dominated the world of ideas in Europe during the 18th century, and his children were educated to think in modern ways. Now that Bavaria was a kingdom, King Maximilian I Joseph and later his son King Ludwig I ensured that the females of the family made good marriages.

Sophie had five half-siblings from her father’s first marriage:

Sophie had six siblings including a twin sister and another set of twin siblings:

In 1816, Sophie’s half-sister Caroline Augusta became the fourth wife of Franz I, Emperor of Austria. Franz’s only surviving children were by his second wife Maria Theresa of Naples and Sicily, who had died in childbirth along with her twelfth child. His eldest son and heir Ferdinand was developmentally delayed and suffered from epilepsy, hydrocephalus, neurological problems, and a speech impediment. Ferdinand learned to walk and talk late, and his condition and behavior caused great concern. Because of his frail constitution, he did not receive the education appropriate for the heir to the throne.

Perhaps it was through the influence of Caroline Augusta, Emperor Franz’s fourth wife and Sophie’s half-sister, that the idea developed of Franz’s second son Franz Karl being a good match for Sophie. At a family gathering of the Habsburgs and the Wittelsbachs (the Bavarian royal family), Franz Karl, who was clumsy and shy, became attracted to Sophie, who was strong-willed and authoritarian. Franz Karl sent Sophie letters and gifts and regularly traveled to Munich to see her. Eventually, he found the courage to ask her to marry him. Some thought the eldest son Ferdinand was incapable of reigning and his father considered removing him from the succession. Franz Karl was somewhat feeble-minded but Sophie’s family agreed to the marriage because they thought that the disabilities of Franz Karl’s brother might cause Franz Karl to succeed to the throne.

On November 4, 1824, Sophie married Archduke Franz. In 1831, Franz’s elder brother
Ferdinand married Maria Anna of Savoy, the daughter of King Victor Emmanuel I of Sardinia. The marriage was childless and probably never consummated, but the couple remained devoted to each other.

After five miscarriages, Sophie and Franz Karl had five children and so they provided the heirs to the throne:

Franz Karl’s brother Ferdinand did succeed to the throne in 1835 upon the death of his father. His epilepsy caused him to have as many as twenty seizures per day, and this severely restricted his ability to rule with any effectiveness. His father’s will stipulated that Ferdinand’s uncle Archduke Ludwig be consulted on government matters and during Ferdinand’s reign a council called the Secret State Conference controlled the government.

The biggest ambition of Franz Joseph’s mother Sophie was to place her oldest son on the Austrian throne. During the Revolutions of 1848, she persuaded her husband to give up his rights to the throne in favor of their son Franz Joseph, and on December 2, 1848, Emperor Ferdinand abdicated the throne in favor of his 18-year-old nephew. Franz Joseph was now Emperor of Austria, King of Hungary and Croatia, and King of Bohemia. During the early years of her son’s reign, Sophie was the power behind the throne and in addition, she fulfilled the duties of an Empress.

The feeling in the Imperial Court was that the young emperor should marry and produce heirs as soon as possible. Franz Joseph’s domineering mother considered several princesses as the future empress but Sophie wanted to forge a relationship with her familial House of Wittelsbach of Bavaria and the House of Habsburg-Lorraine. She arranged for a match between Franz Joseph and Helene, Duchess in Bavaria, the eldest daughter of her sister Ludovika of Bavaria and her husband Duke Maximilian Joseph in Bavaria.

In 1853, Helene traveled with her mother and her younger sister Elisabeth, Duchess in Bavaria (Sisi) to the resort of Bad Ischl, Upper Austria to meet her cousin Franz Joseph with the hopes that she would become his bride. Instead, Franz Joseph fell in love with the 15-year-old Elisabeth. Franz Joseph told his mother that if he could not marry Elisabeth, he would not marry at all. Five days later their engagement was officially announced. Franz Joseph and Sisi were married on April 24, 1854, at the Augustinerkirche, the parish church of the imperial court of the Habsburgs, a short walk from Hofburg Palace in Vienna.

Sophie’s niece and daughter-in-law Elisabeth of Bavaria in 1855; Credit – Wikipedia

Sisi was young, naïve, and shy. Sophie was the stereotype of a nagging mother-in-law, always correcting her daughter-in-law but she was not really the monster her niece Sisi made her out to be. Although Sophie was tactless and indiscreet, this was not unusual for a royal matriarch. She had spent her married life with a husband who probably was somewhat mentally disabled and had to deal with many family issues herself. Sophie devoted herself to her four sons and their futures, especially Franz Joseph. She felt it was her duty to school Sisi in her role as Empress.

In 1855, Sisi gave birth to her first child, a daughter, named Sophie Friederike, after her grandmother without any input from Sisi. Because Sophie did not feel that the teenaged mother was capable of caring for her child, she had chosen the nursery staff and set up the nursery next to her own rooms. This practice continued for Sisi’s next two children. In 1857, on a trip to Hungary which was a part of the Habsburg empire, Franz Joseph and Sisi took their two young children along despite the misgivings of their grandmother Sophie. Two-year-old Sophie and her one-year-old sister Gisela both became ill with diarrhea and a very high fever. Gisela survived but Sophie died in her mother’s arms. The death of her oldest child would haunt Sisi for her entire life and she was held responsible for Sophie’s death by her mother-in-law.

In 1859, Mexico monarchists had approached Sophie’s son Maximilian with a proposal to become Emperor of Mexico which Maximilian did not accept. After the French intervention in Mexico in 1861, Maximilian changed his mind. In 1864, Maximilian accepted the crown of Mexico. His mother Sophie considered this a hazardous move and was strongly opposed. She considered it Maximilian’s duty to stay in Austria and provide additional heirs for the Austrian throne. Sophie’s fears turn out to be true. On May 14, 1867, 34-year-old Maximilian was condemned to death by a court of war and on June 19, 1867, he was executed by a firing squad along with two of his faithful Mexican generals. Before the shooting, Maximilian assured the soldiers that they were only doing their duty, gave them gold coins, and asked them to aim precisely and spare his face, so that his mother could identify his body.

Sophie never recovered after the death of Maximilian and she withdrew from public life. In May 1872, ill with pneumonia, she took to her bed and fell into a coma. Franz Joseph placed the rosary of his great-great-grandmother Maria Teresa, Archduchess of Austria, and Queen of Hungary, Croatia, and Bohemia into his mother’s hands. Neither he nor Sisi left Sophie’s bedside for four days. On May 28, 1872, 67-year-old Sophie of Bavaria, Archduchess of Austria, died. Franz Joseph sobbed like a child and Sisi had to be carried from the room. Sophie was buried at the Imperial Crypt beneath the Capuchin Church in Vienna, Austria. From 1960 – 1962, the New Vault was added to the Imperial Crypt to relieve overcrowding. Sophie’s remains and those of her husband Franz Karl, who survived her by six years, were transferred to the West Wall of the New Vault.

The New Vault in the Imperial Crypt; Credit – Susan Flantzer