Afroasiatic (alternatively Afro-Asiatic), also known as Hamito-Semitic,[1] is a large language family, including about 375 living languages.[3]

The most widely spoken Afroasiatic language is Arabic (including all its colloquial varieties), with 230 million native speakers, spoken mostly in the Middle East and North Africa.[4] Berber languages are spoken in Morocco, Algeria, Libya and across the rest of North Africa and the Sahara Desert by about 25 to 35 million people. Other widely spoken Afroasiatic languages are Amharic, the national language of Ethiopia, with 18 million native speakers; Somali, spoken by around 19 million people in Greater Somalia; and Hausa, the dominant language of northern Nigeria and southern Niger, spoken by 18.5 million people and used as a lingua franca in large parts of the Sahel,[5] with some 25 million speakers in total.[6]

The Afroasiatic language family was originally referred to as "Hamito-Semitic", a term introduced in the 1860s by the German scholar Karl Richard Lepsius.[7] The name was later popularized by Friedrich Müller in his Grundriss der Sprachwissenschaft (Wien 1876-88).[8]

The term "Afroasiatic" (often now spelled as "Afro-Asiatic") was later coined by Maurice Delafosse (1914). However, it did not come into general use until Joseph Greenberg (1963) formally proposed its adoption. In doing so, Greenberg sought to emphasize the fact that Afroasiatic was the only language family that was represented transcontinentally, in both Africa and Asia.[9]

Individual scholars have also called the family "Erythraean" (Tucker 1966) and "Lisramic" (Hodge 1972). In lieu of "Hamito-Semitic", the Russian linguist Igor Diakonoff later suggested the term "Afrasian", meaning "half African, half Asiatic", in reference to the geographic distribution of the phylum's constituent languages.[7]

The term "Hamito-Semitic" remains in use in the academic traditions of some European countries. 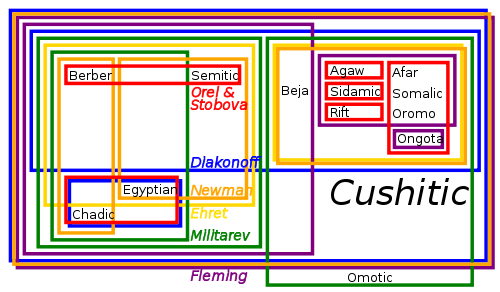 The Afroasiatic language family is usually considered to include the following branches:

While there is general agreement on these six families, there are some points of disagreement among linguists who study Afroasiatic. In particular:

In the 9th century, the Hebrew grammarian Judah ibn Quraysh of Tiaret in Algeria was the first to link two branches of Afroasiatic together; he perceived a relationship between Berber and Semitic. He knew of Semitic through his study of Arabic, Hebrew, and Aramaic.

In the course of the 19th century, Europeans also began suggesting such relationships. In 1844, Theodor Benfey suggested a language family consisting of Semitic, Berber, and Cushitic (calling the latter "Ethiopic"). In the same year, T.N. Newman suggested a relationship between Semitic and Hausa, but this would long remain a topic of dispute and uncertainty.

Friedrich Müller named the traditional "Hamito-Semitic" family in 1876 in his Grundriss der Sprachwissenschaft. He defined it as consisting of a Semitic group plus a "Hamitic" group containing Egyptian, Berber, and Cushitic; he excluded the Chadic group. These classifications relied in part on non-linguistic anthropological and racial arguments that have largely been discredited (see Hamitic hypothesis).

Marcel Cohen (1924) rejected the idea of a distinct Hamitic subgroup and included Hausa (a Chadic language) in his comparative Hamito-Semitic vocabulary.

Joseph Greenberg (1950) strongly confirmed Cohen's rejection of "Hamitic", added (and sub-classified) the Chadic branch, and proposed the new name "Afroasiatic" for the family. Nearly all scholars have accepted Greenberg's classification.

Several scholars, including Harold Fleming and Robert Hetzron, have since questioned the traditional inclusion of Beja in Cushitic.

Position among the world's languages

Afroasiatic is one of the four language families of Africa identified by Joseph Greenberg in his book The Languages of Africa (1963). It is the only one that extends outside of Africa, via the Semitic branch.

Afroasiatic is one of the oldest language families of the world that is generally accepted by linguists as securely established. The earliest written evidence for an Afroasiatic language is from an Ancient Egyptian inscription of c. 3400 BC (5400 years ago).[12] Symbols on Gerzean pottery resembling Egyptian hieroglyphs date back to c. 4000 BC, suggesting a still earlier possible date. This gives us a minimum date for the age of Afroasiatic. However, Ancient Egyptian is highly divergent from Proto-Afroasiatic (Trombetti 1905: 1–2), and considerable time must have elapsed in between them. Estimates of the date at which the Proto-Afroasiatic language was spoken vary widely. They fall within a range between approximately 7500 BC (9,500 years ago) and approximately 16,000 BC (18,000 years ago). According to Igor M. Diakonoff (1988: 33n), Proto-Afroasiatic was spoken c. 10,000 BC. According to Christopher Ehret (2002: 35–36), Proto-Afroasiatic was spoken c. 11,000 BC at the latest and possibly as early as c. 16,000 BC. By any current estimate, Afroasiatic is a language family considerably older than Indo-European (c. 4000 BC according to David Anthony 2007: 48).

The term Afroasiatic Urheimat (Urheimat meaning "original homeland" in German) refers to the 'hypothetical' place where Proto-Afroasiatic speakers lived in a single linguistic community, or complex of communities, before this original language dispersed geographically and divided into distinct languages. Afroasiatic languages are today primarily spoken in the Middle East, North Africa, the Horn of Africa, and parts of the Sahel.

There is no agreement on when and where this Urheimat existed, though the language is generally believed to have originated somewhere in or near the region stretching from the Levant/Near East[13] to the area between the Eastern Sahara and the Horn of Africa, including Egypt, Ethiopia and Sudan.[14][15][16][17][18]

Similarities in grammar and syntax

Tonal languages appear in the Omotic, Chadic, and Cushitic branches of Afroasiatic, according to Ehret (1996). The Semitic, Berber, and Egyptian branches do not use tones phonemically.

Following are some examples of Afroasiatic cognates, including ten pronouns, three nouns, and three verbs.

All translations of AFROASIATIC LANGUAGES