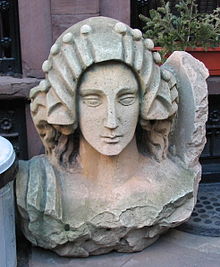 The Ziegfeld Theatre was a Broadway theater located at the intersection of Sixth Avenue and 54th Street in Manhattan, New York City. It was built in 1927 and, despite public protests, was razed in 1966.

A second Ziegfeld Theatre, named in honor of the original, is located at 141 West 54th Street in Manhattan. Designed as a deluxe single screen movie theater, it opened in 1969 and remains in operation today.

The Ziegfeld Theatre was named for the famed Broadway impresario Florenz Ziegfeld, who built it with financial backing from William Randolph Hearst. Designed by Joseph Urban and Thomas W. Lamb, it opened on February 2, 1927 with the musical Rio Rita. The Ziegfeld's second show was also its most famous, Jerome Kern's landmark musical Show Boat which opened on December 27, 1927.

Due to the decline in new Broadway shows during the Great Depression, the theater became the Loew's Ziegfeld in 1933 and operated as a movie theater until showman Billy Rose bought it in 1944.

NBC leased the Ziegfeld for use as a television studio from 1955 to 1963. The Perry Como Show was broadcast from the theater beginning in 1956. It was also used to present the televised Emmy Awards program in 1959 and 1961.

In 1963 the Ziegfeld reopened as a legitimate Broadway theater. This was short-lived however, as Rose began to assemble abutting properties for a new real estate project.[1] The musical Anya (opened November 29, 1965 for 16 performances) was the last musical to play at the theater, which was torn down in 1966 to make way for a skyscraper, the Fisher Bros. Burlington House (later renamed the Alliance Capital, and then Alliance Bernstein building.)[2]

A fragment of the Joseph Urban facade, a female head, can be seen in front of the private home at 52 East 80th Street.[3] The box from the cornerstone and its contents are held by the New York Public Library for the Performing Arts' Billy Rose Theatre Division.

On December 17, 1969, a few hundred feet from the original Ziegfeld Theatre, a new Ziegfeld Theatre opened as a single-screen movie house. Located at 141 West 54th Street, it is one of the last large-scale movie palaces built in the United States. Constructed by Emery Roth & Sons from designs by Irving Gershon and sumptuous red-carpeted interior designs by John J. McNamara, it has 1,131 seats (825 seats in the orchestral section and 306 seats in the tiered rear section). It has been used for 70 mm world premieres and big-event press screenings, such as the November 1977 opening of Close Encounters of the Third Kind.

The theater underwent extensive renovations in the late 1990s. It was a centerpiece site during the 2008 New York Film Festival because of reconstruction work at Lincoln Center that year. During the 2000s, digital projection was installed. In 2010 the Ziegfeld is operated by Clearview Cinemas and remains New York's leading commercial film venue. The theater is the largest single screen cinema in New York and continues to be the site of film premieres and gala events.

A branch of the theater, or one with the same name, operate briefly in Chicago sometime between 1934 and 1958 in the old Steinway Hall at 64 East Van Buren Street, it showed movies.[4]

All translations of Ziegfeld Theatre