The Princess Royal's grief: Anne is teary-eyed as she is supported by her children Peter Phillips and Zara Tindall while looking at floral tributes to the Queen - after she was by her mother's bedside when she died

By Chris Matthews For Mailonline

Princess Anne was teary-eyed today as she was supported by her children Peter Phillips and Zara Tindall while looking at floral tributes to the Queen.

The Queen's only daughter, who was known to have a close relationship with the late monarch, was by her side when she died peacefully on Thursday aged 96 at Balmoral Castle.

The crowd of mourners at the Aberdeenshire estate broke out into a round of applause as senior members of the Royal Family waved to them.

Three of the Queen's four children - the Princess Royal, the Duke of York and Earl of Wessex - joined the Countess of Wessex, Anne's husband, Vice Admiral Sir Tim Laurence, and the Queen's grandchildren Peter Phillips, Zara Tindall, Princesses Beatrice and Eugenie, and Lady Louise Windsor for a walkabout after attending a prayer service at Crathie Kirk. 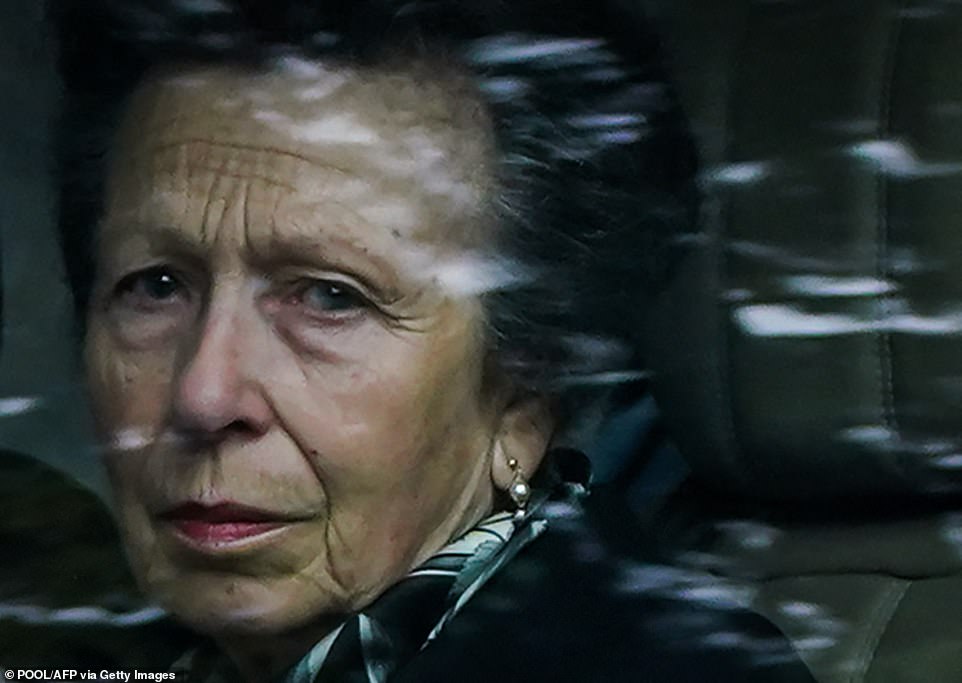 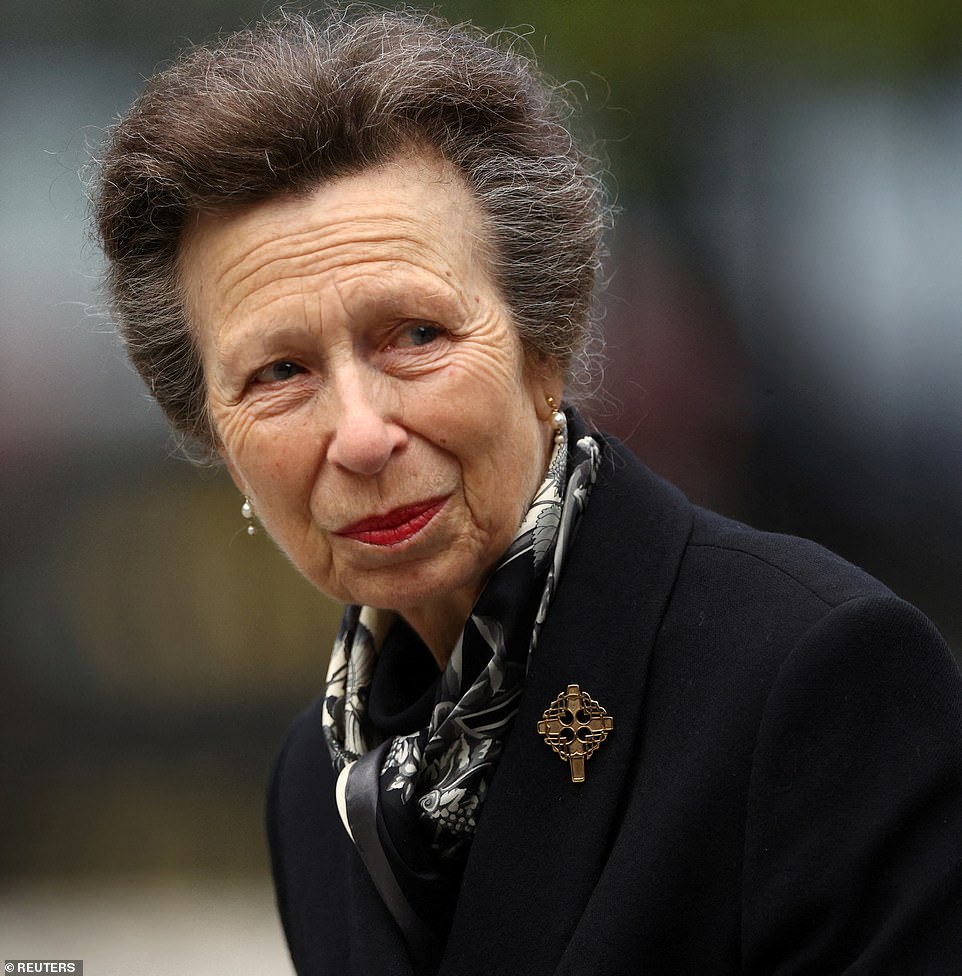 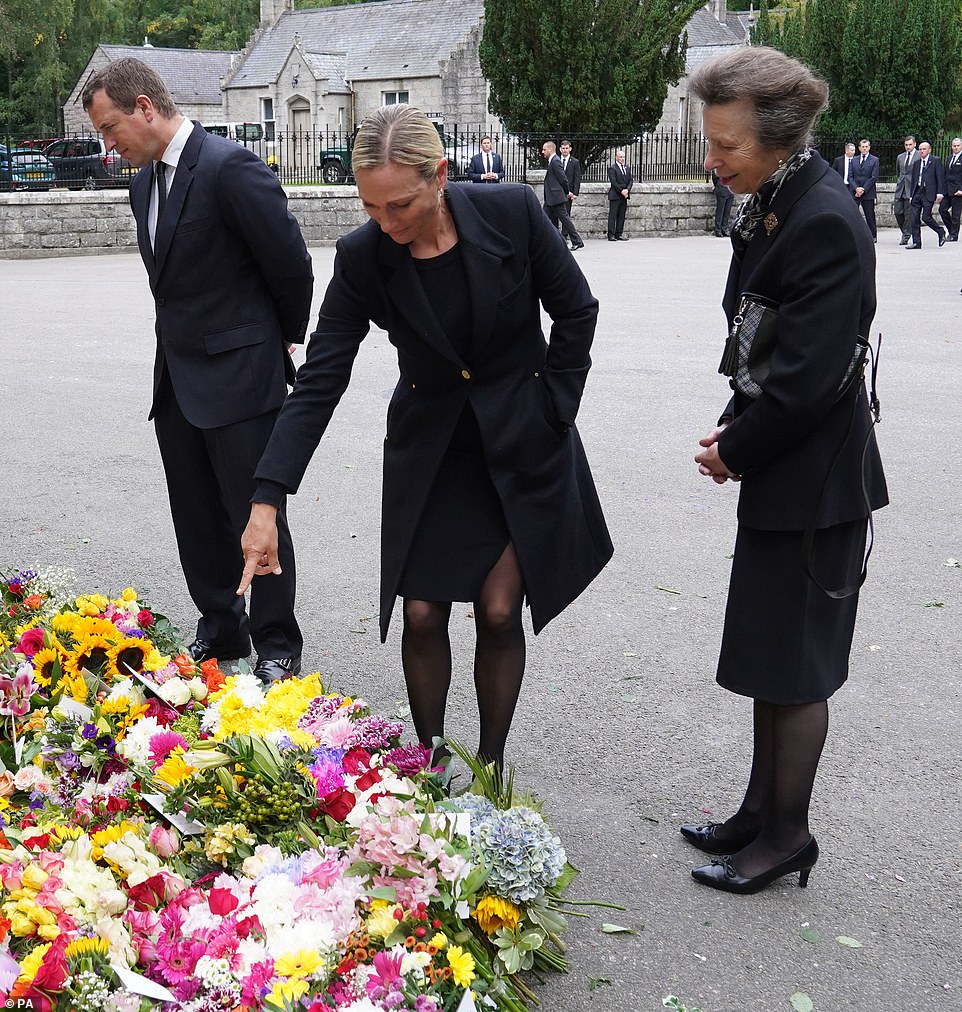 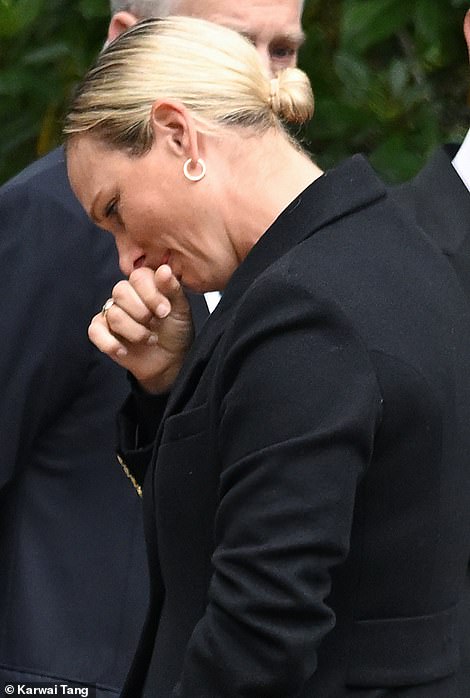 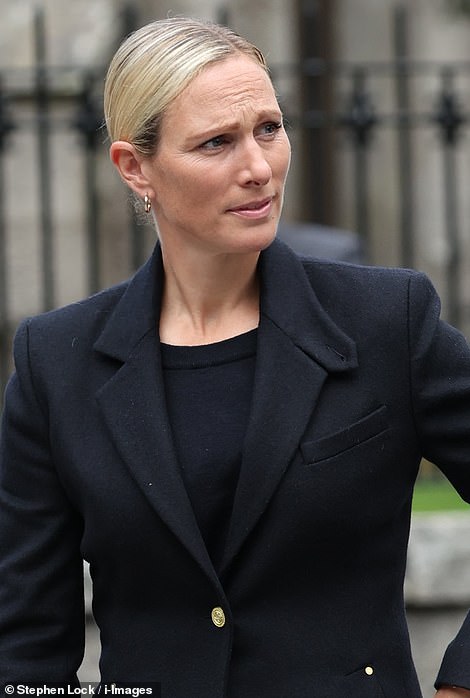 Zara Tindall wept as she viewed floral tributes on Balmoral Estate. Her mother Princess Anne had a close bond with Her Majesty the Queen 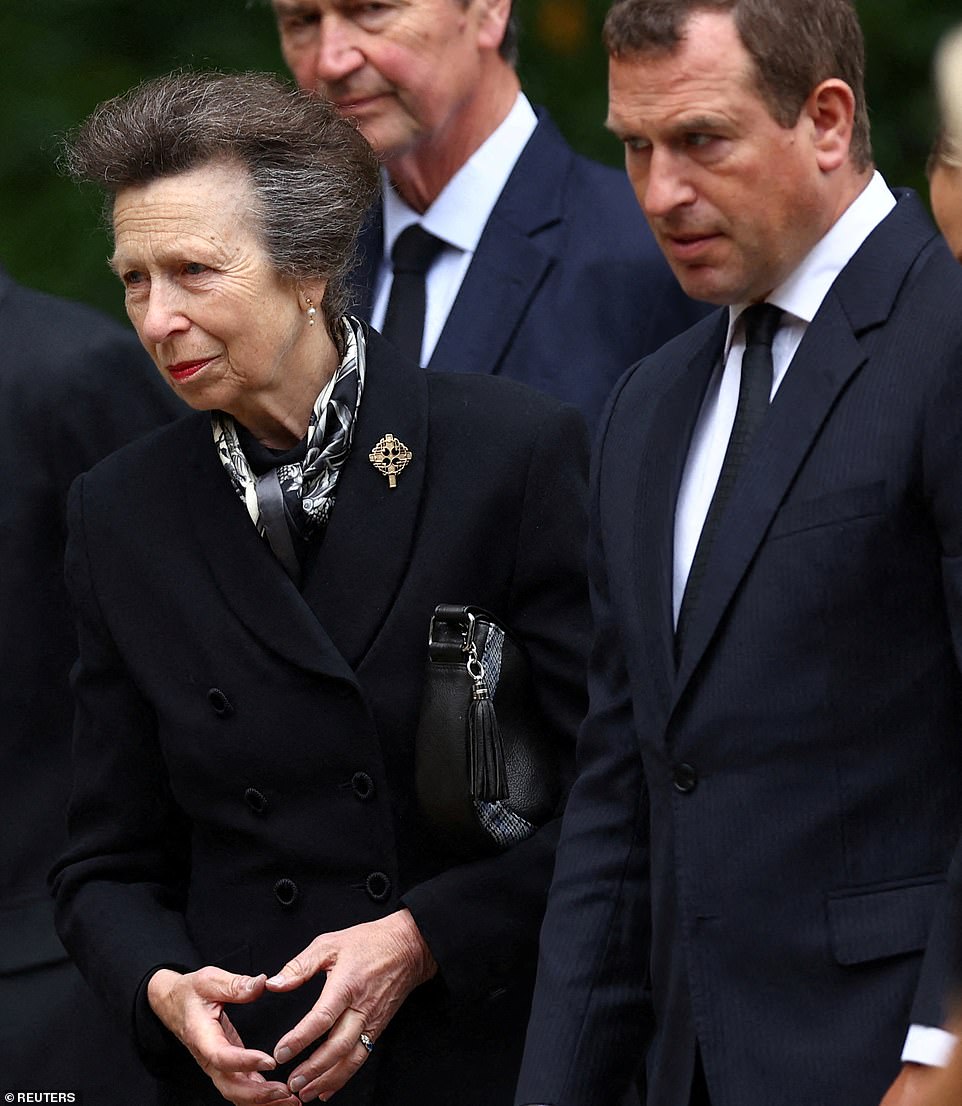 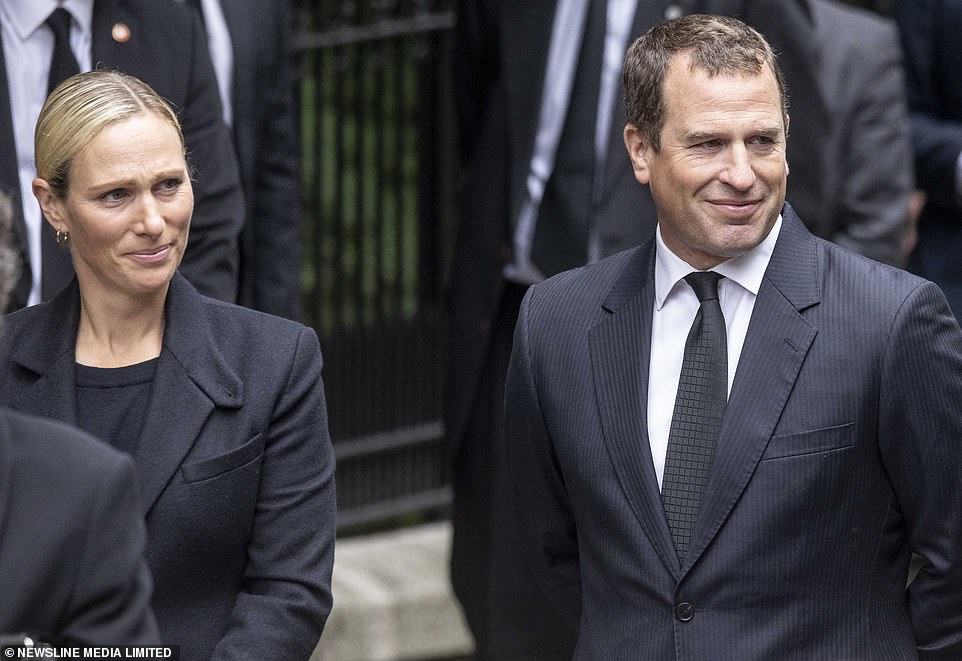 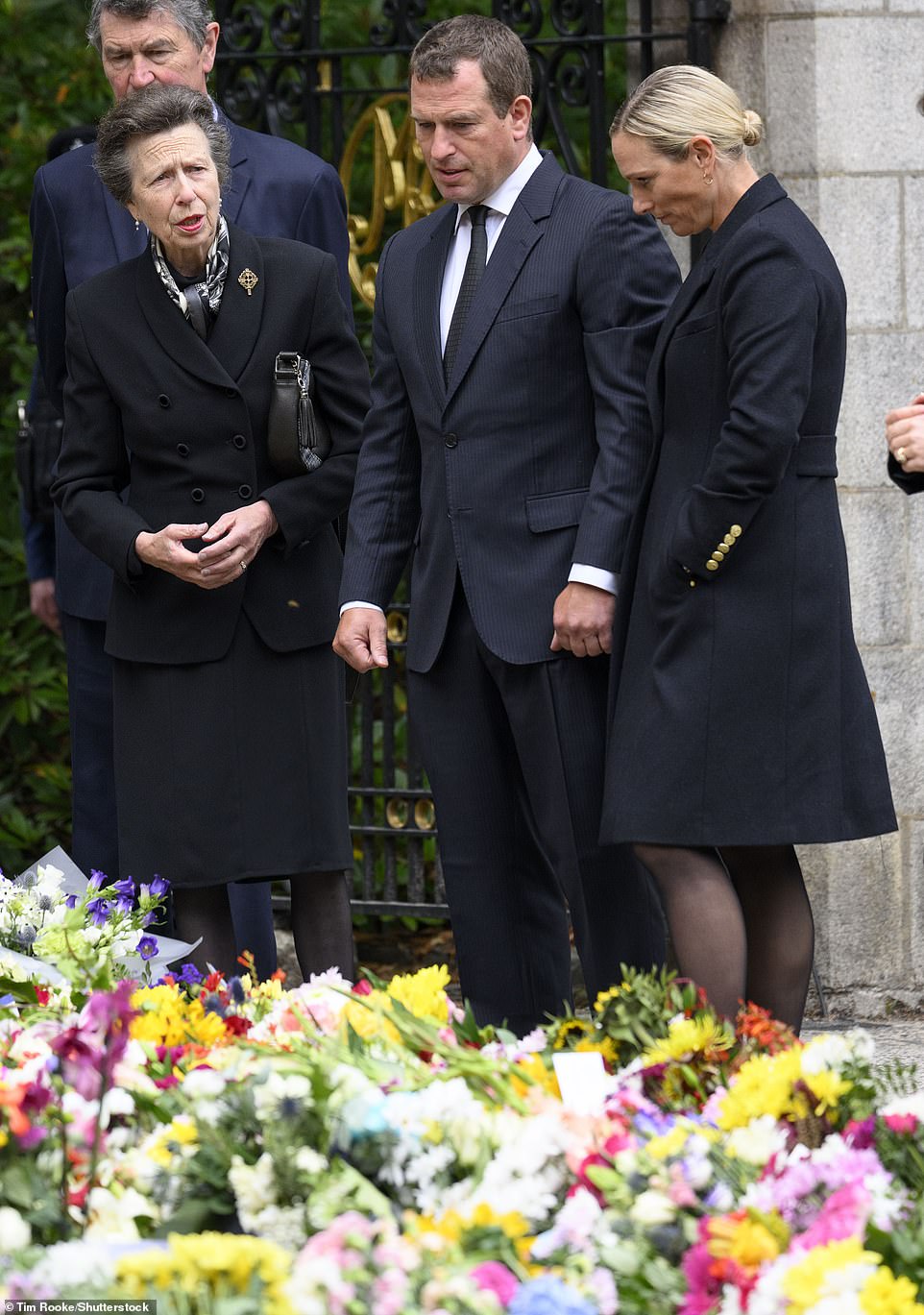 Princess Anne's son Peter said he felt 'incredibly lucky to be able to share a lot of our childhood time' with the monarch, while Prince Andrew's daughter Princess Eugenie has called her 'brilliant'

Princess Anne's son Peter said he felt 'incredibly lucky to be able to share a lot of our childhood time' with the monarch, while Prince Andrew's daughter Princess Eugenie has called her 'brilliant.'

Princess Anne appeared tearful eyed as she was driven to the church earlier today.

She has long been close to the Queen, with whom she shared a love of horses. 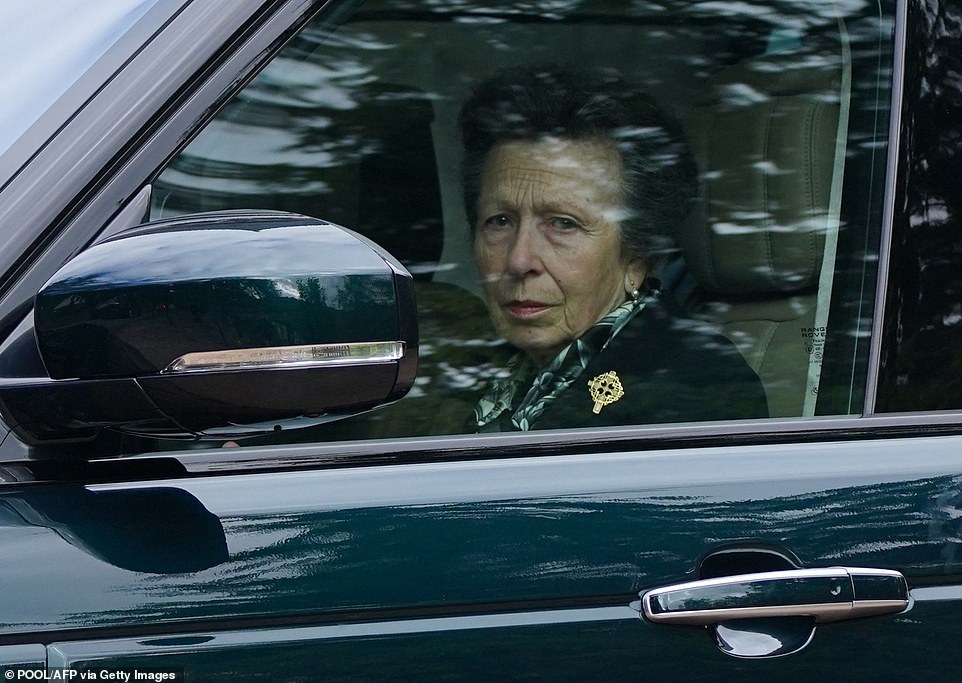 The Queen's only daughter, the Princess Royal, was at the monarch's side when she died peacefully on Thursday aged 96 at Balmoral Castle

In 1987, Anne was honoured by the Queen with the senior title of Princess Royal, which is traditionally, but not automatically, given by the sovereign to their eldest daughter.

In an interview in 2002, Princess Anne defended the Queen against accusations that she was an 'uncaring mother'.

And the royal joined her mother on one of her final engagements in public, accompanying her to visit a hospice in Maidenhead in July.

In a rare interview for a BBC1 documentary to mark the jubilee, she said it is 'extraordinary' for anybody to claim her mother has ever not cared about her children. 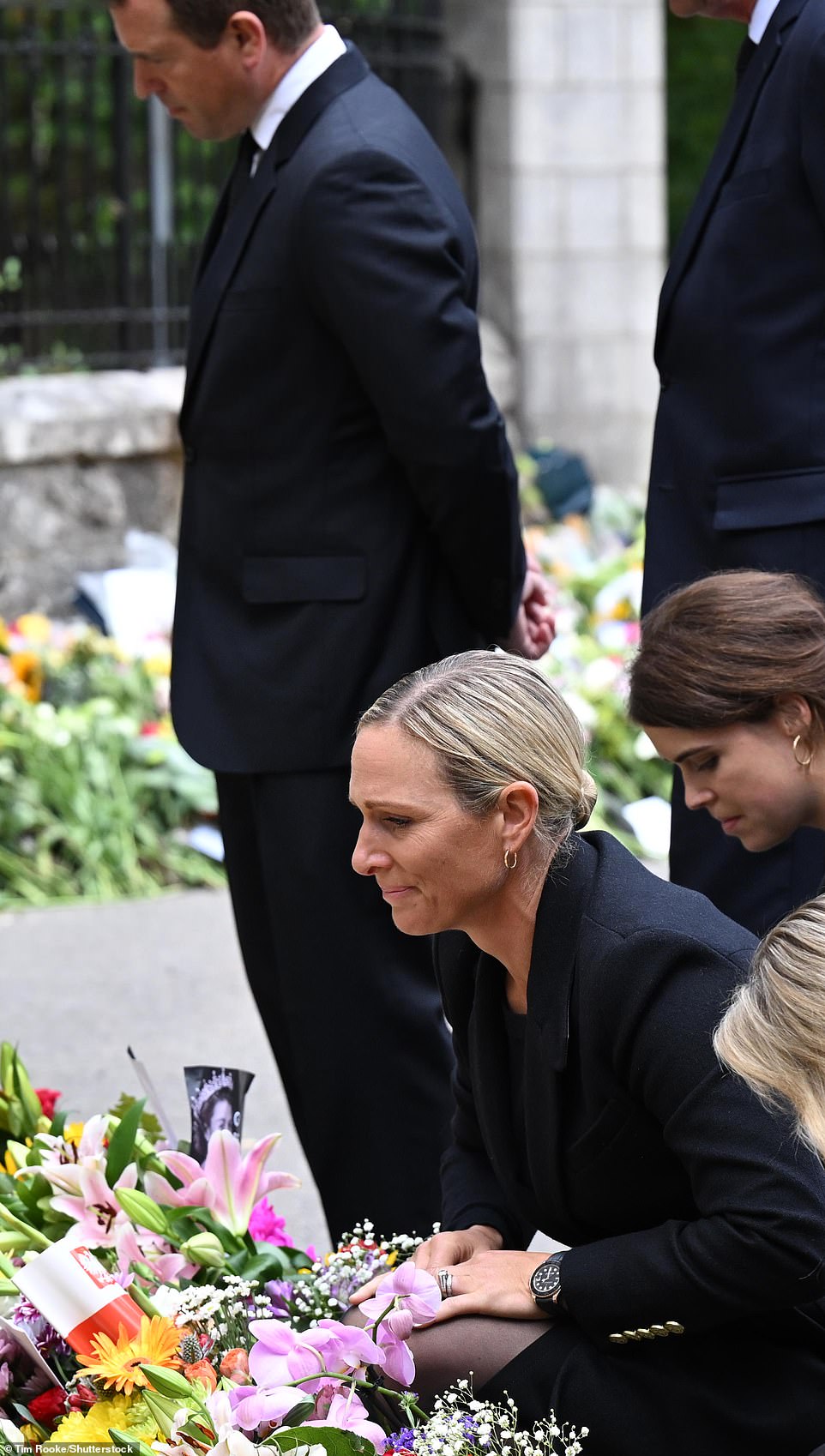 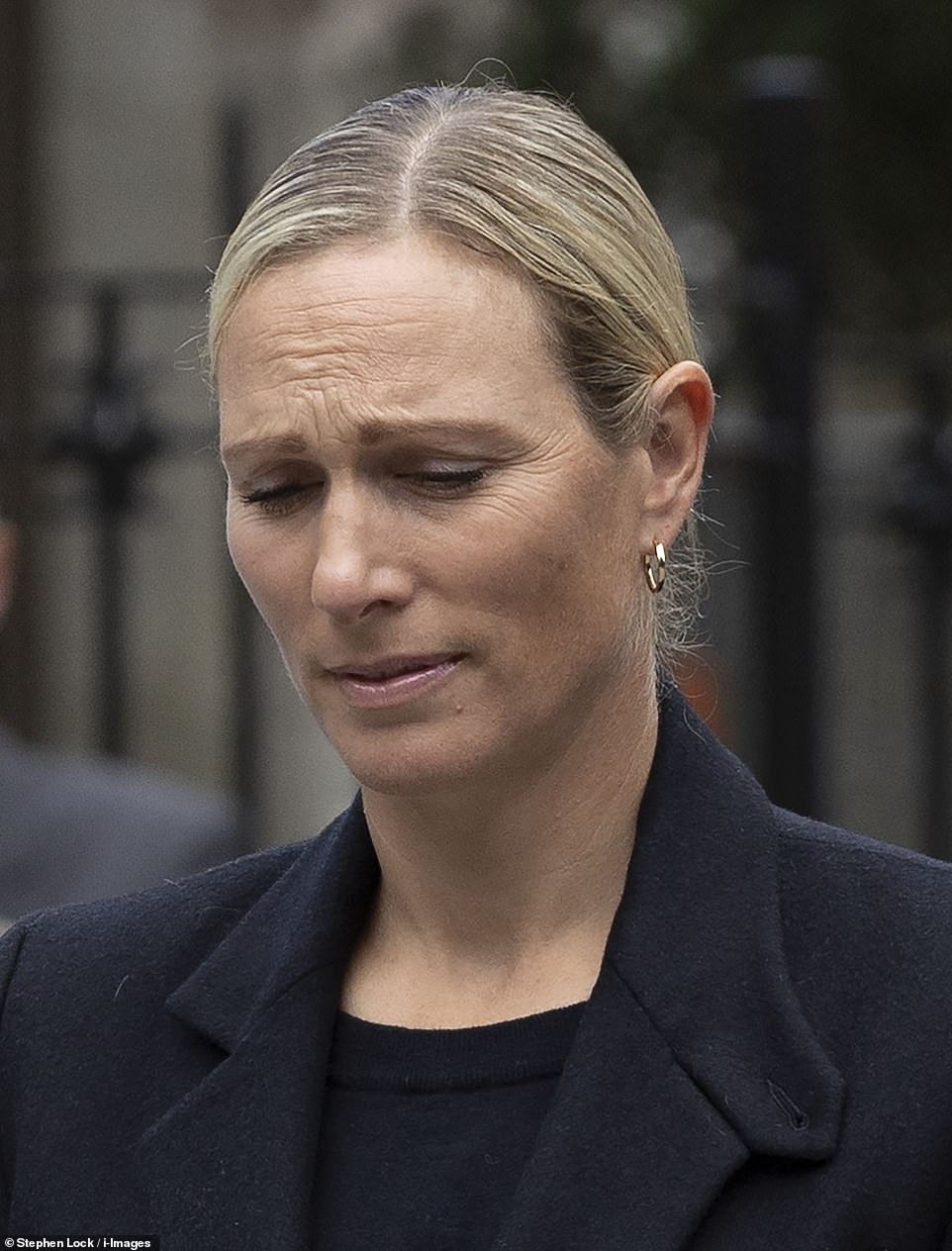 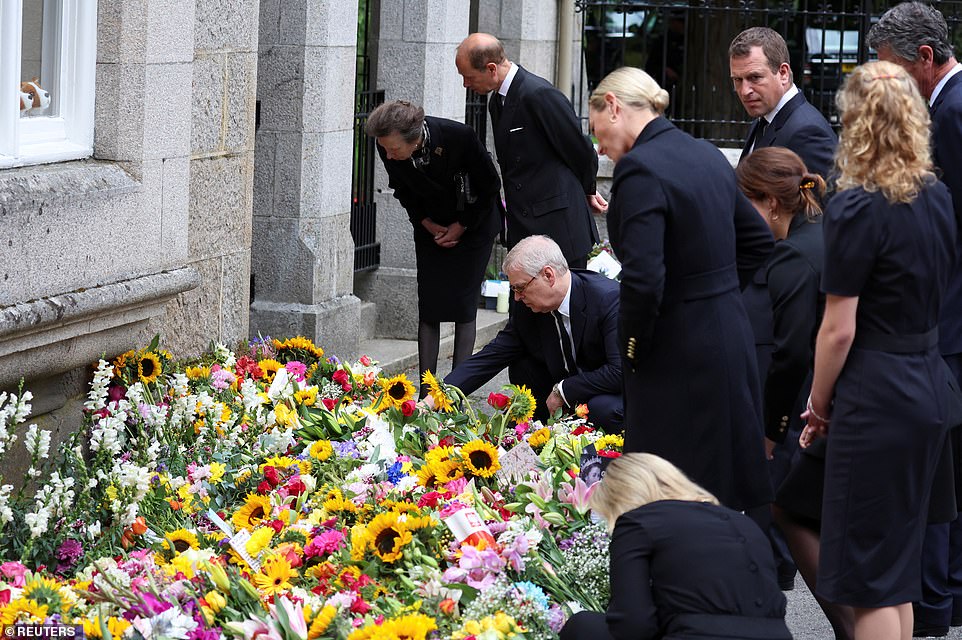 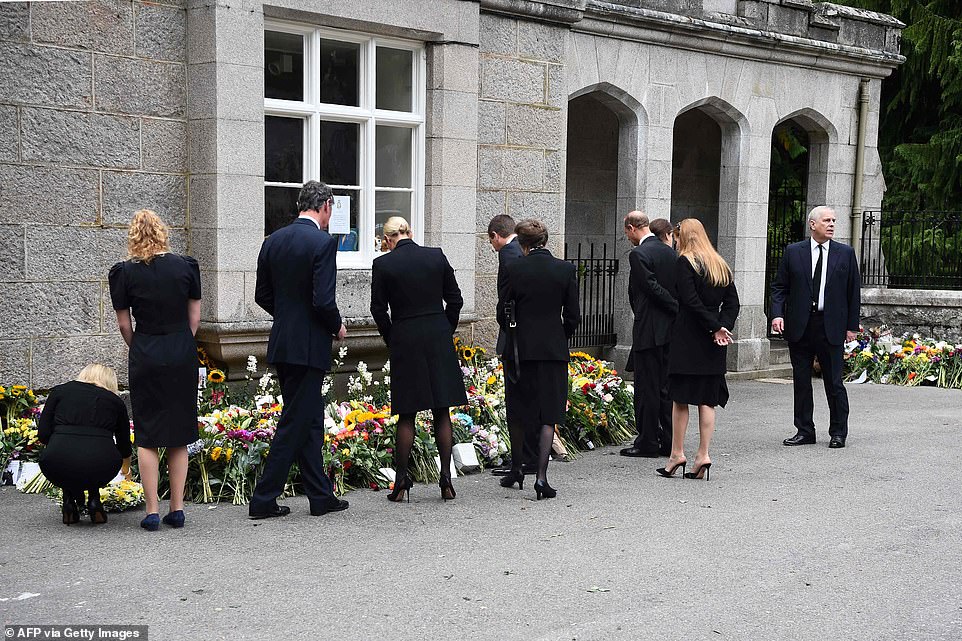 Princess Anne appeared tearful eyed as she was driven to the church earlier today. She has long been close to the Queen, with whom she shared a love of horses 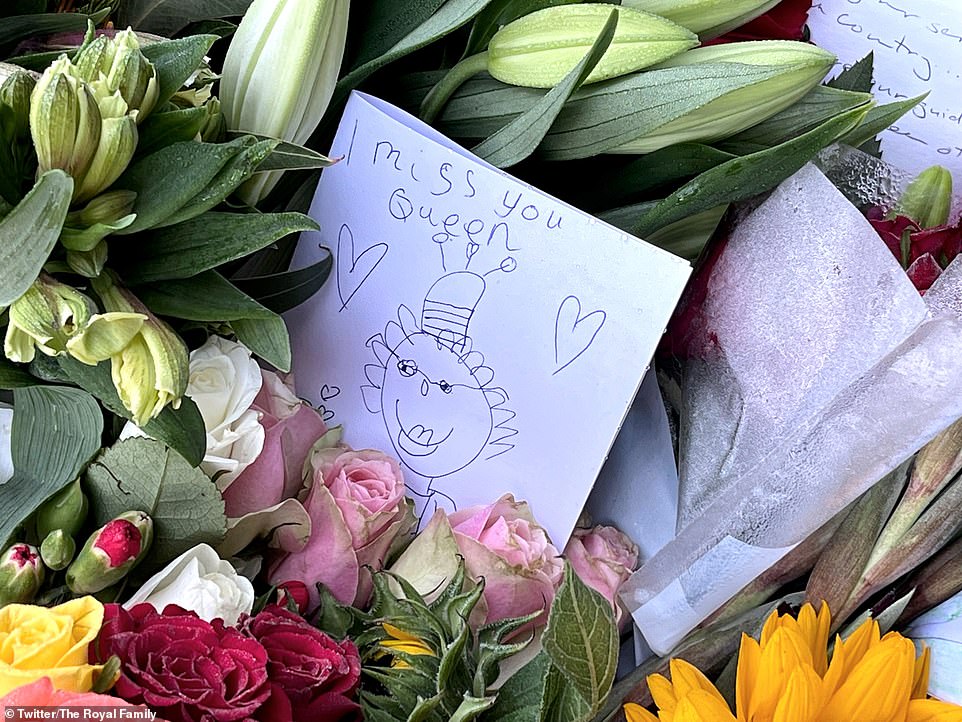 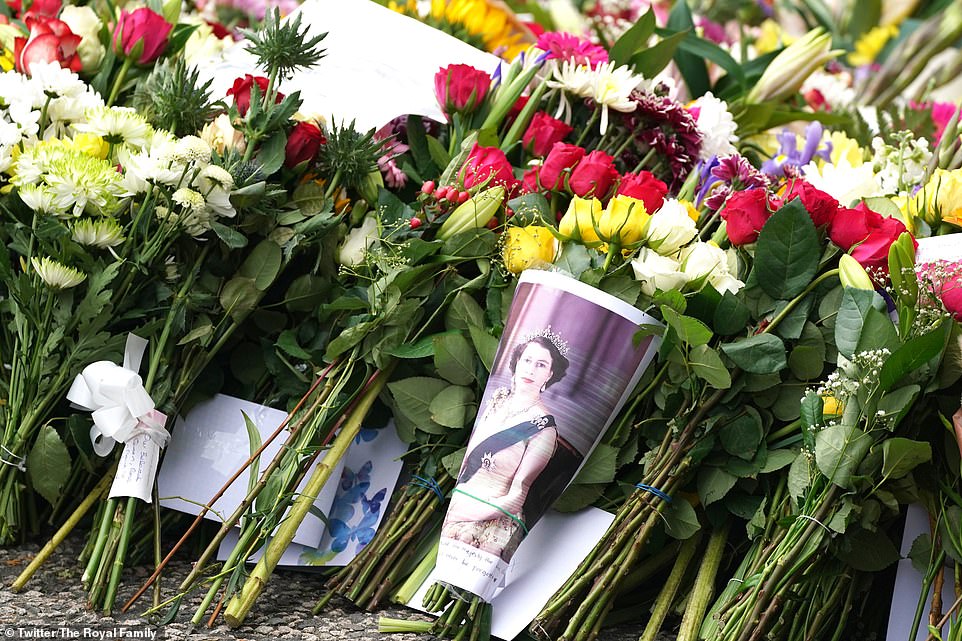 Anne said her mother was never uncaring, although protocol demanded that her children and grandchildren have to bow or curtsey to her and she spent a lot of time apart from them.

In the interview, Anne explained: 'I simply don't believe there is any evidence whatsoever to suggest that she wasn't caring. It just beggars belief.'

She added: 'I don't believe any of us for a second thought that she didn't care for us in exactly the same way as any other mother did. I just think it extraordinary that anybody could construe that that might not be true.'

The princess said she does not understand people who ask her if she sees the Queen as her mother or as a monarch: 'She's my mother and the Queen.'

Shortly before the news of the Queen's death was announced, the Princess Royal joined other members of the royal family in travelling to Balmoral to be with her mother.

It was only she and Prince Charles who were by her side by she died.

They supported Anne throughout the walkabout today, with both appearing teary eyed at the event. 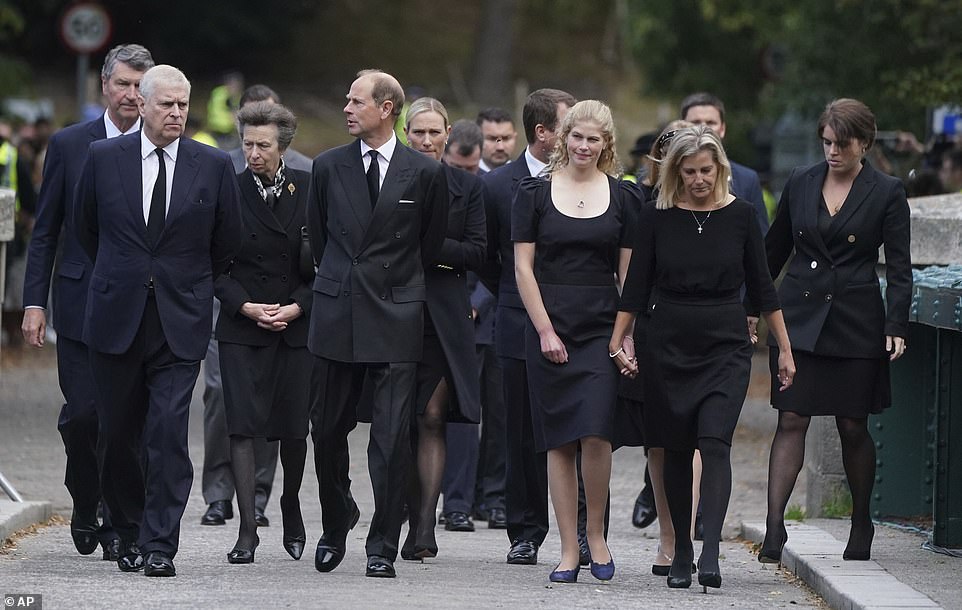 The Duke of York, the Earl of Wessex, Lady Louise Windsor and the Countess of Wessex on a walkabout to thank members of the public Balmoral in Scotland 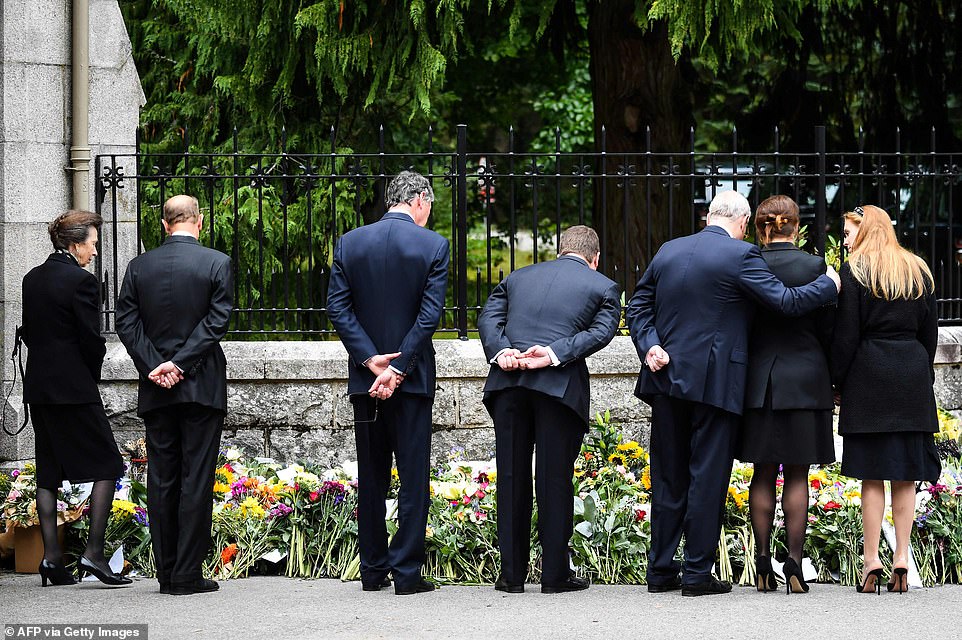 From right to left: Prince Andrew, Duke of York stands with his daughters Princess Eugenie of York and Princess Beatrice of York, along with Princess Anne, Princess Royal, Prince Edward, Earl of Wessex, Vice Admiral Timothy Laurence and Peter Phillips, as they look at the flowers placed outside Balmoral Castle 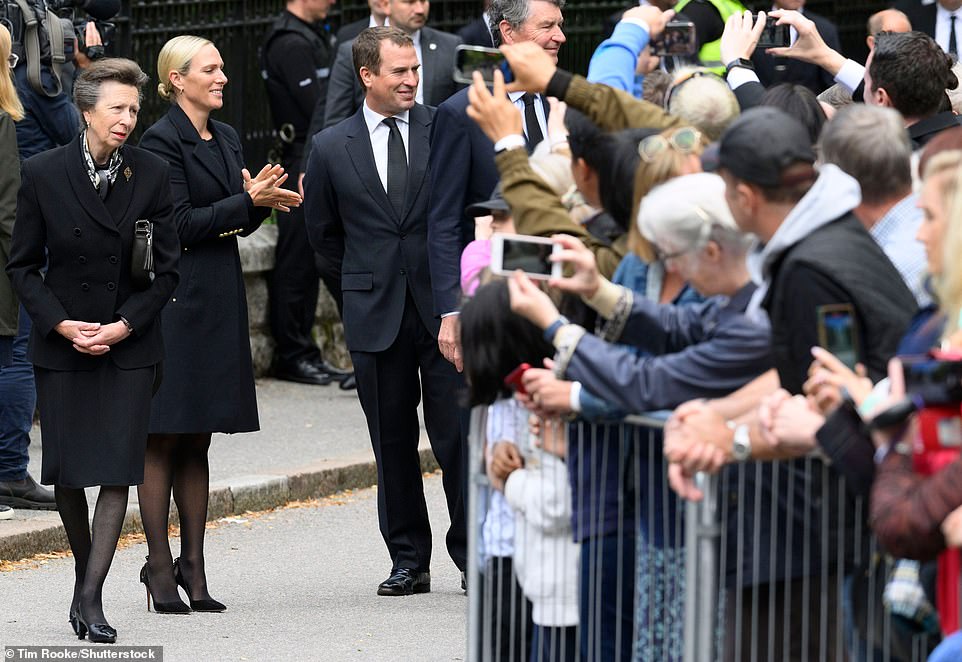 Princess Anne, Zara Tindall and Peter Phillips applauded mourners who turned out to pay their respects to the late monarch 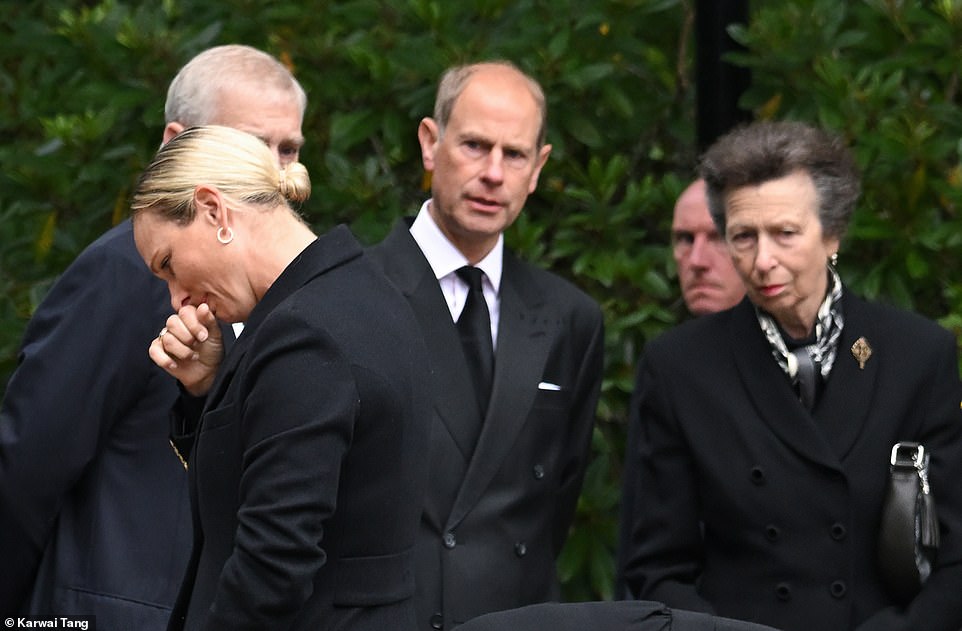 Zara Tindall weeps as she and the Princess Royal, Andrew and Edward attended a private church service in Balmoral today

The Queen's first grandchild was born to Princess Anne and her first husband, Captain Mark Phillips, on November 15, 1977.

He studied at the University of Exeter and married Autumn Kelly, a Canadian national, at Windsor Castle in May 2008. The couple had two daughters, Savannah and Isla, before divorcing in 2021.

Peter has enjoyed a decidedly more low-key life than his cousins Prince William and Prince Harry that started with his mother Princess Anne's decision not to give him and his younger sister Zara, now married to Mike Tindall, any royal titles.

It means Peter and Zara were granted a level of freedom not afforded to titled members of the royal family like William and Harry, and, to a lesser extent, Princess Beatrice and Princess Eugenie. 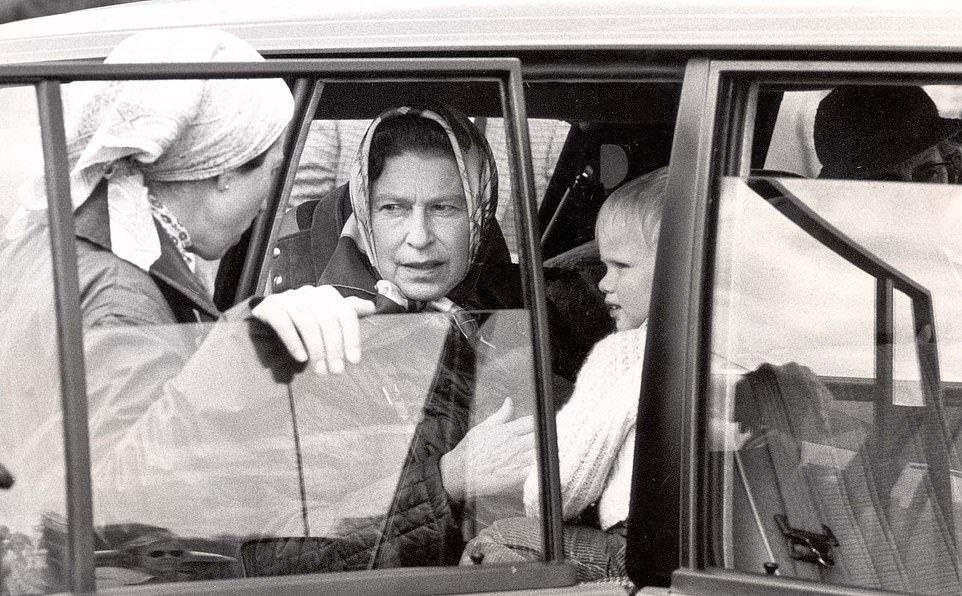 After graduating from the University of Exeter with a degree in sports science, Peter worked for Jaguar as a corporate hospitality manager before taking a position at the Williams Grand Prix Engineering team.

It was on a business trip at the 2003 Montreal Grand Prix where he met Autumn, a former personal assistant who was working as a Budweiser girl at the event.

Not realising he was the Queen's grandson, the pair embarked on a relationship and Mr Phillips popped the question after a few years of dating.

The newlyweds faced public scrutiny when their wedding photos were sold to Hello! magazine for a reported £500,000 fee.

The episode provoked claims the couple had exploited their royal connections and was branded a 'serious error of judgement' by then Lib Dem MP Sir Norman Lamb.

In 2016, Peter spoke candidly about what it's like to have The Queen as his grandmother.

Appearing on ITV's Good Morning Britain, the son of Princess Anne and her first husband Captain Mark Phillips admitted that it is a 'little strange' but said his childhood was an extremely jubilant one.

Speaking to hosts Kate Garraway and Ben Shephard, The Queen's eldest grandchild said: 'I guess it's a little strange but if you're growing up with that sort of thing, there's never really that moment when you go, 'Oh wow'.'

At the time, he admitted he had a lot of fond memories of growing up as part of the royal household and being so close to The Queen.

'We had great fun growing up on our holidays, going to stay with her at Sandringham, Balmoral and Windsor and we were incredibly lucky to be able to share a lot of our childhood time with her,' he said.

'She's such an inspiration, not only to the country but to us as a family.'

He continued: 'You know, her work ethic and her dedication is something that I think the whole family has always inspired to, at least get somewhere near.'

Meanwhile he hinted at the close nature of his relationship with his grandmother when Prince Philip passed away in April 2021.

He said not being able to hug the Queen was the hardest part of the Duke of Edinburgh's funeral.

His sister and Princess Anne's second child, Zara Phillips, was born on May 15, 1981 in London.

Zara has spoken openly about her pride for her grandmother The Queen, including giving an interview after the monarch addressed the nation amid the coronavirus crisis.

Appearing on GMB, the equestrian, 38, said the poignant television address, where Her Majesty urged the the British public to come together and protect the NHS, was '100% what the country needed' at the moment, adding that she 'hopes everyone listens'.

'I think we're obviously very proud', said Zara, 'And what she said is, I think, 100% what the country needed.

'I hope everyone listens and we can try and get back to normal and support our NHS as much as we can.'