You have reached the cached page for https://www.myminifactory.com/object/3d-print-charles-i-of-hungary-in-timisoara-romania-16677
Below is a snapshot of the Web page as it appeared on 1/7/2021 (the last time our crawler visited it). This is the version of the page that was used for ranking your search results. The page may have changed since we last cached it. To see what might have changed (without the highlights), go to the current page.
You searched for: +Who was Charles I of Hungary? We have highlighted matching words that appear in the page below.
Bing is not responsible for the content of this page.
3D Printable Charles I of Hungary in Timisoara, Romania by Alban Pllana

Charles I of Hungary in Timisoara, Romania

3D
Scan The World
2,080 views 57 downloads
Community Prints Add your picture
Be the first to share a picture of this printed object
0 comments Is it a print picture of the object?
Loading comments...

Charles I of Hungary in Timisoara, Romania

Please enter the code below

Charles I, born 1288, Naples, Kingdom of Naples (Italy) died July 16, 1342, Visegrád, Hung. He was the King of Hungary who restored his kingdom to the status of a great power and enriched and civilized it.

Charles was the son of Charles Martel of Anjou-Naples and Clemencia of Habsburg, daughter of the Holy Roman emperor Rudolf I. As great-grandson of Stephen V and with papal approval, Charles claimed the Hungarian throne after the death of Andrew III, the last of the Árpád line, and was crowned in 1301. When his claim was disputed, however, he was forced to surrender the crown to Wenceslas of Bohemia, who in 1305 transferred his right to Otto, duke of Lower Bavaria. After Otto was taken prisoner by the Hungarians, Charles was recognized as king in 1308 and received the Crown of St. Stephen at Székesfehérvár on Aug. 27, 1310.

Foreign policy under Charles was aimed at family aggrandizement, but it also greatly benefited Hungary. In 1335 his alliance with Poland for mutual defense against the Bohemians and the Habsburgs bore fruit in victory over the Holy Roman emperor Louis IV, the Bavarian, and his ally Albert of Austria. Fearing that Hungary might achieve predominance in the Adriatic, Venice and the pope frustrated Charles I’s plans to unite the kingdoms of Hungary and Naples under his eldest son, Louis (the future Louis I the Great). Charles then turned to a pact with his brother-in-law and ally, Casimir III the Great of Poland, whereby they agreed that Louis of Hungary should succeed the childless Casimir.

This object is part of "Scan The World". Scan the World is a non-profit initiative introduced by MyMiniFactory, through which we are creating a digital archive of fully 3D printable sculptures, artworks and landmarks from across the globe for the public to access for free. Scan the World is an open source, community effort, if you have interesting items around you and would like to contribute, email stw@myminifactory.com to find out how you can help.

Easy print with supports on head. 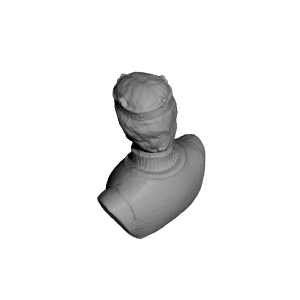 ×
0 collections where you can find Charles I of Hungary in Timisoara, Romania by apllana