You have reached the cached page for https://yowpyowp.blogspot.com/2011/04/yogi-bear-space-bear.html
Below is a snapshot of the Web page as it appeared on 10/13/2020 (the last time our crawler visited it). This is the version of the page that was used for ranking your search results. The page may have changed since we last cached it. To see what might have changed (without the highlights), go to the current page.
You searched for: +Who played Yogi in Yogi and the invasion of the Space Bears? We have highlighted matching words that appear in the page below.
Bing is not responsible for the content of this page.
Yowp: Yogi Bear — Space Bear

Produced and Directed by Bill Hanna and Joe Barbera.

Any Hanna-Barbera fan watching this can’t help but think of ‘The Ten Little Flintstones’ (1964). That’s where a flying saucer lands, takes a picture of Fred, ten small-pupiled, staring duplicates of Fred are made, and a quavery-voiced leader played by Don Messick dispatches them to “mingle with the natives” of Earth before an invasion. Fred eventually chases them back into the saucer and saves the planet. 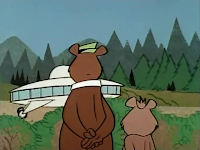 It was written by Tony Benedict, who wasn’t at Hanna-Barbera when this cartoon was written by Warren Foster. Still, the basic opening is the same. A saucer lands at Jellystone Park. Yogi, who’s not very bright for someone who is supposedly crafty, thinks it’s a car with newly-arrived tourists and decides to hit them up for food. A camera emerges, takes pictures of Yogi, then the saucer zooms into space and lands on a ringed planet. A quavery-voiced leader played by Don Messick—yes, using the same voice—talks of invasion plans. The photos of Yogi are used as a guide to make a costume of a “typical Earth inhabitant” worn by an alien who is told to go back to Earth and “mix in with the population.” And at the end of the cartoon, Yogi kicks butt (literally) and presumably saves Earth.

Comes to think of it, in Hanna-Barbera’s very first series, didn’t the two-faced Big Thinker of Muni-Mula want to make Ruff and Reddy look-a-likes to invade the Earth?

Ah, well. Despite the similarities, there’s a still lot to like in this cartoon. The aliens look like something from a ‘50s print ad instead of a ‘50s sci-fi movie. Messick’s alien voice is cool. He even changes pitch and puts it in another alien (he used it on The Herculoids and a number of other times during his career). Don Patterson gets some great expressions at the end of the cartoon out of a streamlined Ranger Smith. The timing of the realisation Yogi hasn’t left is perfect, too. And Yogi’s spit-take is as good as any Catskills comic’s.

An ingenious animation-saving bit is used, similar to when Jinks is zapped by a light socket in ‘Mark of the Mouse.’ When the camera takes a picture of Yogi, no animation is used. Instead, alternating black-and-white drawings are flashed on the screen. 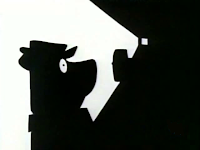 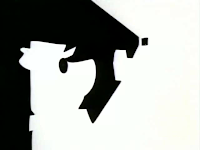 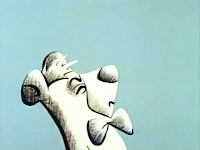 Just to vary the visuals, there’s a cut to a shot of Boo Boo as the flash goes off. I like the brushwork here (or is it pencilwork?). The one thing I don’t understand is how the aliens can build a futuristic space ship but they’re using what looks like an old Bell and Howell home movie camera from the 1950s.

Here are a couple of shots of Saucer X-12 as it weaves to a landing on the unnamed planet. Nice brush-stroke space clouds and varying shades of grey on the planet. The landing tower is kind of art deco. 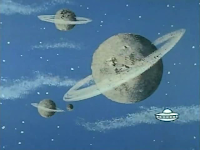 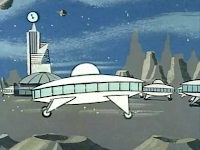 The aliens have ears that curl up from the bottom. Either the model sheet was inconsistent or Don Patterson didn’t pay attention to it. In the scene where the alien leader is showing the photos of Yogi on the big screen, he has only one triangle on his full-length tunic. Later, when he’s giving instructions to the alien disguised as Yogi, he has interlacing triangles and stylised epaulettes. Patterson must have had fun following the dialogue track because he gives the alien mouth movements that waver at the appropriate time. 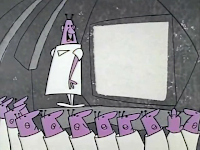 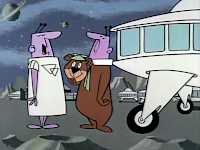 The spaceship and its disguised occupant return to Jellystone and stop in the middle of a road. The fake Yogi gets out and toddles along with a disintegrating ray gun in hand. There’s honking off-camera. “Get out of the road you mangy bear! Come on, beat it!” yells the passenger in a car. Apparently, the presence of a large flying saucer in the road has escaped him. He just notices the bear. You can tell which one he is because he’s not in a brown shadow. The alien aims his ray gun and poof! 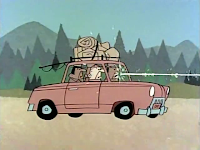 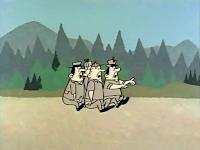 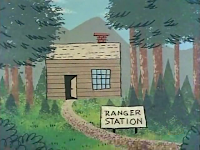 This development, logically, results in a phone call to the Ranger Station. The station looks like something a five-year-old would draw. There are spots in the cartoon where parts of the backgrounds look fairly crude (the letters of “Jellystone” over the park entrance almost look traced) but this is just a bit much. The zig-zag lines indicating fir branches work for me, though.

Inside, the Ranger listens to the phone call concludes “They forget where they park their cars and blame it on the bears.” Meanwhile, Yogi decides to find some tourist-type goodies and jauntily walks past the alien Yogi. “Shee. What a screwy-looking bear,” he remarks. When he goes over to talk to the “bear,” it zaps him. After the flash, we see a headless Yogi. But we all know Hanna-Barbera anatomy. It means the head is really under the collar and pops back up. I’m still not quite sure where the head actually goes.

The fake Yogi is on his way to the Ranger Station, where more calls are pouring in. First the alien zaps the ranger’s desk, then his back wall. The ranger’s okay. He’s only biting his bottom lip because Don Patterson’s animating. 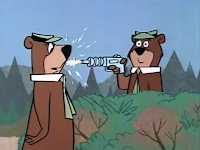 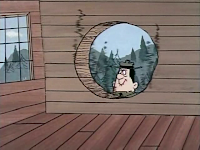 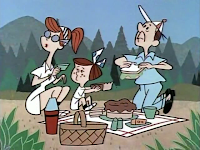 “Attention, all sections of the park!” Ranger Smith blares on a radio. “This is an emergency. A bear has gone berserk. He is armed and dangerous. If you see him, call the ranger station at once. Repeat. A berserk bear is on the loose. He is armed and dangerous. His name is Yogi Bear.” At that point, the thermos-drinking bear does a shock take then a spit take. Patterson stretches out the scene with cycles, too. There’s a picnicking family with a dad chewing and the daughter blinking (the mother does nothing). 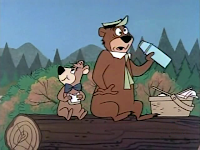 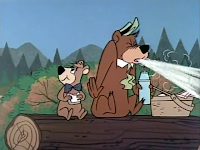 Yogi and Boo Boo hightail it into their cave. Boo Boo notices the disguised alien who Yogi kicks out of the cave. The alien aims the disintegrating ray gun at Yogi but it’s out of whatever. But the Ranger has a regular (presumably loaded) gun he points at the fake Yogi who runs away. “Hey, Yogi, come back,” says the ranger. “I promise you a fair trial.” Just then is a clank and a shot of the space ship taking off. Ranger Smith thinks he’s rid of Yogi. Here’s his exuberance in five drawings; Patterson has him change direction.

“I’m free! I’m free, I tell ya!” shouts the ranger as Yogi walks up to him in that dip walk Patterson used to avoid animating legs. “You certainly are, sir. It’s a free country.” Here’s when the Ranger realises something.

“That voice!” says the ranger as he slowly turns up to see who he’s hugging. The head turns in seven drawings (with a blink tossed in) and returns to the sixth drawing.

“Oh, no! It’s Yogi,” moans Ranger Smith, who then looks at the audience through half-closed eyes and drops down further on Yogi’s body and starts crying. “How about that? I didn’t know he cared,” says Yogi, with an eye roll before the iris closes.

The theme of someone who was something else was a good crutch for Foster in the 1959-60 season. He wrote 13 Yogi cartoons and based eight around the concept:
● A jewel thief pretending to be a bear in ‘Bare Face Bear.’
● Yogi and Boo Boo pretending to be father and son in ‘Papa Yogi.’
● Wee Willie being mistaken for a ranger in ‘Stranger Ranger.’
● Yogi mistaking human football players for real bears, then being mistaken for a mascot from the front office in ‘Rah Rah Bear.’
● Boo Boo being made to think he was a bird in ‘Nowhere Bear,’
● Boo Boo, then, Yogi, pretending to be a toy in ‘Wound-Up Bear.’
● Boo Boo pretending to be Little Red Riding Hood in ‘Hoodwinked Bear.’
● And this cartoon where an alien pretends to be Yogi.

The sound cutter pulls out a bit of spacey music, not as much as you hear in the Muni-Mula stories on Ruff and Reddy as only part of this is set in space. One of the Loose-Seely “Ghost” cues (actually written by David Rose) makes an appearance and there’s one of Phil Green’s eerie flute and bassoon underscores when the alien shows the snaps of Yogi. It was used in at least one other cartoon. And we get the creepy mysterioso muted trumpet bed that may have come from the Omar library distributed by Capitol.

We Yowp For Yowp