You have reached the cached page for https://yowpyowp.blogspot.com/2014/04/yogi-bear-acrobatty-bear.html
Below is a snapshot of the Web page as it appeared on 10/22/2020 (the last time our crawler visited it). This is the version of the page that was used for ranking your search results. The page may have changed since we last cached it. To see what might have changed (without the highlights), go to the current page.
You searched for: +Who played Yogi in Yogi and the invasion of the Space Bears? We have highlighted matching words that appear in the page below.
Bing is not responsible for the content of this page.
Yowp: Yogi Bear — Acrobatty Bear 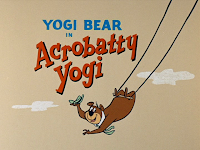 As a kid, I liked watching Yogi Bear outwit Ranger Smith. And I thought it was funny hearing him mispronounce “filet mignon”—even I knew it was wrong—then seeing him getting kicked out of France. And I laughed watching him getting chased around by a dog who would only say “Yowp.”

But a love story? What kid wants to see that? Especially in a cartoon. I sure didn’t.

Yet Hanna-Barbera thought I and millions of others did. The studio dug into this cartoon, lifted the ideas of a Yogi-Cindy relationship, the circus, and the evil ringmaster, added the snickering dog concept from the Huck cartoons, sprinkled in a few songs and mixed it all into a feature film.

Gak!! Let parents watch that tedious relationship stuff and on their own time. I want to see Yogi running over sleeping-bagged campers on a motor scooter.

And worse still, said me-as-a-kid, Cindy isn’t even interested in him in this cartoon. First, she liked his handstand. Now, she doesn’t. She walked away from him. Why is Yogi wasting his time with her? If someone doesn’t like you, don’t you ignore them and hang out with someone else?

Little did I know that not too many years later, I would see guys make complete asses out of themselves over uninterested or fickle women. Obviously, little boys are smarter than adults.

So it is with such childhood baggage that I look again at this cartoon some five decades later.

Actually, writer Warren Foster reused a couple of his early Yogi plots in this cartoon. In “Love Bugged Bear” the previous season, Yogi put up with physical abuse by a girl bear because he was love-struck and was rewarded by having her run off with another bear. And in “The Biggest Show-Off on Earth,” Yogi joins the circus thinking he’s a star, but gets mistreated during his act and finally decides to quit and go back to Jellystone Park.

Journeyman Bob Bentley animated this cartoon. Schlesinger, Fleischer, MGM, Lantz, UPA, he had worked at all those studios. I’m probably missing some (yes, I know, he worked elsewhere after Hanna-Barbera) . In this one, he emulates Mike Lah’s animation at H-B a few years earlier and has characters speaking without a jaw. Just a mouth moves. Here are some examples. Cindy has a black mouth line but only red lips animate and they don’t stay attached to the line all the time. 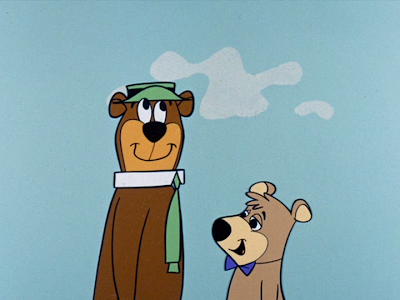 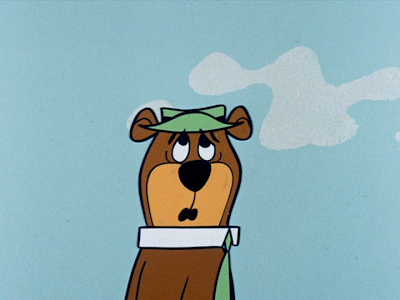 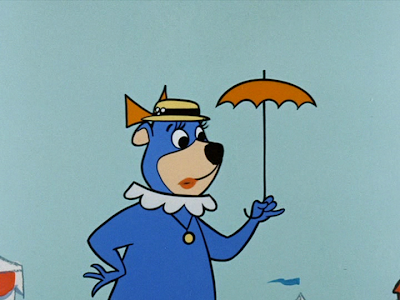 You’ll notice above that Boo Boo has a string around his bow tie and that Cindy’s fingers are crooked all over the place. Bentley has his characters in an advanced state of arthritis in various portions of the cartoon. The fingers don’t twiddle, like they would if Carlo Vinci were animating. 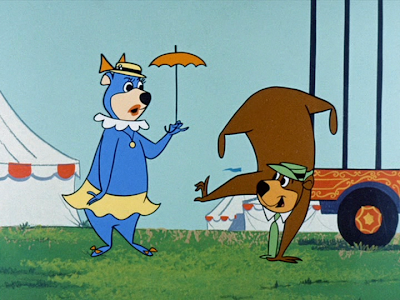 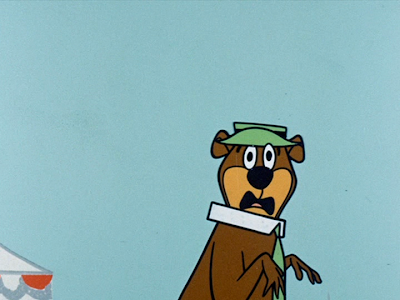 And another example of how animators didn’t work straight ahead. These are consecutive frames. Yogi isn’t even close to being in the same place, let alone position. 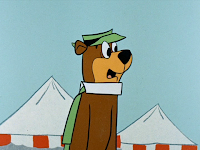 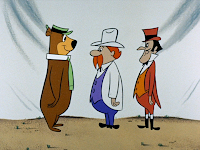 The cartoon opens with Yogi and Boo Boo watching a circus caravan with a truck that has a fender that keeps changing color. 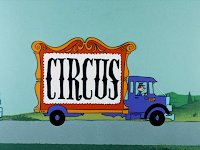 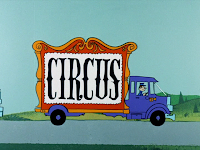 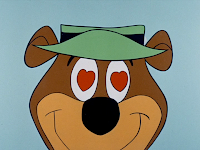 They notice one of the trucks is marked with Cindy Bear’s name. Yogi is “still carrying a torch” for Cindy. You can tell by looking into his eyes. Yogi decides to jump onto the caravan and reunite with Cindy, even though Boo Boo warns “the ranger said you’re not supposed to leave the park.” Ranger Smith isn’t in this cartoon; this is the last cartoon where he wouldn’t make an appearance. 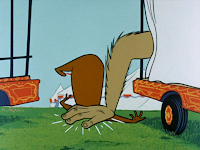 The next scene’s in the future. Yogi’s looking for Cindy in the circus. He gets crushed by the huge hand of Colosso the Gorilla. Southern belle Cindy appears; romantic Southern belles appeared on network radio in the ‘40s, especially Shirley Mitchell on “The Great Gildersleeve” and Veola Vonn on a number of shows (Jack Benny’s being one). She’s not interested in Yogi. He doesn’t take the hint. Meanwhile, the Southern Colonel circus owner and sadistic ringmaster (layout man Dan Noonan has designed him like Norton South and other bad guys who had appeared on Quick Draw McGraw cartoons) need someone to take Charlie’s place (“Good old Charlie,” they say, placing their hats on their hearts in remembrance of their late lion tamer) and hire Yogi, who thinks being in the circus will win Cindy’s heart. Don’t do it, Yogi! You’re wasting your time! Ah, bears never listen to little boys yelling at the TV. 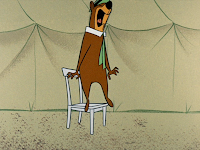 The evil ringmaster whips Yogi when the bear sits down in the chair he’s supposed to use to learn how to fend off lions, though the ringmaster never explains that it’s all part of a potentially-deadly lion-taming act. There’s a really nice drawing of Yogi yelling that could have been used for the basis of a take. Instead of holding it and widening it, or doing a Vinci-like vibration, it’s on screen for two frames and that’s it. The opportunity for a take is wasted. Instead we get an inside joke. Yogi: “As Quick Draw McGraw says, ‘ooh, that smarts’!” But instead of Yogi objecting to the abuse, he simply takes it. And nowhere before the end of the cartoon does the bad guy get punished for his behaviour.

Finally, the show goes on, but not before Yogi gives us an Ed Sullivan reference and refers to it as “The Shoe.” We get some Yogi rhymes: “That Cindy’s great on a roller skate” and “Don’t look so forlorn, a star is born.” Wait a minute. Yogi passes the ringmaster. But then the ringmaster’s at the door of the lion cage to let him in. How could that happen? 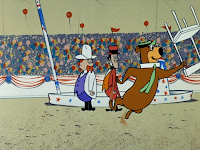 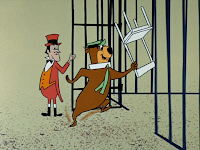 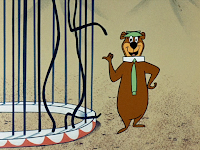 The rest of the cartoon involves Nero the lion chasing Yogi all around the circus (“That’s my cue to skidoo”; “I ask you, what else could I do?”), but the audience loves it. They think it’s part of the act. Seems to me that’s a hoary old cartoon plot. Cindy praises Yogi. Finally the bear wises up and makes fun of her, basically telling her he could have been killed trying to impress her. He runs back to Jellystone, with the lion chasing right behind him. He grabs Boo Boo, slams the door shut and the two hide under the covers to end the cartoon.

Cindy returns later in the season, including in another cartoon where she’s willing to give her momentary affections to whichever bear hands her the most material goods. Tell her to stick her shallowness and capriciousness, Yogi! Ah, but he won’t. We kids are smarter than the smarter-than-the-average bear, it would appear.
Posted by Yowp at 06:38

We Yowp For Yowp