You have reached the cached page for https://www.rottentomatoes.com/m/the_last_metro
Below is a snapshot of the Web page as it appeared on 11/26/2020 (the last time our crawler visited it). This is the version of the page that was used for ranking your search results. The page may have changed since we last cached it. To see what might have changed (without the highlights), go to the current page.
You searched for: +What is the last Metro? We have highlighted matching words that appear in the page below.
Bing is not responsible for the content of this page.
The Last Metro (Le Dernier Métro) (1981) - Rotten Tomatoes
Home
Top Box Office
Tickets & Showtimes
DVD & Streaming
TV
News 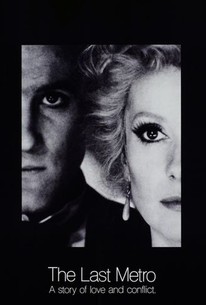 When the Nazis occupy Paris, Jewish theater owner Lucas Steiner (Heinz Bennent) goes into hiding in the cellar, ceding control of the theater to his gentile wife, Marion (Catherine Deneuve). She mounts a new play, and gives a break to upstart actor Bernard Granger (Gérard Depardieu) by casting him in the lead. The two soon develop feelings for one another, and she is torn between the two men. Things grow ever more complicated when Marion discovers that Bernard is harboring a secret of his own.