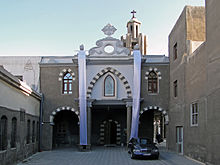 Seat of the Syriac Catholic Church in Damascus

The Syriac Catholic Church (Syriac: ܥܕܬܐ ܣܘܪܝܝܬܐ ܩܬܘܠܝܩܝܬܐ ʿīṯo suryaiṯo qaṯolīqaiṯo) is a Christian church in the Levant having practices and rites in common with the Syriac Orthodox Church. They are one of the Eastern Catholic Churches following the Antiochene rite, the Syriac tradition of Antioch, along with the Maronites and Syro-Malankara Christians. This is distinct from the Greek Byzantine rite of Antioch of the Melkites, both Orthodox and Catholic. Their head, the Syriac Catholic Patriarch of Antioch, lives in Beirut, Lebanon. They have a separate church organization from the Melkites, Maronites, and Chaldean Catholics, which are other communities of the Levant also in full communion with Rome.

The Syriac Catholic Church belongs to the See of Antioch (which, prior to his departure to Rome, Saint Peter had established) and extends it roots back to the origins of Christianity in the Orient. And in the Acts of the Apostles we are told that it is in Antioch where the followers of Jesus for the first time were called "Christians" (Acts 11:26).

In the time of the first Ecumenical Councils, the Patriarch of Antioch held the ecclesiastical authority over the Diocese of the Orient, which was to be extended from the Mediterranean Sea to the Persian Gulf. Its scholarly mission in both languages: the Greek and Syriac was to provide the world and the Universal Church with eminent saints, scholars, hermits and pastors. Among these great people are Saint Ephrem (373), Doctor of the Church, Saint Jacob of Sarug (521) Dionysius Bar Salibi (1171) and Gregorius X Bar Hebraeus (1286).

The Patriarch of Antioch and all the East of the Syrians presides upon the Patriarchal Eparchy of Beirut and leads spiritually all the Syriac Catholic Community around the world.

The Syriac Rite is rooted in the old tradition of both the churches of Jerusalem and Antioch and has ties with the ancient Jewish Berakah and is usually called the Western Syriac Rite. The main Syriac Liturgy is called the "Anaphora of Saint James" (brother of the Lord).

Their ancient Semitic language is known as Aramaic (or "Syriac" after the time of Christ since the majority of people who spoke this language belonged to the province of "Syria"). It is the same language that was spoken by Jesus, Mary and the Apostles and is still the language used during the liturgy. Many of the ancient hymns of the Church are still maintained in this native tongue although several have been translated into Arabic, English, French and other languages to benefit the faithful.

Syriac is still spoken in some few communities in eastern Syria and northern Iraq, but for most, Arabic is the vernacular language.[1]

The Syriac Catholic Church was formally and officially united with Rome in 1781.

The formation of the Church

During the Crusades there were many examples of warm relations between Catholic and Syriac Orthodox bishops. Some of these bishops seemed favourable to union with Rome, but no concrete results were achieved. There was also a decree of union between the Syriac Orthodox and Rome at the Council of Florence November 30, 1444 but the effects of this decree were rapidly annulled by opponents of the union among the Syriac hierarchy.

Jesuit and Capuchin missionaries began to work among the Syriac Orthodox faithful at Aleppo in 1626. So many of them were received into communion with Rome that in 1662, when the Patriarchate had fallen vacant, the Catholic party was able to elect one of its own, Andrew Akijan, as Patriarch of the Syriac Church. This provoked a split in the community, and after Akijan’s death in 1677 two opposing patriarchs were elected, one being the uncle of the other, representing the two parties (one pro-Catholic, the other anti-Catholic). But when the Catholic Patriarch died in 1702, this very brief line of Catholic Patriarchs upon the Syriac Church's See of Antioch died out with him.

In 1782 the Syriac Orthodox Holy Synod elected Metropolitan Michael Jarweh of Aleppo as Patriarch. Shortly after he was enthroned, he declared himself Catholic and in unity with the Pope of Rome. After this declaration Jarweh took refuge in Lebanon and built the still-extant monastery of Our Lady at Sharfeh. Since Jarweh there has been an unbroken succession of Syriac Catholic Patriarchs.

In 1829 the Turkish government granted legal recognition to the Syriac Catholic Church, and the residence of the Patriarch was established at Aleppo in 1831. Catholic missionary activity resumed. Because the Christian community at Aleppo had been severely persecuted, the Patriarchate was moved to Mardin (now in southeast Turkey) in 1850.

The steady Syriac Catholic expansion at the expense of the Syriac Orthodox was ended by the persecutions and massacres that took place during World War I (Assyrian genocide). More than half of the 75,000 Syriac Catholics were massacred by Turkish nationalists (especially so-called Young Turks). In the early 1920s the Catholic Patriarchal residence was therefore moved to Beirut, to which many Syriac Catholics had fled from Turkish and intra-Syria terror.

The Syriac Catholic Patriarch always takes the name "Ignatius" in addition to another name. Although Syriac Catholic priests were bound to celibacy by the Syriac Catholic local Synod of Sharfeh in 1888, there are now a number of married priests. A patriarchal seminary and printing house are located at Sharfeh Monastery in Lebanon.

Rest of the World

On 31 October 2010, 58 Iraqi Syriac Catholics were killed by Muslim extremists while attending Sunday Mass, 78 others were wounded. The attack by Muslim terrorists on the congregation of Our Lady of Deliverance Syriac Catholic Church was the bloodiest single attack on an Iraqi Christian church in recent history.[5]

All translations of Syriac Catholic Church