You have reached the cached page for https://mymodernmet.com/what-did-the-romans-eat-drink/
Below is a snapshot of the Web page as it appeared on 4/13/2021 (the last time our crawler visited it). This is the version of the page that was used for ranking your search results. The page may have changed since we last cached it. To see what might have changed (without the highlights), go to the current page.
You searched for: +What did women do in ancient Rome? We have highlighted matching words that appear in the page below.
Bing is not responsible for the content of this page.
What Did the Romans Eat and Drink? Learn About Ancient Dining & Diets
Home / History

What Did the Romans Eat and Drink? Learn About Dining and Diets in the Ancient Empire 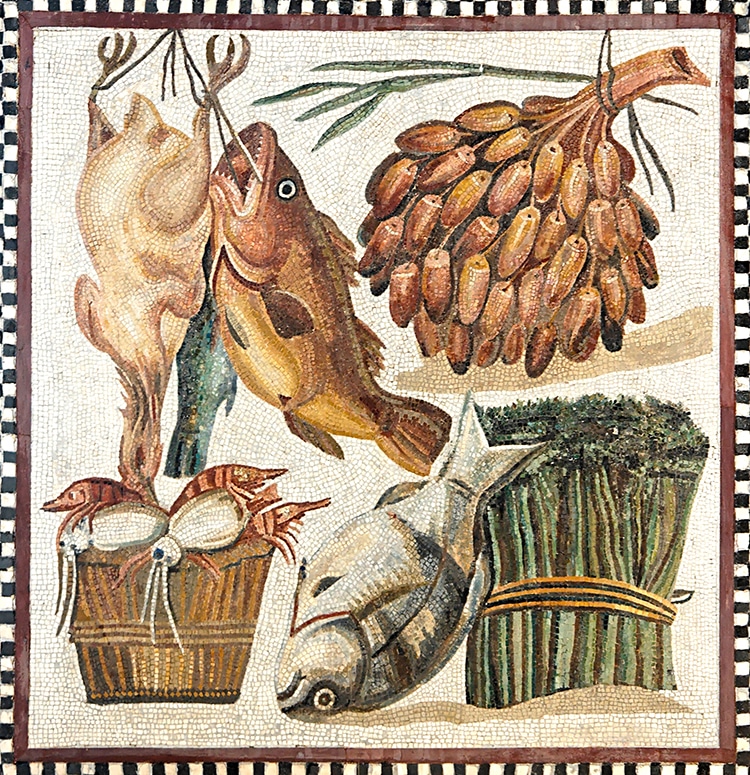 Have you ever wondered what the ancient Romans ate? After all, their lavish banquets are legendary, but the focus on the ultra-elite obscures a wider Roman culinary tradition. The diets and dining habits of everyday people throughout the Roman Empire varied greatly. Many provinces adapted their pre-Roman cuisines to take advantage of new trade networks within the empire.

Italian wine was drunk in Gaul while grain from Northern Africa supplied populations across the Mediterranean. The food and drink consumed throughout Roman lands also changed over time as new territories were gained and fashions changed. To ask “what did the Romans eat?” is to delve into a world of gastronomical diversity.

Across the empire, Ancient Roman food and drink were varied and diverse, but always interesting. Scroll down for a brief introduction to its culinary history.

Logistics of Dining in Ancient Rome 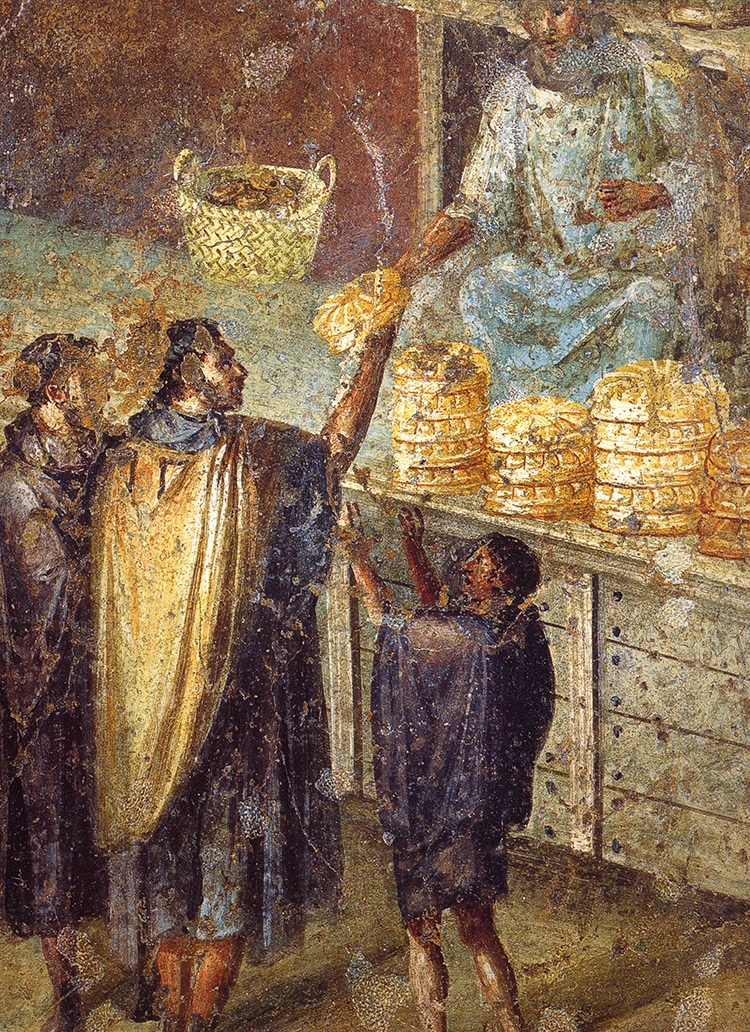 There are a variety of sources from which historians and archeologists can draw information on Roman diets and dining. Archeologists at ancient sites encounter pots, pans, and utensils which all provide clues of their ancient importance. Mosaics and frescos also depict food and dining. In a more technical approach, researchers can also use ancient garbage and waste deposits to look for organic remnants of ancient food.

To complement this knowledge, scholars of the classics find references to food and drink frequently occurring in the works of ancient philosophers, playwrights, and poets. Part of everyday life, these casual references to food can be illuminating. There are also Roman texts addressing food and drink, such as medicinal texts recommending concocted treatments. An ancient Latin cookbook known as Apicius was compiled during the first few centuries CE. The recipes listed include poultry, seafood, vegetables, and other ingredients. For adventurous cooks, the cookbook is free to explore in its entirety through Project Gutenberg. 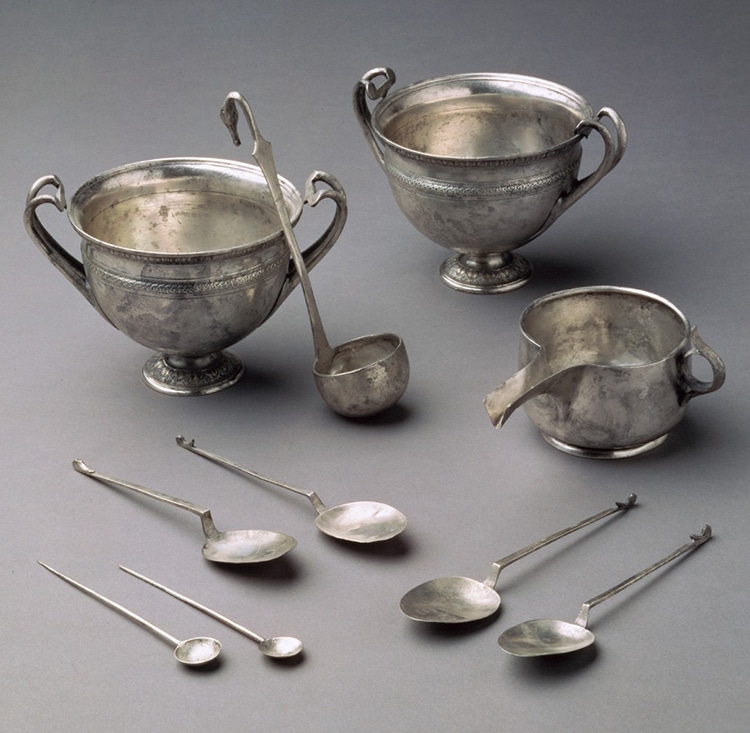 Imperial Romans ate three main meals a day: ientaculum in the morning, prandium midday, and the largest, latest meal known as cena. Some, especially the laboring class, maintained a late evening meal known as vesperna. What was eaten at each meal could vary greatly by social class and economic status. However, a typical ientaculum could include bread, fruit, and cheese. Eggs and vegetables might be eaten at prandium. The best dishes were saved for cena, which for the upper classes was a leisurely multi-course meal eaten while reclining on dining couches in a triclinium (dining room). These wealthy households had chefs to prepare their banquets. Socializing was an important part of the meal. Unlike at Greek symposiums, respectable women mingled with men at Roman banquets.

A sculpted silver spoon and fork combination utensil from the 3rd century CE. On the handle is a spotted panther (associated with the god Dionysus). (Photo: The Metropolitan Museum of Art [Public domain])

Much like today, dining etiquette depended on context. In upper-class households, diners reclined on special couches arranged around a table. Romans customarily propped themselves up on their left elbows while eating. For utensils, individuals primarily used spoons while forks could be used to serve dishes. Toasts were given with dual-handled cups made of silver, clay, or glass. Wine was flavored to each guest's tastes. Over the course of three or more courses, diners ate, drank, and enjoyed performances of music and dancing. Wealthy hosts wanted to impress their guests with fabulous dishes and enjoyable company—few expenses were spared.

There were many locations to eat out in Ancient Roman cities. Taverns, inns, and market stalls produced ready-made meals to eat in or take out. However, dining in such establishments was typically a lower-class activity. Working people lacked the massive kitchens and chefs of the wealthier households. As sex workers could often be found in public food establishments, these places had a poor reputation in the opinion of more well-to-do Romans.

What food was eaten? 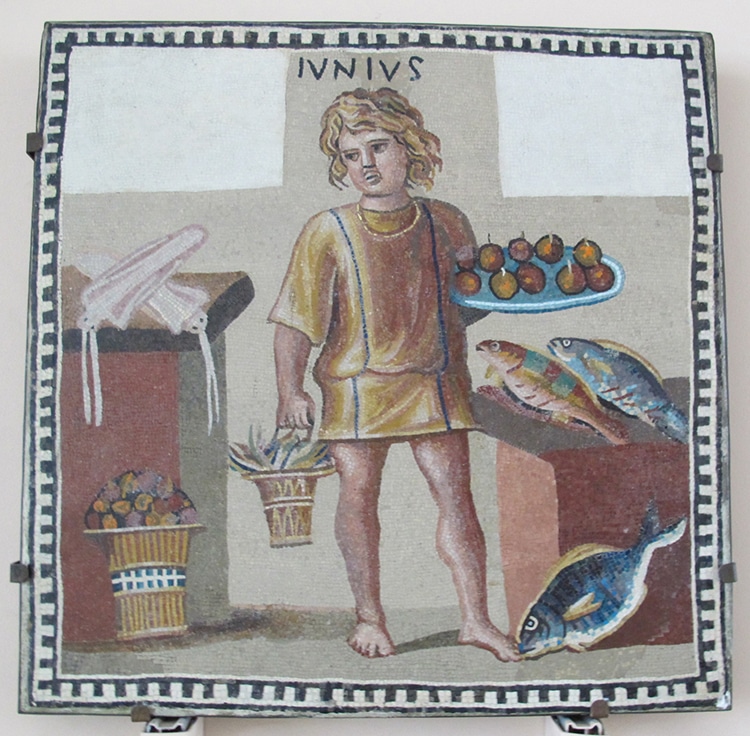 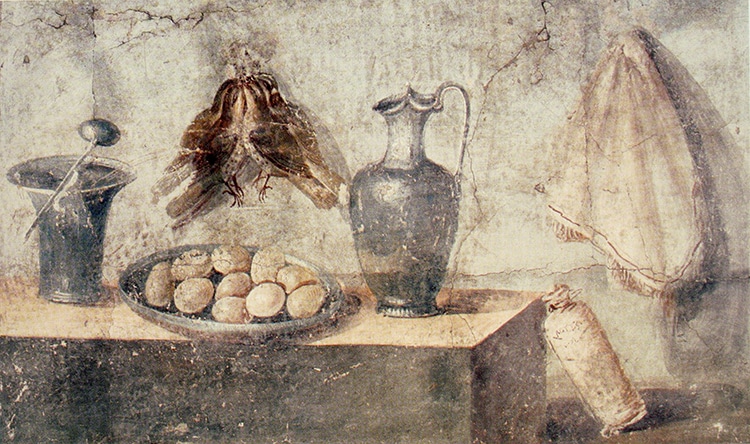 The Ancient Romans ate seafood, fowl, and red meat. Many of the poorest Romans could only afford occasional cuts, but the wealthy were spoiled for choice. Common meats included pork, mutton, ducks, and geese. Wild game such as rabbit, hare, and boar was also eaten. Fowl such as qual, partridges, and pheasants could be prepared. Meat could be salted, dried, or otherwise preserved for storage. Oysters, crayfish, and crabs numbered among the available seafood. A fish sauce known as garum was also a popular flavoring agent.

The wealthiest Romans used the vast reaches of the empire to impress their guests with exotic or rare meats such as peacock, ostrich, and sow's udders. In the case of the last delicacy, such indulgence was even forbidden under sumptuary laws. Sumptuary laws regulate consumption to ensure social hierarchies or moral norms—meat dishes in Ancient Rome could be extravagant displays of wealth and class. Dormice were another delicacy outlawed by these laws—a fact probably surprising to many today.

Both soft and hard cheeses were Roman dietary staples. More shelf-stable and transportable than milk, cheese prices were at times fixed by the emperor to ensure affordability. Goat and sheep's milk cheeses were made with rennet, while in northern provinces cow's milk was also used. Many of the ancient cheese recipes can still be reproduced today. 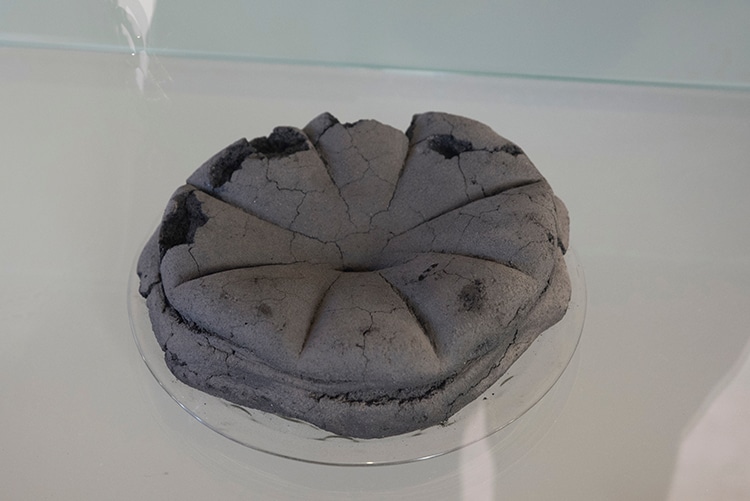 Bread found at Pompeii, preserved by the layer of volcanic ash. (Photo: Stock Photos from LESZCZEM/Shutterstock)

Experts have suggested that cereals and legumes composed 70 percent or more of the average Roman diet. Varieties of grains (many grown in the far reaches of the empire) included wheat, barley, millet, and oats. From these grains, the Romans made porridge—known as puls—which was frequently eaten among the empire's common people. Cakes and pancakes could be also be made from cereals and served with cheese or fruit.

Bread was an important use of cereal crops. Urban people purchased large quantities of bread from professional bakers. Darker, coarser loaves of barley or emmer wheat were more affordable. Those with larger budgets could purchase finer, white flour loaves. The wealthier citizens could also purchase breads enriched with milk, eggs, or butter. Fascinatingly, a round loaf of Roman bread was preserved by the volcanic ash which destroyed the city of Pompeii in 79 CE. This ephemeral, everyday food has been preserved for 2,000 years. 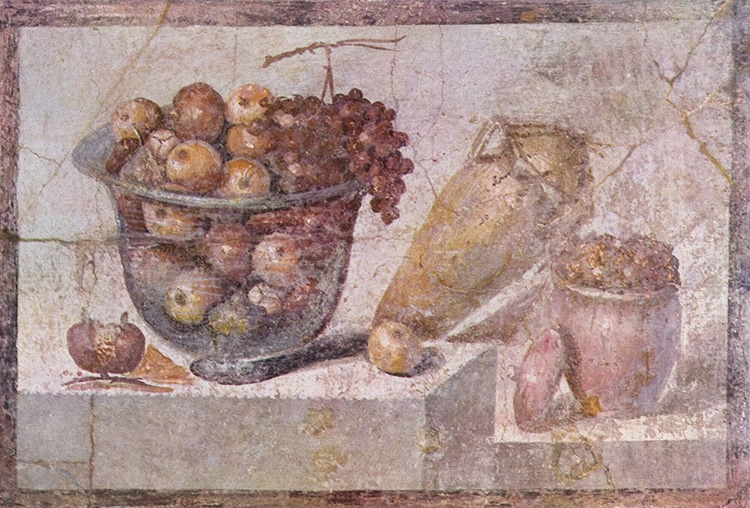 A fresco of fruit in the House of Julia Felix at Pompeii. (Photo: Wikimedia Commons [Public domain])

Ancient Romans ate a lot of fresh and dried fruits. Berries, apples, pears, lemons, quinces, grapes, and pomegranates were all enjoyed. Peaches imported from modern-day Iran, cherries from what is now Turkey, and plums from Syria all enriched a repertoire of local produce. Figs from the region of Anatolia were also popular. These fruits could be paired with honey, cream, or cheese. Perhaps the most critical fruits were olives, which were eaten whole or pressed for olive oil.

What did the Romans drink? 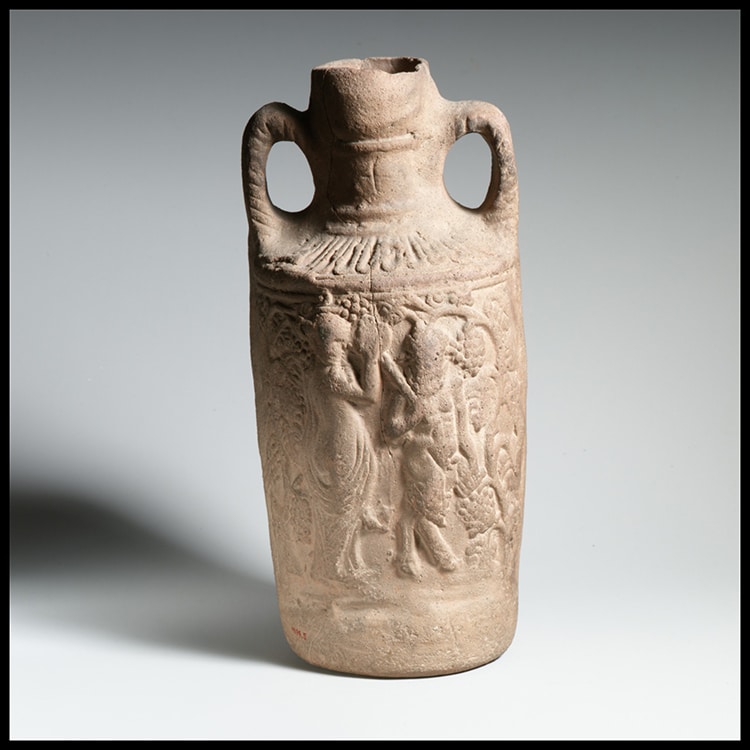 A Roman terracotta amphora (jug) from Cnidus, in modern day Turkey. Crafted in the 2nd or 3rd century CE, the raised details show the god Dionysus with grapes. (Photo: The Metropolitan Museum of Art [Public domain])

The Romans are not known for drinking water, although of course they did do so. A common drink known as posca mixed water with vinegar from wine gone bad. Primarily associated with Roman soldiers, posca was thought to be cleaner and healthier than water. Some modern recipes are available on the website Pass the Garum, should you wish to try this ancient vinegar drink.

The Romans traditionally looked down on beer as the drink of barbarians. However, traditions of beer brewing existed in the provinces of the empire. Beer had long been brewed in Egypt before the Roman occupation and traditions seem to have also existed in pre-Roman Britain. Wine was the Roman drink of choice, but Roman officials stationed in far-flung lands might find themselves at the mercy of local brews. 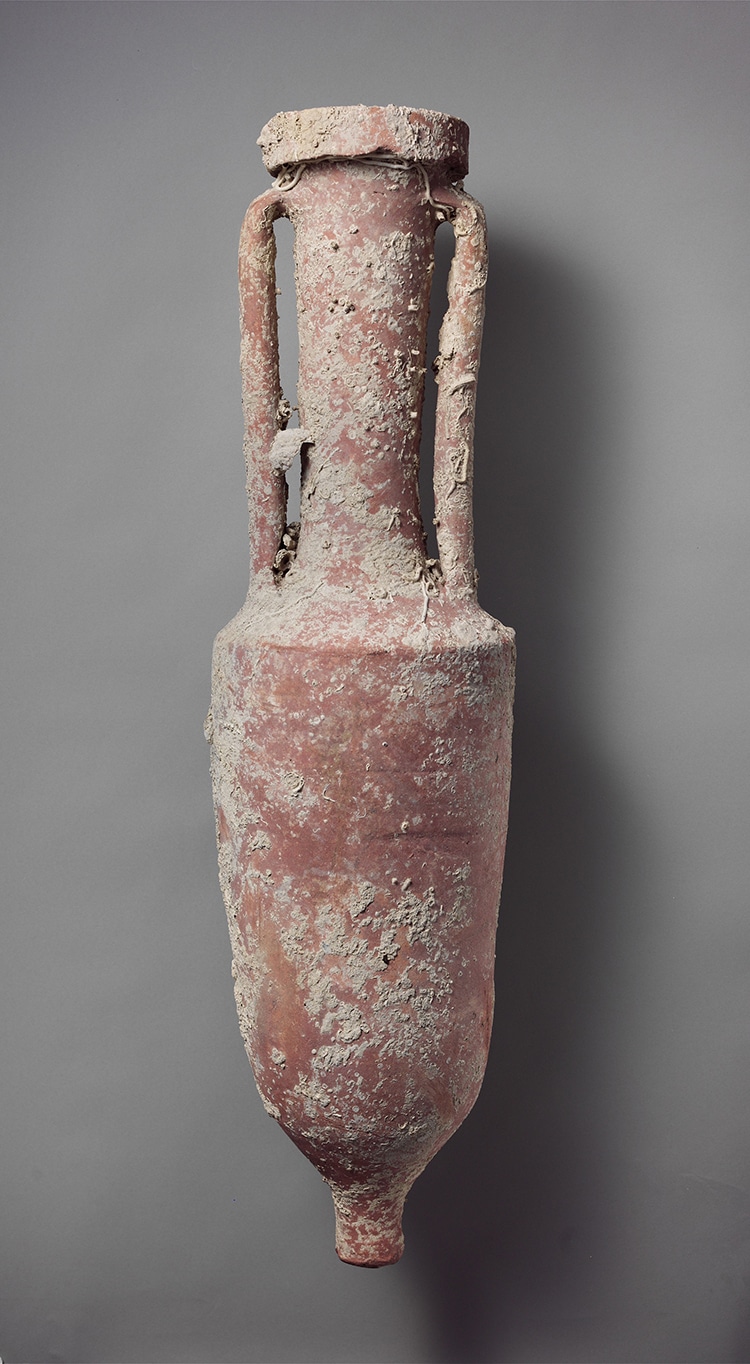 A Roman terracotta wine amphora from 100 BCE. This example comes from a Roman sunken ship which was carrying wine to Gaul. (Photo: The Metropolitan Museum of Art [Public domain])

The Ancient Romans are well known for their love of wine; most people partook, even the lower classes. Vineyards cultivated grapes, which were then crushed and fermented in earthen jugs lined with wax. Stored and transported in amphorae, these earthen jugs with handles could carry large amounts of wine depending on the size of the vessel. An amphora might be decorated with designs or reliefs, some of which feature the god of wine Dionysus, also known as Bacchus. Connoisseurs knew the reputations and variations of wine from different regions—much as wine enthusiasts prefer certain varietals today. The writings of Virgil, Pliny, and Columella address the great variety of wines throughout the empire.

Wine could be drunk out of handled cups known as scyphus. Unlike today, the ancient Romans usually drank diluted or flavored wine. Roman wine was stronger in taste and alcohol content than wine today, so cutting the alcohol with water was common practice. Although sweet white wines were especially popular, any wine could be flavored with a variety of ingredients. These potential flavors included wormwood, myrtle-berries, figs, roses, asparagus, parsley, radishes, laurels, junipers, cassia, cinnamon, and saffron. For more information on such “artificial wines” for pleasure or medicine, one can read the helpful accounts of Pliny the Elder.

The Good, the Bad, and the Mad: 7 Fascinating Emperors of Ancient Rome

Want to advertise with us? Visit My Modern Met Media.

Become a My Modern Met Member
As a member, you'll join us in our effort to support the arts.
Become a Member
Explore member benefits

How a Volcanic Eruption Preserved the Ancient Roman City of Pompeii

Meet the Harvard Computers, the Undervalued Women Who Mapped 400,000 Stars

More on My Modern Met

Learn How the Affordable Kodak Brownie Camera Made Photography Accessible

Get to Know Montmartre, Paris’ Legendary Artist Neighborhood on a Hill

A “Wee” History of the Leprechaun, a Legendary Character From Irish Folklore

Who Was Marie Curie? Learn More About This Pioneering Nobel Prize Winner 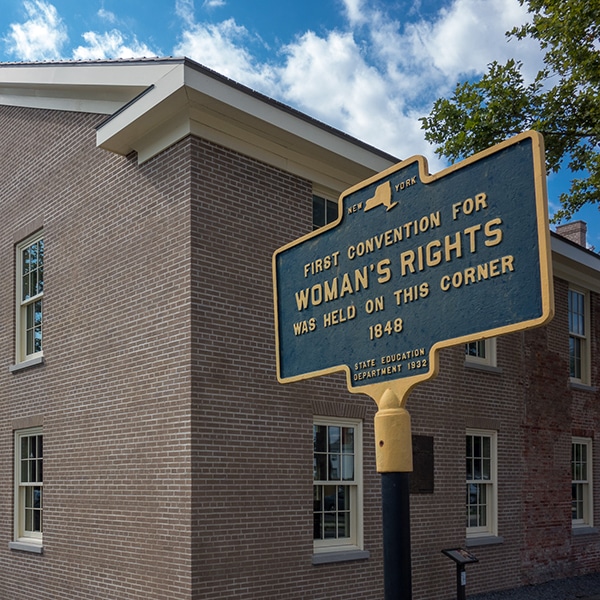 What Happened at Seneca Falls? Learn About the Gathering of Great Minds for Women’s Rights 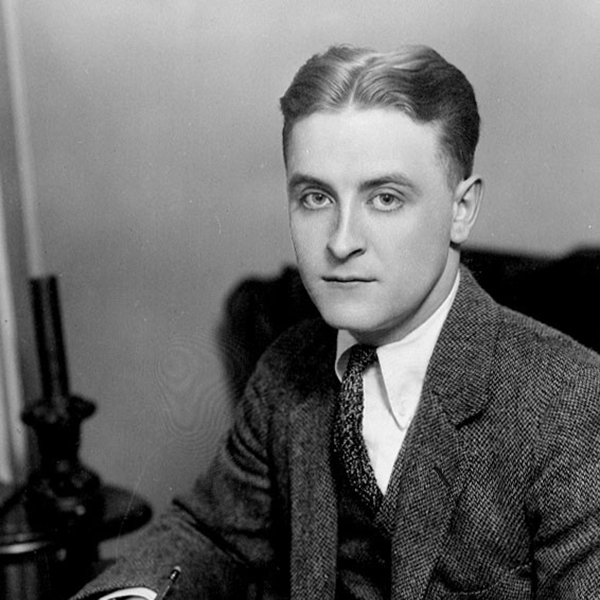 Get To Know F. Scott Fitzgerald, the Legendary Author Responsible for ‘The Great Gatsby’

Celebrating creativity and promoting a positive culture by spotlighting the best sides of humanity—from the lighthearted and fun to the thought-provoking and enlightening.