You have reached the cached page for https://www.football365.com/news/champions-league-winners-losers-diego-simeone-jurgen-klopp-liverpool
Below is a snapshot of the Web page as it appeared on 9/11/2021 (the last time our crawler visited it). This is the version of the page that was used for ranking your search results. The page may have changed since we last cached it. To see what might have changed (without the highlights), go to the current page.
You searched for: +What did Gasperini say about Remo Freuler? We have highlighted matching words that appear in the page below.
Bing is not responsible for the content of this page.
Liverpool, Simeone, PSG feature in Champions League winners and losers
Newsletter 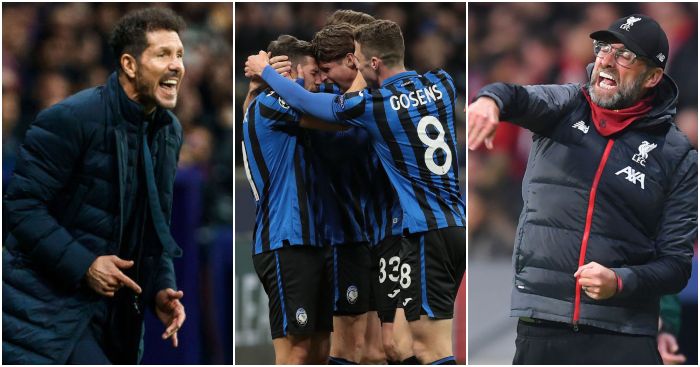 Liverpool reared their ugly heads. But at least they showed emotion, which is more than can be said for PSG.

Atalanta
What a story. Atalanta were relegated from Serie A as recently as 2010 and because the Atleti Azzurri d’Italia is currently being renovated, they can’t even play these games in their own stadium.

Valencia’s late consolation at San Siro will make the second leg slightly trickier but, most likely, Atalanta will reach the Champions League quarter-finals at the first attempt on the back of a budget which is roughly the size of Burnley’s.

And they’re doing this with a group of players who are hardly household names. Josip Ilicic has played at a high level for a long time and Alejandro Gomez deserves his reputation, but – more broadly – their progress has been underpinned by footballers who never would have seen the inside of the Champions League had they not kicked their way through the doors.

Remo Freuler, Hans Hateboer, Pierluigi Gollini, Marten de Roon; these are landfill players in name, but somehow part of the continental elite in reality. In Gian Piero Gasperini, Atalanta also have a coach who looks like he’s straight from a Football Italia casting session, but who has nevertheless had a very middling career until now.

Prior to being appointed by Atalanta, Gasperini’s reputation was really just a set of curious anecdotes: he was the coach who Palermo sacked twice in six weeks and who managed to last just five games at Inter. This is less a season in the sun, more the plotline of a film.

Diego Simeone’s brand
There’s still something there. In the prelude to this game there were some excellent articles written about Simeone – the best was probably this, by The New York Times’ Rory Smith – and most of them pivoted on the premise that Atletico’s rise had inadvertently compromised their power.

Essentially, that while the club’s debt had gone, the club’s transfer record had risen ten-fold and the relic-like Estadio Calderon had been replaced by the gleaming Metropolitano, that rise in status had cost something deeper and perhaps even immunised against the potency of Simeone’s message.

It’s probably true, but certainly not on Tuesday night. That was a very pure Atletico performance. It was full of bastardry, melodrama and noise, but also a lot of excellent football. What shouldn’t be lost in acknowledging the sensory nature of that win, either, is that Simeone and his players overcame a significant technical deficit to achieve it. Liverpool are far superior in nearly every position. They’re deservedly European champions and soon to be runaway winners of the Premier League.

Yet they were outplayed in a way that they haven’t been for a very long time.

Remember also what Atletico have lost over the last twelve months; it’s a staggering amount of ability. Antoine Griezmann, obviously, but also Rodri, Lucas Hernandez, and three members of that iconic defence: Juanfran, Diego Godin and Filipe Luis. Even if those last three were beyond their primes, their departure would have been to the significant detriment of the club’s culture. When players like that leave, the challenge doesn’t end with filling their places in the starting line-up.

Credit to Simeone, then. He probably is within a downward cycle, but this was a fine tribute to those earlier days. Atletico probably needed another goal on Tuesday, because Liverpool have been badly riled and will surely steam into them at Anfield, but what a night this would have been to be part of.

RB Leipzig
They were exactly as advertised, producing an excellent away performance which should have yielded a far bigger lead.

We knew about Leipzig’s individuals – several of them are rumoured to be heading for English clubs – but this was an example of how well coached they are. The focus for now is rightly on Tottenham’s failings, but there was still plenty to admire about the way their opponents stretched the pitch and used the ball to prod at their weaknesses.

This was a very good night for Julian Nagelsmann. The headline is that Spurs were without a recognised forward and that’s a valid asterisk to apply, but they were also made to look absolutely hopeless in defence and incredibly naïve without the ball. Even against a back-four – really six – who sat so deep, Leipzig still created overloads and angles and shooting opportunities nearly every time they went forward. And when they lost possession, they were relentless in pursuing it, so much so that the only tactic they faced for the first hour were long, straight clearances in response. Tottenham were that afraid of playing through midfield.

This could have been three or four-nil, but for Leipzig’s profligacy and an excellent performance from Hugo Lloris. Even though it wasn’t, it was still hugely impressive and, don’t forget, still a clean sheet away from home without any recognised centre-backs on the pitch.

Borussia Dortmund
A missed opportunity, really, because Dortmund were so superior and played so well that they should really be taking more than a one-goal lead to Paris. And the away goal they let in was a disaster. No, Dan-Axel Zagadou, that’s not how you tackle. That’s never how you tackle.

But despite its imperfections, theirs was a performance of real verve. Given the age profile of that team and the array of young attacking players at its tip, it can sometimes seem like a side which just runs on enthusiasm: hard running and expression, again and again.

And it does to an extent, but there were some excellent midfield performances, too. Axel Witsel was fantastic, Emre Can equally good, and a feature of the night was just how easily Dortmund went forward. The little touches between the lines, the triangles that sprang up through the middle of the pitch. It was most entertaining in its dynamic moments, when Jadon Sancho and Erling Haaland were running into space, but the work before that – which created those opportunities – was also of the highest order.

Mats Hummels was also terrific in the centre of defence. Every team with an ambition of winning Euro 2020 should be grateful that he won’t be there. Except Germany, of course.

Tottenham
They’re covered in more detail here, but that wasn’t good. Parts of it were acceptable and much of what Jose Mourinho said post-game was very fair. In fact, the pundits’ faux-incredulity at his remarks was slightly odd and Des Kelly probably got a little bit carried away with his line of questioning.

Even so, if this was a good effort, it really wasn’t a good performance.

Paris Saint-Germain
They just leave you so cold. Warm with mirth, obviously, because these annual failures are like an extra Christmas in February or March, but there’s so rarely any emotional response to watching PSG play.

It just doesn’t look like it matters very much. Given that their entire season is defined by the Champions League, it’s strange that their players seem to tiptoe through these games. They have some very significant structural issues too – where was the midfield for Haaland’s second goal? – but these performances seem inwardly instructed by the knowledge that, come the weekend, they’ll have the chance put five goals past Sochaux, Le Havre or someone similar

Maybe that’s what they prefer. PSG talk about winning the Champions League and, yes, they’d probably like to do that. But, season on season, there’s nothing in their performances which suggest that it’s more than a vague desire.

Jurgen Klopp
What a strange post-game interview. Klopp may have legitimate grievances with the nature of Tuesday night’s defeat in Madrid – the referee wasn’t good at all – but this wasn’t a particularly bad result for Liverpool and they’re still favourites to progress.

But Klopp was rattled. Not just by the poor decisions, but by the crowd, by Diego Simeone and by Atletico’s gamesmanship.

Fair enough. But what did he expect? Simeone’s side aren’t what they were – see above – and to win this game they were always going to have to play every trick available to them. Liverpool just didn’t respond particularly well to that and, unfortunately, that reflected either a complacency, a failure to properly prepare, or a little of both.

The sour note struck in the aftermath didn’t properly reflect that Liverpool had lost because – ultimately – they didn’t play particularly well.

In fact, they could already be out of this tie. If Atletico had had a more dependable forward than Alvaro Morata then, feasibly, Liverpool could have conceded three times at least. That isn’t to say that their opponents didn’t dive, time-waste or search for every artificial advantage going, but that isn’t why they scored and it isn’t why they won the game.

Klopp has this side to him. When his team are winning and everything’s going well, he’s Big Uncle Jurgen, the SuperCrazyHappyFun character from the many, many articles which are written every week. But when anything goes against him, his behaviour deteriorates quite rapidly.

It’s always slightly disappointing to see that in him, too. There’s no suggestion that he should be held to a higher standard – of course he shouldn’t – but there’s nothing uglier than watching him towering over an official, screaming in his face. Maybe it’s because there’s so much to like about him? Who knows, but this wasn’t one of his better nights.

Andrew Robertson
Ditto. Who doesn’t like Robertson – excellent player, lovely story, seems like a thoroughly decent person away from pitch.

But let’s not play dumb. In among his many brilliant performances and his tremendous evolution as a full-back, have been the elbows, the naughty tackles, the sly digs at opponents and the general mischief in his game. All of which is fine (to an extent), because it’s part of his playing identity, but that doesn’t entitle him to any moral high ground when another team manages to get under his skin.

His surly interview was misplaced and sour. It was a shame, because he was one of Liverpool’s better players in Madrid.

It’s easy to understand how this happens, though. Liverpool have been on a brilliant run and have forgotten what losing feels like. When a defeat arrives under those conditions, it’s alien and the manager and players don’t really know how to respond to it. Nor do some of the supporters, on the basis of this morning’s Mailbox.

Remember Arsenal at Old Trafford all those years ago? What a mighty tantrum that was. How about Alex Ferguson’s Man United any time they lost a game? Or Pep Guardiola whenever a journalist doesn’t fall at his feet quickly enough?

So, it happens. It’s ugly, though, and in this instance, with the tie not even over, it wasn’t necessary. Save it for the second leg, Liverpool.

You like Winners and Losers, don’t you? Well here it is in bloody video form on the new Football365 Show, featuring Sarah saying ‘cock’. Inject it into your veins.

Your browser is out-of-date!

Update your browser to view this website correctly.Update my browser now