You have reached the cached page for https://www.britannica.com/biography/Vytautas-the-Great
Below is a snapshot of the Web page as it appeared on 5/31/2020 (the last time our crawler visited it). This is the version of the page that was used for ranking your search results. The page may have changed since we last cached it. To see what might have changed (without the highlights), go to the current page.
You searched for: +Vytautas We have highlighted matching words that appear in the page below.
Bing is not responsible for the content of this page.
Vytautas the Great | Lithuanian leader | Britannica
Vytautas the Great
Lithuanian leader
Media
Print
Thank you for your feedback

Vytautas was the son of Kęstutis, who for years had waged a struggle with his brother Algirdas for control of Lithuania. The conflict between the two branches of the family continued into the next generation, as Vytautas vied with Algirdas’ son Jogaila. Both Vytautas and his father were captured by Jogaila in 1382 and Kęstutis was murdered while a prisoner. Vytautas, however, escaped and two years later was able to make peace with Jogaila, who returned to Vytautas the family lands seized earlier. In an effort to consolidate his position and widen his power, Jogaila married the 12-year-old Polish queen Jadwiga and was crowned king of Poland in Kraków on Feb. 15, 1386, as Władysław II Jagiełło.

Vytautas then waged an intermittent struggle for power with Jogaila and on occasion sought further assistance from the Teutonic Order. Vytautas’ popularity grew until his cousin was forced to adopt a conciliatory position. Jogaila offered to make Vytautas his vice regent over all of Lithuania. The offer was accepted, and in August 1392 a formal compact was signed. As time was to show, Vytautas by this act became supreme ruler of Lithuania in fact if not in law.

In this same period, union between Poland and Lithuania was proclaimed in a treaty concluded at Vilnius in January 1401. Under the terms of the treaty, the Lithuanian boyars promised that in the event of Vytautas’ death they would recognize Jogaila as grand prince of Lithuania, and the Polish nobility agreed that if Jogaila died they would not elect a new king without consulting Vytautas.

Vytautas and Jogaila then turned their attention westward, and there followed a series of wars with the Teutonic Order, which recognized Švitrigaila (Swidrygiełło), a brother of Jogaila, as grand prince of Lithuania. Vytautas was able to drive Svidrigaila out of the country, but the Teutonic Order was able to retain control of a portion of Lithuania. Early in 1409 Vytautas concluded a treaty with Jogaila for a combined attack on the Order, and on June 24, 1410, the Polish-Lithuanian forces crossed the Prussian frontier. In the Battle of Grunwald (Tannenberg) on July 15, 1410, the Teutonic Knights suffered a blow from which they never recovered. German supremacy in the Baltic area was broken and Poland-Lithuania began to be regarded in the West as a great power.

In 1429 Vytautas revived his claim to the Lithuanian crown, and Jogaila reluctantly consented to his cousin’s coronation as king, but before the ceremony could take place Vytautas died.

This article was most recently revised and updated by Amy Tikkanen, Corrections Manager. 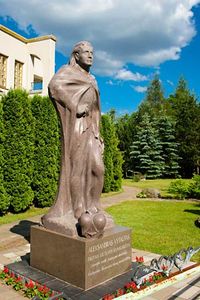