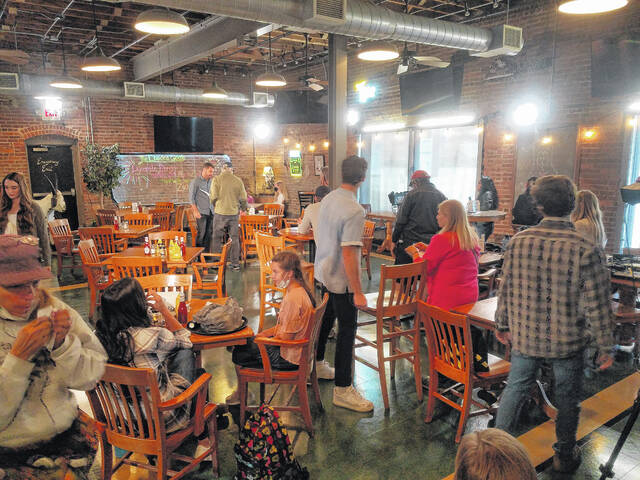 A scene from The Loaded Goat, when Mayberry Man was being filmed in Mount Airy in September 2020. (John Peters | Mount Airy News) 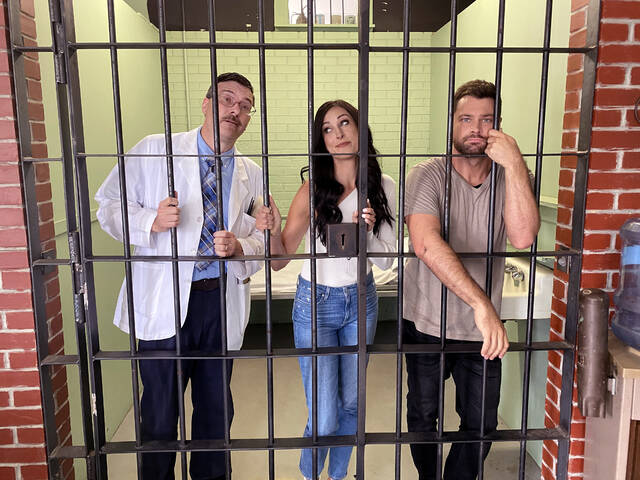 Floyd the Barber Tribute Artist Allan Newsome (from left) and actors Ashley Elain and Brett Varvel from a scene on the set of Mayberry Man. Their stories are set to continue in Mayberry Man: The Series. (Jan Newsome photo)

For anyone who believes “The Andy Griffith Show’s” hold on the public may be loosening, brothers Cort and Stark Howell have a message — not so fast.

The two, sons of actor Hoke Howell (a character actor known for portraying hillbilly Dud Wash on The Andy Griffith Show), released the independent film Mayberry Man last year. While the film has had a limited release — 30 theaters spread across a dozen states altogether, according to Cort Howell, many of those showings have been sell-outs. But what really tipped the scales for the movie was getting a deal to distribute through Amazon streaming services.

“It has performed extremely well on Amazon Prime for a small indie film — huge success for a small film like ours.”

That has led the duo, along with much of the movie’s cast, to take the next step and create Mayberry Man: The Series.

“In the feature film, arrogant movie star Chris Stone’s life changes when he is forced to spend a week at a nostalgic festival celebrating ‘The Andy Griffith Show,’ the beloved television classic from the 1960s,” Cort said in a press release. “Mayberry Man: The Series picks up where the movie leaves off, following Chris Stone as he navigates his newfound relationships with Mayberry’s sweetheart Kate and the quirky characters of a modern-day Mayberry.”

The movie’s plot had its beginning in a real-life visit Stark Howell made to Mayberry Days several years ago.

“I’ve always been a fan of the show, but I was shocked to discover the spirit of Mayberry still exists today within the tight-knit Mayberry fan community,” he said. That visit started the creative wheels turning in his mind, and he and his brother, along with several other children of Mayberry stars, put the film idea together.

“It’s the perfect setting to tell modern-day, family-friendly stories that express the virtues of the fictitious town of Mayberry that we all love.”

He said during that developmental stage, he and his brother decided to produce the movie as an independent project, which he said would allow them to make a family-friendly movie without the influence of sometimes less family-friendly studios.

Stark’s younger brother Cort Howell produced the movie and will return as producer of the series. “We worked outside the Hollywood system and partnered with Mayberry fans through crowdfunding to protect the wholesomeness of the project,” Cort said. “We plan to repeat this winning formula with the series.”

Much of the funding for the project was raised through crowdfunding efforts, after a kick-off party at the Loaded Goat in Mount Airy, with many of the larger donors earning time on screen during the movie. They intend to use the same strategy for the series. While he and his brother have secured private backing for some of the cost of the venture, he said the crowdfunding component will be vital to getting the series off the ground.

“For fans who always dreamed of visiting Mayberry, they have the opportunity to participate in the show as actors and extras,” he said. When backing the project on Indiegogo beginning June 25, fans can choose from a variety of perks that include things such as getting their name in the credits, passes to a red-carpet premiere, participating on-set as a background extra, or they can even land an on-screen speaking role.

The project involves what Stark Howell calls “Mayberry royalty,” the kids of many of those actors who were in the show during its 1960-1968 run. Andy Griffith’s daughter Dixie Griffith is returning as executive producer and Karen Knotts, daughter of Don Knotts, will be a cast member. Additionally, co-producer Gregory Schell is the son of actor-comedian Ronnie Schell who appeared on “The Andy Griffith Show” and played Duke Slater in “Gomer Pyle, USMC.” Ronnie Schell is also slated to appear in the series.

Other scenes from the movie were shot in and near Danville, Indiana, home of a smaller festival called Mayberry in the Midwest, as well as scenes shot in California.

Cort Howell said the eventual distribution of the series had not yet been determined, and most likely won’t be until 2023.

The crowdfunding campaign launches June 25 and runs through the end of July. Special events are planned throughout the campaign and can be found at mayberryman.com.

Recipe of the Day