“This is the second time in our history that there has come back from Germany to Downing Street peace with honour. I believe it is peace for our time.” 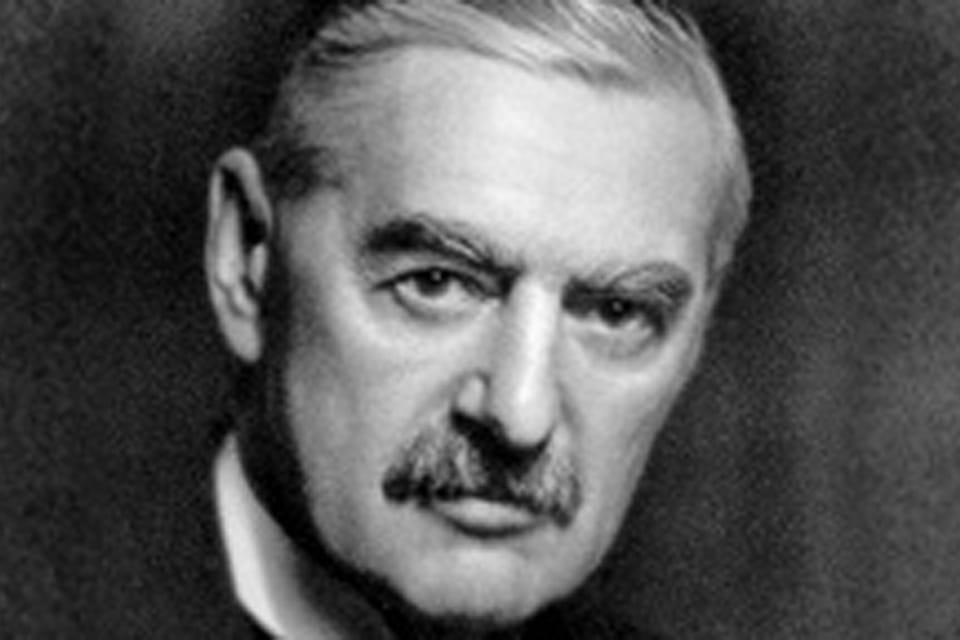 Neville Chamberlain was born to a political family, being the youngest son of Joseph Chamberlain, a Victorian Cabinet minister, and the half-brother of Austen, a Chancellor of the Exchequer. He was educated at Rugby and Mason College, Birmingham.

When he was 21 Chamberlain left for the Bahamas to manage a 20,000 acre estate. The venture eventually failed, but he gained a reputation for being a hands-on manager, taking a strong interest in the day-to-day running of affairs. On his return he became a leading manufacturer in Birmingham, where he was elected a councillor in 1911 and Lord Mayor in 1915. Then, in 1916, David Lloyd George appointed him Director General of the Department of National Service, but personal bitterness between them led to his resignation within a year.

In 1918 Chamberlain was elected Conservative MP for Ladywood, but refused to serve under Lloyd George in coalition government. In 1922 he became Postmaster General under Andrew Bonar Law, where he proved his judgement and ability. He was made Minister of Health within months and, under Baldwin, Chancellor of the Exchequer all in little more than a year, and within 5 years of entering Parliament.

His Local Government Act of 1929 reformed the Poor Law, effectively laying the foundations of the welfare state, and reorganised local government finance.

In 1931 Ramsay MacDonald made him Chancellor in his national government, and Stanley Baldwin retained him in turn. During the economic crisis, he achieved his father’s protectionist ambitions by passing the Import Duties Bill in 1932.

In May 1937 he succeeded Baldwin as Prime Minister, and was elected Conservative leader.

War was brewing in Europe and had already exploded in Spain. Chamberlain was unwilling to go down in history as responsible for an inevitably destructive war, without doing everything possible to prevent it. Chamberlain, as with many in Europe who had witnessed the horrors of the First World War and its aftermath, was dedicated to restoring peace at almost any price.

He met German chancellor Adolf Hitler in Munich 1938, the result of which was an agreement that Britain and Germany would never again go to war. He declared on his return to the UK “I believe it is peace for our time”. However, the success of ‘appeasement’ was short-lived, as Hitler occupied Prague the following year.

The invasion of Poland forced Chamberlain’s hand, and he declared war on 3 September, 1939. He soon came under attack from all political sides after the disastrous first months of war, when Germany looked set for a rapid victory. Unable to form a national government himself, he resigned in May 1940 after the failure of the British efforts to liberate Norway.

Bowel cancer struck soon after his resignation, forcing him to leave Winston Churchill’s coalition government. On his death bed he gathered the strength to whisper “approaching dissolution brings relief”.