You have reached the cached page for https://torontomovieguy.blogspot.com/2021/04/they-all-laughed-peter-bogdanovich-1981.html
Below is a snapshot of the Web page as it appeared on 5/20/2021 (the last time our crawler visited it). This is the version of the page that was used for ranking your search results. The page may have changed since we last cached it. To see what might have changed (without the highlights), go to the current page.
You searched for: +They All Laughed movie We have highlighted matching words that appear in the page below.
Bing is not responsible for the content of this page.
Toronto Movie Guy: They All Laughed (Peter Bogdanovich, 1981)
skip to main | skip to sidebar

They All Laughed (Peter Bogdanovich, 1981) 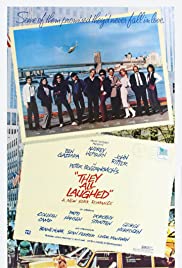 Peter Bogdanovich’s They All Laughed makes for strange viewing, often feeling as if taking place on the sidelines of a more substantive movie that’s screening somewhere else – an inordinate amount of the viewing time consists of people getting in and out of cabs or buildings, or following other people on the street, or signaling to others who they should follow, with the human stories at the centre of all this busy intrigue ultimately revealed as being so slight that they hardly register at all. Aspects of Bogdanovich’s vision are rather sweet – his people make immediate connections, whether as friends or more than that, spontaneously applying nicknames and developing lines of patter with others they just met; the flip side though is a feeling of utter arbitrariness and disposability, in which it’s hard to take any expression of real feeling or emotion seriously, or to know whether that’s even intended. The notional plot has Ben Gazzara, John Ritter (whose relentless tripping and bumping and general klutziness is the main source of physical comedy) and Blaine Novak as three detective agency employees working on two surveillance cases on behalf of suspicious husbands; Audrey Hepburn and Dorothy Stratten are the targets. Stratten is merely blank, regardless of what tragic resonance her presence might in theory have carried, and Hepburn is strangely and frustratingly underused, barely conceived as a character, and seemingly held by Bogdanovich at arm’s length. The film isn’t without a certain panache, but it barely contains, much less evokes, even isolated and scattered laughter, let alone the sustained collective enthusiasm of the title. Talking of which, the fact that the title song is among several Frank Sinatra songs heard just fleetingly in the background (seemingly in evocation of bygone classiness), in contrast to the foregrounded prominence of some grindingly undistinguished country numbers, is just another peculiarity.

Posted by torontomovieguy at 10:20 PM

Click here for the archive of my movie tweets (torontomovieguy)

Click here for my vacation diary and other occasional notes

torontomovieguy
From 1997 to 2014 I wrote a weekly movie column for Toronto's Outreach Connection newspaper. The paper has now been discontinued and I've stopped writing new articles, but I continue to post my old ones here over time. I also aim to post a daily movie review on Twitter (torontomovieguy) and I occasionally tweet on other matters (philosopherjack).