You have reached the cached page for https://www.amazon.com/House-Arrow-Oskar-Homalka/dp/B004J61IOS
Below is a snapshot of the Web page as it appeared on 6/4/2021 (the last time our crawler visited it). This is the version of the page that was used for ranking your search results. The page may have changed since we last cached it. To see what might have changed (without the highlights), go to the current page.
You searched for: +The House of the Arrow We have highlighted matching words that appear in the page below.
Bing is not responsible for the content of this page.
Watch House of the Arrow | Prime Video 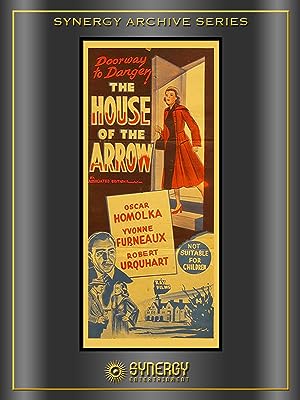 House of the Arrow

(62)6.51 h 12 min200613+
A rich old lady dies in bed and leaves all of her money to her recently adopted daughter, who is quickly accused and exonerated of her murder. But that most British of questions remains. Who dunnit? (1953; B&W)

Rentals include 30 days to start watching this video and 48 hours to finish once started.
Add to
Watchlist
Redeem a gift card or promotion code
By ordering or viewing, you agree to our Terms. Sold by Amazon.com Services LLC.
Write review

George GoldbergReviewed in the United States on August 26, 2019
2.0 out of 5 starsNot the way the law works
Verified purchase
Well acted, but with a fundamental flaw which pervades the film. An English lawyer goes to France to represent an English woman living there who is accused of murder. Now, an English lawyer, not admitted to practice in France and admittedly ignorant of French law, would, indeed must engage French counsel to work with him. This is not just a formal rule, or a matter of comity between friendly nations, it is essential for mounting an effective defense. This English lawyer does not do so. Instead, he works with the French police officer who is seeking evidence with which to arrest his client and send her to the guillotine, even showing him her correspondence with his firm which, of course, is privileged. This is manifestly unethical and in this country, and I strongly suspect in England too, would be grounds for censure and even disbarment. It is also strange that the French dialogue, and there is quite a bit of it, is not translated. My French was good enough for most of it, but surely there should at least be a warning that if you have no French, you will miss much of what is going on.

I am a retired American trial lawyer and, incidentally, a former member of the Union Internationale des Avocats headquartered in Brussels.

LittleSaraReviewed in the United States on April 12, 2020
4.0 out of 5 starsNot a bad film for its time
Verified purchase
This is a surprisingly good cozy who-dun-it for its time (1953). The print is rather dark and grainy but not unwatchable. There is quite a bit of French dialog, but I don't think most people will miss any crucial clues if the cannot understand French. I usually find British films of this era to be rather disjointed and oddly edited, but that wasn't the case here. The plot is reasonably clever, the detective is an interesting and sometimes amusing character, and I think all the important threads are tied up. I have definitely seen worse.
3 people found this helpful
Report abuse

JUJYReviewed in the United States on January 10, 2019
5.0 out of 5 starsTop 10 Noir Films
Verified purchase
Love this film....watch 3 times a year and often put on when cleaning the house lol....It moves me in a way I can't put my finger on. Wish the quality was better....I want to live in this FILM...but must be the benefactor of the rich aunt of course :)
And I'd need to own the big mansion across the way....and play film noir all day.
2 people found this helpful
Report abuse

P. B. SharpReviewed in the United States on April 28, 2014
3.0 out of 5 starsAtmospheric!
Verified purchase
Oskar Homolka makes a great sleuth. A rather short in height man, he nevertheless dominates the scenes he is in with his gestures, his expressions, including an engaging grin.. He is rather like a bulldog and he is someone you definitely would not be wise to pick a fight with but he is all smiles as he bustles round gathering evidence of the murder of an old lady. Black and white is the hallmark of noir films and the use of contrasts of light and dark and shadows creates the perfect atmosphere in which to envelop a murder mystery.
11 people found this helpful
Report abuse

HeatherReviewed in the United States on December 22, 2015
5.0 out of 5 starsWatch this Gem!
Verified purchase
Loved this movie. It's an old copy so beware of that. But I didn't care!! :)

It challenged my very rudimentary French a bit since it had no subtitles when it switched from English to French, but it was still great.

I also liked the humor that the French detective brought into it.

Overall you should watch this!
6 people found this helpful
Report abuse

Gabby WeissReviewed in the United States on May 25, 2018
4.0 out of 5 starsAn Interesting Take in the Detective Genre
Verified purchase
Loved Homolka's police detective; this could have been the beginning of a series - could have competed with many of the Christie characters. I wonder why a sequel was never done? Reminds me of Charlie Chan and Mr. Moto. Homolka was an excellent actor; he is definitely the reason for watching this. All in all, not a bad movie, but this version, as has been mentioned, leaves much to be desired as to the sound.
Report abuse

QuintessentiallyYoursReviewed in the United States on July 14, 2015
5.0 out of 5 starsThumbs Up
Verified purchase
Great plot, and unique detective whose wit matches the music, both of which are merry and at odds with the story and film noir tone. This makes the movie especially appealing. I really recommend it. Also great is how it is set in Paris but is a film noir. Just keep in mind it is an old film that has not been refurbished - I love that viewing experience but it can be annoying.
6 people found this helpful
Report abuse

KM HuberReviewed in the United States on June 15, 2016
5.0 out of 5 starsFine Noir
Verified purchase
Great twists in this black-and-white English noir. I am always on the lookout for these. If you enjoy '30s-'40s atmospheric film, you'll enjoy this one. Oscar Homolka is perfect in this one and my reason for the five stars.
2 people found this helpful
Report abuse
See all reviews
Back to top
Get to Know Us
Make Money with Us
Amazon Payment Products
Let Us Help You
EnglishChoose a language for shopping. United StatesChoose a country/region for shopping.
© 1996-2021, Amazon.com, Inc. or its affiliates