Sviatopolk II Iziaslavich (1050 – April 16, 1113) was supreme ruler of the Kievan Rus for 20 years, from 1093 to 1113. He was not a popular prince, and his reign was marked by incessant rivalry with his cousin Vladimir Monomakh. Upon his death the Kievan citizens raised a rebellion against the Jewish merchants and Varangian officials who speculated in grain and salt.

Sviatopolk was the son of Iziaslav Iaroslavich by his wife Gertrude of Poland.[1] Sviatopolk's Christian name was Michael. During his brother Iaropolk's life, Sviatopolk was not regarded as a potential claimant to the Kievan throne. In 1069 he was sent to Polotsk, a city briefly taken by his father from the local ruler Vseslav, and then he spent ten years (1078–88) ruling Novgorod. Upon his brother's death he succeeded him in Turov, which would remain in possession of his descendants until the 17th century. 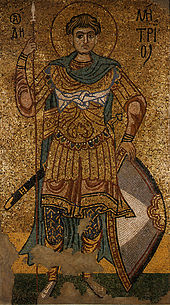 Mosaic of St. Demetrius was installed by Sviatopolk in the Kievan St. Michael's Golden-Domed Monastery to glorify the patron saint of his father.

When Vsevolod Iaroslavich died in 1093, Sviatopolk was acknowledged by other princes as the senior son of Veliki Kniaz and permitted to ascend the Kievan throne. Although he participated in the princely congresses organized by Vladimir Monomakh, he is sometimes charged with encouraging internecine wars among Rurikid princes. For instance, he sided with his cousin David of Volhynia and his son-in-law Bolesław III Wrymouth in capturing and blinding one of Galician princes. He also sided with Vladimir Monomakh in several campaigns against the Kypchaks but was defeated in the Battle of the Stugna River (1093).

Sviatopolk's Christian name was Michael, so he encouraged embellishment of St Michael's Abbey in Kiev, which has been known as the Golden-Roofed up to the present. The history now known as the Primary Chronicle was compiled by the monk Nestor during Sviatopolk's reign.

and in 1094 to a daughter of Tugor Khan of the Kypchaks, Olena

Some sources claim that Sviatopolk used to have an out of wedlock son Mstislav who ruled Novgorod-Sieversky in 1095–1097 and later Volyn (1097–1099). It seems that he later was murdered in Volodymyr-Volynski.[2]

There are little or no information on most of Svitopolk's children except Iaroslav and Zbyslava. Iaroslav and his children largely continued to rule the Principality of Turov, yielding Volyn.

All translations of sviatopolk ii of kiev