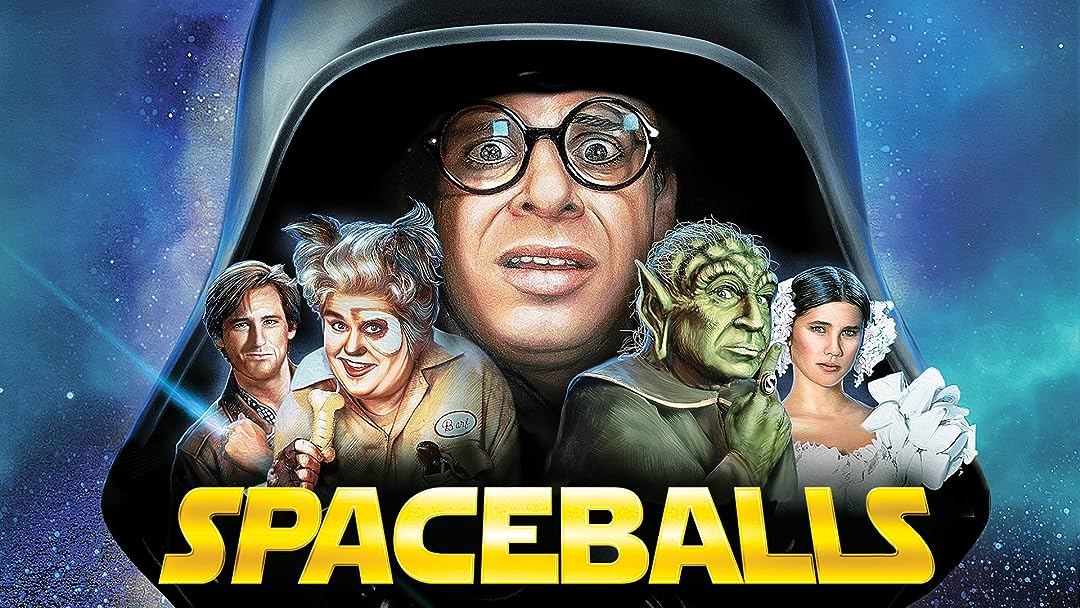 (11,546)
7.11 h 36 min1987X-RayUHDPG
The good-looking rogue Lone Starr calls on his inner hero to save Princess Vespa from the evil clutches of Lord Dark Helmet in a wacky universe that includes the likes of a man-dog, a robot, and a gooey blob named Pizza the Hutt.

Rentals include 30 days to start watching this video and 48 hours to finish once started.

Watch with AMC +
Start your subscription
Add to
Watchlist
By ordering or viewing, you agree to our Terms. Sold by Amazon.com Services LLC.
Write review

The All-Seeing IReviewed in the United States on October 4, 2020
5.0 out of 5 stars
Gut-Busting at Every Turn
Verified purchase
1987’s remarkably absurd "Spaceballs" precedes most Millennials, but its timeless riffing on the original "Star Wars" trilogy ensures this legendary parody a never-ending influx of converts.

Planet Spaceball is commanded by the ham-fisted President Skroob (the incomparable Mel Brooks). Fresh out of fresh air, they're set to pilfer Planet Druida for its stash. Colonel Sandurz (George Wyner) helms the elongated star destroyer tasked with the job, but Skroob has the Colonel's every move checked by wonderfully lame Darth Vader doppelgänger Dark Helmet (Rick Moranis). An elite comedy cast is made extraordinary by late greats John Candy as Barf, Dick Van Patten as King Rolan, and Joan Rivers as Dot Matrix (also appearing is one "Pizza The Hut").

Released a decade after "Star Wars," critics thought "Spaceballs" had dragged its feet on spoofing the sci-fi classic. No one dreamed both would be hoarding new fans to this day. - (Was this of use? If so, let me know by clicking "Helpful." Cheers!) - WATCHED IT? THEN WATCHLIST: [[ASIN:B07JVSYPZ7 "Stadium Anthems,"]] [[ASIN:B001K37CT8 "Airplane!"]]

fitmamiReviewed in the United States on June 12, 2018
5.0 out of 5 stars
Still awesome!
Verified purchase
Still as hilarious as I remember. It'd be so great if Mel Brooks was still making movies because they really don't make them like this anymore. Had my kids watch it this weekend. My daughter was none too happy about that because she thought she wouldn't get any of it (never seen star wars). But then she laughed from beginning to end.
Yea, mama knows a little something about funny movies!
40 people found this helpful

DafReviewed in the United States on July 30, 2019
5.0 out of 5 stars
Dear me, what are those things coming out of her nose? SPACEBALLS?
Verified purchase
Alright, I'll admit: most of the jokes in Spaceballs are extremely, extremely corny (this is the type of movie where they "jam the radar" by launching a massive jar of raspberry jam into a satellite dish). But I swear Mel Brooks and his cast of 80s comedy all-stars manage to sell it regardless! Let me recount some of the things I love about Spaceballs:

1. It was NOT made by Star Wars fans. There are no winking insider references or dripping sentimentality. It doesn't matter if you love Star Wars or hate it or have never seen it. Though thankfully it never gets mean-spirited, Spaceballs' complete irreverence toward its main source material is one of its biggest strengths: can you imagine a diehard devoted geek ever coming up with that running merchandising gag?

2. Somewhat related to this is the cast was chosen due to their comic value rather than how well they fit their archetypes. The C-3PO analogue here is played by Joan Rivers for no reason other than because it's ridiculous and hysterical. Likewise, Rick Moranis and John Candy are obviously nothing like Darth Vader and Chewbacca and the movie is all the more hilarious for it.

3. And somewhat related to both of the prior bits is that Spaceballs actually works as (an extremely silly) stand-alone sci-fi adventure. It tells a coherent story and there's genuine character development, to boot. It even features decent special effects for the time! (No, I am NOT kidding; the spaceship effects outclass 'Star Trek V' and the shot near the end where the Eagle 5 arrives at Castle Druidia looks better than any of the planetary landing shots in 'Aliens')

Anyhow, I can't promise it's everyone's cup of tea but if you can't find SOMETHING amusing about Spaceballs you should probably call a coroner because you are likely dead inside.

If you can read this you don't need glasses.

Clay E.Reviewed in the United States on June 29, 2018
5.0 out of 5 stars
Have your Yogurt ready...
Verified purchase
One of the best parodies of all time. It mostly makes fun of Star Wars, but they also hit on Star Trek, Alien, Planet of the Apes, even Transformers to a certain extent. Pay special attention to the lead-in to the main menu screen. This movie is like Animal House in that you have to see it at least twice to catch the stuff you missed while laughing the first time! Oh yeah- if you look closely, you will definitely see the Millennium Falcon in there somewhere. Hard to believe this is over 30 years old already, but I enjoyed it even more now because there are plenty of jokes in there that I didn't understand when I was a kid. If you haven't ever seen this, you owe it to yourself to do so. NOW!
18 people found this helpful

Clark Reviewed in the United States on May 12, 2021
5.0 out of 5 stars
Great movie but a double sided “mirror disc
Verified purchase
Great movie and still one of my favorites
The downside is that this is a “mirror disc” no distinctive screen print “logo” on front of disc. Side A widescreen side B is full screen.

With that being said I’m happy with my purchase over all but an identification logo that can be seen on the front of the disc would have been nice.
5 people found this helpful

Amazon CustomerReviewed in the United States on July 16, 2020
3.0 out of 5 stars
Don't listen to 5 star reviews; They're just nostalgic. This movie is very meh.
Verified purchase
Well, a comedy should make you laugh and I didn't laugh once.... so there is that.
I smiled a couple times.
I never really felt invested in the story.
The jokes are basically just puns of sorts and references to other movies. I mean, it isn't bad but it just isn't actually funny.
I would say the movie is amusing at best.
Characters aren't well developed at all, which would be fine if the movie was funny... but it isn't.

Overall, if you like puns and slap stick humor with old movie references in nearly every scene... then this movie is 100% for you. I'm not a slap stick comedy lover so take my review with a grain of salt.

To me, 3 stars isn't necessarily worth watching - but at the same time- it isn't a "don't waste your time" sort of movie either. You will probably think it was fine. Not great. Not terrible.
5 people found this helpful

Michael GriswoldReviewed in the United States on March 30, 2019
4.0 out of 5 stars
The Spoof That Started It All
Verified purchase
What can really be said about Spaceballs? It’s a movie that launched an entire sub-genre and embraced the idea of “If you can make a movie, you can spoof it.” Spaceballs manages to make mincemeat of Star Wars and actually stand on its own two feet. I can’t remember when I laughed at a movie this hard. I am not a Star Wars person, but if you know the broad general outline of Star Wars and unless you’ve been living under a rock, you should be able to get something out of Spaceballs, even if it is just temporarily losing your ability to eat at Pizza Hut.
6 people found this helpful

FreyjaReviewed in the United States on August 11, 2020
4.0 out of 5 stars
Excellent Movie
Verified purchase
Now you may be wondering, "Freyja, why the four stars?" Well, that only applies to the Amazon Prime version. Call me a purist, but the fact that the track "Good Enough" by Van Halen in the diner scene was replaced with a different song (that was released in 2006 I might add) is honestly why I knocked a star off. Petty? Maybe, but honestly if we're going to start replacing songs in movies, I feel like that's going to set a bad precedent for our media in general.

ANYWAY - movie is a classic, and still funny after all these years. And I still miss John Candy, he was a treasure.
2 people found this helpful
See all reviews
Back to top
Get to Know Us
Make Money with Us
Amazon Payment Products
Let Us Help You
EnglishChoose a language for shopping. United StatesChoose a country/region for shopping.
© 1996-2022, Amazon.com, Inc. or its affiliates