You have reached the cached page for https://issuu.com/spjst/docs/vestnik_1941.09.03/16
Below is a snapshot of the Web page as it appeared on 5/25/2020 (the last time our crawler visited it). This is the version of the page that was used for ranking your search results. The page may have changed since we last cached it. To see what might have changed (without the highlights), go to the current page.
You searched for: +Sigismund Korybut We have highlighted matching words that appear in the page below.
Bing is not responsible for the content of this page.
Vestnik 1941 09 03 by SPJST - Issuu 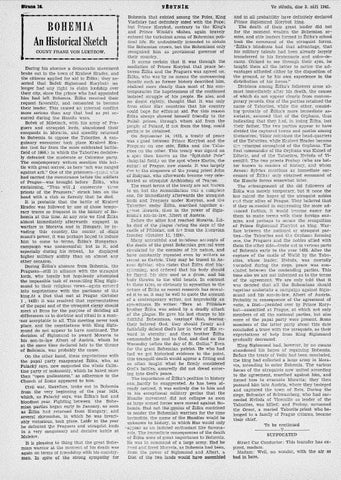 During his absence a democratic movement broke out in the town of Kralove Hradec, and the citizens applied for aid to Ytka; they asserted that Botek Sigismund Korybut) no longer had any right to claim lordship over their city, since the prince who had appointed him had left Bohemia. Zizka received their request favorably, and consented to become their leader. This caused an internal conflict more serious than any that had as yet occurred during the Hussite wars. Bokek of Miletinck, with his army of Pmguers and utraquist lords, abandoned their conquests in Moravia, and speedily returned to Bohemia to oppose the Taborites. A sanguinary encounter took place Kralove Hradec (not far from the more celebrated battlefield of 1866,) in which the Taborites decisively defeated the moderate or Calixtine party. The contemporary writers mention this battle with great sorrow, as here "ark was ranged against ark." One of the prisoners—peleet who had carried the monstrance before the soldiers of Prague—was brought before 2i.tica, who exclaiming, "Thus will ,I consecrate these priests of the Praguers," struck him on the head with a club so fiercely that he died. It is probable that the battle of Kralove Hradec was followed by one of those temporary truces so frequent in the history of Bohemia at this time. At any rate we find Zizka almost immediately afterwards engaged in warfare in Moravia and in Hungary, by • invading this country, the center of -Sigis mund's power, it was perhaps hoped to induce him to come to terms. g' i2ka's Hungarian campaign was unsuccessful; but in it, and especially during his retreat, he displayed higher military ability than on almost any other occasion. During i2ka's absence from Bohemia, the Praguers—still in alliance with the utraquist lords, who loyally but hopelessly attempted the impossible task of reconciling King Sigismund to their religious views—again entered into negotiations with the partisans of the king.At a Diet that met at Prague (October 1 , 1423) it was resolved that representatives of the papal and of the utraquist clergy should meet at Brno for the purpose of deciding all differences as to doctrine and ritual in a manner acceptable to all. This meeting never took place, and the negotiations with King Sigismund do not appear to have continued. The decision of Sigismund to award Moravia to his son-in-law Albert of Austria, whom he at the same time declared heir to the throne of Bohemia, was probably the cause. On the other hand, these negotiations with the papal party exasperated '2 i2ka, who, as PalackY says, now suspected the whole Calixtine party of insincerity, which he hated more than "open godlessness," as adherence to the Church of Rome appeared to him. Civil war, therefore, broke out in Bohemia from the very beginning of the year 1424, which, as PalackY says, was 2i'tka's last and bloodiest year. Fighting between the Bohemian parties began early in January, as soon as Zizka had returned from Hungary; and several skirmishes, in which he was invariably victorious, took place. Later in the year he defeated the Praguers and utraquist lords in a very sanguinary and decisive battle at MaleSov. It is pleasing to thing that the great Bohemian warrior at the moment of his death was again on terms of friendship with his countrymen. In spite of the strong sympathy for

Bohemia that existed among the Poles, King Vladislav had definitely sided with the Pope; but Prince Korybut, contrary to the King's and Prince Witold's Oishes, again bravely entered the turbulent arena of Bohemian political life. He undoubtedly intended to obtain the Bohemian crown, but the Bohemians only recognized him as provisional governor of their country. It seems certain that it was through the mediation of Prince Korybut that peace bee tween Zizka and the Praguers was agreed on. iI•a, who was by no means the unreasoning fanatic such as former history described him, realized more clearly than most of his contemporaries the hopelessness of the continued isolated struggle of his people. He also, and no doubt rightly, thought that it was only from other Slav countries that his country could hope for efficient aid. For this reason i21:a always showed himself friendly to the Polish prince, through whom aid from the people of Poland, if not from the king, could perha;is be obtained. On September 14, 1422, a treaty of peace was .sgned between Prince Korybut and the Praguers on one side, Zizka and the Taborites on the other. This treaty was signed on a spot then known as the "Spitalske Pole" (hoSe.tal field,) on the spot where Karlin, the subui,i; of Prague, now stands. It was largely diie to the eloquence of the young priest John of Rokysan, who afterwards became very celebrated as utraquist Archbishop of Prague. The exact terms of the treaty are not known to us, but the reconciliation was a complete one, for immediately afterwards the utraquist lords and Praguers under Korybut, and the Taborites under Zizka, marched together aeeinst leloravia, then in the power of Sigismund's son-in-law, Albert of Austria. Before the allies had reached Moravia, Zizka died of the plague during the sie ge of the castle of Ptibislav, not fur from the Moravian frontier (October 11, 1424). Many untruthful and invidious accounts of the death of the great Bohemian general were circulated by the enemies of his nation, and have constantly repeated even by writers as recent as Carlyle. They may be traced to Aeneae Sylvius, who states that Zizka, died bla.erning, and ordered that his body should be flayed, his skin used as a drum, and his body thrown to the wild beasts. In contrast to these tales, so obviously in opposition to the nature of ZiI.a as recent research has revealed it to us, it may be well to quote the account of a contemporary writer, not improbably, an eye-witness. He writes: "Here at Pfibislave brother 2 E 1 a was seized by a deadly attack of the plague. He gave his 'last charge to his faithful Bohemians, (saying)i, that, fearing,. their beloved God, they should firmly and faithfully defend God's law in view of His reward in eternity; and then brother 2 iaa commended his soul to God, and died on the Wenesday before the day of St. Gallus." Even for the great Bohemian patriot. He who had had we got historical evidence to the point, this tranquill death would appear a fitting end so often fought what he firmly considered God's battles, assuredly did not dread entering into God's peace. The importance of 1:Om's position in history can hardly be exaggerated. As has been already noticed, it was entirely due to him and to his exceptional military genius that the Hussite movement did not collapse as soon as large armed forces were moved against Bohemia. Had not the genius of '2 01m contrived to render the Bohemian warriors for the time invincible, the name of the Hussites would be unknown to history, in which Hus would only a p pear as an isolated enthusiast like Savonarola. The iee me.diate consequences of the death of ' 1.21,:a were of great importance to Bohemia. He was in command of a large army. Had he heed and freed Moravia, as Bohemia had been, from the power of Sigismund and Albert, a Diet of the two lands would have assembled

Ve stfedu, dne 3. zaki 1941. and in all probability have definitely declared Prince Sigismund Korybut king. The death of their great leader did not for the moment weaken the Bohemian armies, and able leaders formed in inla's school took the command of the utraquist forces. "ti2ka's blindness had that advantage, that his military talents had been already largely transferred to his lieutenants and aides-decamp. Obliged to see through their eyes, he taught them all the better to notice the advantages afforded either by the disposition of the ground, or by his own experience in the distribution of his forces." Divisions among 'Ziaka's followers arose almost immediately after his death, the causes of which do not ap pear clearly from contemporary records. One of the patties retained the name of Taborites, while the other, consisting -probably of i2ka's more immediate associates, assumed that of the Orphans, thus indicating that they had, in losing Zizka, lost their father. The two parties appear to have divided the captured towns and castles among themselves; Tabor remained the head-quarters of the Taborites, while Kralove Hradec became the erincipal stronghold of the Orphans. The first commander of the Orphans was Kune'S of Delovic, and of the Taborites, Hvezda of Vicemilit. The two priests Prokop (who are better known to readers of history, and whom Aeneas Sylvius mentions as immediate successors of Eka) only obtained command of the Hussite forces somewhat later. The estrangement of the old followers of fti2ka was merely temporary, but it none the less raised the hopes of the utraquist nobles cud their allies of Prague. They believed that if they susceeded in suppressing the more advanced faction, it would become easier for them to make terms with their foreign enemies, and perhaps to secure the recognition of Prince Sigismund Korybut as king. Warfare between the national or utraquist parties—the Taborites and tl. e Or phans forming one, the Praguers and the nobles allied with them the other side—broke out in various parts of Bohemia early in the year 1425. After the capture of the castle of WohC by the Tabo-, rites, whose leader, Hvezda, was mortally vounded during the siege, peace was concluded between the contending parties. This time also we are not informed as to the terms of the agreement. We are only told that it was decided that all the Bohemians should together undertake a campaign against Sigis-, mund and his son-in-law, Albert of Austria. Probably in consequence of the agreement of voLc, a Diet—presided over by Prince Korybut—assembled at Prague, at which not only members of all the national parties, but also some of the papal party were present. Some members of the latter party about this 'date concluded a truce with the utraquists, as their expectations of help from King Sigismund gradually decreased King Sigismund had, however, by no means abandoned his hopes of regaining Bohemia. Before the treaty of VoLc had been concluded, the king had collected a large army in Moravia, intending to enter Bohemia. The various forces of the utraquists now united according to the agreement, marched against him, and forced him to evacuate Moravia; they then pursued him into Austria, where they besieged and captured the town of Betz. During the siege, Bohuslav of Schwamberg, who had succeeded Hvezda of Vicemilic as leader of the Taborites, was killed; and Prokop, surnamed the Great, a maried Taborite priest who belonged to a family of Prague citizens, became their chief. To be continued V SUFFOCATED Street Car Conducto •• This transfer has expired, madam. Madam: Well, no wonder, with the air so bad in here. 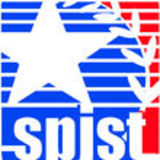