1.the number of people that can be seated in a vehicle or auditorium or stadium etc.

The Indianapolis Motor Speedway has the largest seating capacity of any venue in the world.

Seating capacity is the number of people who can be seated in a specific space, both in terms of the physical space available, and in terms of limitations set by law. Seating capacity can be used in the description of anything ranging from an automobile that seats two to a stadium that seats over 100,000 people. The largest sporting venue in the world, the Indianapolis Motor Speedway, has a permanent seating capacity for more than 257,000 people and infield seating that raises capacity to an approximate 400,000. 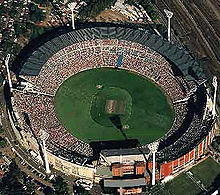 An aerial view of the Melbourne Cricket Ground during the 1992 Cricket World Cup final packed with 90,000 people.

Safety is a primary concern in determining the seating capacity of a venue, as "[s]eating capacity, seating layouts and densities are largely dictated by legal requirements for the safe evacuation of the occupants in the event of fire".[1] The International Building Code specifies that "[i]n places of assembly, the seats shall be securely fastened to the floor", providing exceptions if the total number of seats is fewer than 100, if there is a substantial amount of space available between seats, or if the seats are at tables.[2] It also delineates the number of available exits for interior balconies and galleries based on the seating capacity,[3] and sets forth the number of required wheelchair spaces in a table derived from the seating capacity of the space.[4]

The International Fire Code, portions of which have been adopted by many jurisdictions, is directed more towards the use of a facility than the construction. It specifies that "[f]or areas having fixed seating without dividing arms, the occupant load shall not be less than the number of seats based on one person for each 18 inches (457 mm) of seating length".[5] It also requires that every public venue submit a detailed site plan to the local fire code official, including "details of the means of egress, seating capacity, [and] arrangement of the seating..."[6]

Once safety considerations have been satisfied, determinations of seating capacity turn on the total size of the venue, and its purpose. For sports venues, "[t]he decision on maximum seating capacity is determined by several factors. Chief among these are the primary sports program and the size of the market area".[7] In motion picture venues, "[t]he limit of seating capacity is determined by the maximal viewing distance for a given size of screen", with image quality for closer viewers declining as the screen is expanded to accommodate more distant viewers.[8]

Seating capacity differs from total capacity (sometimes called public capacity), which describes the total number of people who can fit in a venue or in a vehicle either sitting or standing. Where seating capacity is a legal requirement, however – as it is in movie theaters and on aircraft – then the law reflects the fact that the number of people allowed in should not exceed the number who can be seated. Use of the term "public capacity" indicates that a venue can permissibly hold more people than it can actually seat. Again, this maximum total number of people can refer to the physical space available, or limitations set by law.