verifiedCite
While every effort has been made to follow citation style rules, there may be some discrepancies. Please refer to the appropriate style manual or other sources if you have any questions.
Select Citation Style
Share
Share to social media
Facebook Twitter
URL
https://www.britannica.com/art/motion-picture
Feedback
Thank you for your feedback

Join Britannica's Publishing Partner Program and our community of experts to gain a global audience for your work!
External Websites
Britannica Websites
Articles from Britannica Encyclopedias for elementary and high school students.
print Print
Please select which sections you would like to print:
verifiedCite
While every effort has been made to follow citation style rules, there may be some discrepancies. Please refer to the appropriate style manual or other sources if you have any questions.
Select Citation Style
Share
Share to social media
Facebook Twitter
URL
https://www.britannica.com/art/motion-picture
Feedback
Thank you for your feedback 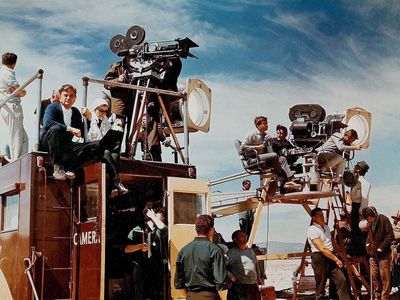 What is a film?

A film, also called a movie or a motion picture, is a series of still photographs on film projected onto a screen using light in rapid succession. The optical phenomenon known as persistence of vision gives the illusion of actual, smooth, and continuous movement.

What are the different types of films?

Films can be classified as documentaries, experimental films, animated films, and fictional genres such as westerns, comedies, thrillers, and musicals, among many others.

What are some of the major film festivals?

What awards are given for films?

Some of the major awards given for films are the Academy Awards, the British Academy of Film and Television Awards, and the Césars.

film, also called motion picture or movie, series of still photographs on film, projected in rapid succession onto a screen by means of light. Because of the optical phenomenon known as persistence of vision, this gives the illusion of actual, smooth, and continuous movement.

Film is a remarkably effective medium in conveying drama and especially in the evocation of emotion. The art of motion pictures is exceedingly complex, requiring contributions from nearly all the other arts as well as countless technical skills (for example, in sound recording, photography, and optics). Emerging at the end of the 19th century, this new art form became one of the most popular and influential media of the 20th century and beyond.

Britannica Quiz
A Movie Lesson
Who directed Avatar? Which hit movie from 1986 was about the U.S. Navy’s best aviators? Test your knowledge of cinema in this quiz.

As a commercial venture, offering fictional narratives to large audiences in theatres, film was quickly recognized as perhaps the first truly mass form of entertainment. Without losing its broad appeal, the medium also developed as a means of artistic expression in such areas as acting, directing, screenwriting, cinematography, costume and set design, and music.

In its short history, the art of motion pictures has frequently undergone changes that seemed fundamental, such as those resulting from the introduction of sound. It exists today in styles that differ significantly from country to country and in forms as diverse as the documentary created by one person with a handheld camera and the multimillion-dollar epic involving hundreds of performers and technicians.

A number of factors immediately come to mind in connection with the film experience. For one thing, there is something mildly hypnotic about the illusion of movement that holds the attention and may even lower critical resistance. The accuracy of the film image is compelling because it is made by a nonhuman, scientific process. In addition, the motion picture gives what has been called a strong sense of being present; the film image always appears to be in the present tense. There is also the concrete nature of film; it appears to show actual people and things.

No less important than any of the above are the conditions under which the motion picture ideally is seen, where everything helps to dominate the spectators. They are taken from their everyday environment, partially isolated from others, and comfortably seated in a dark auditorium. The darkness concentrates their attention and prevents comparison of the image on the screen with surrounding objects or people. For a while, spectators live in the world the motion picture unfolds before them.

Still, the escape into the world of the film is not complete. Only rarely does the audience react as if the events on the screen are real—for instance, by ducking before an onrushing locomotive in a special three-dimensional effect. Moreover, such effects are considered to be a relatively low form of the art of motion pictures. Much more often, viewers expect a film to be truer to certain unwritten conventions than to the real world. Although spectators may sometimes expect exact realism in details of dress or locale, just as often they expect the film to escape from the real world and make them exercise their imagination, a demand made by great works of art in all forms.

The sense of reality most films strive for results from a set of codes, or rules, that are implicitly accepted by viewers and confirmed through habitual filmgoing. The use of brownish lighting, filters, and props, for example, has come to signify the past in films about American life in the early 20th century (as in The Godfather [1972] and Days of Heaven [1978]). The brownish tinge that is associated with such films is a visual code intended to evoke a viewer’s perceptions of an earlier era, when photographs were printed in sepia, or brown, tones. Storytelling codes are even more conspicuous in their manipulation of actual reality to achieve an effect of reality. Audiences are prepared to skip over huge expanses of time in order to reach the dramatic moments of a story. La battaglia di Algeri (1966; The Battle of Algiers), for example, begins in a torture chamber where a captured Algerian rebel has just given away the location of his cohorts. In a matter of seconds that location is attacked, and the drive of the search-and-destroy mission pushes the audience to believe in the fantastic speed and precision of the operation. Furthermore, the audience readily accepts shots from impossible points of view if other aspects of the film signal the shot as real. For example, the rebels in The Battle of Algiers are shown inside a walled-up hiding place, yet this unrealistic view seems authentic because the film’s grainy photography plays on the spectator’s unconscious association of poor black-and-white images with newsreels.

Fidelity in the reproduction of details is much less important than the appeal made by the story to an emotional response, an appeal based on innate characteristics of the motion-picture medium. These essential characteristics can be divided into those that pertain primarily to the motion-picture image, those that pertain to motion pictures as a unique medium for works of art, and those that derive from the experience of viewing motion pictures.