You have reached the cached page for https://www.rottentomatoes.com/m/scary_movie
Below is a snapshot of the Web page as it appeared on 10/21/2020 (the last time our crawler visited it). This is the version of the page that was used for ranking your search results. The page may have changed since we last cached it. To see what might have changed (without the highlights), go to the current page.
You searched for: +Scary Movie movie We have highlighted matching words that appear in the page below.
Bing is not responsible for the content of this page.
Scary Movie (2000) - Rotten Tomatoes
Home
Top Box Office
Tickets & Showtimes
DVD & Streaming
TV
News 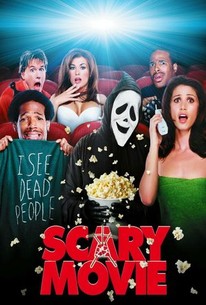 Critics say Scary Movie overloads on crudity and grossness to get its laughs.

Defying the very notion of good taste, Scary Movie out-parodies the pop culture parodies with a no-holds barred assault on the most popular images and talked-about moments from recent films, television and commercials. The film boldly fires barbs at the classic scenes from "Scream," "The Sixth Sense," "The Matrix," "I Know What You Did Last Summer" and "The Blair Witch Project," then goes on to mock a whole myriad of teen movie clichés, no matter the genre.