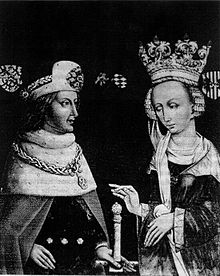 Rupert with his wife Beatrice

He was the elder son of Adolf, Count Palatine of the Rhine and Countess Irmengard of Oettingen. On 13 February 1338 the Palatinate was divided between Rupert II and his uncle Rudolf II, Duke of Bavaria.[citation needed] After the death of his other uncle, the Elector Rupert I (who had succeeded Rudolf II), on 16 February 1390 he was proclaimed Elector Palatine with the consent of Wenceslaus, King of the Romans. In 1391 he banished Jews and prostitutes from the Palatinate, confiscated their property, and bequeathed it to the Ruprecht Karl University of Heidelberg. In 1395 he promulgated the so-called Rupertinische Konstitution which was intended to provide for unity of the Palatinate. Among other provisions, he incorporated to his realm the former Imperial Free City Neckargemünd.

He was buried in a Cistercian cloister in Heidelberg.

He was married in 1345 to Beatrix of Sicily and Aragon, daughter of King Peter II of Sicily. They had the following children: