You have reached the cached page for https://www.dailymail.co.uk/news/article-6699557/Walk-wardrobe-old-Richmond-Palace-sale-4million-south-west-London.html
Below is a snapshot of the Web page as it appeared on 10/26/2020 (the last time our crawler visited it). This is the version of the page that was used for ranking your search results. The page may have changed since we last cached it. To see what might have changed (without the highlights), go to the current page.
You searched for: +Richmond Palace We have highlighted matching words that appear in the page below.
Bing is not responsible for the content of this page.
Walk-in wardrobe of old Richmond Palace up for sale for £4million south west London | Daily Mail Online

Now this is quite the walk-in wardrobe! House once used by Tudor monarchs to store their clothes is now a beautiful home up for sale for £4million

By Lara Keay For Mailonline

A walk-in wardrobe used by Tudor royalty once part of Queen Elizabeth I's favourite palace is now a three-bedroom home on the market for £4million.

Three terraced properties known as the Wardrobe are the only surviving part of Richmond Palace, built by Henry VII on the site of the medieval Sheen Palace in south west London between 1498 and 1501.

Now one of them has been put up for sale complete with three bedrooms, two bathrooms, several impressive living spaces and a sprawling private garden.

The Grade I listed property is located between Richmond Green and the River Thames and used to be the place where clothes were stored for the likes of Henry VII, Henry VIII and Elizabeth I. 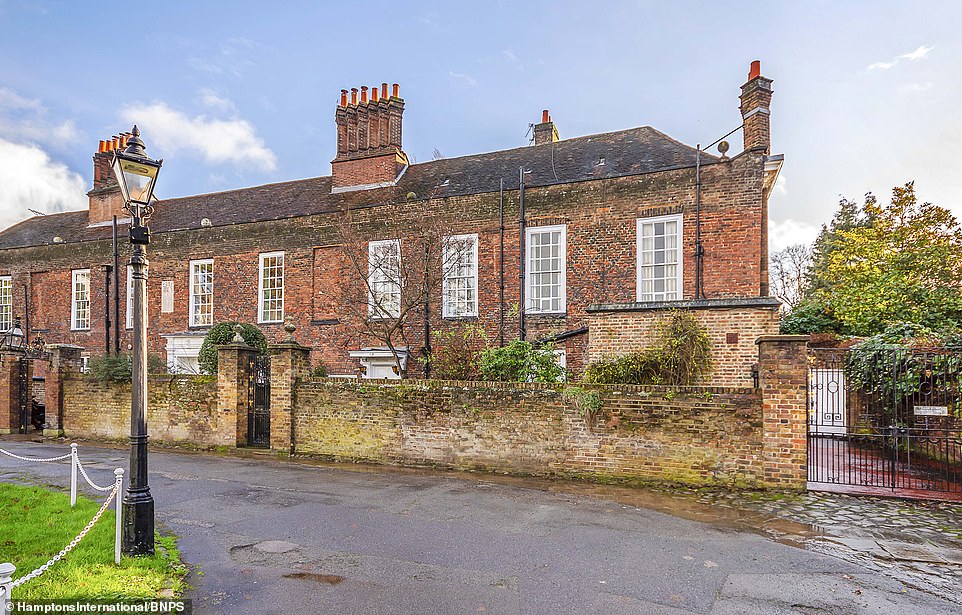 A terraced house (pictured from the front) formerly used as a walk-in wardrobe for residents at Richmond Palace in south west London is now on the market for £4million. The palace was built by Henry VII on the site of the medieval Sheen Palace, between 1498 and 1501 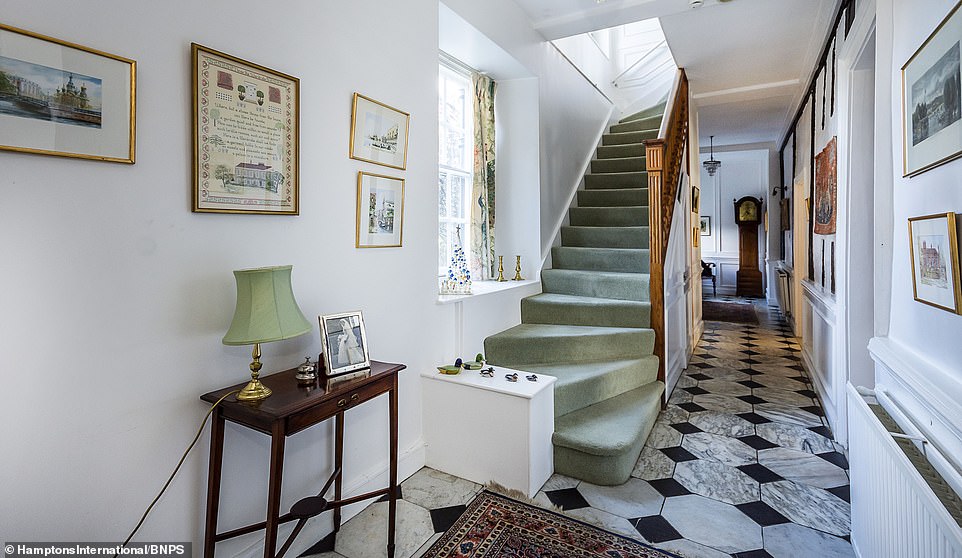 The row of houses is known as the Wardrobe and is one of a few surviving parts of Richmond Palace, south west London, near the River Thames. One of the three terraced properties (downstairs hallway pictured) has been put on the market for £4m 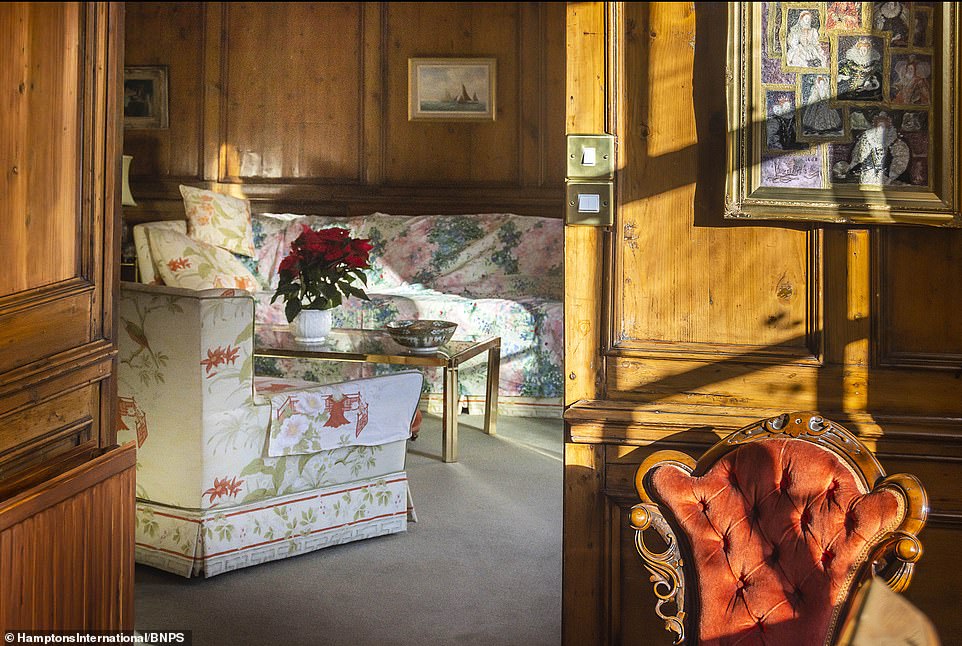 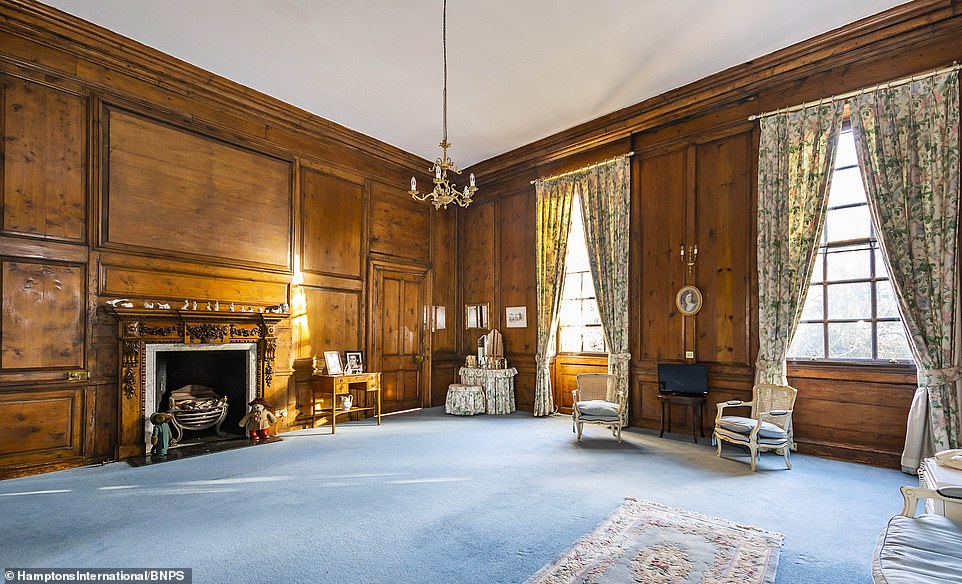 The period features make the property a one-off with large windows, a traditional log fireplace and wooden walls and doors 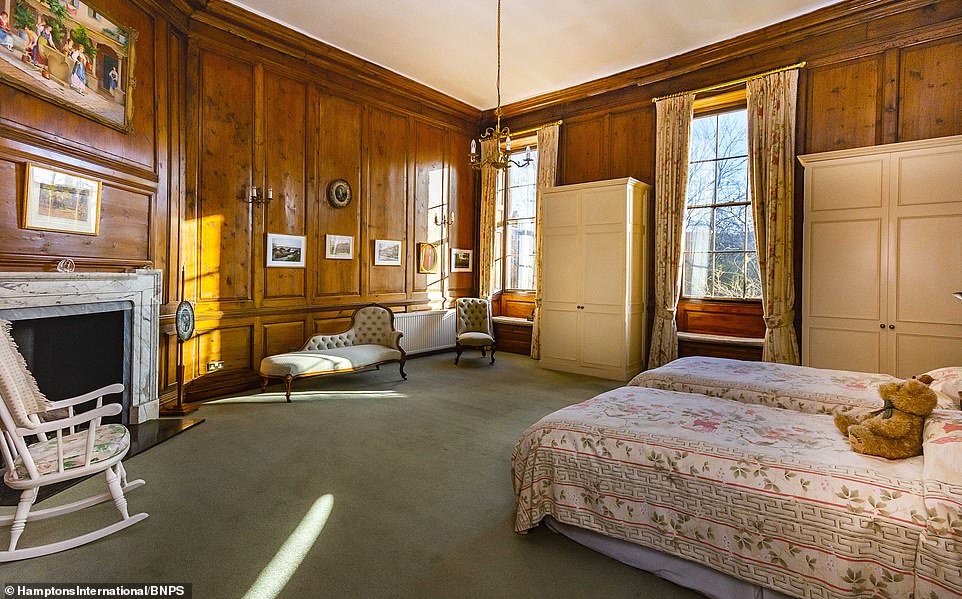 There are three bedrooms. This twin room has been adapted for young children but could be used for a couple

It was commissioned for King Henry VII around the turn of the 16th century and passed to Henry VIII when his father died.

Henry's daughter Elizabeth took it over when he died and remained there until 1603 when she died. It was then used by the Stuart Princes of Wales.

It was used until around 1660 when it was left in ruins. It remained one property until it was restored and converted into three in 1957.

This property has 2,975 sq ft of accommodation with an entrance hall, drawing room, dining room, kitchen/breakfast room, study, utility room, three bedrooms and two bathrooms, as well as a summer house in the back garden and another 1,314 sq ft of storage space in the loft. 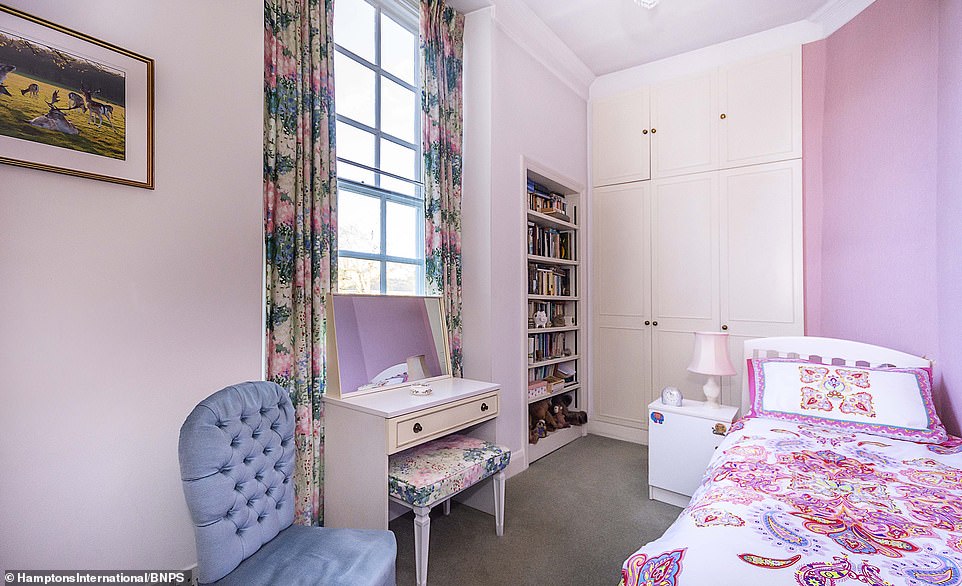 The Wardrobe house has three bedrooms (one pictured) in varying sizes. This one has been decorated for a young girl 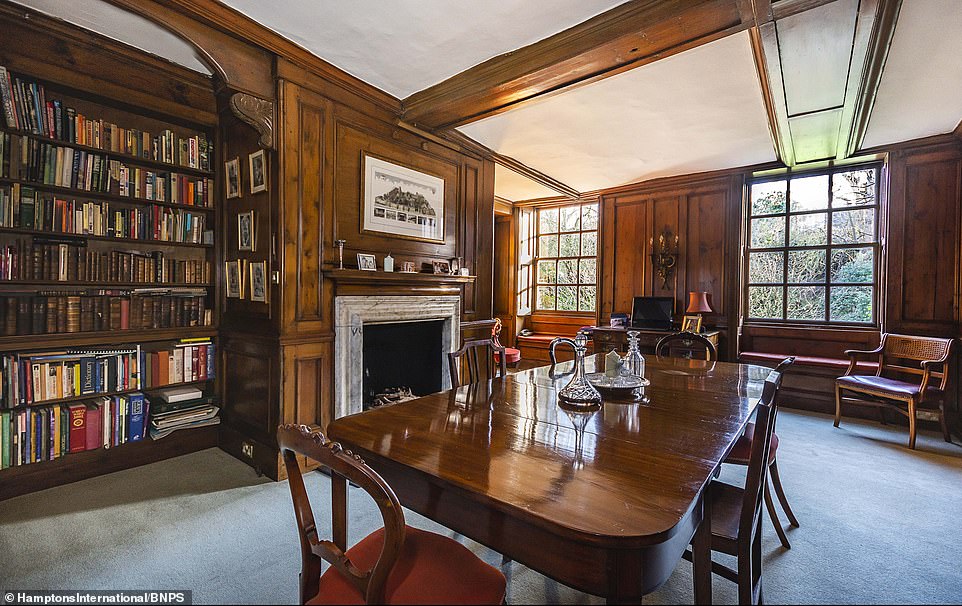 The large private garden is boundaried by one of the original palace walls, believed to have once had access through it to the palace chapel. It also has a pond and an ancient Judas tree.

Matthew Gilbert, from Hamptons International, said: 'It's got quite an interesting history to it - it's one of only three bits of the palace that survived.

'The house has some interesting features - almost certainly all of the panelling is original and there are a couple of wooden handcarved fireplaces, one of which has a split pea pod.

'In Tudor times the carvers would carve a pea pod into the design, if it was open and showed the peas it meant the workers had been paid but if the owner did not pay fully they would carve a closed pod.

'You get to this building through the original arch, the gatehouse which also survives, into the courtyard, which is private and just for residents. 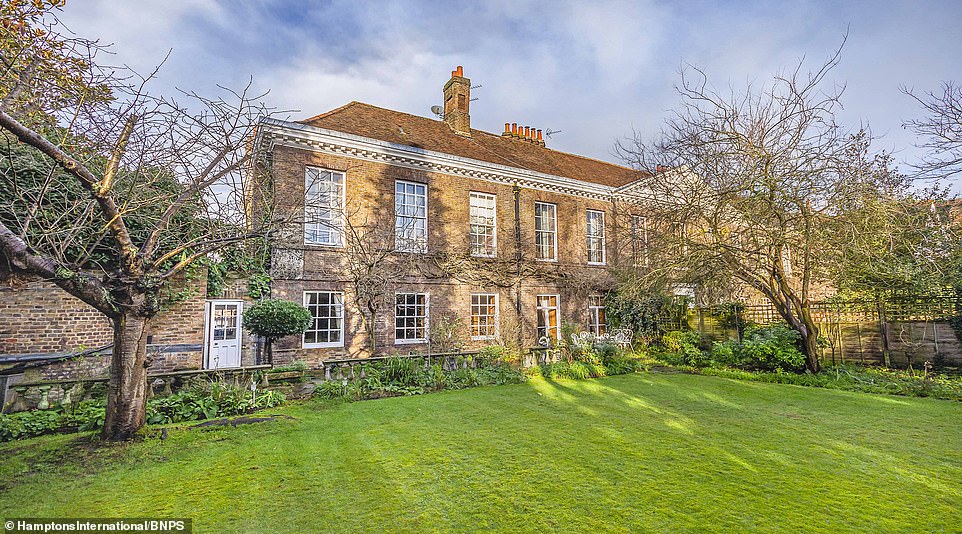 The Wardrobe properties are pictured from behind with a sprawling garden, perfectly-maintained lawn and patio area 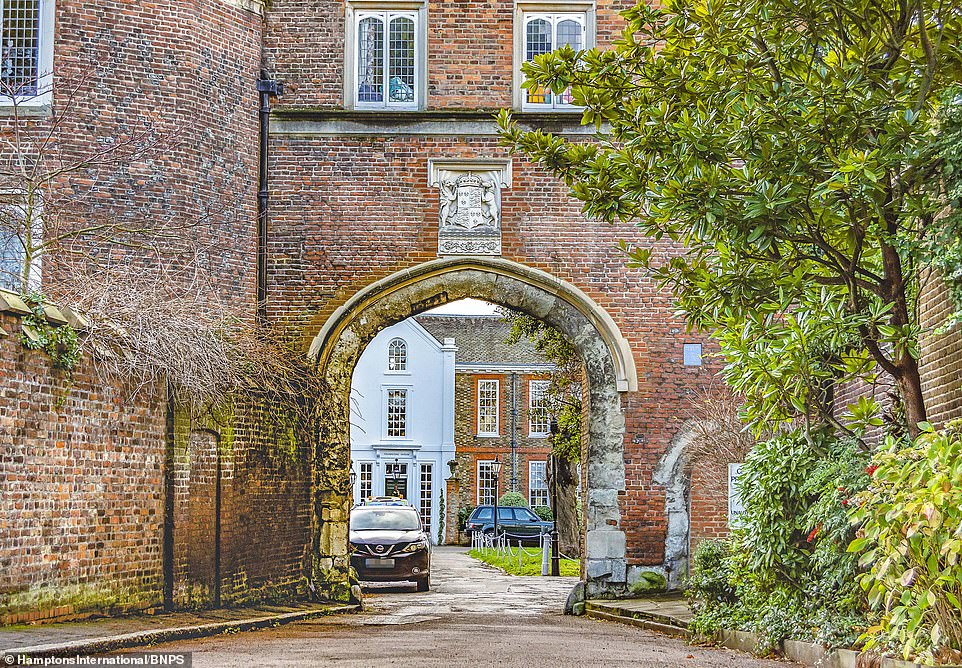 The large private garden is boundaried by one of the original palace walls (pictured) believed to have once led to the palace chapel. It also has a pond and an ancient Judas tree and sits between the Thames and Richmond Green 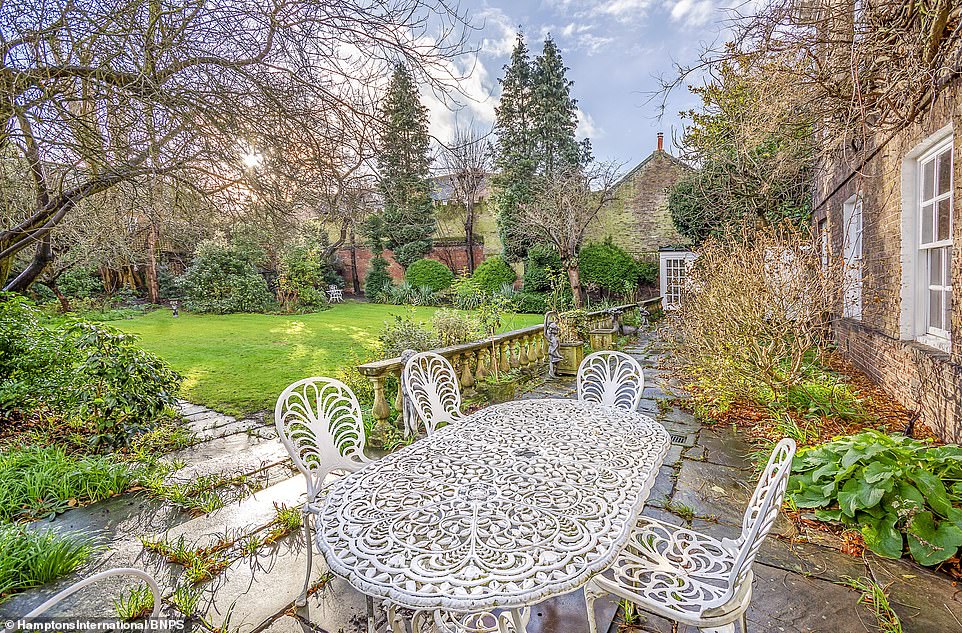 The outdoor area boasts a patio with table and chairs, a large lawn, plant and shrub areas, a pond and an antique Judas tree

'The land it is on is still owned by the crown, ie the royal family, so its a leasehold but this house has quite a long lease on it, which makes it more desirable.

'It's a very rare opportunity, there are only three of them and they don't come on the market often. The family that own this one have had it for more than 30 years.

'This house has an enormous garden, even for Richmond, which has larger gardens than a lot of London, this is considered huge.

'I think it would appeal to a buyer who wants something completely unique in the London property market. It's got that immeasurable wow factor and you can imagine throwing some great dinner parties there.

'It's proximity to everything is key. Inside the house you could miles away from London, it feels very tucked away, but you're within a few minutes walk of Richmond high street and right on top of everything.' 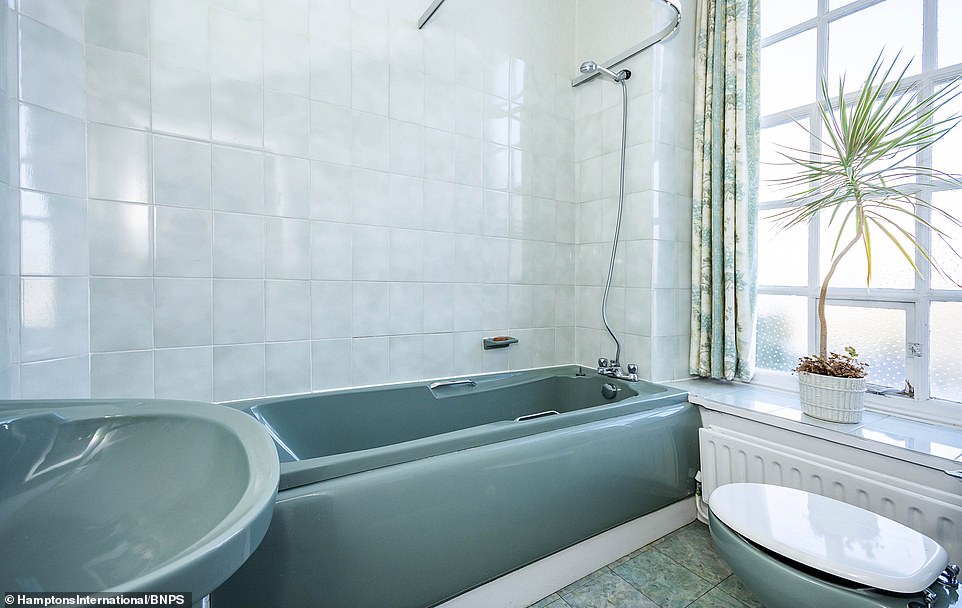 One of the bathrooms (pictured) has a retro feel with a teal toilet, bath and sink and a large window ensuring maximum light 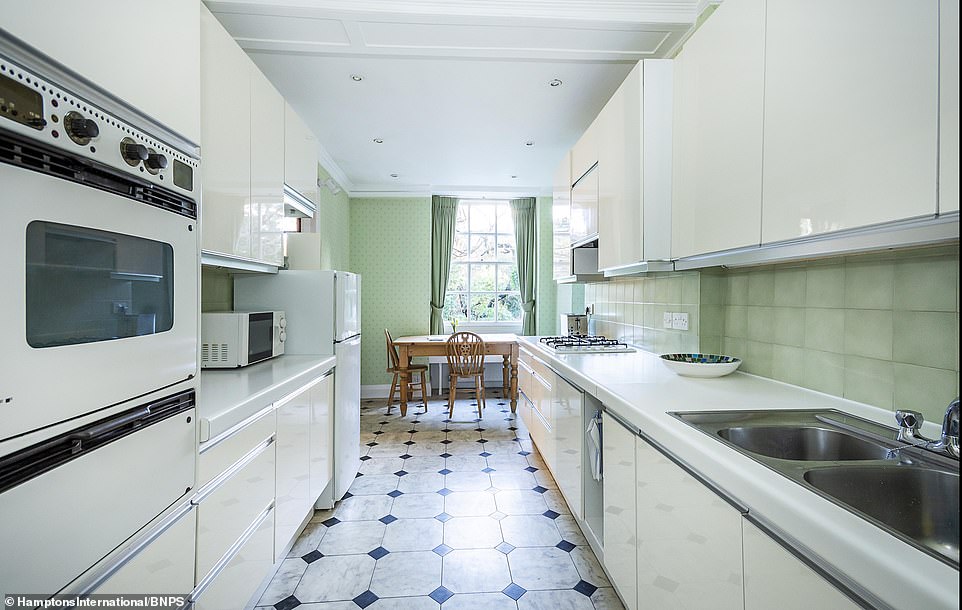 The kitchen also has an old-fashioned feel with vintage counters and a traditional black and white tiled floor. The large window looks onto the garden with a table for people to look out and enjoy the scenery 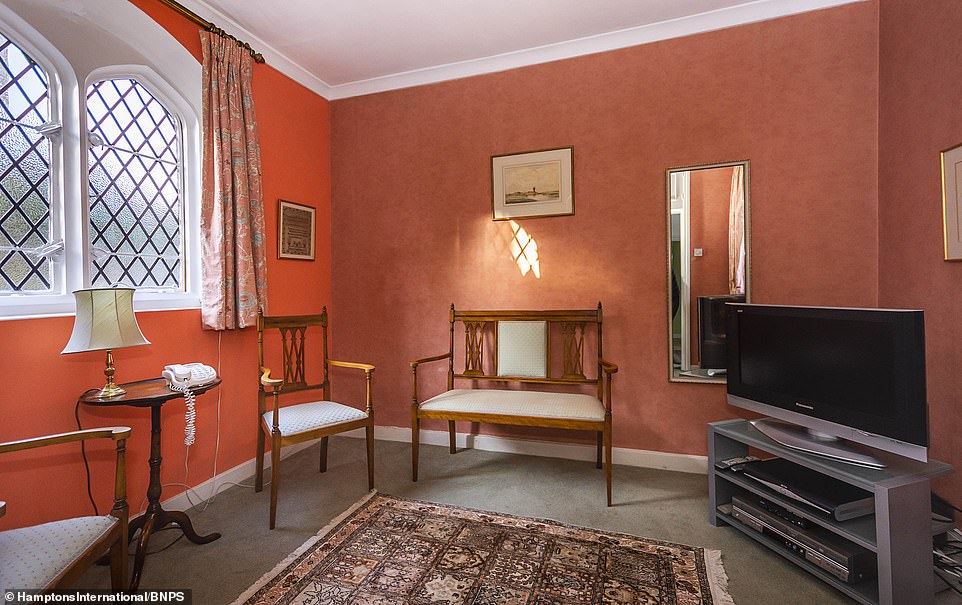 This living area is decorated in bright and dusty orange to ensure maximum warmth. The traditional windows give the room a period feel with matching soft and hard furnishings 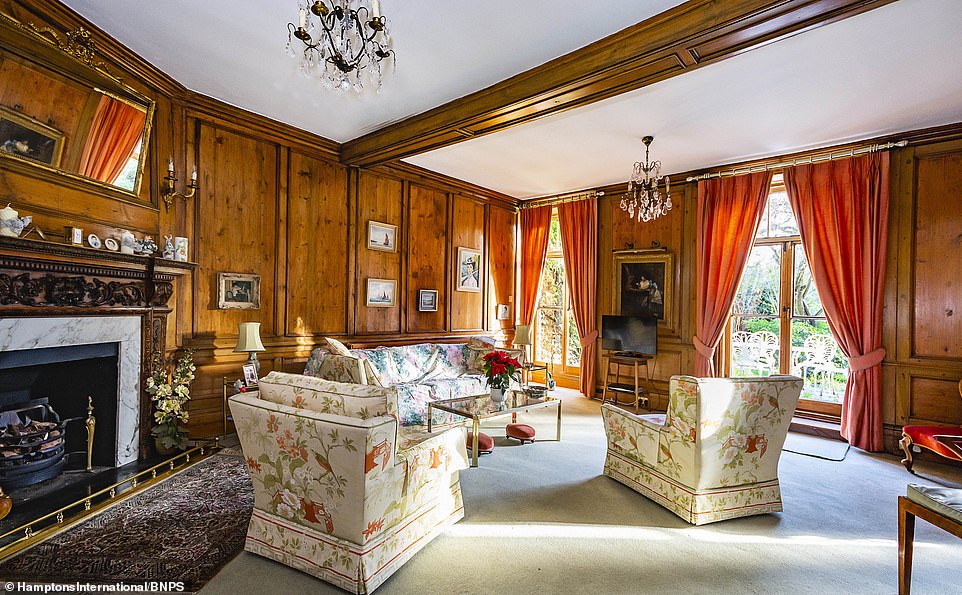 Another large living area looks out onto the sprawling garden. Its wooden walls and period fireplace are true to its Tudor past 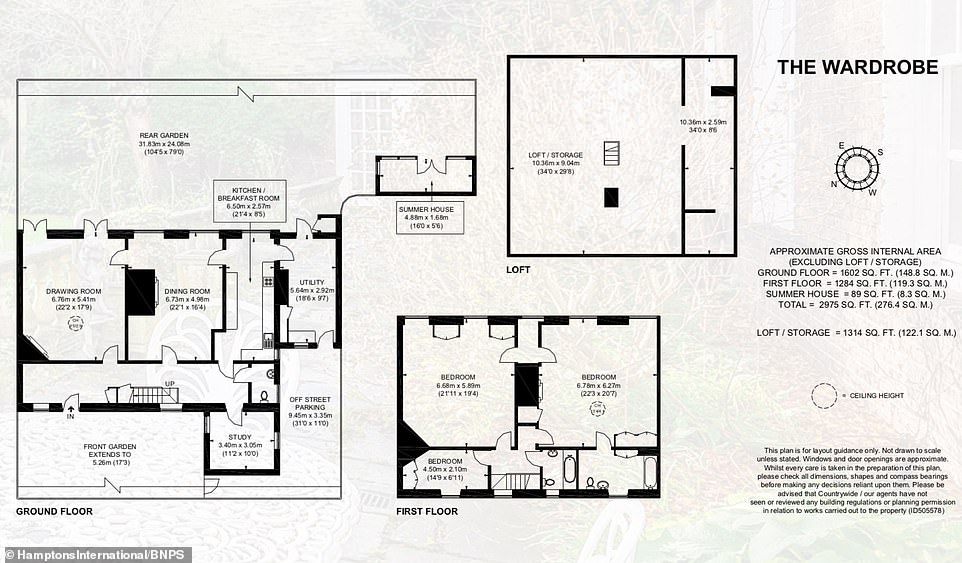 A floor plan shows the extent of the property, which comes complete with an entrance hall, drawing room, dining room, kitchen/breakfast room, study, utility room, three bedrooms and two bathrooms, as well as a summer house in the back garden and another 1,314 sq ft of storage space in the loft