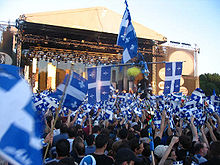 Canada was first a French colony. Jacques Cartier claimed it for France in 1534, and permanent French settlement began in 1608. It was part of New France, which constituted all French colonies in North America.[1] Up until 1760, "Canadien" nationalism had developed itself free of all external influences. However, during the Seven Years' War, the British army invaded the French colony as part of its North American strategy, winning a conclusive victory at the Battle of the Plains of Abraham. At the Treaty of Paris (1763), France agreed to abandon its claims in Canada in return for permanent French control of Guadeloupe. From the 1760s onward, Canadien nationalism developed within a British constitutional context. Despite intense pressure from outside Parliament, the British government drafted the Quebec Act which guaranteed Canadiens the restoration of French civil law; guaranteed the free practice of the Catholic faith; and returned the territorial extensions that they had enjoyed before the Treaty of Paris.[1] In effect, this 'enlightened' action by leaders in the British Parliament allowed French Canada to retain its unique characteristics.[2][3] Although detrimental to Britain's relationship with the Thirteen Colonies, this has, in its contemporary assessment, been viewed as an act of appeasement and was largely effective at dissolving Canadien nationalism in the 18th century (especially considering the threat and proximity of American revolutionary ideology) yet it became less effective with the arrival of Loyalists after the revolutions.[4] With the Loyalists splitting the Province of Quebec into two identities; Upper Canada and Lower Canada, Canadiens were now labelled by the Loyalists as French Canadians.[1]

From 1776 to the late 1830s the world witnessed the creation of many new national states with the birth of the United States of America, the French Republic, Haiti, Paraguay, Argentina, Chile, Mexico, Brazil, Peru, Colombia, Belgium, Greece and others. Often accomplished militarily, these national liberations occurred in the context of complex ideological and political struggles pitting European metropoles against their respective colonies, often assuming the dichotomy of monarchists against republicans. These battles succeeded in creating independent republican states in some regions of the world, but they failed in other places, such as Ireland, Upper Canada, Lower Canada, and Germany.

There is no consensus on the exact time of the birth of a national consciousness in French Canada. Some historians defend the thesis that it existed before the 19th century, because the Canadiens saw themselves as a people culturally distinct from the French even in the time of New France. The cultural tensions were indeed palpable between the governor of New France, the Canadian-born Pierre de Vaudreuil and the General Louis-Joseph de Montcalm, a Frenchman, during the French and Indian War. However, the use of the expression la nation canadienne (the Canadian nation) by French Canadians is a reality of the 19th century. The idea of a nation canadienne was supported by the liberal or professional class in Lower Canada: lawyers, notaries, librarians, accountants, doctors, journalists, and architects, among others.

A political movement for the independence of the Canadien people slowly took form following the enactment of the Constitutional Act of 1791. The Act of the British Parliament created two colonies, Lower Canada and Upper Canada, each of which had its own political institutions.[1] In Lower Canada, the French-speaking and Catholic Canadiens held the majority in the elected house of representatives, but were either a small minority or simply not represented in the appointed legislative and executive councils, both appointed by the Governor, representing the British Crown in the colony. Most of the members of the legislative council and the executive council were part of the British ruling class, composed of wealthy merchants, judges, military men, etc., supportive of the Tory party. From early 1800 to 1837, the government and the elected assembly were at odds on virtually every issue.

Under the leadership of Speaker Louis-Joseph Papineau, the Parti canadien (renamed Parti patriote in 1826) initiated a movement of reform of the political institutions of Lower Canada. The party's constitutional policy, summed up in the Ninety-Two Resolutions of 1834, called for the election of the legislative and executive councils.

The movement of reform gathered the support of the majority of the representatives of the people among Francophones but also among liberal Anglophones. A number of the prominent characters in the reformist movement were of British origin, for example John Neilson, Wolfred Nelson, Robert Nelson and Thomas Storrow Brown or of Irish extraction, Edmund Bailey O'Callaghan, Daniel Tracey and Jocquelin Waller.

Two currents existed within the reformists of the Parti canadien: a moderate wing, whose members were fond of British institutions and wished for Lower Canada to have a government more accountable to the elective house's representative and a more radical wing whose attachment to British institutions was rather conditional to this proving to be as good as to those of the neighbouring American republics.

The formal rejection of all 92 resolutions by the Parliament of Great Britain in 1837 lead to a radicalization of the patriotic movement's actions. Louis-Joseph Papineau took the leadership of a new strategy which included the boycott of all British imports. During the summer, many popular gatherings (assemblées populaires) were organized to protest against the policy of Great Britain in Lower Canada. In November, Governor Archibald Acheson ordered the arrest of 26 leaders of the patriote movement, of which Louis-Joseph Papineau and many other reformists members of parliament. This instigated an armed conflict which developed into the Lower Canada Rebellion.

Following the repression of the insurrectionist movement of 1838, many of the most revolutionary nationalist and democratic ideas of the Parti patriote were discredited.

Although it was still defended and promoted up until the beginning of the 20th century, the French-Canadian liberal nationalism born out of the American and French revolutions began to decline in the 1840s, gradually being replaced by both a more moderate liberal nationalism and the ultramontanism of the powerful Catholic clergy as epitomized by Lionel Groulx.

In opposition with the other nationalists, ultramontanes rejected the idea that the people are sovereign and that church and state should be absolutely separated. They accepted the authority of the British crown in Canada, defended its legitimacy, and preached obedience to the British ruler. For ultramontanes, the faith of Franco-Canadians was to survive by defending their Roman Catholic religion and the French language.

Understanding contemporary Quebec nationalism is difficult considering the ongoing debates on the political status of the province and its complex public opinion.[5][6] No political option (outright independence, sovereignty-association, constitutional reforms, or signing on to the present Canadian constitution) has achieved decisive majority support and contradictions remain within the Quebec polity.

One debated subject that has often made the news is whether contemporary Quebec nationalism is still "ethnic" or if it is "linguistic" or "territorial".

The notion of "territorial nationalism" (promoted by all Quebec premiers since Jean Lesage) gathers the support of the majority of the sovereignists and essentially all Quebec federalist nationalists. Debates on the nature of Quebec's nationalism are currently going on and various intellectuals from Quebec or other parts of Canada have published works on the subject, notably Will Kymlicka, professor of philosophy at Queen's University and Charles Blattberg and Michel Seymour, both professors at the Université de Montréal.

People who feel that Quebec nationalism is still ethnic, have often expressed their opinion that the worldview of Quebec's nationalists is insular and parochial and concerned with preserving a "pure laine" population of white francophones within the province. These accusations have always been vigorously denounced by Quebec nationalists of all sides and are generally considered[by whom?] as unrepresentative of the intellectual and mainstream political movements in favour of a wider independence for Quebec, seeing the movement as a multi-ethnic cause. However, then Premier of Quebec Jacques Parizeau, commenting on the failure of the 1995 Quebec referendum said "It is true, it is true that we were beaten, but in the end, by what? By money and ethnic votes, essentially." "C'est vrai, c'est vrai qu'on a été battus, au fond, par quoi? Par l'argent puis des votes ethniques, essentiellement."

There is little doubt that the post-1950s era witnessed an awakening of Quebecers' self-identity. The rural, conservative and Catholic Quebec of the 19th and early 20th centuries has given way to a confident, cosmopolitan society that has many attributes of a modern, internationally recognized community with a unique culture worth preserving. In recent years, however, this has often been manifested in the reasonable accommodation debate, even or especially at official levels.

Recognition of the nation by Ottawa

For more details on this topic, see Québécois nation motion.

On October 21, 2006, during the General Special Council of the Quebec wing of the Liberal Party of Canada initiated a national debate by adopting with more than 80% support a resolution calling on the Government of Canada to recognize the Quebec nation within Canada. A month later, the said resolution was taken to Parliament first by the Bloc Québécois, then by the Prime Minister of Canada, Stephen Harper. On November 27, 2006, the Canadian House of Commons passed a motion recognizing that the "Québécois form a nation within a united Canada".[7][8][9][10][11][12][13][14][15][16][17][18][19][20]

For more details on this topic, see Bibliography of Quebec nationalism.

All translations of Quebec nationalism