The Grand Duchy of Tuscany was located in present-day northwest Italy. It existed, with a few interruptions, from 1569 – 1859. Tuscany was ruled by the de Medici family from 1434–1494 and from 1512 until the extinction of its senior branch in 1737. In 1569, Pope Pius V elevated Tuscany to a Grand Duchy and Cosimo I de’ Medici became its first Grand Duke.

Except for a period of thirteen years from 1801 – 1814 during the French Revolutionary Wars and Napoleonic Wars, the House of Habsburg-Lorraine retained the Grand Duchy of Tuscany until Tuscany was annexed to the Kingdom of Sardinia in 1860, as a part of the unification of Italy. In 1861, Vittorio Emanuele II, King of Sardinia was proclaimed the first King of the new, united Kingdom of Italy.

Grand Duke of Tuscany as Pietro Leopoldo I from 1765 – 1790 and Holy Roman Emperor as Leopold II from 1790 – 1792, Peter Leopold Josef Anton Joachim Pius Gotthard was born on May 5, 1747, in Vienna, Austria. Leopold, as was known, was the ninth of the sixteen children and the third but the second surviving of the five sons of Francis Stephen, Duke of Lorraine, Grand Duke of Tuscany, Holy Roman Emperor and Maria Theresa, Archduchess of Austria, and Queen of Hungary, Croatia, and Bohemia in her own right. His mother was the sovereign of Austria, Hungary, Croatia, Bohemia, Transylvania, Mantua, Milan, Lodomeria and Galicia, the Austrian Netherlands, and Parma. Maria Theresa, who had arranged for her husband to be elected Holy Roman Emperor, wielded the real power and Francis Stephen was content to leave the act of reigning to his wife. Leopold’s paternal grandparents were Leopold, Duke of Lorraine and Élisabeth Charlotte of Orléans. His maternal grandparents were Holy Roman Emperor Karl VI and Elisabeth Christine of Brunswick-Wolfenbüttel. 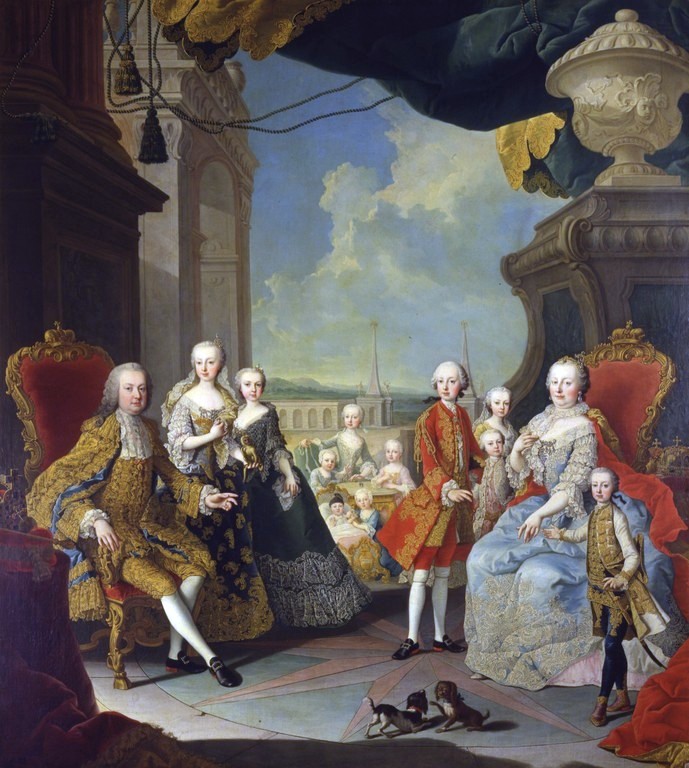 Leopold had fifteen siblings but six of them died in childhood. His youngest sister Maria Antonia married King Louis XVI of France and became the ill-fated Queen Marie Antoinette of France.

When Leopold’s father became Grand Duke of Tuscany, it was decided that the second son would inherit that title and territory. However, Karl Joseph, the second son, died from smallpox at the age of fifteen, and Leopold, the third son became the second surviving son and the heir to the Grand Duchy of Tuscany. Like all of his siblings, Leopold received an excellent education as befitted a prince during the Age of the Enlightenment. He was particularly interested in the natural sciences and all the new discoveries and ideas. In addition to German, Leopold mastered Latin, spoke French and Italian, and also spoke a little Czech.

On February 16, 1764, in Madrid, Spain Leopold was married by proxy to Infanta Maria Luisa of Spain, daughter of Carlos III, King of Spain and Maria Amalia of Saxony. 18-year-old Leopold and 20-year-old Maria Luisa were married in person on August 5, 1765, in Innsbruck, Austria. Sadly, just thirteen days later, Leopold’s father Francis Stephen died suddenly In Innsbruck of a stroke or heart attack, at the age of 56, in his carriage while returning from the opera. The eldest son was elected Holy Roman Emperor and reigned as Joseph II. The second (surviving) son Leopold succeeded his father as Pietro Leopoldo I, Grand Duke of Tuscany, and the newlyweds settled at the Palazzo Pitti in Florence, the capital of the Grand Duchy of Tuscany, where they would live for the next twenty-five years. 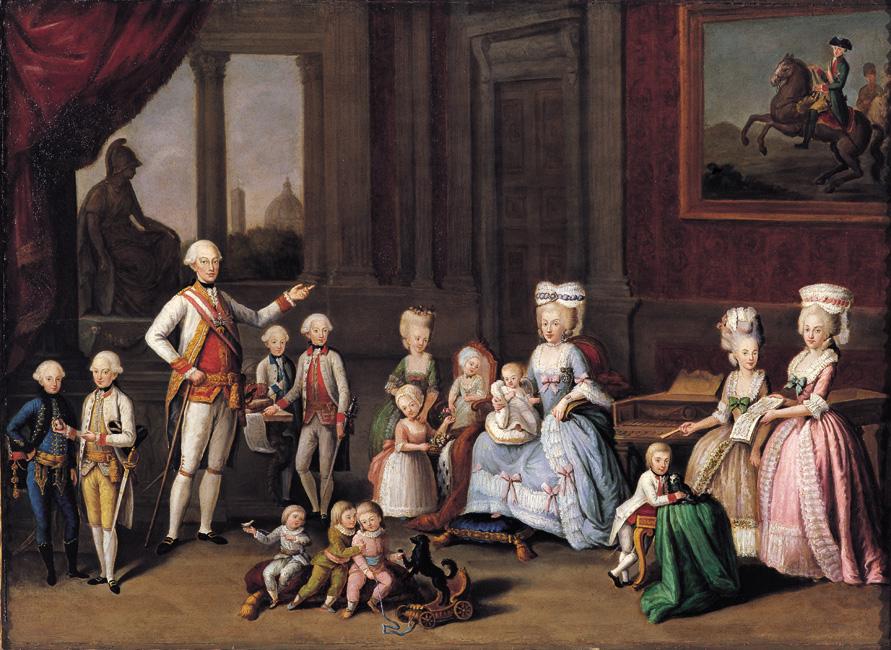 Leopold with his wife Maria Luise and their children; Credit – Wikipedia

Leopold and Maria Luisa had sixteen children. Because his elder brother Joseph II, Holy Roman Emperor had no children, Leopold became the founder of the main line of the House of Habsburg-Lorraine.

As Grand Duke of Tuscany, Leopold was a moderate proponent of enlightened absolutism and an advocate of the Leopoldine Code, a consolidation of the criminal law of the Grand Duchy of Tuscany that made the Grand Duchy the first country in the world to formally abolish the death penalty. Leopold was elected Holy Roman Emperor in 1790 after the death of his childless brother Joseph. At that time, he abdicated the throne of Tuscany in favor of his second son Ferdinand.

Leopold’s coronation as King of Hungary in Pressburg; Credit – Wikipedia

Leopold had three coronations. He was crowned Holy Roman Emperor on October 9, 1790, in the Imperial Free City of Frankfurt am Main. His coronation as King of Hungary in Pressburg, now Bratislava, Slovakia, took place on November 15, 1790, and then he was crowned King of Bohemia in Prague, now in the Czech Republic, on September 6, 1791. Wolfgang Amadeus Mozart‘s opera La clemenza di Tito was commissioned for the festivities that accompanied Leopold’s coronation as King of Bohemia.

Leopold’s short reign as Holy Roman Emperor saw problems from the east side of the constituent states of the Holy Roman Empire and also on the west side. The growing revolutionary feelings and actions in France endangered and eventually took the lives of his sister Marie Antoinette and her husband King Louis XVI, and also threatened Leopold’s territories with the spread of revolutionary agitation. From the east, Leopold was threatened by the aggressive ambitions of Catherine II (the Great), Empress of All Russia and Friedrich Wilhelm II, King of Prussia.

Death of Leopold with his wife and doctor at his bedside; Credit – Wikipedia

Less than three months after the sudden death of her husband, Maria Luisa died, aged 46, on May 15, 1792, at Hofburg Palace in Vienna, Austria. She was buried next to her husband in the Tuscan Crypt at the Imperial Crypt in Vienna, Austria. Their early deaths left their nine youngest children, all under the age of 18, orphans.

Archduchess Luise of Austria, Princess of Tuscany, was the wife of King Friedrich August III, the last King of Saxony. She was born in Salzburg, Austria on September 2, 1870, and given the following names – Luise Antoinette Maria Theresia Josepha Johanna Leopoldine Caroline Ferdinande Alice Ernestine. Luise was the second child of Ferdinando IV, the last Grand Duke of Tuscany, and his second wife, Princess Alicia of Bourbon-Parma.

Luise had one half-sister from her father’s first marriage to  Princess Anna of Saxony, who died in 1859:

In her youth, Luise was seen as a potential bride by several foreign royals, including the future King Ferdinand I of Bulgaria, and Prince Pedro Augusto of Saxe-Coburg and Gotha, a grandson of Emperor Pedro II of Brazil, but the spoiled young Luise found no attraction to any of them. Then, in the summer of 1887, she met Prince Friedrich August of Saxony at Pillnitz Castle. in Dresden, Kingdom of Saxony, now in the German state of Saxony. He was the son of the future King Georg of Saxony and Infanta Maria Ana of Portugal. The two fell in love and married in Vienna, Austria on November 21, 1891. They went on to have six children:

Luise and Friedrich August with some of their children, c1901. source: Wikipedia

From the beginning of her marriage, Luise was unhappy. She was unwilling to conform to the strict Saxon court which often caused conflicts with her father-in-law and others in the royal family. However, she was immensely popular with the people of Saxony and often overshadowed other members of the family which further added to their frustration with her. She sought refuge in several affairs, including her children’s French tutor, André Giron. Her affair with Giron was discovered when a telegram she sent him was intercepted.

This was the last straw for her father-in-law, who threatened to have her committed to a mental asylum. With the help of two of her maids, Luise – pregnant with her youngest child – fled Dresden and headed toward Lake Geneva where she met up with her brother, Leopold Ferdinand, before reconnecting with Giron. As news of the scandal reached Saxony, Luise’s in-laws were hurt and embarrassed… and most of all, mad. Almost immediately, King Georg established a special court in order to end the marriage between Luise and Friedrich August. Meanwhile, Luise and Giron stayed in Geneva, often being seeing in public. Their relationship ended just a few days before her divorce was announced on February 11, 1903.

When her daughter Anna Monika Pia was born several months later, the child’s paternity was questioned. After an examination by a maternity doctor from Dresden, he stated that the baby was, in fact, the child of the Crown Prince. Friedrich August willingly acknowledged the child as his own. In July 1903, King Georg granted Luise an allowance and the title Countess of Montignoso. In exchange, he demanded that the child should be brought back to Dresden to be raised with the other children. Luise, of course, refused.

Over the next year, Luise moved frequently, living in France, England, Switzerland, and then Italy. She soon tried to negotiate an increase in her allowance in exchange for returning her daughter. However, at the last minute, she changed her mind.

In September 1907, Luise married for a second time. Her new husband was Enrico Toselli, an Italian musician 12 years younger. They had a son, Carlo, born in May 1908. Soon after this marriage, her first husband found their daughter and had her brought back to Dresden. She also separated from her second husband, and they were divorced four years later.

Luise caused even more of a scandal in 1911 when her memoirs were published, detailing her time in Saxony, her marriage, and her fall from grace. She cast the blame primarily on her father-in-law and the Saxon courtiers who feared her influence when she became Queen. She claimed that the royal family was jealous of her popularity – a fact which is without question. As Crown Princess, Luise was immensely popular with the Saxon people, partially because she refused to conform to the strict etiquette and protocol of the Court. While her book brought her much sympathy and support, it also brought her further rejection. Many – particularly amongst royal circles – felt that she brought disgrace to the monarchy by airing her dirty laundry in such a manner.

After World War I, Luise found herself virtually penniless. She had lost all of her Austrian titles and assets upon her second marriage, and with the end of the Austrian Empire, lost the little financial support that she had continued to receive from a few relatives. She spent some time living in Spain with an uncle before moving to Belgium where she spent the remainder of her life.

The former Crown Princess Luise of Saxony, Archduchess of Austria and Princess of Tuscany died in Brussels, Belgium on March 23, 1947. At the time, she was working as a flower seller to survive. Her urn was placed in the Hedingen monastery in Sigmaringen in the German state of Baden-Württemberg, the traditional burial place of the House of Hohenzollern.