king of Prussia
verifiedCite
While every effort has been made to follow citation style rules, there may be some discrepancies. Please refer to the appropriate style manual or other sources if you have any questions.
Select Citation Style
Share
Share to social media
Facebook Twitter
URL
https://www.britannica.com/biography/Frederick-II-king-of-Prussia
Feedback
Thank you for your feedback

Join Britannica's Publishing Partner Program and our community of experts to gain a global audience for your work!
External Websites
Britannica Websites
Articles from Britannica Encyclopedias for elementary and high school students.
print Print
Please select which sections you would like to print:
verifiedCite
While every effort has been made to follow citation style rules, there may be some discrepancies. Please refer to the appropriate style manual or other sources if you have any questions.
Select Citation Style
Share
Share to social media
Facebook Twitter
URL
https://www.britannica.com/biography/Frederick-II-king-of-Prussia
Feedback
Thank you for your feedback 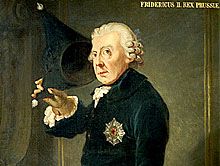 What is Frederick II known for?

Frederick II, king of Prussia (1740–86), was a brilliant military campaigner who, in a series of diplomatic stratagems and wars against Austria and other powers, greatly enlarged Prussia’s territories and made Prussia the foremost military power in Europe.

When was Frederick II born?

When did Frederick II ascend the throne?

Frederick II ascended the throne, becoming the king of Prussia, in 1740, following the death of his father, Frederick William I.

Frederick II, byname Frederick the Great, German Friedrich der Grosse, (born January 24, 1712, Berlin, Prussia [Germany]—died August 17, 1786, Potsdam, near Berlin), king of Prussia (1740–86), a brilliant military campaigner who, in a series of diplomatic stratagems and wars against Austria and other powers, greatly enlarged Prussia’s territories and made Prussia the foremost military power in Europe. An enlightened absolute monarch, he favoured French language and art and built a French Rococo palace, Sanssouci, near Berlin.

Frederick, the third king of Prussia, ranks among the two or three dominant figures in the history of modern Germany. Under his leadership Prussia became one of the great states of Europe. Its territories were greatly increased and its military strength displayed to striking effect. From early in his reign Frederick achieved a high reputation as a military commander, and the Prussian army rapidly became a model admired and imitated in many other states. He also emerged quickly as a leading exponent of the ideas of enlightened government, which were then becoming influential throughout much of Europe; indeed, his example did much to spread and strengthen those ideas. Notably, his insistence on the primacy of state over personal or dynastic interests and his religious toleration widely affected the dominant intellectual currents of the age. Even more than his younger contemporaries, Catherine II the Great of Russia and Joseph II in the Habsburg territories, it was Frederick who, during the mid-18th century, established in the minds of educated Europeans a notion of what “enlightened despotism” should be. His actual achievements, however, were sometimes less than they appeared on the surface; indeed, his inevitable reliance on the landowning officer (Junker) class set severe limits in several respects to what he could even attempt. Nevertheless, his reign saw a revolutionary change in the importance and prestige of Prussia, which was to have profound implications for much of the subsequent history of Europe.

Frederick was the eldest surviving son of Frederick William I, king of Prussia, and Sophia Dorothea of Hanover, daughter of George I of Britain. Frederick’s upbringing and education were strictly controlled by his father, who was a martinet as well as a paranoiac. Encouraged and supported by his mother and his sister Wilhelmina, Frederick soon came into bitter conflict with his father. Frederick William I deeply despised the artistic and intellectual tastes of his son and was infuriated by Frederick’s lack of sympathy with his own rigidly puritanical and militaristic outlook. His disappointment and contempt took the form of bitter public criticism and even outright physical violence, and Frederick, beaten and humiliated by his father, often over trifling details of behaviour, took refuge in evasion and deceit. This personal and family feud culminated spectacularly in 1730, when Frederick was imprisoned in the fortress of Küstrin after planning unsuccessfully to flee initially to France or Holland. Lieutenant Hans Hermann von Katte, the young officer who had been his accomplice in the plan, was executed in Frederick’s presence, and there was for a short time a real possibility that the prince might share his fate. During the next year or more Frederick, as a punishment, was employed as a junior official in local administration and deprived of his military rank. The effects of this terrible early life are impossible to measure with accuracy, but there is little doubt that the violent and capricious bullying of his father influenced him deeply.

In 1733, after a partial reconciliation with his father, Frederick was married to a member of a minor German princely family, Elizabeth Christine of Brunswick-Bevern, for whom he never cared and whom he systematically neglected. In the following year he saw active military service for the first time under the great Austrian commander Eugene of Savoy against the French army in the Rhineland. In the later 1730s, in semiretirement in the castle of Rheinsberg near Berlin and able for the first time to give free rein to his own tastes, he read voraciously, absorbing the ideas on government and international relations that were to guide him throughout his life. These years were perhaps the happiest that Frederick ever experienced. However, his relations with his father, though somewhat improved, remained strained.

Frederick William I died on May 31, 1740, and Frederick, on his accession, immediately made it clear to his ministers that he alone would decide policy. Within a few months he was given a chance to do so in a way that revolutionized Prussia’s international position. The Holy Roman emperor Charles VI, of the Austrian house of Habsburg, died on October 20, leaving as his heir a daughter, the archduchess Maria Theresa, whose claims to several of the heterogeneous Habsburg territories were certain to be disputed. Moreover, her army was in a poor state, the financial position of the Habsburg government very difficult, and her ministers mediocre and in many cases old. Frederick, however, thanks to his father, had a fine army and ample funds at his disposal. He therefore decided shortly after the emperor’s death to attack the Habsburg province of Silesia, a wealthy and strategically important area to which the Hohenzollerns, the ruling family of Prussia, had dynastic claims, though weak ones. The most important threat to his plans was Russian support for Maria Theresa, which he hoped to avert by judicious bribery in St. Petersburg and by exploiting the confusion that was likely to follow the imminent death of the empress Anna. He also hoped that Maria Theresa would cede most of Silesia in return for a promise of Prussian support against her other enemies, but her refusal to do so made war inevitable.

The first military victory of Frederick’s reign was the battle of Mollwitz (April 1741), though it owed nothing to his own leadership; in October Maria Theresa, now threatened by a hostile coalition of France, Spain, and Bavaria, had to agree to the Convention of Klein-Schnellendorf, by which Frederick was allowed to occupy the whole of Lower Silesia. However, the Habsburg successes against the French and Bavarians that followed so alarmed Frederick that early in 1742 he invaded Moravia, the region south of Silesia, which was under Austrian rule. His rather incomplete victory at Chotusitz in May nonetheless forced Maria Theresa to cede almost all of Silesia by the Treaty of Berlin of 1742 in July. This once more allowed Habsburg forces to be concentrated against France and Bavaria, and 1743 and the early months of 1744 saw Maria Theresa’s position in Germany become markedly stronger. Frederick, again alarmed by this, invaded Bohemia in August 1744 and rapidly overran it. However, by the end of the year lack of French support and threats to his lines of communication had forced him to retreat. Moreover, the elector Augustus III (king of Poland and the elector of Saxony) now joined Maria Theresa in attacking him in Silesia. He was rescued from this threatening situation by the prowess of his army; victories at Hohenfriedberg in June 1745 and at Soor in September were followed by a Prussian invasion of Saxony. The Treaty of Dresden, signed on December 25, 1745, finally established Prussian rule in Silesia and ended for the time being the complex series of struggles that had begun five years earlier.

Coffee “beans” are not actually beans. They are seeds that have been dried and roasted. An unprocessed seed planted in the ground could grow into a new coffee tree.
See All Good Facts

Silesia was a valuable acquisition, being more developed economically than any other major part of the Hohenzollern dominions. Moreover, military victory had now made Prussia at least a semigreat power and marked Frederick as the most successful ruler in Europe. He was well aware, however, that his situation was far from secure. Maria Theresa was determined to recover Silesia, and the peace she signed with France and Spain at Aix-la-Chapelle in 1748 allowed her to accelerate significant improvements in the administration of her territories and the organization of her army. Frederick’s alliance with France, which dated from an agreement of June 1741, was based merely on mutual hostility toward the Habsburgs and had never been effective. More serious, anti-Prussian feeling was now running high in Russia, where both the empress Elizabeth, who had ascended the throne in 1741, and her chancellor, Aleksey Bestuzhev-Ryumin, bitterly disliked Frederick. Moreover, Great Britain, under George II, seeking an effective continental ally against France, seemed to be moving closer to Maria Theresa and Elizabeth. In September 1755 Britain signed an agreement with Russia by which Russia, in return for British subsidies, was to provide a large military force in its Baltic provinces to protect, if necessary, the electorate of Hanover, ruled by George II, against possible French or Prussian attack. Frederick was deeply alarmed by this: a hostile Austro-Russian alliance backed by British money seemed to threaten the destruction of Prussia. In January 1756 he attempted to escape from this menacing situation by an agreement with Britain for the neutralization of Germany in the Anglo-French colonial and naval war that had just begun. This, however, deeply antagonized Louis XV and the French government, who saw the agreement as an insulting desertion of France, Frederick’s ostensible ally. The result was the signature in May of a Franco-Austrian defensive alliance. This did not in itself threaten Frederick, but he soon became convinced that a Russo-Austrian attack on him, with French support, was imminent. He determined to forestall his enemies and, in a daring move, invaded Saxony in August 1756 and marched on into Bohemia. This action has been more actively debated by historians than any other event of Frederick’s reign because it raised in an acute form the general issue regarding the morality of preventive military action. Though Frederick took the offensive and thus unleashed a great military struggle, there is no doubt that he was by 1756 seriously threatened, indeed, even more seriously than he himself realized, and that his enemies, most of all the empress Elizabeth, meant to destroy Prussia’s newly won international status.