You have reached the cached page for https://www.yidio.com/movie/pitch-perfect/36667
Below is a snapshot of the Web page as it appeared on 3/6/2021 (the last time our crawler visited it). This is the version of the page that was used for ranking your search results. The page may have changed since we last cached it. To see what might have changed (without the highlights), go to the current page.
You searched for: +Pitch Perfect 3 movie We have highlighted matching words that appear in the page below.
Bing is not responsible for the content of this page.
Pitch Perfect Online - Full Movie from 2012 - Yidio

"Get pitch slapped."
Add to Watchlist

Pitch Perfect is a fine example of how A Capella concerts can be presented on the silvery screen without much interference from a pesky plot line. Most music lovers will enjoy this one as the popular unaccompanied vocal form is showcased along with many new talents. This is primarily a clean cut version of college with only passing mention of troubling topics. Parents should feel comfortable taking mature children to listen as a nearly all white bread cast sings in beautiful harmony. The pitch in Pitch Perfect is that college students are actively engaged in dueling vocals as they belt out choral renditions of several contemporary, as well as a few classic, hits. Pitch Perfect should be number one with a bullet in a perfect world.

Rated PG-13 and having a run time of one-hour-and-52-minutes, this is a movie that is appropriate for the Barbie Doll generation and the date night crowd. There are only hints of panty raid type college behavior when most films featuring this age group have blatant sex scenes. Language includes that word that only a veterinarian is allowed to use in polite society. Basically though, the average person will not find much objectionable about this film. Still though, if the average family includes those who want no bad language or sexuality in their movies, a computer animated film may be preferable.

This film may in fact have such quality vocal performances to be considered a vehicle for such. Front and center performances by unfamiliar faces who release, well, perfect pitch are nonstop elements. High School choir departments will not just flock to see the film; they will probably be ordering the sheet music. Perfect Pitch stays an octave above the rest in a musical sense but struggles like a banshee to avoid a PG rating. That would, obviously, be death at the box office. It succeeds in staying just a hair shy of squeaky clean in plot and situation. That's a fine line to be sure since there are those who say Barbie is too sexy and toy makers have capitalized on that fact for over 50 years.

But the plot is a simple creative difference between factions in a college A Capella group and most viewers will not lose sleep after seeing it. Some elements of bullying are evident but the outcome is sweet music for those weary of too much real life tragedy. It will be hard to leave the theater without singing at least one of the songs from this soundtrack, however. A comedy to be sure but also an amazingly talented list of vocal performances is to be found in Pitch Perfect: a fine tribute to the most challenging musical form, A Capella.

Pitch Perfect is an Comedy, Music, Romance movie that was released in 2012 and has a run time of 1 hr 52 min. It has received moderate reviews from critics and viewers, who have given it an IMDb score of 7.1 and a MetaScore of 66.

Where do I stream Pitch Perfect online? Pitch Perfect is available to watch and stream, download, buy on demand at Hulu, HBO Max, Amazon, Google Play, Microsoft Movies & TV, Apple TV, YouTube VOD, Vudu online. Some platforms allow you to rent Pitch Perfect for a limited time or purchase the movie and download it to your device.

Browse Paramount+!
Browse the latest Paramount+ from with Yidio!
Browse Now
What are you waiting for?
Click here to try for free!
Do you have Paramount+?
No
Yes
Ad
i
Watch All of 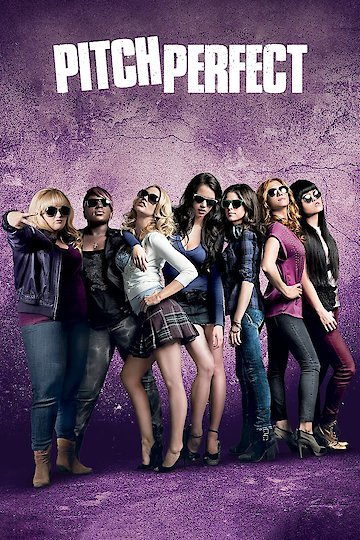 The actress suffered a concussion as the result of a fall.

Banks has taken heat for including some alternative facts about Spielberg in an ill-prepared speech.

The "Pitch Perfect" franchise will be a trilogy!

The first trailer for the sequel reveals some key details about the movie.

Anna Kendrick has signed on to reprise her role as Becca in "Pitch Perfect 2!" What does she have to say about the sequel?

File this one under "of course they are": Pentatonix is going to be in "Pitch Perfect 2!" The "Pitch Perfect" sequel will obviously be needing more acapella talent to face off against the Barden Bellas, and it definitely has it now. Pentatonix has officially shot a scene for the movie, spending a 12-hour day on set performing a yet-to-be-revealed song that they arranged themselves.

'Pitch Perfect' Sequel Set to be Released in 2015

"Pitch Perfect 2" has been officially announced after much speculation, and given the release date of 2015. What do we know about this film so far?

Anna Kendrick went on Letterman to show off a skill she picked up while filming "Pitch Perfect": the ability to make music with a cup.