You have reached the cached page for https://www.amazon.com/Pinochets-Last-Stand-Derek-Jacobi/dp/B007VX02UM
Below is a snapshot of the Web page as it appeared on 7/31/2020 (the last time our crawler visited it). This is the version of the page that was used for ranking your search results. The page may have changed since we last cached it. To see what might have changed (without the highlights), go to the current page.
You searched for: +Pinochet's Last Stand movie We have highlighted matching words that appear in the page below.
Bing is not responsible for the content of this page.
Amazon.com: Pinochet's Last Stand: Derek Jacobi, Phyllida Law, Peter Capaldi, Anna Massey, Michael Maloney: Movies & TV 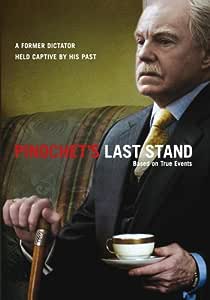 In 1973, General Augusto Pinochet overtook Chile in a violent military coup. During his 17-year rule, he ruthlessly repressed all opposition to his regime, leading to the deaths of 3,000 civilians and the torture of another 30,000. HBO Films presents the fascinating true story of the former dictator's surprise 1998 arrest for crimes against humanity while undergoing back surgery during a vacation in London. Caught in international conflict, Pinochet's (Emmy Award winner Derek Jacobi) time in London forever changed his life - and the prospects for dictators across the globe.

3.3 out of 5 stars
3.3 out of 5
9 customer ratings
How does Amazon calculate star ratings?
Amazon calculates a product’s star ratings based on a machine learned model instead of a raw data average. The model takes into account factors including the age of a rating, whether the ratings are from verified purchasers, and factors that establish reviewer trustworthiness.
Top Reviews

A Sociologist
3.0 out of 5 stars Not quite the Pinochet that is perceived by most Chileans
Reviewed in the United States on August 28, 2015
Verified Purchase
I'm giving this book 3 stars because even though the movie does make fair historical points, Pinochet is portrayed as a fairly refined man which is completely out of character. As a Chilean that is very familiar with the culture, he was a man that lacked manners, he was quite uncultured and unrefined. To be fair with this production, he was quite arrogant and felt untouchable as depicted here, but his manners were rather vulgar, not elegant as presented here. He lacked the critical thinking of an intellectual, and his speeches were very simple minded and contradictory. It is very typical in Chile to make fun of him for the rather unpolished way he speaks and his uncultured ways. The production of this work, didn't seem to grasp the real Pinochet, maybe due to a lack of understanding Chilean culture. Without trying to fall into stereotyping, this production presents a rather European version of Pinochet.
Read more
6 people found this helpful
Helpful
Comment Report abuse

Edwin C. Pauzer
VINE VOICE
3.0 out of 5 stars Would I Want to Watch it Again?
Reviewed in the United States on August 14, 2008
Verified Purchase
This is a historical recounting of Augusto Pinochet's last trip abroad (to Great Britain), where he was placed under house arrest for a year and a half while being considered for extradition to Spain to stand trial for war crimes.

Expatriate Chileans are just itching for the man code-named "the gentleman" to arrive in the United Kingdom so they can have him detained by the court. When he does, they get their wish.

One thing that stands in the way of turning him over is that Britain did not adopt laws against torture on foreign soil until 1988. Any torture committed before then cannot be considered.

While the British Chileans explore every judical loophole to have Pinochet account for his crimes, the former dictator's lawyers mount a professional defense, and pressure on the home secretary to release him is intense. That includes pressure from the United States, Tony Blair, and the Vatican.

Into the mix comes a visit from Lady Thatcher, former prime minister of Great Britain, who gushes over the man as the "Savior of Chile." (This was the one surprise to me in the whole film, that Margaret Thatcher would have even considered the company of a mass murderer).

The Chileans too keep up the pressure, but in the end he is able to play the fool and be judged medically and psychologically incapable of standing trial. Pinochet returns to Chile, where he discards his walker after deplaning, and continues unattended.

The short drama lacks the same despite the superb acting of Derek Jacobi who plays in the title role, with a supporting cast that is top-drawer. It is the acting that carries a sparse storyline, and nudges it to the three star mark. The bottom line is the question, would I want to sit down and watch this again?

The answer is unfortunately, no.

Manfred Tatzmann
5.0 out of 5 stars Pinochet video a historical must see
Reviewed in the United States on May 25, 2014
Verified Purchase
Excellent! A must see for anyone interested in the turmoil that engulfed Chile in the 70's. Provides an insight into the complicity of world power brokers.
Read more
Helpful
Comment Report abuse

JORGE O . SVOBODA
5.0 out of 5 stars Pinochet's Last Stand
Reviewed in the United States on April 17, 2012
Verified Purchase
Of all the movies made about General Pinochet this is the fairest of them all. It is far from being accurate and does not include a good presentation of why Pinochet and the other chiefs of the armed forces had to take action. We had nothing to eat, the seeds for planting new crops had been consumed by hungry mobs, the bulls and cows had been slaughtered, the housewives were marching with pots and pans demanding action from the military,the truckers had stop delivering goods because there was nothing to deliver, the armed forces quarters were painted with blue grafitti so men could come out instead of girls where the pink colors was shown. Castro had thousands of cuban soldiers and aids helping Allende to destroy the Constitution,etc, etc. My parents were there, my cousins, my friends and many others. The Comunist/ Socialist propaganda is formidable and they are doing it again. What is the matter with the memory of all Chileans that went through HELL during Allende's government. He destroyed the country and the proof is that ALL the policies enacted during Pinochet's period are still in place, furthermore they have created the most prosperous country of Latin America. Eventually the TRUTH will prevail. Margaret Thatcher was right in admiring him and counting him as a trusted friend. He was a patriot and if you do not believe it, you go and visit the Cuban Paradise created by Castro. Castro has been in power as an absolute Dictator for over 50 years, Pinochet fixed Chile and then he called for free elections to elect the next President under the new Constitution.
There is no blinder person than the one who does not want to see. Open your eyes and stop lying to yourselves.
Read more
10 people found this helpful
Helpful
Comment Report abuse

Nathan Road
1.0 out of 5 stars Complete garbage
Reviewed in the United States on December 31, 2012
This movie is complete garbage. Pionchet, his wife and Margaret Thatcher were all portrayed as buffoonish cartoon characters. Those trying to get Pinochet extradited were portrayed as lofty-minded, conscious-driven individuals. It's like Greek dramas where characters either wore a happy face or sad face.

Why anyone wouldn't try making a remotely credible docudrama with believable characters is beyond me. The makers were spoon-feeding their views to the audience as if the facts just weren't enough.
Read more
5 people found this helpful
Helpful
Comment Report abuse
See all reviews from the United States

Amazon Customer
5.0 out of 5 stars Augusto and Margaret
Reviewed in the United Kingdom on August 30, 2013
Verified Purchase
doesn't show all that this devious duo got up to, we might never know ALL of that but it is a start........
Read more
Helpful
Sending feedback...
Thank you for your feedback.
Sorry, we failed to record your vote. Please try again
Report abuse