definition - otto i count of burgundy

Otto I, Count of Burgundy

Otto I (between 1167 and 1171 – 13 January 1200) was Count of Burgundy from 1190 to his death and briefly Count of Luxembourg from 1196 to 1197. He was the fourth son of Emperor Frederick I Barbarossa by his second wife Countess Beatrice I of Burgundy, heiress of Count Renaud III.

Upon the death of his mother in 1184, his father granted him the Burgundian county, elevating him to the rank of a Count palatine (Freigraf). Haughty Otto however soon entered into several feuds: not only with the Anscarid lords of Auxonne and Mâcon, who claimed late Beatrice's heritage, but also with the Counts of Montbéliard, the French Duke Odo III of Burgundy and Duke Berthold V of Zähringen. In the course of negotiations in 1195, he killed Count Amadeus of Montbèliard with his own hands, followed by the assassination of Alsatian Count Ulric of Ferrette in 1197 and the execution of a brother of Konrad von Hüneburg, Bishop of Strasbourg, in 1198. 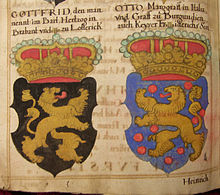 When Count Henry IV of Luxembourg died without heirs in 1196, his county escheated to the Emperor and Henry VI enfeoffed his brother Otto. Count Theobald I of Bar, who had married Ermesinde, daughter of late Count Henry IV, negotiated the renunciation of Luxembourg with Otto the next year.

Meanwhile Count palatine Otto's regional conflicts had become a severe threat to the power politics of his Hohenstaufen relatives. After Philip of Swabia had been elected King of the Romans in 1198, rivaling with the Welf duke Otto of Brunswick, he tried to settle the numerous quarrels picked by his brother. In 1200 Otto was assassinated at Besançon, his death came in useful to many political actors.

Otto was buried at St Stephen's Cathedral, today the site of the Citadel of Besançon.

Otto had married Margaret, daughter of Count Theobald V of Blois, in 1190. After her husband's death her brother-in-law King Philip enfeoffed her with the Burgundian county, as regent for her minor daughter Joanna. Upon Joanna's death in 1205, Otto's second daughter, Beatrice, became countess and Philip married her to Duke Otto I of Merania.

All translations of otto i count of burgundy