You have reached the cached page for https://www.viator.com/Bavaria-attractions/Oberammergau/d5203-a18915
Below is a snapshot of the Web page as it appeared on 1/17/2021 (the last time our crawler visited it). This is the version of the page that was used for ranking your search results. The page may have changed since we last cached it. To see what might have changed (without the highlights), go to the current page.
You searched for: +Oberammergau Bavaria We have highlighted matching words that appear in the page below.
Bing is not responsible for the content of this page.
The 5 Best Oberammergau Tours & Tickets 2021 - Bavaria | Viator
Welcome to Viator!
By creating an account, you agree to our Terms & Conditions and Privacy Policy.
We're creating your account. This may take a few seconds...
Account creation successful! Thank you.
Something went wrong. Please try again on the sign up page.
Questions? (888) 651-9785(888) 651-9785

Learn more about our Covid-19 response. 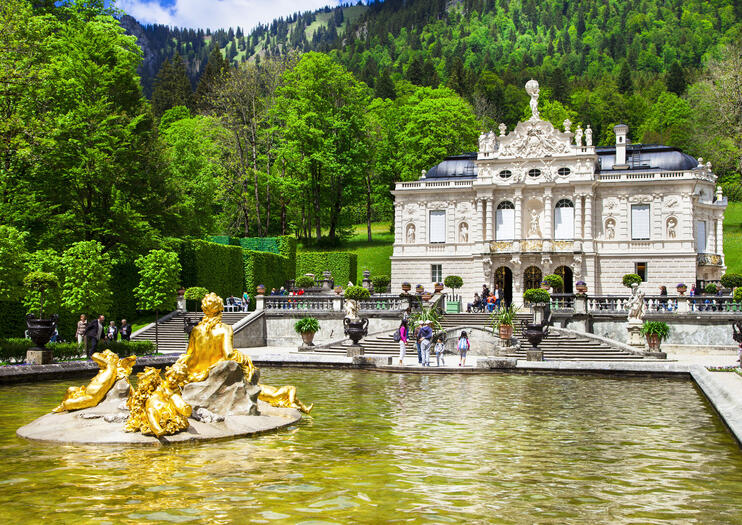 Overview
Among the most scenic historic towns in the Bavarian Alps, Oberammergau is known for its traditional wood carving and the colorful frescoes that adorn its centuries-old buildings. However, the town’s biggest claim to fame is the Passion Play—held every 10 years and dating to 1634, the performance tells the story of Jesus’ last days.

The Basics
Rich in culture, history, and nature, Oberammergau is located in a verdant valley between Munich and the Austrian border. The Passion Play is the town’s big draw. Legend has it that the town was spared from the worst effects of the bubonic plague after a resident vowed to perform a play depicting the Passion of the Christ every 10 years. The tradition has persisted ever since.

If you’re a culture geek, check out the frescoes, the Oberammergau Museum, and the Pilatushaus, where artisans demonstrate the town’s wood carving techniques. Oberammergau features on numerous day trips from Munich—some itineraries include stops at nearby attractions such as Linderhof Palace and Ettal Abbey. The town is also popular with hikers and winter sports enthusiasts. And don’t forget to sample Bavarian delicacies like bratwurst, sauerkraut, and apple strudel.

Things to Know Before You Go
How to Get There
To get to Oberammergau from Munich (the closest major German city), take the train to Murnau, then transfer to the regional train to Oberammergau—about a 2-hour journey. If you’re driving from Munich, take the A95. The town is also a quick road trip from Innsbruck, Austria.

When to Get There
Oberammergau is busiest during Passion Play years. If you’re there in an off year, there’s no bad time to explore.

How to Attend the Oberammergau Passion Play
Oberammergau’s Passion Play dates to the 17th century, and attracts some 500,000 visitors to its stagings. As the play is held only once a decade (in years ending in a 0), it’s worth making plans in advance. Performances happen roughly 100 times between May and October, and you can purchase tickets and 2- or 3-day packages online.
Address: Oberammergau 82487, Germany
Read MoreShow Less

7 Tours and Activities to Experience Oberammergau

Search experiences that may have limited interaction with crowds.

Clear all
Apply
Select Dates
Today
Tomorrow
Price & Deals
$
$
Time
Time of DayDuration
Rating
More
Search experiences that may have limited interaction with crowds.
Did you know?You can reserve your spot today and pay when you're ready.
Learn more
Did you know?
You can reserve your spot today and pay when you're ready.Learn more
Reserve Now & Pay Later
We'll reserve your spot today, and you can cancel up to two days* before your experience without making a payment. Secure your spot with ease, stay flexible, and never miss out.
How it works
Find your experience
Choose the experience you want knowing you can secure your spot without being locked in.
Make a reservation
Reserve now and pay later to secure your spot, commitment-free.
Choose when to pay
Come back to pay once your plans are set, or let auto-pay kick in two days* before your experience.
Enjoy your experience
Now you're all set! Have a great time.
Frequently Asked Questions  | Terms & Conditions
*Up to 9 days depending on the booking/product
Sort by:Featured
Featured
Traveler Rating
Price (Low to High)
Price (High to Low)
Duration (Short to Long)
Duration (Long to Short)
New on Viator

47
Escape into the Bavarian countryside—and visit two of Germany’s highlight castles in one day—on this hassle-free coach tour from Munich. Set off in the early morning, and learn about King Ludwig II, who built numerous palaces during his reign. This flexible experience lets you choose whether you want to pay for admission to one or both palaces: Linderhof and Neuschwanstein. You’ll also have time for a traditional Bavarian lunch (own expense).
…More
From
$64.29
From
$64.29
Face masks required for travelers in public areas
Face masks required for guides in public areas
Face masks provided for travelers
Learn More
Taking safety measures

9
Spend the day exploring Munich’s enchanted surroundings with your own private guide and vehicle. Visit the popular sights of the Ettal Monastery, the village of Oberammergau, the opulent Linderhof Palace, and finish the day with a guided tour of the famous Neuschwanstein Castle. Discover the rich history of Bavaria and get insider tips from your informative guide during this private tour.
…More
From
$1,071.49
per group
From
$1,071.49
per group

HALF DAY TOUR, with GAP, ETTAL, OBERAMMERGAU from GARM-PARTENKIRCHEN.

THE EU BORDERS ARE NOW OPEN! THE TICKET WILL COVER 1-5 PEOPLE! ONLY ORDER FOR 1 PERSON! This is a rare opportunity to visit Oberammergau with somebody who is a Native English speaker and has lived in the area for 40 years, 15 of them in Oberammergau and I have worked for former main Passion Play personalities. The Play permeates the whole of village life, the Village is the Passion Play! I was a waiter here and some Tour Guides wrongly think that it was a British waiter working in Oberammergau who stole the Madonna from Ettal Monastery, it wasn´t me! We can change the Tour to make use of very good weather, this might include more charges if the distances and times change dramatically. It is YOUR TOUR, you decide on what you might like to see, there is also the Alpine Coaster in Oberammergau if you have kids, or the Ehrenberg Ensemble on the other side in Tyrol, you can make it a day to remember! I hope to see you soon! Chris Edwards
…More
From
$479.33
From
$479.33
Face masks required for travelers in public areas
Face masks required for guides in public areas
Face masks provided for travelers
Learn More
Taking safety measures

VIP tour to the royal castles Neuschwanstein and Linderhof from Munich

2
See Neuschwanstein Castle’s fairytale turrets and Linderhof Castle, inspired by Versailles, on this convenient day trip from Munich, with snacks and soft drinks on board. It’s almost impossible to see both castles in a day on public transport, but this tour delivers, with a stop at a viewpoint to capture the perfect Neuschwanstein photo too. A live guide tells fascinating tales of Mad King Ludwig and so much more.
…More
From
$170.19
From
$170.19
Face masks required for travelers in public areas
Face masks required for guides in public areas
Face masks provided for travelers
Learn More
Taking safety measures

A Full Day Private Tour of Neuschwanstein Castle from Garmisch-Partenkirchen

29
Discover mystery and beauty in the heart of Bavaria on this private full-day Neuschwanstein Castle tour. Head past the entry queues and go straight inside Neuschwanstein Castle with a guide to begin exploring. Admire the 19th-century fortress’ Romanesque architecture and gain insight into the life of King Ludwig II of Bavaria — one of the castle’s most famous residents. Explore the pretty Bavarian village of Oberammergau and learn of its rich heritage, then visit Ettal Abbey before heading back to your hotel in comfort.
…More
From
$369.21
From
$369.21

THE VIATOR TICKET IS GOOD FOR 1-5 PEOPLE! This Tour is specially designed for those who don´t want to climb up or down 300 steps or get crushed at Neuschwanstein by the crowds. WE DO NOT VISIT NEUSCHWANSTEIN CASTLE! This is a leisurely Tour with no great distances between the attractions but lots to see in a relaxed manner, no standing in queues, more time for sightseeing and photos. This Tour can be booked at short notice, but at least a day is recommended, nobody else as far as I know offers this alternative of a Tour of both GARMISCH-PARTENKIRCHEN and TYROL? I hope to see you very soon! Best Regards, Chris Edwards PS! I am a Fully Licenced and Insured Taxi Company for Germany and the EU. ``LIFE IS TOO SHORT TO TAKE A BUS!´´ Or wait for hours in a Queue!
…More
From
$786.60
per group
From
$786.60
per group
Face masks required for travelers in public areas
Face masks required for guides in public areas
Face masks provided for travelers
Learn More
Taking safety measures

4
Visit three of Bavaria's most beguiling castles on a private day trip from Munich. Formerly the castles of the eccentric King Ludwig II, Neuschwanstein, Hohenschwangau, and Linderhof are loved by visitors around the world for their fairy tale architecture and mountain settings. Explore them with your own private guide, enjoy coffee breaks to break up the history, and travel in comfort with round-trip transportation from your Munich hotel.
…More
From
$1,197.54
per group
From
$1,197.54
per group

Things to do near Bavaria