RHOSLC’s Lisa Barlow Pays Homage to Cameron After His Passing and Fires Back at Whitney, Plus Meredith Looks Back on Mary’s Ex Parishioner’s “Unsettling Cryptic Remarks” 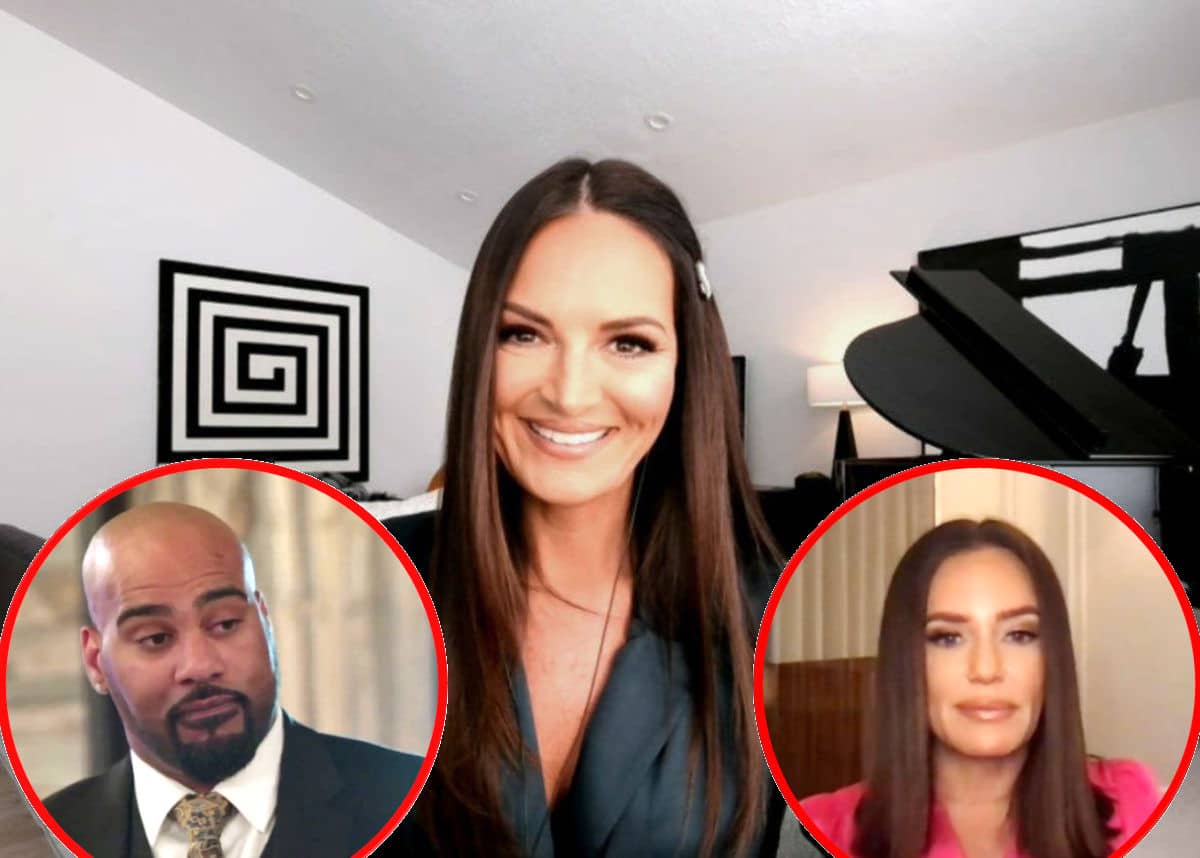 After Cameron suggested Mary and her husband, Robert Cosby Sr., did awful things during the time he spent at their church and encouraged her to “be careful,” Lisa honored him on Instagram as Meredith looked back on his “unsettling cryptic remarks” on Twitter.

“This was taken the day before Cameron left to go home to celebrate his birthday in Chicago. I had no idea it would be the last time I saw Cameron. He loved building, helping, growing and has been an amazing brother to me. We love you Cameron,” Lisa wrote in her post.

“He is accomplished, kind, smart, creative- a leader and my friend: He is loved. He will be missed. Proud to call you my friend and brother,” she continued.

Looking back at the RHOSLC episode, which featured an event for sons Jack and Henry’s grooming line, Fresh Wolf, Lisa said on Twitter that the bash was important to their family because it raised proceeds for foster care.

“My kids event was beyond important to our family. Cameron was on the board of Utah Foster Care. Cameron was my great friend and passed away,” she explained. “Please read about him and all the amazing things he did in his short time on earth.”

Meanwhile, her co-star, Meredith, mentioned Cameron’s “unsettling cryptic remarks” on her own page, leading Lisa to defend her late friend.

“Gotcha, sorry for your [loss]. I just get Merediths side of it too, if someone was hinting, I would be like umm what happened?! But I also understand how it was your families event so like wrong place to dive in on the topic, hopefully more is unfolded,” a fan wrote. 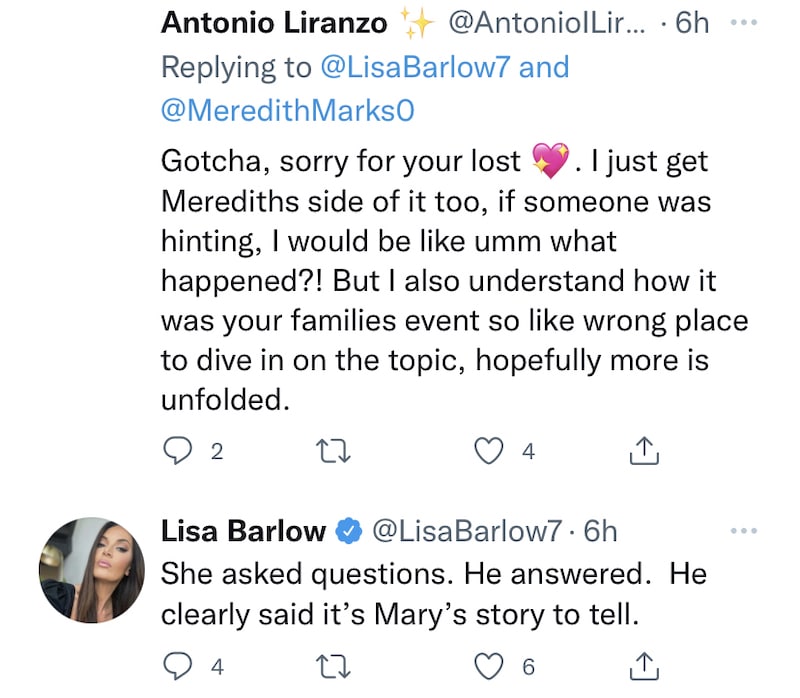 After seeing the post, another fan told Lisa and Meredith not to argue.

“Girlies don’t do this to us. Work it out, talk it out,” they encouraged.

“Me and Meredith are great,” Lisa confirmed. “I just want to make sure we are respectful about someone who is no longer with us. He was on the Board of Utah Foster and a really great human. It’s not fair for him to not be here to speak for himself. He was a great friend.” 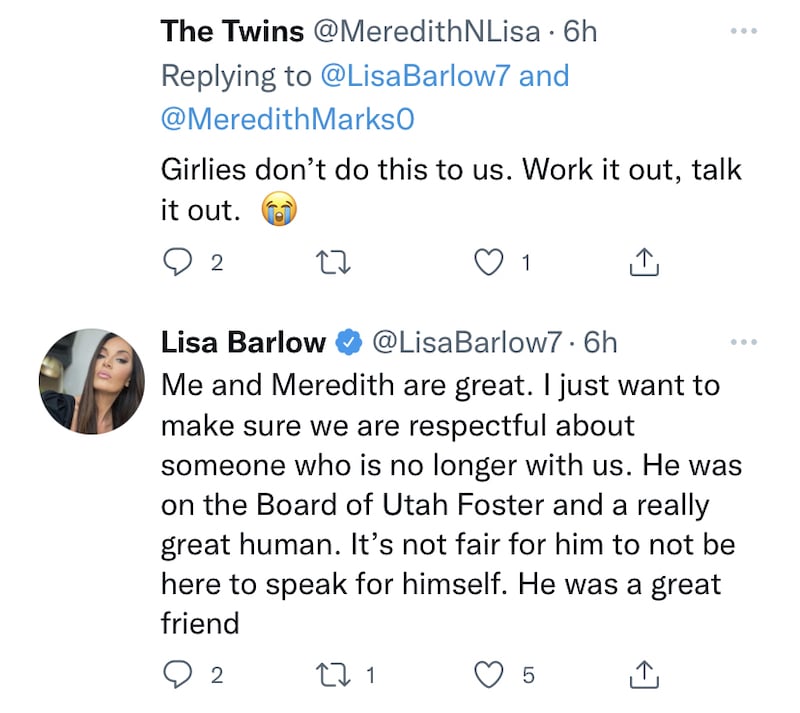 Lisa also responded to Meredith’s claims regarding Cameron’s “unsettling cryptic remarks” after a fan suggested they were the doing of Lisa.

“You can blame [Lisa Barlow] for all of that! She’s up to something always,” the person wrote.

But Lisa chose to put the spotlight on do-gooder Cameron rather than take the blame for the recounting of his experience at Mary’s church.

“Cameron is no longer with us BUT he was on the board of [Utah Foster Care],” she shared. “He was my great friend and a major help to our community. My kids event was amazing.” 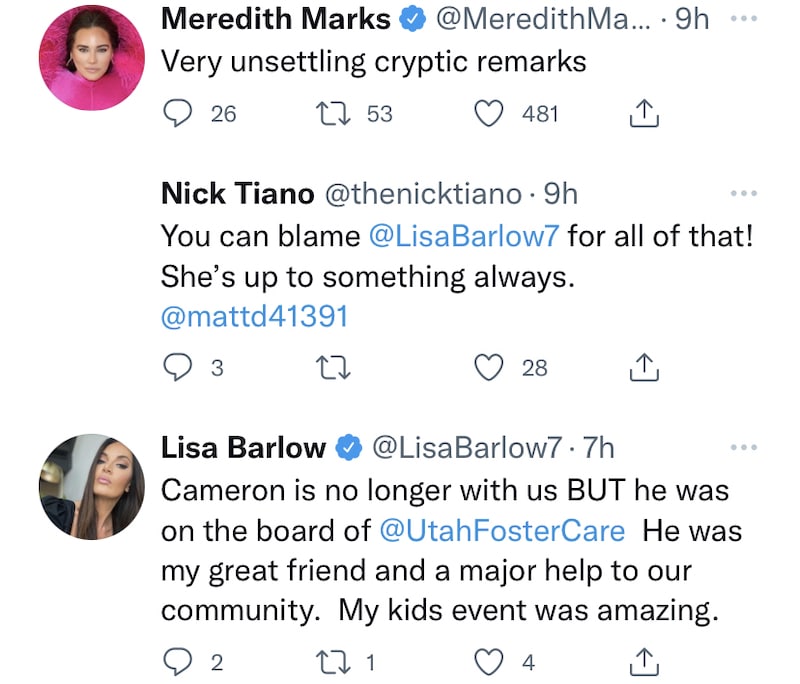 Also on Twitter, Lisa took aim at Whitney Rose after suggesting she wasn’t a real friend to Jen Shah on the show because she had sent a gift to the designer she feuded with months ago. As viewers have seen, Lisa and Whitney have been feuding over “caterer gate” for weeks. However, it was Whitney who was invited to her Fresh Wolf event while Jen was not.

“The lies are so unreal. Post receipts!! You have NONE. Keep working on your PHD!” she tweeted.

Reality Blurb was created to bring readers the latest and up to date reality TV news, updates and exclusive interviews. We cover an array of reality shows as well as reality television stars.