You have reached the cached page for http://www.unofficialroyalty.com/april-14-daily-featured-royal-date/
Below is a snapshot of the Web page as it appeared on 10/22/2020 (the last time our crawler visited it). This is the version of the page that was used for ranking your search results. The page may have changed since we last cached it. To see what might have changed (without the highlights), go to the current page.
You searched for: +Marie of Saxe-Altenburg wikipedia We have highlighted matching words that appear in the page below.
Bing is not responsible for the content of this page.
Marie of Saxe-Altenburg, Queen of Hanover | Unofficial Royalty

Marie of Saxe-Altenburg with her daughter Marie, Photo Credit – Wikipedia

Born on April 14, 1818, in Hildburghausen, Duchy of Saxe-Hildburghausen, now in the German state of Thuringia, Marie was the eldest daughter of the six daughters of Joseph, Duke of Saxe-Altenburg and Amalie of Württemberg.  She was given a long string of names: Alexandrine Marie Wilhelmine Katharine Charlotte Theresia Henriette Luise Pauline Elisabeth Friederike Georgine.  Marie was born as a Princess of Saxe-Hildburghausen, but in 1826 she became a Princess of Saxe-Altenburg due to a transfer of territories within her family.

In 1839, Marie met Crown Prince George of Hanover at Schloss Monbrillant, a summer palace of the Hanovers.  George was the son of Ernest Augustus, the fifth son of George III of the United Kingdom, who had inherited the throne of Hanover upon the accession of his niece Victoria in 1837.  Up until the point, Hanoverian kings of the United Kingdom were also Electors or Kings of Hanover.  However, Hanover followed the Salic Law which did not allow female succession.  Ernest Augustus, as the eldest surviving male, became King of Hanover.

Crown Prince George was totally blind, having lost the sight in his left eye due to illness when he was ten years old and the sight in his right eye due to an accident four years later.  There were some doubts about his ability to be king due to his blindness, but his father decided to keep him in the line of succession.  Marie and George were married on February 18, 1843. 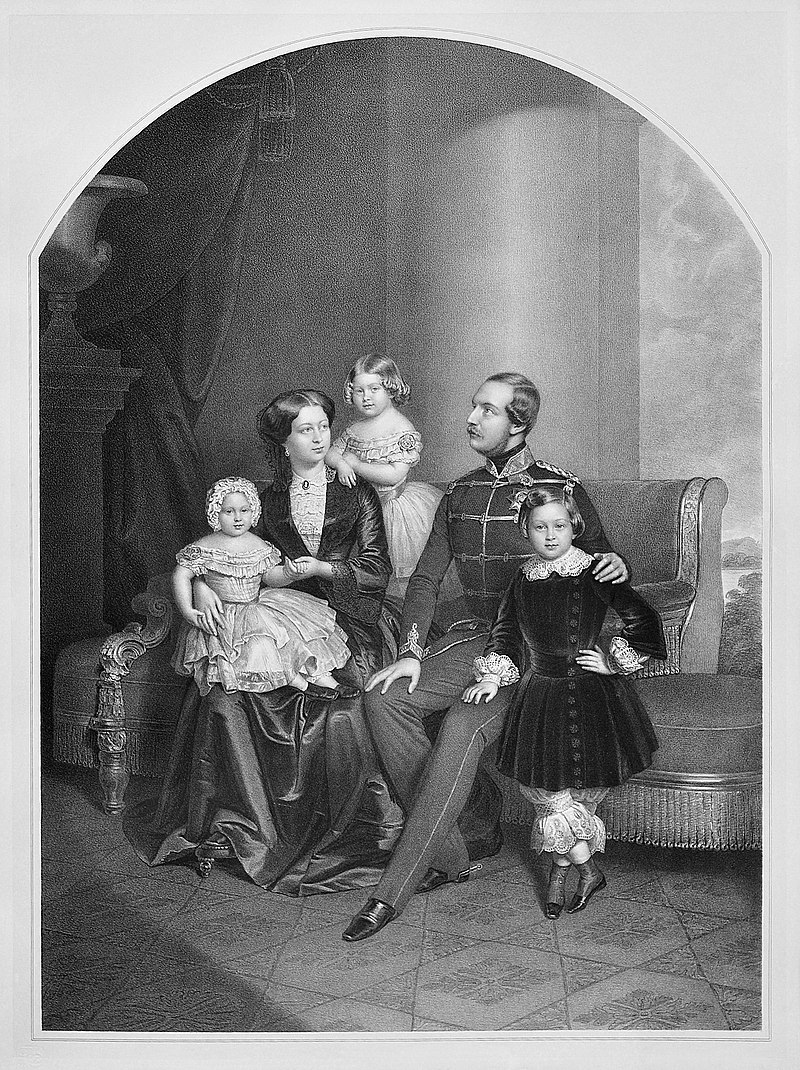 Marie and her family; Credit – Wikipedia

George succeeded his father as King of Hanover and Duke of Brunswick-Lüneburg, as well as Duke of Cumberland and Teviotdale, in the Peerage of Great Britain, and Earl of Armagh, in the Peerage of Ireland, on November 18, 1851, and Marie assumed the female counterparts of the styles and titles.  George V of Hanover reigned for only 15 years, being exiled from Hanover in 1866 as a result of his support for Austria in the Austro-Prussian War.  On September 20, 1866, Hanover was annexed by Prussia. George never abdicated from the throne of Hanover and he and Marie lived in exile at Gmunden, Austria, until his death in 1878. After George’s death, Marie continued living in the Villa Thun in Gmunden which became known as the Queen’s Villa and is still owned by the House of Hanover.  She died on January 9, 1907, and was buried in the mausoleum at Schloss Cumberland in Gmunden, Austria.  Through her son Ernst Augustus, Marie is the ancestor of former King Constantine I of Greece, his sister Queen Sofia of Spain, and Prince Ernst Augustus of Hanover (husband of Princess Caroline of Monaco).