listen) (German: Beuthen) is a city in Silesia in southern Poland, near Katowice. The central-western district of the Upper Silesian Metropolitan Union - metropolis with the population of 2 millions. Bytom is located in the Silesian Highlands, on the Bytomka river (tributary of the Kłodnica).

The city belongs to the Silesian Voivodeship since its formation in 1999. Previously it was in Katowice Voivodeship. Bytom is one of the cities of the 2,7 million conurbation - Katowice urban area and within a greater Silesian metropolitan area populated by about 5,294,000 people.[1] The population of the city is 183,251 (June 2009).[2] Bytom is home of Polonia Bytom, plays in Ekstraklasa since 2007-2008 season and won it twice in 1954 and in 1962.

One half of the coat of arms of Bytom depicts a miner mining coal, while the other half presents a yellow eagle on the blue field - the symbol of Upper Silesia.

Bytom is one of the oldest cities of Upper Silesia, having been known as Bitom in 1136 and Beuthen since 1440. It received city rights from prince Władysław in 1254 with its first centrally located market square. The city of Bytom benefited economically from its location on a trade route linking Kraków with Silesia from east to west, and Hungary with Moravia and Greater Poland from north to south. The first Roman Catholic Church of the Virgin Mary was built in 1231. In 1259 Bytom was raided by the Mongols. The Duchy of Opole was split and in 1281 Bitom became a separate duchy, since 1289 under overlordship and administration by the Kingdom of Bohemia. Due to German settlers coming to the area, the city was Germanized. It came under control of the Habsburg Monarchy of Austria in 1526, which increased the influence of the German language. The city became part of the Kingdom of Prussia in 1742 during the Silesian Wars and part of the German Empire in 1871. In the 19th and the first part of the 20th centuries, the city rapidly grew and industrialized. Before 1939, Beuthen, along with Gleiwitz (now Gliwice), was at the southeastern tip of German Silesia. During World War II, the Beuthen Jewish community was liquidated via the first ever Holocaust transport to be exterminated at Auschwitz-Birkenau.

In 1945 the city was transferred to Poland as a result of the Potsdam Conference. Its German population was largely expelled by the Polish and Soviet armies, and populated with repatriated Poles from the eastern provinces annexed by the Soviets. Some of the indigenous Silesian population remained.

In the post-war period the city did not experience significant investments. Bytom is now a typical Polish post-industrial city. The majority of its coal mines are now closed, while its steel mills are slowly fading. The city is struggling to transform its economic profile from industry to services. Bytom cooperates with two cities with more or less the same problems: Recklinghausen in Germany, and Butte-Silver Bow, United States. The city has a considerable unemployment rate which is centered in the poorest part of the city, the Bobrek subdivision.

Trade is one of main pillars of the economy of Bytom. Being the city with long traditions of commercial trade, Bytom is well fulfilling its new postindustrial role. In the centre of Bytom, and mainly around the Station street and the Market Square, there is the biggest concentration of registered shop owners operating in the county. In spring of 2010, 60 metres from the Market Square - on a new square between the square of Kościuszko and Jainty, Piekarska and Dzieci Lwowskich streets - a new commercial and entertainment centre called "Agora" opened, built by the Scandinavian company Braaten&Pedersen. Once completed, it was to be purchased for 263 million zloty by the British company First Property Group. Moreover, 3 other new shopping centres and 3 hypermarkets operate in Bytom.

In 2007, Bytom and its neighbours created the Upper Silesian Metropolitan Union, the largest urban center in Poland.

Panorama of the market square in Bytom 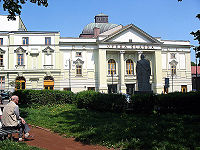 The Confederation of Silesia

Bytom is a place where The Confederation of Silesia - Polish Bonapartists origins.

Nathan Kaufmann(1921-2010), Jewish educator and a pioneer in Israel

All translations of BYTOM