You have reached the cached page for https://www.britannica.com/biography/Maria-Mitchell
Below is a snapshot of the Web page as it appeared on 11/27/2020 (the last time our crawler visited it). This is the version of the page that was used for ranking your search results. The page may have changed since we last cached it. To see what might have changed (without the highlights), go to the current page.
You searched for: +Maria We have highlighted matching words that appear in the page below.
Bing is not responsible for the content of this page.
Maria Mitchell | Biography & Accomplishments | Britannica
Maria Mitchell
Article Media Additional Info

Mitchell was born to Quaker parents who encouraged her education. She attended schools on her native Nantucket, Massachusetts, including the one conducted by her father. Her interest in astronomy was stimulated by her father, who let her assist in his work of rating chronometers for the Nantucket whaling fleet and who encouraged her independent use of his telescope. From 1836 to 1856 she worked as a librarian in the Nantucket Atheneum during the day (often acting as an informal teacher) and became a regular observer of the skies at night.

In October 1847 Mitchell succeeded in establishing the orbit of a new comet, which became known as “Miss Mitchell’s Comet.” The discovery gained her immediate recognition in scientific circles; the following year she became the first woman elected to the American Academy of Arts and Sciences. In 1849 she was appointed a computer for the American Ephemeris and Nautical Almanac, and the next year she was elected to the American Association for the Advancement of Science. A gift of a large equatorial telescope was arranged by a group of prominent American women led by Elizabeth Peabody in 1858. Mitchell’s accomplishments were subsequently kept in the public eye by feminists, and from 1857 to 1858 she traveled in Europe, meeting many leading scientists. In 1861 she moved with her widowed father to Lynn, Massachusetts.

Reluctantly, but encouraged by her father, Mitchell accepted an appointment in 1865 to Vassar Female College (later Vassar College), which opened that year in Poughkeepsie, New York. As director of the observatory and professor of astronomy there, she was, in those early days, the most prominent member of the faculty. Several of her students, who included Christine Ladd-Franklin and Ellen Swallow (Richards), later testified to the great influence she had as a teacher and as an example.

Mitchell pioneered in the daily photography of sunspots; she was the first to find that they were whirling vertical cavities rather than clouds, as had been earlier believed. She also studied comets, nebulae, double stars, solar eclipses, and the satellites of Saturn and Jupiter. Elected to the American Philosophical Society in 1869, she helped found the Association for the Advancement of Women (AAW; 1873) and served as its president (1875–76). Her involvement in the AAW reflected Mitchell’s support of women’s rights, including suffrage. She retired from Vassar in failing health in 1888 and died the next year.

The Editors of Encyclopaedia Britannica This article was most recently revised and updated by Amy Tikkanen, Corrections Manager.

History at your fingertips
Sign up here to see what happened On This Day, every day in your inbox!
Thank you for subscribing!
Be on the lookout for your Britannica newsletter to get trusted stories delivered right to your inbox.
Maria Mitchell
Quick Facts 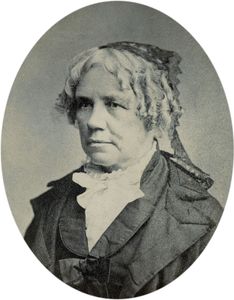